Just an FYI folks. I was at Harbor Freight yesterday and while looking for something else I noticed their Predator 2000 watt 65 dB generators for only $450 with coupon which is good till the end of the month. I bought a Honda last year, but may have chosen one of these at less than half the price if I had known. I shopped Home Depot and Lowe’s but after comparing them spent the extra $$ for the Honda.

Just an FYI folks. I was at Harbor Freight yesterday and while looking for something else I noticed their Predator 2000 watt 65 dB generators for only $450 with coupon which is good till the end of the month. I bought a Honda last year, but may have chosen one of these at less than half the price if I had known. I shopped Home Depot and Lowe’s but after comparing them spent the extra $$ for the Honda.

I just did a periodic run of my Predator 2000.  Ran great.  Need to change the oil and it will be ready.  I bought it for the last Winter Star Party.  The Honda’s are great if you can afford them.  However, if you can’t justify spending that much the Predators are a great, much cheaper alternative.  Jim, I had the tent next to your teardrop.  Could you hear much difference in the sound of our generators?

Excited to be attending my second WSP.  I was hoping the electricity would have been sorted by now but understand that's not in our control.  I purchased a Ryobi generator last year for WSP and shared it with my neighbors and that worked out quite well.  I haven't used it since so thanks for the reminder Napp to check it out prior to the trip down. Will be doing the Amtrak AutoTrain again from Virginia as that allows me to load up my Jeep to the brim

Looking forward to seeing everyone.

Jim, I had the tent next to your teardrop.  Could you hear much difference in the sound of our generators?

Are you guys at the WSP allowed to run generators at night?!

Yes, only because there is no power on the main field in the girl scout camp. I'm assuming that will change once power is restored in the future.

Kind of quiet here. Looking forward to some sunny weather and warmer temps. I've been getting stuff ready and more or less got my teardrop ready to go. I shaved a bunch of weight by not packing my "library" of observing books this year. I'm also only bringing one telescope, in past years I brought more of them but they never get used.

I also took my 2012 minivan into the dealer to get some electrical problems looked into. Did you know the car makers, or at least Chrysler, use wiring harnesses in which the insulation is made out of a soy derivative that mice like to eat? Now I realize the car is eight years old and has a lot of highway miles on it but they want $4500 to fix everything and it'll still be a eight year old used-up car with a ton of miles. I think I may cut my losses and get something else. Dang, I hate shopping for vehicles, especially unexpected ones.

I've been searching for a speaker list and all I was able to find was a vendor list.  Any info out there on speakers/daily schedules?

TIA while eagerly counting down these next 16 days......

Two weeks from now we'll be in waiting in line.

If anyone's interested about my minivan problems I bit the bullet and told the dealer to just go ahead and fix it. The service rep actually talked me out of it, so I thought I'd get a second opinion and just had them put it back together. I guess we'd figure something else out or I'd just try to sell the WSP ticket. They still charged me $525 to investigate the three different problems and to pay for the new key($239).

So, my wife and I decided to trade in her 2012 Accord for a loaded 2017 Odyssey with only 32K miles that even had a hitch and wiring for my trailer. On the way home from buying it last Friday I had her swing by the Chrysler dealer so I could pick up my old minivan. Started driving it home and noticed the steering was much tighter than it had been and everything I had them check out was now working fine. The back latch that was stuck in the locked position is now working manually, but the power mechanism is still not working.

So, now we have two minivans and a car payment I didn't have. It will be nice to ride down to the Keys, though.

If anyone here is using night vision in their scope I'd love to check it out and get some idea of what's involved. I missed it when they were using one in the Valley of the Dobs last year.

Jim, I sympathize with you.  I bought a used travel trailer to use for the WSP and other stuff.  My intent was to be able to tow it behind my old Expedition.  However, I noticed some play in the front end.  I got it checked out and the whole front end was basically worn out - over $1000 to repair.  Of course it being 20 years old with more than 225,000 miles on it no wonder.  I started thinking about how much longer the transmission might last - especially since I hope to go to the TSP and Okie-Tex.  Gave up and replaced it with a very low mileage 2015 F150.  Don't want to run out of money in my old age but gotta enjoy it while I can I guess.

Jim
I use a gen3 NV device and so does my friend Tom. We will be in the boy scout camp if you want to come check it out.

Thanks, I will Brian. Last year I was on the eastern edge of the Girl Scout camp close to Camp Sawyer.

I wonder if the camping conditions have changed much from last year.

I was not there last year so i am unsure.  I am looking forward to this year though!  I hope the weather is as good as i heard it was last year.

We going to try for a CN group photo this year ?

I am. Can't wait to get in the car for the drive south. Oh, I luckily won a $250 square on the super bowl which should just about pay for my gas down and back.

Looking forward to WSP again. Last year was my first WSP and I enjoyed it immensely. The Girl Scout camp was still suffering after-effects from the 2017 hurricane, and I can't imagine it'll be much better this year, but I have seen no reports one way or the other. The skies, the cameraderie, the weather were all wonderful, and I expect we'll enjoy much the same again this time.

Can hardly wait for the WSP!  Eta Carina is calling.  I’ll be staying in a travel trailer instead of a tent this time.  Just getting old enough to want a bit more comfort.  See y’all in a week and a half!

I've been to WSP a couple of times and enjoyed it, but the drive down from Raleigh, NC is an exhausting, boring marathon that, coupled with the early am lineup process once there, cascades into a state of chronic fatigue and sleep deprivation during WSP week.  That said, I'd recommend anyone from the eastern US who's never gone that it's a worthwhile astro "bucket list" experience where you'll see lots of southern-sky objects that are either inaccessible from most of the rest of the US, or else heavily compromised by their much closer proximity to the horizon. You'll meet lots of CN folks face to face.  Someday, I'll do WSP again, but I'm just not ready to do what it takes to be there this year.  I'll be especially interested in first-hand reports how the site recovery from the hurricane is faring.

We’d sure like to see you again, Chris. If you were coming I’d wrangle up an acoustic guitar so we could jam a bit during the day. As it is I think I’ll be taking my ukulele if anyone want to have a uke jam.

For those staying on the Camp Sawyer side - are you bringing any contingent power or are you relying 100% on the fact that AC will be available (for our astronomy gear) for all to use on that side of the field?

I'm going to be on the Girl Scout side with a 3000 w Honda generator (borrowed).  I'll likely set up around where the chickees used to be or maybe closer to the highway...not sure, really.

I'll be in a tent and I'm a bit worried that the disturbed sand/soil will not hold tent spikes well...

I plan to run the generator for only 2 hours a day to recharge my battery/inverter..

I'll be in a tent and I'm a bit worried that the disturbed sand/soil will not hold tent spikes well...

Dave, last year I stayed in a tent not far from the Chickees.  The sandy soil held my tent stakes well.  I did not use the thin bent rod stakes that usually come with tents.  I used heavier big nail type stakes.

Hi Dave, Here is a pic looking north towards where the chickees were. IIRC there are still two that survived, they had the welcome talk and door prize drawing in one of them and it's roof is just visible in the background behind the palm tree The rest of the chickees would have been to the right of that (behind my sun fly). As far as tent stakes, I have some eight inch long nails 3/8" diameter I bought at home depot. It was hard getting them in as the gravel was only a few inches deep before you hit rocks. Maybe it'll be a little easier away from the "beach". I had to try several times to get them in. Don't forget a hammer. 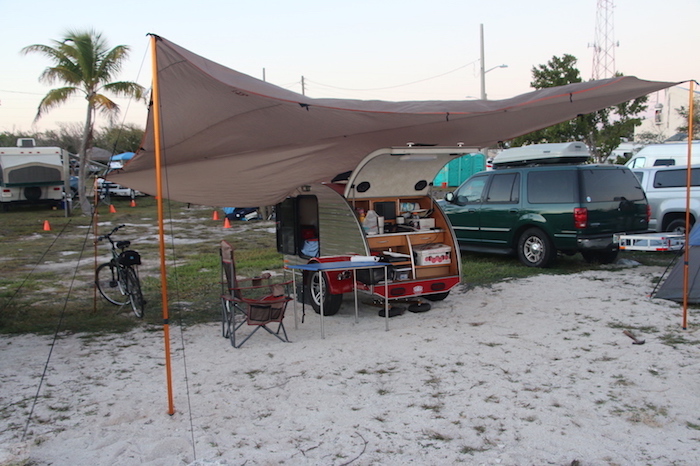