While my most memorable observing was watching and studying Mars all the Lunar/planet occultation events, grazes and asteroid timings we did back in the day (1970’s and 1980’s) was as much fun as kids at the beach.  Getting together with close friends, such as we were, and fussing around with equipment and finding the targets was absolute fun for old guys.  The WSP would be a great event to do such things and many will learn much fun more technical astronomy can be.

I shiver with antici

loaded the mount and scope ready to leave at 5 tomorrow afternoon. Loads of other stuff but my dear lady will load any of the not heavy stuff tomorrow.

I have to go in to work to tie up a few loose ends in the morning and should be back home to start loading up about 9am. First time loading the new minivan so it might take a little longer. The teardrop is all packed and ready to go, tire pressure checked on all of the tires, so it should go pretty well in the morning. I took a look at my mirror and decided it needs to be washed tonight. This would all be a lot easier if I was retired, as it is I’m an overworked 62 year old with not enough hours in the day. I’m really looking forward to relaxing a little bit and get some good observing done.

Jim - I do not know where you will be on your trip Saturday, around one in the afternoon, but you need to find a sports bar and watch the Red Wings/Bruins hockey. The last place Wings have taken the last five games from the Bruins; will it be six?

Should be a super way to relax if they do.

Hoping to leave Massachusetts at 6AM tomorrow morning. Will start packing tonight and then load up the car. Should be around 12 degrees by the then. There is a lot to take care of life-wise in prep for a trip like this, not to mention the astro equipment aspects, then the logistics, expense and energy to hopefully arrive safely there and back. All of this for some time away, being with folks who share an interest, and whatever personal satisfaction you get when observing. It is not only worth it, but necessary. Looking forward to a great time with you all. See you soon!

Jim - I do not know where you will be on your trip Saturday, around one in the afternoon, but you need to find a sports bar and watch the Red Wings/Bruins hockey. The last place Wings have taken the last five games from the Bruins; will it be six?

Should be a super way to relax if they do.

Thanks Bob! We’ll be in the car Saturday but will listen on SiriusXM. Yeah, the Bruins might have been taking the Wings too lightly, but that’ll probably change with a vengeance one of these games. I’m just looking forward to next year as I’m sure  GM Yzerman will make some changes, he didn’t do much this year as he knew they were still rebuilding and probably going to be bad.

Staging all my gear for loading.  Taking the Amtrak Auto-Train from Northern Virginia down to Sanford arriving Sunday morning and then driving the rest of the way down.  I can't decide if I'll sleep in line or just get a hotel room and wake up early.  Did that last year and it worked out.  Looking forward to seeing everyone down there.

Going to pack the travel trailer tomorrow and the pickup Sunday.  I've only got 470 miles to drive compared to a lot longer trips posted above.  I hope everyone has a safe, enjoyable trip.  I look forward to seeing old friends and meeting new ones next week.

Nice visit with WSP trekkers, Dan Joyce and Darren Drake, who stooped by our outback abode for lunch and a little Florida rain shower.  Sorry for fuzzy image we were all moving.  Dan and I go way back to the good old days (1970's and 80's) with the "Black Hole Gang." 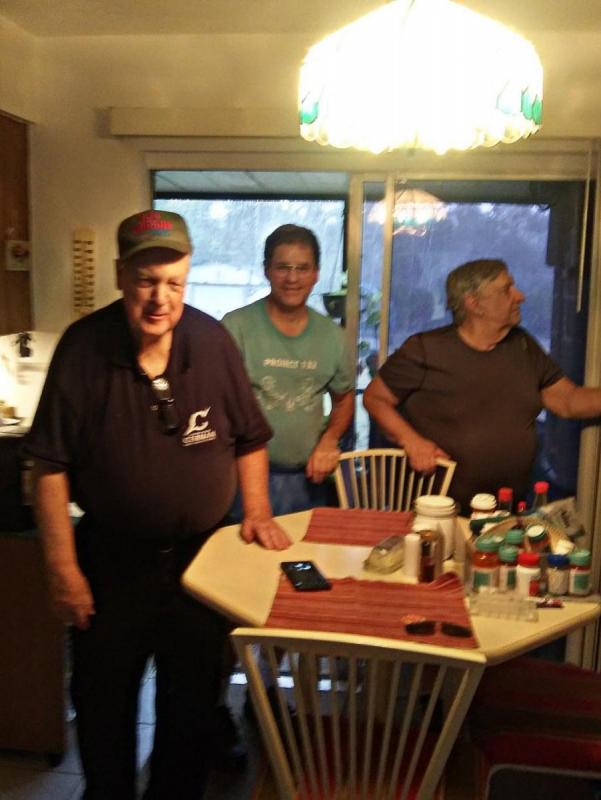 Wow, it’s been 27 years since my last WSP and I was there at the beginning, 1984 I think.  So nice to see old and new friends on their way to enjoy the great sky of the Florida Keys.  In the 1970’s and until leaving south Florida in 1996 I would meet with good people like Dan Joyce who would meet with us south Florida gazers at different locations to observe and talk about telescope making.  We were called the “Black Hole Gang,” after our mentor and close friend, Chick Capen coined the name many years ago. At that rime the gang was small; consisting of Jeff Beish (me), Chick Capen, Don Parker and Bill Douglass:

Then quickly expanded to include Chick’s son, Rigel Capen, Tom Dobbins, Carlos Hernandez and then later Tippy D’Auria, Dave Raden, Mike Reynolds,  Steve O’Meara and several more I have forgotten.  Getting old has a way of fogging one’s memory.

Before the Winter Star Party began and afterward we would regularly meet and observe all over south Florida, even in the Keys 90 miles south of Miami at Bahia Honda Key, Long Pine Key camping grounds, the Flamingo camping grounds and in between places.  Our most popular place, and at the site if the first WSP, was at the Mahogany Hammock parking Everglades National Park.  Nearer to Miami was the parking lot at Lake Chekika State Park and “Burn’s Lake,” out 65 miles west on US-41.  We probably hit ever rest stop and parking lot between those places as well.

Yeah, the Winter Star Party was born when a bunch of us decided to share Florida astronomy with everyone else.

I love these stories of the first years of WSP - thank you! You guys started a fantastic tradition that has really effected thousands of people since. Having access to the area is a real privilege and some of the views are the best we out of towners will ever get.
Cheers!!

I love these stories of the first years of WSP - thank you! You guys started a fantastic tradition that has really effected thousands of people since. Having access to the area is a real privilege and some of the views are the best we out of towners will ever get.
Cheers!! 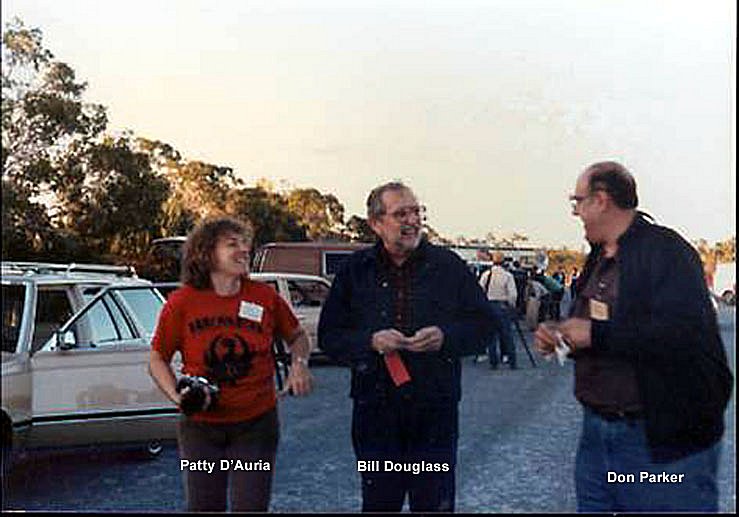 This was in the Everglades and I will have a stop at this place today..

Packed up and getting ready to head out from Nashville! Everyone travel safe. My first time coming to WSP and can't wait to soak up some knowledge :-)

This was in the Everglades and I will have a stop at this place today..

Say hello to our friendly gators.  It was a very dark site back in the day; however, after hurricane Andrew the LP from the east coast completely drowned the sky with orange light.  Someday even the Moon will be blocked by Miami light pollution.

Here is a pic from TODAY of that original WSP site.  It is called Mahogany Hammock in the Everglades

If anyone is in the neighborhood of WSP this evening, i plan on having dinner and a beverage or two at the Marathon Grill and Ale House to watch the NBA all star game between 8-11pm. Reach out if you're interested!

It figures, the one place I scoped out is closed. Off to castaways in marathon instead....

I'm in Homestead at an awful motel.   No electric plugs beside the bed for CPAP...  I had to get my extension cord out of the car.....

going to get an early night and then drive to the lineup tomorrow morning.

I made it to Homestead as well - Hampton Inn - very good but a bit pricey. Looking forward to the fantastic fried conch eggs Benedict at the Cracked Conch Cafe mile marker 50 on Marathon for breakfast each day!

1215am - about a dozen cars lined up outside the girl scout camp and two at the boy scouts. The skies are clear and glorious!

Tried to sleep in my teardrop. Too hot. I’ve been here for an hour and someone just pulled in behind me.