LDS 838 is a faint equal bright pair with visual magnitude around 12.5 and a separation of currently ~2 arcseconds. Resolution will need some aperture beginning with 150mm or 6 inch but should else pose no problem if the observation location is southern enough. This pair moves with an impressive proper motion of >3 arcseconds/yr although this is hard to notice as the background star field is even fainter. Even more impressive is the short orbit period of ~26 years so you could follow this pair over a full orbit if you are young enough with noticeable changes in separation and position angle from year to year. LDS 838 is with a distance of less than 9 light years rather close to our Sun system. Radial velocity is currently not known so it is unclear if this pair comes closer or travels away from us

I haven't split this pair (LDS 838 - BL & UV Ceti) but now that it is becoming visible again in the evening I will give it a go.

Here is a photo of the unresolved pair that I took as part of my "closest stars" survey. 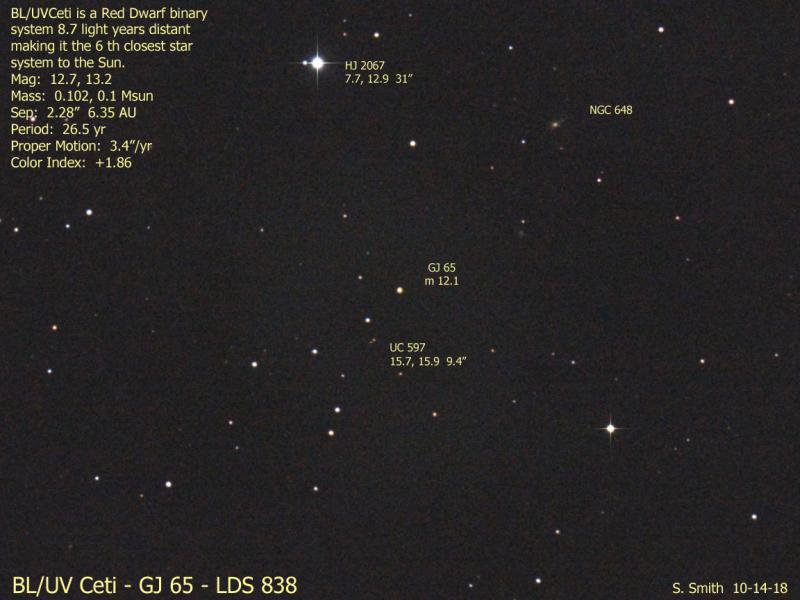 Interesting image. Good luck for your next attempt.

I'm far enough South, but the magnitudes don't suggest, based on my past experience with faint fairly close pairs, that 6-inch/150mm will be enough. Around mag 12.5 is getting quite dim for pairs around 2 arcseconds - photographically, not difficult, visually it becomes limited by decreasing resolution capability of the eye with dim stars.

The WDS lists the magnitudes at 12.7 and 13.2. Based on spectral types and distance from us, that sounds about right. Gaia has remarkably bright Gmags of 10.5 and 10.8 (rounded); seems very unlikely to match the visual magnitudes.

I'll look up the pair but think I'll use my C9.25 for a bit less eye-strain. It gives near a full magnitude benefit over a 6-inch. That can make the difference between "did I see it?" and a definite sighting. However, I'd be more inclined for a long-term project to image the pair periodically, as that shows both the orbital motion and the rapid proper motion against background stars. It would make a nice series over a decade or two.

Hi Wilfried -  yes the mass of the primary that I have listed is clearly in error and i have corrected the photo however the values I have found list the masses as being nearly equal (1.02 & 0.999).  Where did you find the 0.15 value?

As to the visibility of the components I always take the visual magnitudes listed for stars trending toward the red end of the spectrum with a grain of salt - they always seem harder to see than the numbers would suggest.

The GAIA DR2 StarHorse catalog (Uni Leipzig) offers now masses for about 80% of the GAIA objects brighter than mag 18. For GJ65 the median masses are ~0.15/0.14 with some statistical spread.
Two other sources would be Benedict et al. 2016 and Kervella et al. 2018 giving slightly smaller masses of ~0.125/0.119.
The mentioned ~12.5mag are own V-filter measurements

The Kervella paper is very good. Is your 12.5 mag measure the combined magnitude for the pair?

Measurements are actually 12.2/12.3 Vmag but with heavily overlapping star disks so I suspect some bias here towards too bright values. Calculation from GAIA G/B/R-mags would give 12.7/13.1 Vmag estimations.

Shorter exposure time did not work out, star disks are still overlapping

Measurements are actually 12.2/12.3 Vmag but with heavily overlapping star disks so I suspect some bias here towards too bright values. Calculation from GAIA G/B/R-mags would give 12.7/13.1 Vmag estimations.

So the likely mags - if derived from Gaia photometry - are close to the WDS listed numbers....

Will be interesting to see what you get if you can get separated star disks. What telescope/camera setup are you using? One of the iTelescopes again?

Yes, iT32 with a resolution of 0.63 arcsec/pixel - I hoped this should be good enough for a 2" separation with faint stars but this did not work out so far

The 88% illuminated Moon was shining a short distance above and the horizon
was bathed in the light-dome from the town of Castle Rock located about 5 miles
south of me.  Otherwise the seeing was very good and steady considering the
stars were only 32 degrees above the horizon. 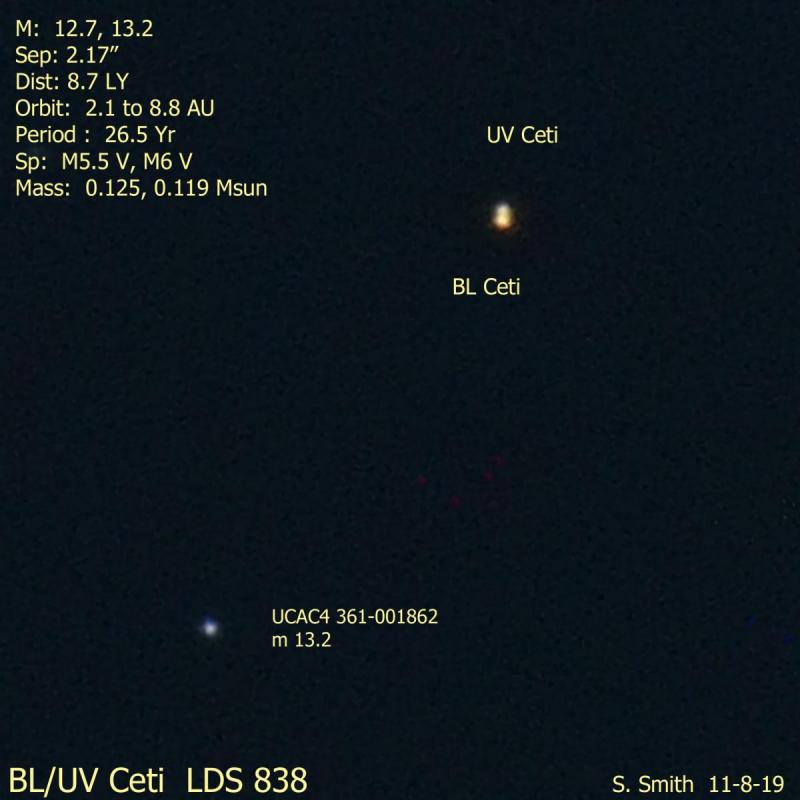 Here is a comparison of BL/UV Ceti to KR60 which I used as a guide to estimate how
difficult this target might be to resolve.

I think I can get better contrast and separation with my TSA120 based on the results I got when imaging KR60. I will try again when the moon moves out of the way.

I haven't split this pair (LDS 838 - BL & UV Ceti) but now that it is becoming visible again in the evening I will give it a go.

Here is a photo of the unresolved pair that I took as part of my "closest stars" survey.

Steve, are you telling us that LDS 838 is also BL + UV Ceti? If so that would mean the UV part is a flare star. Burnham's Celestial Handbook had a write up on it. He reports on a flare in 1952 where in 20 seconds it increased from magnitude 12.3 to mag. 6.8. There must have been other flares since then. Here's an AAVSO write up on UV Ceti:

If I'm off topic, then disregard the above (interesting) information.

OK, I see now GJ 65 is also known as UV + BL Ceti. SkySafari has an interesting write up on the system. Both BL and UV are flare stars. It is noted that while UV Ceti isn't the first flare star discovered, it is the most prominent example. When SkySafari displays the orbit, it is near maximum separation in 2019 @ 2 arc-sec. In 2024 its separation will close to just 0.5 arc-sec. I don't know how accurate SkySafari is for the orbit. But it is something to consider for those hoping to split this double.

Since this pair is so faint, I would be surprised if my C-11 could split them. The biggest problem might be identifying the subject in a star poor region of the sky.

There are some interesting observations in the Kervella paper on page 6 regarding the flaring activity of UV Ceti.  It states that "UV Ceti shows on average one flare every 36 minutes"  and that the flux of the flares skews significantly toward the ultraviolet.

Davenport et al. (2012) extended the ultraviolet-visible modeling of flares to the near-IR domain and concluded that even an exceptional flaring event causing a ultraviolet flux increase of u = 5 mag would result in a flux increase of only a few 0.01 mag in the near-infrared. This surprisingly small contribution in the infrared is due to the combination of the intrinsic blue color of the flares, and the very red color of the M dwarf spectrum.

Perhaps my photograph captured a flaring event which shifted the color of UV Ceti more toward the blue end of the spectrum than would be expected for its spectral type.

Another interesting factoid is that no color index is listed for UV Ceti although one is listed for BL Ceti (1.87). This may again be due to the potential color variability due to the frequent flairing.

Great image!! All this imaging of close doubles below my project 5arc-second limit is making it difficult to focus on my project! ☹ Keep up the great work!