Some measurements and a question

I have a pair of Denk II's that I love. I see the 26mm entrance aperture frequently quoted, but I was measuring today and found the following. The main issue is that the body has a 28mm female thread, so if you want to attach the binoviewer, you have to put something there.

Prism at entrance: not round, 25mm at minimum but much wider in some spots; 26mm is not a bad average

Powerswitch middle position: I have to remeasure; I have 24mm written down due to its male thread section

If you take a binoviewer like a Baader Mark V, which has a 28mm entrance unmodified, is there a similar reduction? I know the GlassPaths reduce it to 24mm, but is it possible to get to 28mm, or does the mounting also reduce it? Seems that T2 would not and you could get to 28mm if you can reach focus.

As noted, the aperture of the power switch is smaller than the front aperture of the binoviewer.  The effect is not seen so much in the higher power modes, but in the reducer mode, there is considerable off axis illumination falloff in the Denk units.

To be absolutely fair though, all BVs, including the Mark Vs, will vignette the field of view and the only variables are how much the view is vignetted, and at what focal ratio aperture loss occurs.

And here is a very simple way to determine the amount of field vignetting that occurs from a given aperture.

For example, the Denk Standard has a light path of about 116mm (at least this is the figure I seem to remember seeing posted, I have not measured it directly).  This does not include the distance to the opening of the nose piece screwed into the power switch. I think that total distance adds another 25mm or so (I have measured this, but I forget the measurement).

If the opening at the front is 26mm, then given the focal ratio, the fully illuminated field circle will shrink 1mm for every multiple of the focal ratio.

Now remember this though.  Most reflectors will only have about a 10mm fully illuminated field to begin with, but then most refectors are considerably faster than most refractors.  Even in low power mode, an f/4.9 reflector in low power mode would still be working at f/6.37 and if you added the light path and aperture of the power switch itself (needed to get to 1.3x) here are how the numbers would look.

If the light path through the entry of the low power lens in the power switch adds 10mm, then the you would have 126mm of distance at f/6.37 so you would reduce the light cone by 19.78mm, and since the diameter of the low power lens is something like 24mm, then this would reduce the 24mm fully illuminated circle to (24 - 19.78 = ) 4.22mm, and everything outside of this is vignetted.  So, move 2.12mm off axis and the vignetting starts.   It is soft though so unless skies are moderately bright, it would go undetected.   I used such a configuration in my 12" f/4.9 dob and with the D21s, I could live with the visible vignetting, but with the 24mm ES 68s, the outside edge of the field was very dark as compared to the center when viewing under my red zone skies.

Again, not picking on the Denks.  Just used them because this is the unit in the tread.

The message here was how to calculate fully illuminated field size and this method can be applied to any binoviewer used in any scope.

(Note as well that since the fully illuminated field is so small, once a planet drifts out of the center of the field, it quickly drifts into an area of the field that is essentially working at reduced aperture and contrast is lowered accordingly.   For binoviewing planets with a fast dob, the best result will occur when the planet is kept near the center of the field.).

None of this is intended to say that you are making any kind of mistake or that what you are doing with your own configuration is bad, or anything like that.  I am simply providing information on how you can determine the performance envelope of your own configuration.  What you use is fine with me.  I make a lot of compromises in my own configurations and with binoviewers, it is often simply a fact of life.  Do what works best for you.  I don't condemn anyone for what they do as long as it meets their needs.  Now, if they want to improve their performance envelope, this kind of info can sometimes help.

I have become a much bigger fan of the Televue 2x Amplifier for binoviewers because it retains almost full field illumination but this comes at the expense of the high (2x) magnification.  People using un-driven dobs for planetary views that wish to let the planet drift though the field would probably do well to use the TV 2x amplifier. I now use it in my dob. For planets, the 2x is desirable, but again, this provides for almost full field illumination and corrects for spherochromatism.  Is it easy to see the difference?  No, but this is CN, the home of the free, brave, and most anal-retentive hobbyist known to man.  LOL. 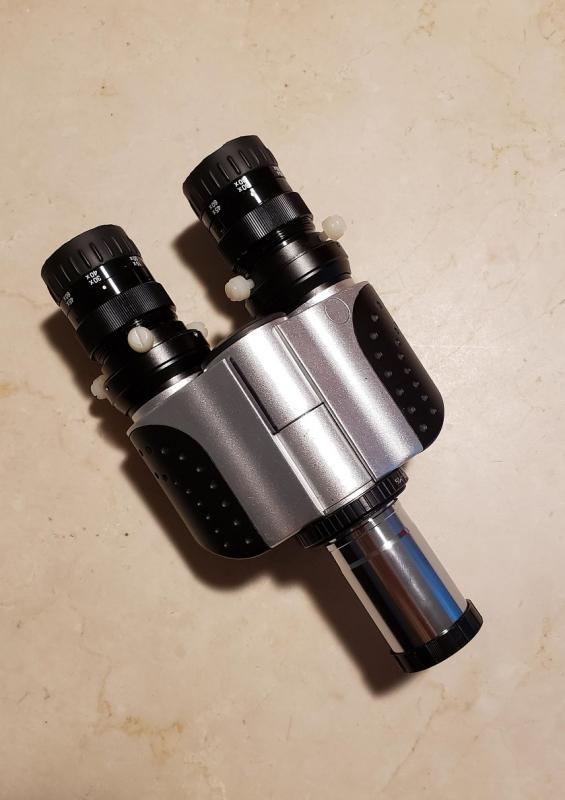 Thanks very much, Eddgie. That's a very useful rule of thumb.

You mention the TV 2x Amplifier specifically. Does that not also hold for the 45mm Denk OCS (which is like 2.3x depending on where you put it)?

One of my uses is solar e.g. after a Baader TZ4 telecentric at f/28, so the cone will be narrow. It is really about how much TFOV it can support. I figure 28mm clear aperture is 36% more area than 24mm, and that is not nothing.

(The other uses are generally planets and globulars, and of course just cruising around for fun.)

I do not think the Denk unit is a telecentric type unit while I believe the Televue unit is (though I have no absolute assurance but it behaves very much like the Powermates and it makes sense that TV would use a telecentric type lens for his binoviewers, because Nagler knows his optics.)

The reasons that I do not think the Denk unit is telecentric in nature is pretty simple.  It behaves like a Barlow. If you change the spacing even a little bit, the power changes.  This is essential for he Denk (and Earthwin) systems because if you can't reach focus with the Newtonian extension tube, extending the tube even an inch makes a considerable difference in back focus.  If the unit were telecentric in nature,  extending the Newtonian tube by 25mm probably would not change the focal lenght by all that much.

To be absolutely clear though, I do not know the design of either system and the only concrete thing that Televue says about the 2x is that it corrects for spherochromatism.

At 2.3x though, you are not loosing nearly as much illuminated field as you would at 1.3x, and the difference between the Denk/Earthwin/Televue 2x field illumination is probably not enough to worry about.

None of these are issues with standard refractors because they are typically simply not fast enough for the illumination to fall off to the point that most observers would be distracted by it.  Even though the field is vignetted, unless the observer were using a very fast refractor at native focal length, it would not be enough to ever see.

And I have explained how to see illumination loss in the past, but I repeat it every now and then because it fall in and out of the common wisdom.

To measure the illumination falloff (an estimate) is simple: Put a bright star at the center of the field and using a mid/high power defocus it maybe 3mm to 4mm.

Now, simple move the star away from the center of the field and watch the side of the Fresnel pattern that is facing the direction of movement.

As you do this, at some point, you will see an arc shaped inclusion develop in the Fresnel Pattern.  The point where you first detect this inclusion (you may have to back up after you first detect it to re-start so that you can see the exact point where this occurs to measure the fully illuminated circle.  So, if you were using an eye piece with a 10mm field stop and you noticed this happen when the center of the pattern (not the edge, but the center of the pattern) half way to the edge of the field, then this would be 2.5mm off axis, and this would mean that your fully illuminated field is 5mm.

Now it is not hard to know exactly.  You kind of have to guess a bit, but your guess about the area is probably going to be reasonable close.

Every time I use a new configuration, I like to do these measurements. Sometimes I have to live with the results because I have a specific goal for the configuration and am willing to accept something undesirable because to get the goal, I have to.

Also, from time to time, I use it to combat some negative posts.  For example, someone might complain that a Binoviewer is a lot dimmer than the view in Mono, and I might see that he is using a C9.25 with a 2" diagonal, a configuration that is absolutely in an aperture-reduced state and with an increased secondary mirror, which conspire to both considerably dim the image and lower contrast, and I will explain that his result was badly skewed by his configuration.

Again, even I accept some compromises because to achieve my goal, it becomes necessary. For example, my Lunt binoviewer is probably not fully illumintating the area around the sun where some prominences can extend, but I value being able to get a full disk sun, and I doubt that the actual loss is more than 2% or 3% at the furthest a Prom would ever extend from the sun, but I accept this because when I zoom to a low power in my eyepieces, I can still see the full disk, and the disk itself is (by my calculation) fully illuminated.

So, the reason for this post is to tell readers how to actually measure the field illumination of their configuration. It won't be exact, but it will be useful to see if this or that change makes a beneficial improvement in performance.