I plan on selling off the C6R and going to one refractor.   I want an easier rig to setup.  The C6R OTA is sizable and using it on the EQ6 makes for a massive setup ... at least for me.

I want a somewhat smaller rig but, this time with premium optics.

The TSA-120 looks awesome.  It should be easy to mount on let's say an AVX.

The only thing I fear is regretting dropping down to 120mm aperture from my C6R.

The TSA120 is tops on my list at the moment but, I am mulling over increasing my budget to $5K+.

I am thinking maybe looking for a used AP130EDF or TEC140.

I had a friend who owned an AP130EDFS years back.  It was quite a nice package and I loved the views.

Anybody have a spare AP130EDF or TEC140 lying around they want to get rid of??

I think I could still go with a smaller mount than the EQ6.

I'll think about it more over the weekend

The APM 140 ED is what I would choose. ES have a bpnew140 I want to know more about. But 140 will leave you happier downsizing IMO.

A good point about aperture and downsizing, bv'ing and focuser travel, expected quality, accessories required...  Lots to think about and compare.

I owned the TSA120 for a while and it was really an easy scope to field, I used it on a SkyView pro and was very solid.  For me, anything under 5" is a small scope, and I'd consider carefully that no matter how good the optics.  Saying it is a small scope i don't mean as a negative, just that there is some expectations management involved depending on what you like to observe compared to 12" aperture.  So I'd think a lot about the tradeoff in ease of use that comes with smaller aperture and then the objects and exit pupil constraints, and it sounds like you are doing that.  I love refractors, that they give such crisp views and no need to worry about collimation, so not trying to start a mirror vs. lens debate, just that there are unavoidable tradeoffs.

An interesting post on Stargazerslounge says the Esprit is really too heavy for a HEQ5 mount, an EQ6 being the ideal minimum for it.

The Espirit 120 is a heavy but compact (short) optical tube, I think an EQ6 is probably over-mounting this scope if primarily for visual use.

I've used my Espirit 120 on a Vixen GPDX mounting since 2016, when balanced it seems to be adequate for visual and tracking up to 250x is fine. I've also EAA imaged but found the motor drives are extremely taxed by any imbalance in RA (no surprise) and also possibly they just lack enough torque to really handle the substantial 26 pounds this scope presents. More than 15 or 20 seconds of continuous imaging does show some drift but acceptable for EAA using SharpCap's "alignment" feature. So, the mount requirement is not a clear cut spec for many uses.

How big a deal is setting up the APM140?   I recognize that the easier to setup, the more I will use it.  That's why I'm getting away from the C6R rig.  I found myself making excuses for not setting it up when it's clear at the end of the day if I was tired at all.

It is old-school but, much more affordable.  Plus, tube weighs maybe 16lbs.

I'm more concerned over the optics.  I've heard great things about the Christen triplets for visual use.

Well, closing a deal on a used TSA120. After that, I will be shopping for a nice goto mount easier to drag around than the EQ6.

Well, closing a deal on a used TSA120. After that, I will be shopping for a nice goto mount easier to drag around than the EQ6.

You have chosen wisely Grasshopper.

IMO tracking helps eek out every drop from the scope, keeping the object centered in scope and eyepiece while all you have to do in concentrate on the view.  No need to re-center when observing with small or large groups.

Right. Tracking is great when sharing views with others

Unfortunately, NO, you need to earn the "handshake" so you will need at least another two genuine Takahashi scopes, mounts or accessories to get the "Key" that unlocks the case where your handshake information is stored.....

As for mounts for the TSA120, a tracking mount on a good stable tripod is the answer. That will allow you to exploit the TSA's capability to be used at high magnifications on planets and lunar views.

I still prefer the AZ-EQ6GT on a 3rd party solid tripod like the BB Planet or in my case the Tak EM400 tripod....

Anyone try a AZ Mount Pro with their TSDA-120?

Perhaps. I'll ask on the Mounts forum as well.

I have a couple more cents to add to the pile regarding the TSA120 vs Esprit120 derby. If you intend to pursue AP with your scope, the TAK is a more flexible platform. True the Esprit120 comes with a field flattener and they make a 0.85x reducer, but if memory serves me, the corrected field of the Esprit series is 33mm, whereas the TAK field flattener and 0.7x reducer have corrected image circles of 40mm and 44mm respectively. So the TAK could be used with larger sensor cameras, which will continue to come down in price as CMOS astro cameras become more common place. Also, the 0.7x TAK reducer would offer wider views, if that's your sort of thing. Of course, you may not have any interest in larger format AP, but I thought it worth mentioning.

No interest in AP

Anyone try a AZ Mount Pro with their TSDA-120?

Perhaps. I'll ask on the Mounts forum as well. 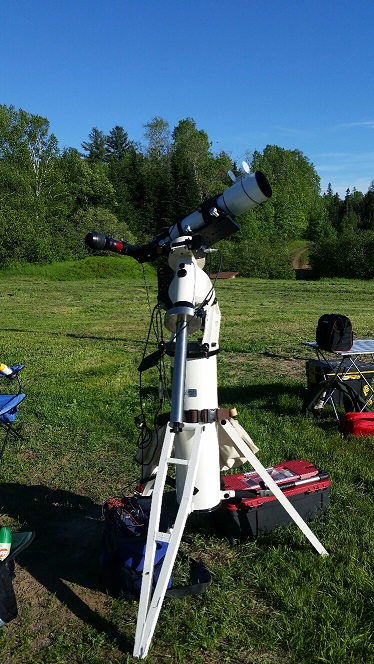 No interest in AP

Me neither, apart from phone snapshots. I wanted a triplet for comparison with my 120 Equinox doublet and to try a different make . Originally an AP 130, then Tak TOA 130, but I would have needed a stronger mount for either. The TSA120 light weight for a triplet makes it fine for a good 120 doublet capable mount, so money saved on not needing that went on the scope. Only a signifigant aperture increase would tempt me to sell the TSA, its the ultimate GOTO refractor over 100mm.

I'm looking through pricing right now.  Too bad Tak never seems to have a sale.

How true.  It seems they like to price gouge Americans.  I tried to get on their ".jp" website and I was forbidden.  Not to mention that many of the folks who travel to Japan have been able to  purchase the same scopes sold by Tak America for $1000 cheaper.

I’m guessing here but Tak America probably has an non-compete import agreement with Takahashi that covers North America. That agreement eliminates competition. So Tak America can charge what they want within the terms of that agreement.

However, Takahashi would certainly require that Tak America not just be any dealer/importer. I’m sure Tak America would have to be experts on the product line, make repairs, offer most all products etc., and really be an extension of Takahashi itself.

Tak America gets rewarded for offering that expertise and service with the non-compete import territory agreement.

Stellarvue did have (and might still have) a similar import agreement with their imported product line. SV’s prices were/are always higher than for basically the same scope from Telescope Service in Germany.

I’m not saying this is good or bad, just that it seems obvious.

One more page and they will be having you buy a Bugatti Veyron to carry it around. Now what is the boot space?