Can I see Uranus with a 8in dob?

Hi everyone, I have a 8in dob. I live in N. Cal.with some what dark skies. Still new at finding targets but getting better. Would like to see if I could see Uranus.

You can see it with small binoculars. Are you using the finder chart from Sky&Tel?

I use a mirror.

You should be able to see all the planets with an 8 inch.

Most definitely.  I have observed this object almost every year for the past 10 with my Orion XT8i.

The color is quite different than most stars so that, with experience, you may only need to be in the general vicinity at low power to locate it against the background.   Also, Uranus doesn't move a great deal from year to year.  The same can be said for Neptune--although to me it has a bluish tint versus green for Uranus.

Any of the free astronomy programs (Cartes du Ciel, Stellarium) will show you where to find the planets at any given hour on any given day.

To Ray's point above,  you can see Uranus in a finder scope if your Dob has one attached.  Once properly magnified, the planet's disc clearly distinguishes it versus a star.    Once you are there, see how many moons of Uranus you can spot.

Uranus is easy with an 8".  It's typically around mag 5-6.  Somewhere I have an image of it showing the disc clearly that I took with an 8" SCT and a webcam using eyepiece projection...

Uranus and Neptune, easily. They're really not very faint.

Should be able to, it is the oddly green/blue dot.

Should be about 17 degrees left of the moon.

You also have Neptune in Aquarius, that is a blue/green dot, and Pluto is some 7 degrees left of Saturn.

So lots in one night.

Here are the sections on Uranus and Neptune from the October 2019 Celestial Calendar.

Uranus lies three degrees southwest of the sixth-magnitude star 19 Arietis this month. The waning gibbous Moon passes four degrees south of the ice giant on September 15th. When Uranus reaches opposition on October 28th, it is 2.6 light hours from the Earth and shines at magnitude +5.7, which is bright enough to be visible from a dark site. Uranus will be 63 degrees above the southern horizon, the highest it’s been since February 1962, just before 1:00 a.m. local time on the night of opposition. Visit http://www.bluewater...anus_2019_1.pdf and http://www.nakedeyep....com/uranus.htm for finder charts.

Neptune is positioned 0.7 degree west-southwest of the fourth-magnitude star Phi Aquarii on the first day of October. As the month ends, Neptune is located 1.3 degrees west-southwest of the star. The waxing gibbous Moon passes four degrees south of Neptune on September 10th. Browse http://www.bluewater...tune_2019_1.pdf and http://www.nakedeyep...com/neptune.htm for finder charts.

Yes I have a 8" Celestron Evo HD and both Neptune and Uranus are nice.

Yes I have a 8" Celestron Evo HD and both Neptune and Uranus are nice.

Very nice, indeed!  I caught Neptune early with my TV85 last night.  I watched a movie with my wife and then went out to observe Uranus with my 8” Edge.  I don’t view these planets often, but I enjoyed it.  I might do the same tonight but with a SW 120.  I think I’m going to make tonight a planet night.

William Herschel discovered Uranus in 1781 with a 6.3" speculum mirror of perhaps 60% reflectivity.  I think your 8" aluminum coating of 90+% reflectivity will work fine. 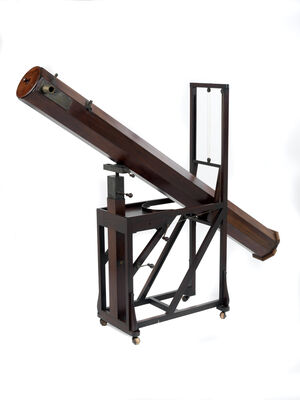 Let's show some maturity here and refrain from the off topic attempts to be funny please.

Last fall with my 8" dob I was able to see Uranus's disc as two tones, the normal greenish hue for about 3/5 of the planet and a whiteish cap but on its side. I was very surprised to see two colors. It's pretty small so crank up magnification once you find it to see a disc.

Last fall with my 8" dob I was able to see Uranus's disc as two tones, the normal greenish hue for about 3/5 of the planet and a whiteish cap but on its side. I was very surprised to see two colors. It's pretty small so crank up magnification once you find it to see a disc.

See the latest hubble images.  The pole that is tipped toward the sun is mostly white, the rest is bluish.

Folks,  this is the second post in two hours asking that the attempts at being funny stop. Please refrain from posts about the 7th planet that you think are the height of wit. They are not. Please keep the thread on topic and helpful.

Uranus is visible naked eye in rural sky.  The only hard part is figuring out which point of light it is.  Fortunately, it doesn't move very quickly across the ecliptic, so if one has an idea where to look it is not too hard to locate.  I just look in the vicinity for a candidate, then point the scope at it with Telrad or RDF to confirm the bright little disk at high power.

There are some very old star charts (predating the invention of the telescope) which show Uranus plotted as a very faint star.  So in a way it was already discovered long before Herschel actually identified it as a planet!

Diana is certainly right about Uranus being visible, and even recorded, long before Herschel brought it to prominence.  Although it has been viewed since antiquity, it was so small and so slow that no one before Herschel noticed it was moving.  Because of the quality of his mirror (he ground his own), he was sure that the object was more than a star-like point of light.  At first, Herschel didn't know what to make of it.  He thought it was probably a comet.  In 1781, from his home in Bath, England, he sent word to London's Royal Society and beyond asking for help identifying it.  But being new to astronomy (Herschel, a German immigrant, was a musician by trade), his coordinates were inexact.  Other astronomers had trouble fixing the object's location.  When they did, many realized that its path was unlike any comet ever observed.  It took a couple of years, but Europe's astronomical community finally decided that the object was a planet, the first discovered since ancient times.  Herschel wanted to call it Georgium to curry favor with King George III.  It worked.  King George brought him to Windsor and made him Astronomer to the King.

Georgium wasn't popular on the continent.  Some European astronomers simply called the new planet Herschel.  Berlin Professor J. E. Bode finally suggested the name that stuck, Uranus, the mythical father of Saturn.  Still, English astronomers commonly referred to Uranus as Georgium, the Georgian Planet, or other variations thereof until the mid 1800s.  You can always tell an Englishman, but you can't tell him much.

For the rest of his life, Herschel would be the only living person to have discovered a planet.  He died in 1822, well before Neptune was identified as a planet in 1846.

Easily seen with an 8" Dob.  Find the great square of Pegasus.  Walk over two stars in Andromeda to Mirach, the star that is often used to find the Andromeda galaxy.  Go down perpendicular from the line of stars Mirach is in until you reach Ares.   You will see the three brightest stars that make a ram's horn.  Follow the arc of the horn, and there is a 4th dimmer star.  Follow a line down from the 3rd to the 4th star in that ram horn's arc, about 4-5x the distance between those stars.  You will encounter a blue/green star brighter than others.  You can check that you are looking at the correct one, as Uranus forms the end of another arc of 4 points of light.

If you have a finder scope, the last stretch is about 2 FOV's.  If you don't, just use your lowest magnification eyepiece, follow that straight line slowly, and you will hit it.

At 200x, Uranus will resolve to a disk, while the neighboring stars will still be points.

Also try Neptune, it is even easier, as it is very near a bright star in Aquarius, Phi Aquarii.

What I found surprising the first time I searched for Uranus was just how obvious it was in the 8X50 finder scope mounted on my, at the time, shiny new Super C8.  It was brighter than I expected but the real giveaway was the distinctive blue colour.  Aside from brighter and now an obvious disk, the view through the main scope at 117X didn’t add much.  The moons helped add interest though.

I believe I saw it earlier this summer - right when the sun is going down, and mostly planets are visible.  I could be wrong.... Is that possible ?

I believe I saw it earlier this summer - right when the sun is going down, and mostly planets are visible.  I could be wrong.... Is that possible ?

No - Uranus is a 6th magnitude object, MUCH fainter than the other naked-eye planets, and right now it's in a constellation (Ares) that isn't up at sunset during the summer months.

I observed Uranus with a 72 mm refractor.

Uranus in my 10" (just a slight larger than your 8") shows it as a small disk, (quite small indeed) but if Uranus is located high enough on the sky, it should show obviously as a planet with about 200-300x. The color is a nice pale green. With you 8" you will be able to see Uranus and confirm it is a planet, but don't expect a sizeable disk like Saturn, because it is quite small disk!

Actually it's small but not tiny, because Neptune is even smaller disk, about half the size, and the four Jupiter moons can also be seen as tiny disks with a 8" (but really on the limit of resolution, a bit more like fat stars)

Ensure your telescope has a good collimation.

Its very interesting to hear the report of being able to see half of the disk whitish and half green. I am going to look out for this. And this is a good goal for your 8" too.

And finally, one challenge, its moons!

I wasn't able to see the moons yet. Or better said, I saw hints of Titania one recent night, but I couldn't really say it was a definitive observation. Although the moon is about magnitude 13/9 (easy for a 10" and even a 8"). The problem is the bright glare of Uranus so you really need as high power as possible, but with a good eyepiece, for the sharpest contrast for such a faint moon lost of the Uranus glare. Oberon is also theoretically possible with a 8".

Anyways, if you try to see the moons, choose a dark and a sharp sky, good seeing and a great high power eyepiece. Titania and Oberon will be difficult targets for a 8" but not impossible.