The classical Dobsonian has a mirror box that is roughly a cube. The mirror frame is bolted to the box in the bottom while the truss poles attach at/near the top. This arrangement requires that the mirror box be strong and stiff--which causes it to be heavy.

The ultralight weight Dobsonian has a truss system that connects directly to the mirror frame dispensing with the mirror box. The altitude bearings attach to the mirror frame with a reinforcement higher up to stiffen the bearing. This arrangement leaves the mirror vulnerable to dust kicked up as people walk by.

It seems to me that something in the middle would work just fine, we want:

a) protection from dust

b) more than very adequate ventilation

My new (almost finished) 13" F/3 has combined the protection of the classical mirror box with the design parameters of the ultralight class.

Let us start with the assembled mirror frame 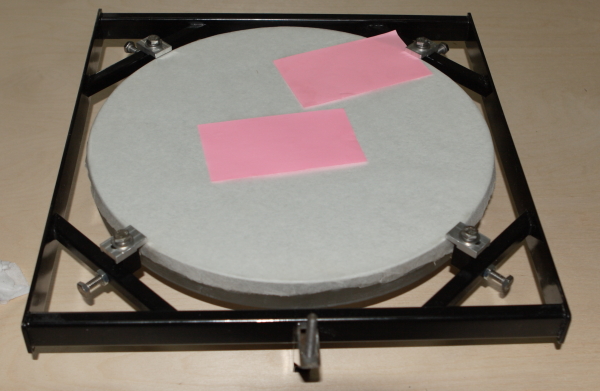 To this frame, altitude bearings are bolted on: 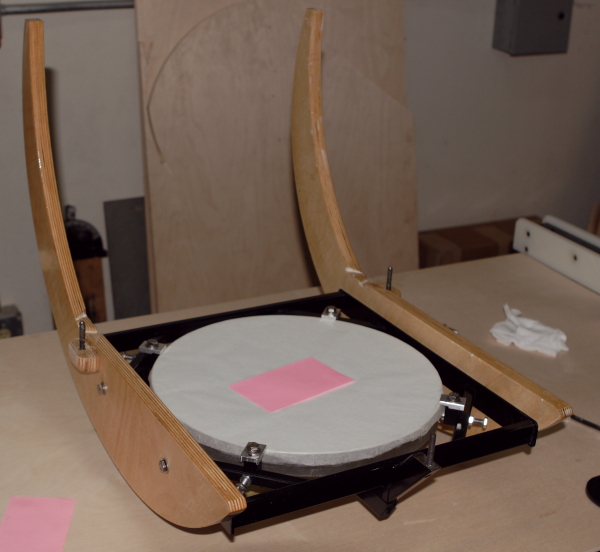 Those ATMs familiar with classical Dobsonians are wondering where the mirror box is !?! 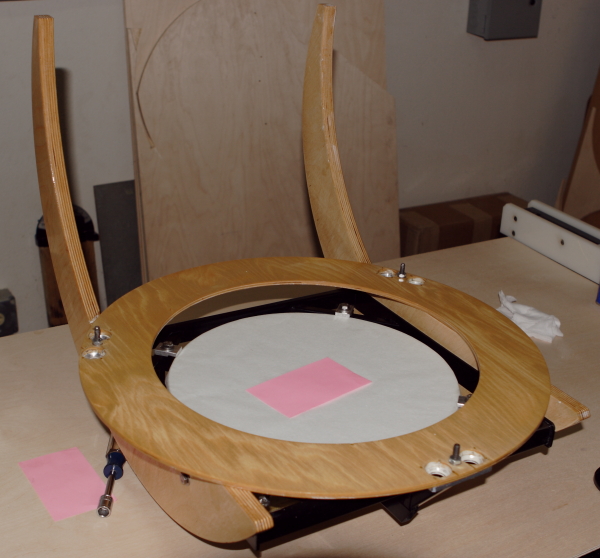 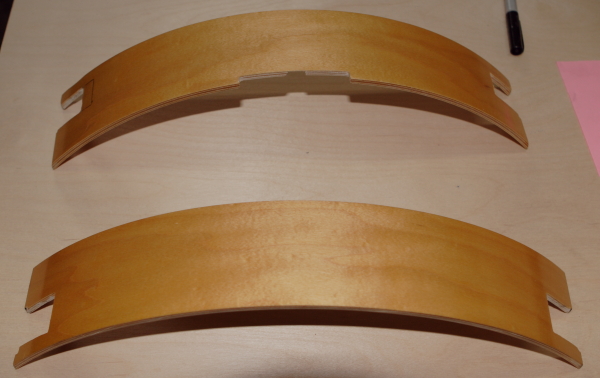 Two arcs of wood from the upper assembly <extra> are inletted so that they fit the mirror frame well, and sized such that they hold themselves to the lower assembly with their own spring pressure (no nuts, bolts, glue, epoxy,...)

A view from the top: 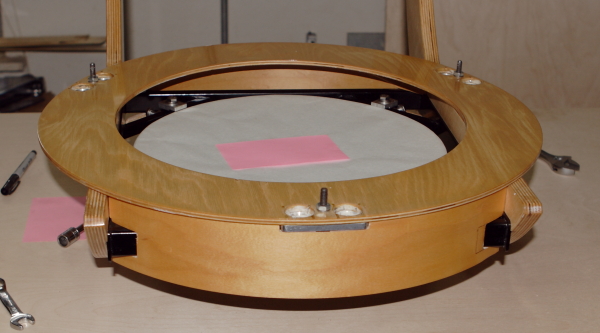 And a view from the bottom: 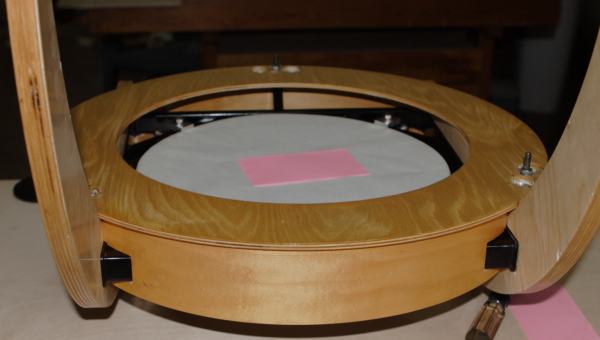 Thus we have almost the airflow of the ultralight class, with almost the protection of the classical Dobsonian for almost no weight gain.

The best of both worlds ???

It's a nice combination of features.  Do you have ventilation fans?

After first light, fans will be added.

Is it a 18 point flotation mirror cell?  Does it use a sling to hold the mirror or a cable?

Is it a 18 point flotation mirror cell?  Does it use a sling to hold the mirror or a cable? 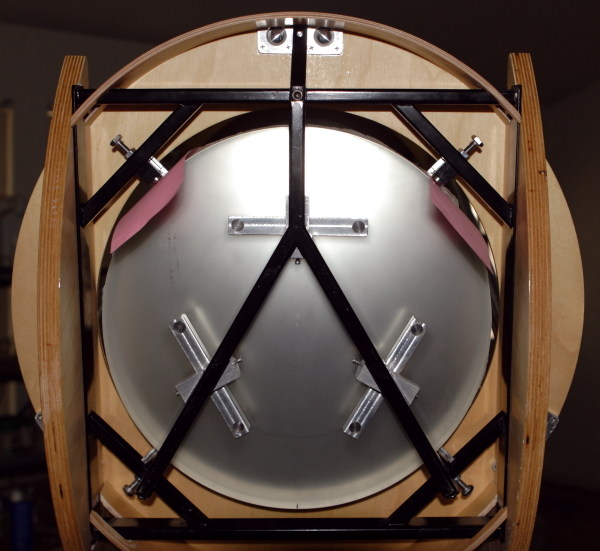 In the center of each beam are a pair of ball bearings.

At the end of each beam there is a miniature ball transfer.

Each beam was milled until the CoG was concentric with the axis of the ball bearings.

Then each beam had minor amounts of material removed until they were/are dynamically balanced.

The beam can be presented to gravity at any 3D angle and it will not have a prefered "heavy" end.

The movement are light, delicate, and stable.

This part was/is an experiment on how low the friction of a mirror mount can be.

The mirror is free enough that one can spin it like a lazy susan.

Because the friction is SO low, I will have to glue a string on the top so the mirror does not rotate.

After the mirror was so positioned, the mirror clips were adjusted until they had at least 0.004" clearance to the top of the primary.

With these tight tolerances being held, the mirror clips only have to extend a few thou over the edge of the mirror itself. the mirror will not fall out even when held upside down and shaken.

So, No sling, No cable. <almost> No Friction, No <unuseful> mirror movements

The 2 pink cards at the top of the image are 0.004,5" thick paper and are being used to check the assembled clearances.

Here is a picture of one of the mirror support beams:: 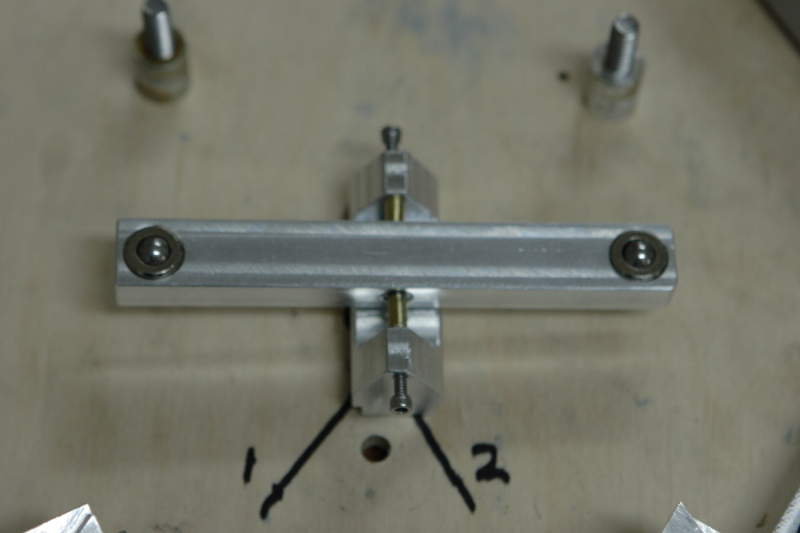 Machining the ball bearing race fittings was (ahem) "fun" {depending on your definition of fun.}

You will notice that the beam is not tilted in either direction, it is actually balanced on a shaft supported with low friction ball bearings, a single strand of hair 1" long will cause whichever side it hits to lean downward.

At the end we see the ball transfers. A BT is simply a ball, in a housing being supported by dozens of tiny balls in a spherical race and prevented from falling out the top with a cover. The ones I used cost about $1.20 each. The ball bearings were about $0.35 each {Ebay is your friend, here.}

Nice job! How did you make the curved mirror box fairings? I’m guessing you laminated a couple layers of wood vaneer or thin layers of plywood over a former of some sort?

Nice job! How did you make the curved mirror box fairings? I’m guessing you laminated a couple layers of wood vaneer or thin layers of plywood over a former of some sort? 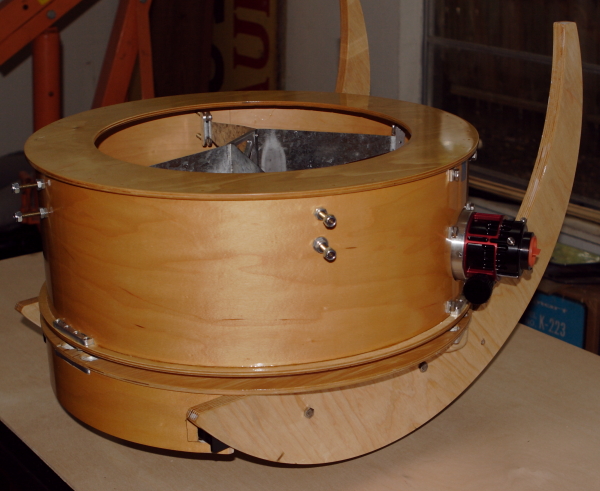 seen sitting on top of the lower assembly in its transport configuration, is comprised of a drum hoop sandwiched between two support rings forming a circular I-beam.

I ordered a 10" tall drum hoop and cut 3" off of it since I only needed 7" for the upper assembly.

The arcs used as the mirror box are from the 3" cut off from the top.