Rosette Nebula is a spherical region of ionized hydrogen located within an extensive molecular cloud in the constellation of Monoceros. The nebula is a rich stellar nursery, and contains about 2,500 young stars including massive type O stars HD 46223 and HD 46150. Strong stellar wind from these very hot stars is blowing away gas and the dust giving the nebula the appearance of a bubble. Powerful ultraviolet radiation and stellar wind shock waves cause plasma temperatures in the inner parts of the nebula to rise to between 1 and 10 million degrees. In contrast, plasma temperature in ionized hydrogen regions in general averages around 10,000 K. The open cluster NGC2244 has arisen from the nebulosity, and is located near the center. Rosette Nebula is situated at the distance of 5,200 LY, and is approximately 130 LY in diameter Open cluster NGC2252 is found at the NE fringe of the nebula, but lies in the foreground at approximate distance of 2900 LY. 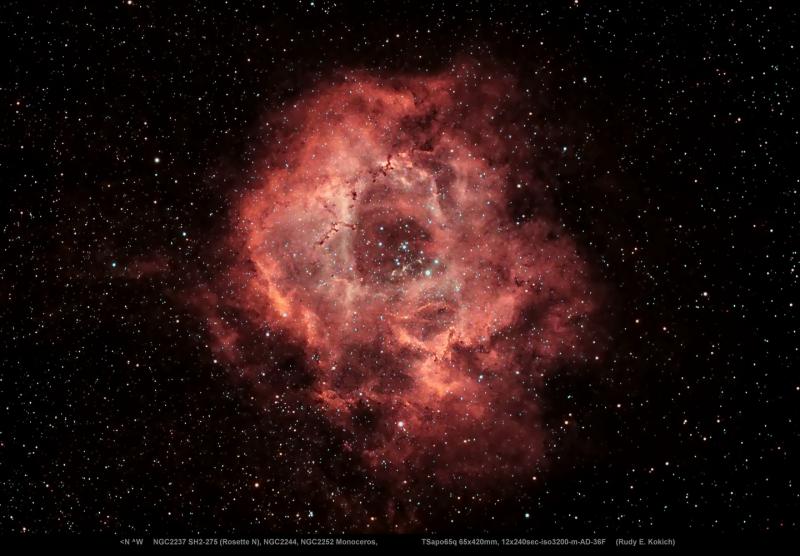 Beautiful image! I agree that there is very good variation in the red tones. Excellent processing.

Thank you Brian and Tim.

By extracting R (Ha) and G (Oiii) images from the original AstroDuo image, I can LRGB recombine R and G in various combinations and intensities, and sometimes using color interpolation, to get a wide range of colors and gradients. It is a new process for me.

I now have several years' of old data to reprocess.