What field of view/exit pupil is best for measuring a refractor's effective aperture?

I use this guide for binoculars http://binocularsky....oc_aperture.php

So am wondering if any particular eyepiece is best, and what FOV or exit pupil, for refractors.

It shouldn't matter what eyepiece you use if you do the "flashlight test" using an LED flashlight with a collimated beam or a laser.

We've measured the effective aperture of a lot of binoculars and scopes this way over the years.

In referred scheme longer FL ep gives brighter circle of light on exit from objective lens. It makes measurement easier. But it increases methodic error of the method. With short focal ep measurement can give more precise result, makes measurement harder - due to much darker light circle (even in dark room).

In my experience, measuring the diameter of the exit pupil is difficult and there are a variety of possible error sources.

I like the flashlight test, it can be very accurate because you're measuring the full aperture and it's independent of the eyepiece focal length and scope focal ratio.

I use a modified form. I use a 4.8 mm Nagler in a jig illuminated by a 2 inch HG laser. 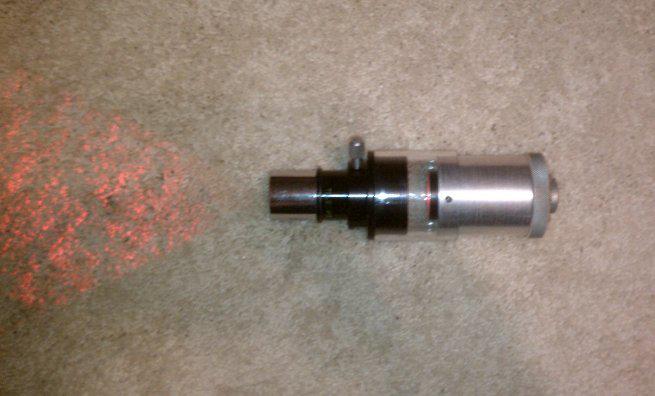 The first step is to go outside and focus on a distant object, the scope needs to be focused at infinity. If a diagonal is normally used, it needs to be in place.
I then lock the focuser, install the laser jig and either project the beam on a wall or place a thin piece of paper over the objective. I use digital calipers to measure the diameter of the beam.
I figure it's accurate to less than a millimeter. When I measured my NP-101, it measured greater than 101mm but less than 102mm. I contacted TeleVue and was told the actual aperture was 4 inches, 101.6 mm.
Jon

As for certain binoculars internal vignetting can occur. Hence "effective aperture" used in the thread title.

Have a read and everything has to be determined by some rather strange operations. Some I seriously suspect in violation of mathematics. Or at least the mathematics we presently use. 5 dimensional matrix transforms may be required and even then could be 6 or 7.

Just looking through a scope and looking at the sky is, I seriously suspect, not the real purpose, but a cover for something altogether darker.

Exit pupil falls into the realm of it can be too small, too big and surely no-one uses anything sensible in the middle, or like one person here (Me) just doesn't care. If it looks good exit pupil never comes into it, and if it doesn't look good I change eyepieces until it does. And again exit pupil never enters my thoughts.

You can measure the diameter of the objective. However, improperly placed baffles as well as drawtubes that are either too long or too small in diameter can cut into the light cone and reduce the effective aperture.

This is quite common with binoculars, inexpensive binos rarely operate at full aperture, the Starmaster 15x70s measure about 63 mm. Inexpensive 10x50s are generally not much more than 40 mm.

With telescopes, inexpensive, small refractors often have issues with the draw tube cutting into the light path. The 70 mm F/5.7 Celestron Travelscope measures about 63 mm.  Some of the early ST-80 type scopes suffered from this. The current versions barely make it.

Some of the Maks also have issues, undersized primaries. The primary needs to be larger than the clear aperture of the meniscus corrector. The Synta 127 Mak measured about 120mm-122mm.

For refractors, these measurements need to be made with the diagonal in place and at infinity focus.

This is not vignetting but actual reduction in aperture just as a Newtonian with an undersized secondary will not fully illuminate even the very center of the field.

One can use a tape measure... Roland Christen suggested this technique:

Bring the scope to focus at infinity with the diagonal in place. Remove the eyepiece and replace it with a pinhole. Place a tape in front of the objective and read the numbers. It's that last step that's difficult. More qualitative estimates can be made. For an air spaced objective with the 3 tab spacer, seeing the full size of the tabs is a good sign.

It seems to me measuring the effective aperture of the upper tier scopes is educational but probably not going to add much beyond spec, unless, like Jon, you want that extra decimal.

On the other hand many of the less expensive scopes out there, and some of the Japanese "60 mm" scopes were actually masked down to 50 mm.

Take all this stuff together, and the things that are going on with eyepieces (what they do versus their specs, even premier brands like TV and Pentax), and you will find, if you actually measure a star transit through the FOV at the celestial equator, that all these things, including your own measurement error, sum to within 5% of what you expect using rule of thumb calculations with the published specs.

That is my experience at any rate.  And I expect that of that 5% about half of it is the measurement error, since it is hard to identify the exact midpoint of the fov to trace the trajectory of a star across the actual diameter, rather than the shorter cords above or below.  (which are actually arcs if you use a wide field)

So the system as a whole is operating to within 5% or better on these specs.  But on the inexpensive scopes there is some cheating, for want of a better word.  And I can't say it's universal or name current brands.  I just know it tends to happen with the 1960s vintage department store refractors and inexpensive finders (even today).

Doh!  That is true.  However, it is also true that (regarding the rest of the post) focal ratios of instruments vary from their spec, and not all in the same direction; and that oculars don't always have the field of view that you would calculate from the specs on the box.

The focal length can vary considerably when using Cassegrain scopes where focus is accomplished by moving the main mirror (SCT, Maks). Placing a diagonal with longer barrels (like a 2") will increase the effective focal length of the scope since the infinity focus will occur with the main mirror at a different than "nominal" position.  Not sure at what point the induced SA becomes significant enough to degrade the image. I suspect that there is a bit of latitude here.