Although I have use both of my EAA setups over wifi, I've been looking for even a quicker EAA outfit for those brief periods that we get in the winter. Yesterday I can upon the solution without spending a dime. I use M43 cameras and they have this 8 sec live view as well as a limited ability to stack 4 images. I have in fact been able to see the Blue Snow Ball with ISO 3200 using one of my cameras and an 8 second exposure. However, the SLT tripod requires me to get on the ground to align the first star and it is so short that I miss portions of the sky due to the low angle. The tripod also has vibration issues. So I thought what can I do to fix the tripod so this issues will go away, and then I can use the builtin intervelometer after I confirm I have the target in the 8 sec live view if I want to stack later or go in the house and let the images continue for stacking later.

So while it was raining outside I tried combinations of every tripod and head I had in the house. Tried this before, but had forgotten about the Manfrotto old 488 head I had. As it turns out the head fits inside of the SLT mount and makes a very solid attachment. So here are the images of my new Grab & Go EAA. Battery is on the other side of the SLT mount (velcro) and the HC is now on the center column which I won't use on the CF 055 Manfrotto legs (both the head and legs are rate 15 pounds or over). My M43 cameras weight less than a pound and I have a 2" M43 T-mount for the GSO 2" focuser on my ST 80. I also have another type of mount (1 1/4" where I can use either the .5 reducer or a 2x).

I bought the tripod and head a long time ago for photographer but it just sits due to the great stabilization in my M43 cameras. As a bonus my G9 even has a red screen setting:)

Here are two images of the setup in case anyone is interested. This setup takes about 1 second to stop shaking after a bump. Think that a C5 or C6 would also work on this. Going to test it with my ES102 as the height of the setup means that a  scope the length of the ES102 might not even hit the legs at the zenith. With the legs not extended, I can pickup the whole setup including camera and be outside in just a few minutes , thus even a 30 minute sucker hole becomes an opportunity. I have the camera bag on a belt loop with the camera and T-mount, after alignment I will put the EP/diagonal in the camera case.

The 488 head uses quick release brackets and I now have one on the ST attached to a vixen rail. I tighten down the ball head and there is absolutely no movement with the ST80/2" focuser/camera. EAA has taken over my life:) 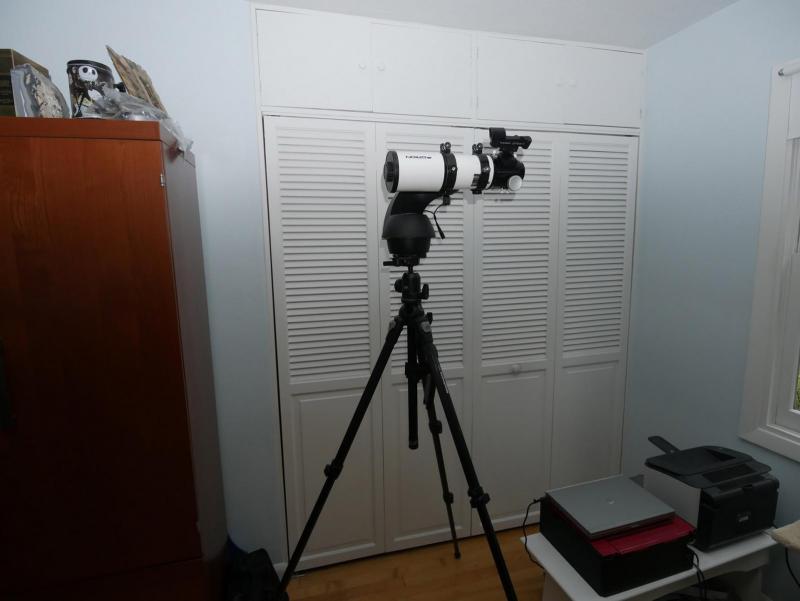 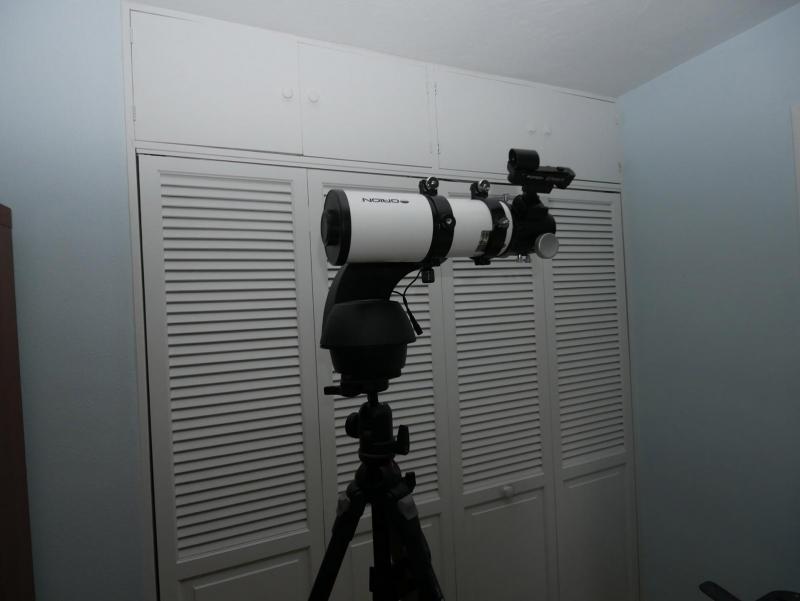 I just want to make sure I understand.

I'm thinking that you do not have a de Mairan's Nebula camera?  More likely cameras with 4/3" size sensors?

Looks like a good and convenient system.  I hope you find it very enjoyable!

Nice setup Jeff! In case you do decide to get an even more rigid tripod, several blokes I know bought cheap second hand eq3 non-goto scopes off ebay or gumtree etc for around $50. They tossed the OTA if it came with it, and just use the sturdier-than-a-camera-tripod eq3 tripod. Also, as the SLT has EQ North/EQ South in the hand control, they've setup in EQ mode using the EQ3 mount head. Having said all that ... it does make it far more complicated when setting up in EQ mode! So I totally "get" what you've done ... great solution for EAA! No laptop required as stacking in-camera, viewing on the camera LCD, no cable intervalometer! Simple Alt Az setup. And all pretty cheap to buy. Beaut stuff!

BTW I am assuming you mean stacking is via the in-camera MSNR (Multi Shot Noise Reduction) which takes 4 exposures automatically stacking in-camera? On my Canon's and Nikon's that feature is only available if shooting in jpeg, and not available if shooting RAW. Not that shooting in jpeg really matters! LOL. I've done it many times and do not see any problem shooting EAA in jpeg at all. The images are still waaaaaay more than one can see by eyeball. Again, top stuff Jeff. Thanks for sharing with us.

Now show us some images!!

Nice setup Jeff! In case you do decide to get an even more rigid tripod, several blokes I know bought cheap second hand eq3 non-goto scopes off ebay or gumtree etc for around $50. They tossed the OTA if it came with it, and just use the sturdier-than-a-camera-tripod eq3 tripod.

Howie, carbon fiber tripods like this Manfrotto are very sturdy and kill vibrations very quickly (that's why they cost a lot, I think this one was a $400 pair of legs when I bought them. The big plus is how light they are for what poundage they are rated for.

This is really a grab and go combination and as much as I have been setting up this scope/mount combo this year, this  a real win for. When I get my SkyShed POD in the spring, then it will be my club star party scope (perhaps with a C5 to match the ST80 with the 2" focuser (pretty close in weight to the C5).

I have a untested, uncooled ZWO 294MC that I might get to use this week. One night I might use this set at a club dark site, on the other one that is supposed to be good I'll try it with the ES102 on  the Sirius. One thing is for sure, a large dew shield and heaters are needed this time of year in Oregon.