After a poor-seeing show with Saturn then things coming good with some tough doubles I went on to get good views of Neptune & Uranus. That turn around got me thinking of Mars which is currently just ahead of sunrise and getting high enough for the D-K I reckoned; (disk = Uranus @ 3.7”); so got to bed till 3a.m. – firstly for those winter/spring stars then to set the finder on Mars.

I knew I would have to get the planet in a dark enough sky for the 50mm finder: similar to early morning efforts with Mercury. Thus tracking it till at least a sliver of the D-K aperture catches it.  This turned out to be some five hours before the meridian. Only 4º altitude then, just clear of the fence for the finder, and of course pretty poor when first seen in the main scope; but soon there was an encouraging definable disk, and gradually there was detail flitting in and out...... by ~06h. UT (alt 7º).

Another 20 minutes and high enough for the ADC to more effectively deal with much of the dispersion.  I resisted using red filters (planning no-filter rendering) as I was getting a sense of some yellowish brightness over Chryse seemingly washing out much of southern M. Acidalium: its distinctive shape being pretty elusive.  At the same time the broad Nilokeras/Lunae Lacus/Ganges shading standing out quite boldly.

Hopefully the rendering will speak for other features and the general impressions.

Much diversion of late – productive observing but not had much opportunity for posting here recently and a fair number of good nights to report on when I can........One (Oct 1/2) nearly perfect, had me up till daybreak after being up since 4 a.m. previous day.   A fair number of sketches from that and will maybe put a selection into one thread. 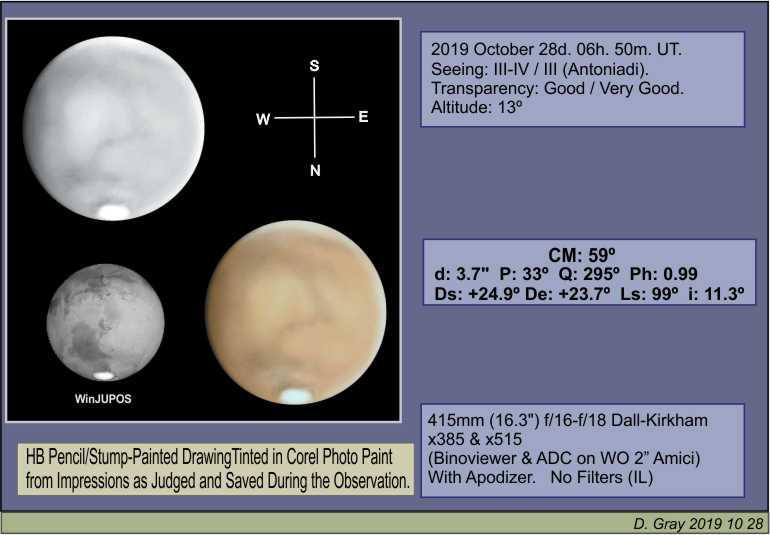 Impressive work. Decades ago I occasionally recorded my observations in a notebook, sometimes including a sketch or photograph, but now I just observe to enjoy the view, fleeting though that may be.

I tried the other morning to catch the war god. Was treated to a beautiful scintillating mess. It was mesmerizing! Wonderful  sketch you made!

A nice view of the Martian northern hemisphere in early summer.

When I just saw a little point, you sketch a map!

Wow! When I saw the "rain dirty valley, you saw Brigadoon"! Great sketch and observations David.

What was telling with the views that night is, as on a good few other occasions, how quickly things improved with a

south-retreating intense band of the jetstream.  Very poor in the early evening with Saturn; then more and more

encouraging through to the reasonably fine view of rising Mars.

Spotted some errors in the middle (Data) panel: now corrected.

The jetstream is messing with things big-time here - so much rain.  We have had some fairly transient high pressure systems: under one now and managed my second view of Mars this a.m. with decent seeing giving fair detail.

*Mars Returns*.....but likely being diminishing returns as the planet ever slides southward for some months yet........but will keep on looking.........

This morning, as the seeing steadily improved, the bright NCP was soon detected, then, more fitfully at first, Syrtis Major; and it looked as though Hellas was showing at the sf limb as bright cloud-filled.  This can, and has many times, fooled the unwary into thinking it as being the SPC; tho’ this a.m. too much askew relative to its northern counterpart to fool any but the rawest beginner maybe.

Within the limitations of the small disk things looked pretty normal..........Syrtis Major perhaps still not so wide as before the dust storm last apparition.  I await the return of the longitudes, reported in my OP here, where I suspected Chryse dust affecting M. Acidalium.

16 degrees, 3.8" nothing short of amazing sketching.

You're quite early aren't you? opposition is still 11 months away

At those sorts of disk sizes it can be tricky getting precise shapes of features and with that tend to be sketched more generalized.  It is the subtle contrasts that more grab me (esp. Uranus).

Even with the magnifications I favour for most of my planetary work: preferring to catch the crisper spells even if they are mostly no longer than ~1 second; enough of those allows that mental stacking.  That discipline I find more result-giving than the more fine-detail-denying aesthetics (for some) of lower powers (200-270x on the D-K); likewise with stopping down the aperture.

And a similar one with Uranus: (Similar disk-size to current Mars.........see that view from that attached below)......

There is a lot to see with at least average eyesight on the naked eye Moon – much more than I show on the linked renderings.......of course it would take perfect seeing to get near that definition on a <4” planet’s disk in the scope. 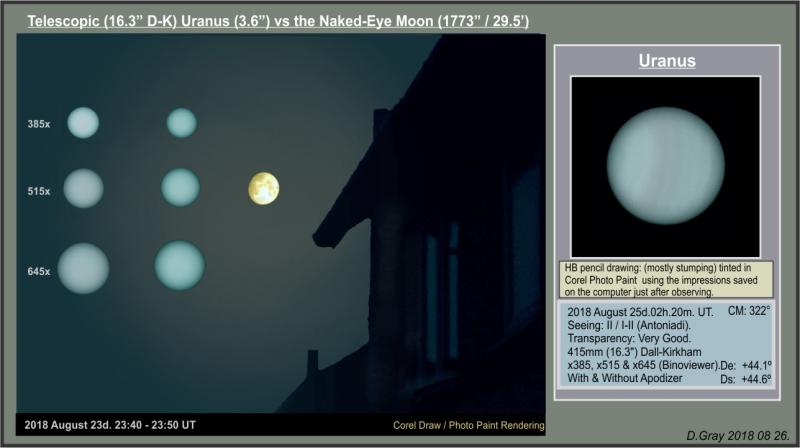 This morning’s clear sky was not forecast and the ‘Now’ panel showed not even partly clear.  Soon as

I slid the roof down the wind picked somewhat stronger than the already stiff breeze.

Mars on both dates was cycling through boiling to blur to crisper: the latter the briefest, but detail was

enduring long enough and sure enough for patient rendering. 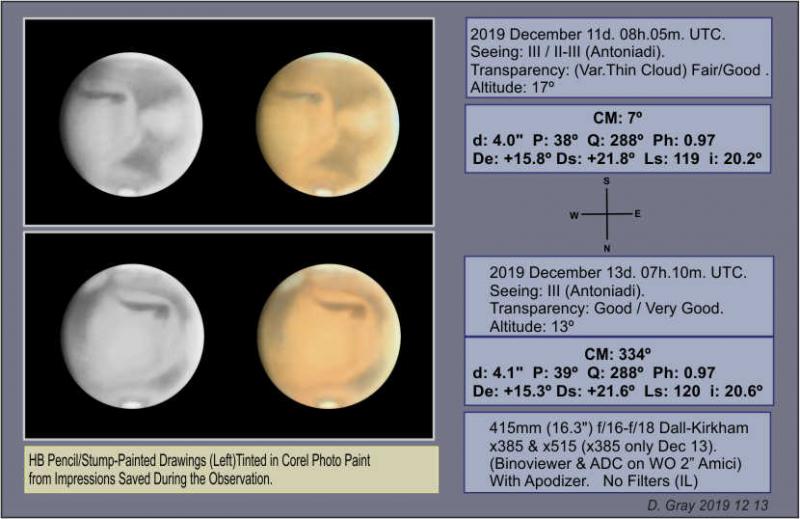 If memory serves me, that Martian feature Sinus Sabeaus looks very good in your sketches, David.

Many small scale changes since this was made but the main features are quite recognizable.  Note that

Thank you Tom and again you all for the comments and Likes........

Fabulous observations given the current distance

Not a bad start considering........but I reckon as it gets further south  - and in

lighter skies - things will get tougher until well into Spring I guess.

Very nice observations, David. I have not seen Mars, but if it looks that good...I cannot wait.

Getting what I can before it souths into coming lighter skies mid-Feb (till higher mid-April).  So far it's made up a little

for what I was denied numerous times the end of last apparition in poor western skies; even though at good altitude then.......

A very nice frosty morning with good steady spells.  Very much the opposite of yesterday that was somewhat under the jetstream, mild and the wind picking up to blustery and so a fuzz-ball (10-50+ arc sec!!) Mars....

Mars’ disk is getting to a size where more sure colour-differentiation becomes possible – as with the steadier spells this a.m.

Still fine and clear out there now 01 p.m. and think I’ll seek out Venus in hope of those fine conditions still in effect – after dinner that is. 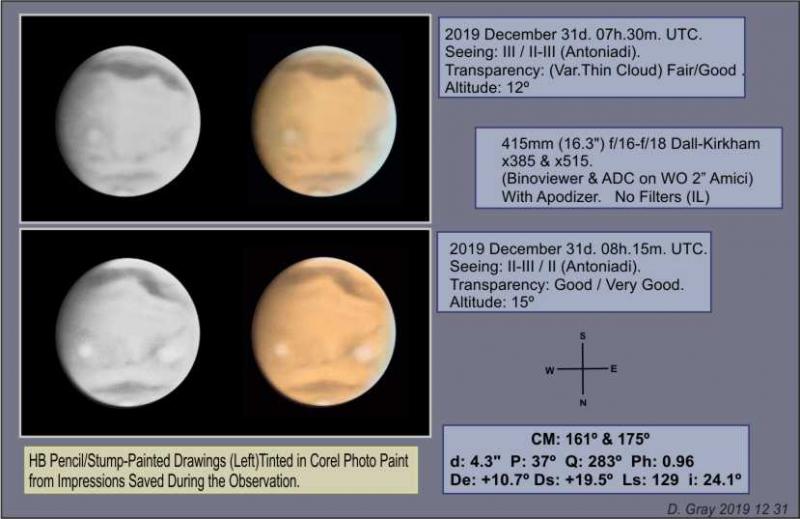