It’s a Miracle!
I have been out observing on each of the last five nights racking up a combined time outside of over twenty hours – It’s a long time since I have had such a good run. I have written 17 pages of notes during my sessions too…
I have observed many objects of different types during this time outside. So, I am going to divide up this report into object type sections so you can scroll to objects of your favorite kind…

Planetary Nebula.
First up planetary nebula, this is an object type that I rarely write about but having bumped into a few of these while out nebula hunting with my 5nm narrowband Ha filter combined with my PVS-14 night vision, I decided to build a Sky Safari observing list based on “The Brightest Planetary Nebulae Observing Atlas” by Massimo Zecchin and get out and observe them with a plan.

The eyepiece attached to the PVS-14 for these observations was a 27mm Panoptic yielding x77 magnification.

NGC6826 (Blinking Planetary) – Very bright solid ball with a thin halo of lighter shade.
NGC7027 (Magic Carpet) – small bright ball, there is either a fine line running through it or it is two-toned. Has a detached faint circle around it.
NGC7048 (Disk Ghost) – small dim circular patch made up of “dancing lines”. Looks alive.
NGC7026 (Cheeseburger) – Tiny and bright. Made of two patches with a haze on either side. Reminds me of an “overhead shot of a rowing boat with oars out either side in the water”.
NGC7008 (Fetus) – small dim, almost square shaped patch. Black circle at center then dominated by thick bright outer layer (does not go all around the outside).
NGC6905 (Blue Flash) – tiny, dim patch made of moving lines. Looks brighter on one side.
NGC6543 (Cat’s Eye) – small bright patch. Tiny dark spot in the center. Seems to have a thin layer of lighter dancing lines all around the outside.
NGC7662 (Blue Snowball) – tiny. Very bright solid ball. There is a faint detached outer circle.
NGC40 (Bow Tie) – Excellent. Very bright with two curved sides. The inside is filled with fuzzy stuff that is leaking out from both ends. There is a small circle at the center.
M76 (Little Dumbbell) – Looks like a “box kite”. Brighter patches at either end, connected by fainter central oblong section.
NGC1501 (Oyster) – Tiny and bright. Looks alive. Reminds me of a bright “woolen ball”.
IC2149 (Red Sword) – very tiny but bright. Has a small circle around it.
NGC1514 (Crystal Ball) – star inside a black circle with multi-toned nebula shell encircling that. Nebula is multi-lined and shimmering. Looks alive.
NGC7139 – Small mesmerizing ball. Shimmering jumping lines within. Alive.

The "alive" planetary nebulae are great to look at, they are literally moving and dancing around in the fov.

Comets.
Another object that I has not been on my radar for several months! Well, I managed to find three over the last few nights.
C/2017 T2 (PANSTARRS) – With the 55mm Plossl (x38) it was small but easily seen.
C/2018 N2 (ASASSN) – With the 27mm Panoptic I found a decent sized fuzzy blob to the side of a star. It was easily seen and the best of the three.

C/114P Wiseman-Skiff – Even with the 27mm Panoptic, this was a tough object to find. I needed to turn the gain up to the max but I found it exactly where Sky Safari said it should be!

NGC6946 (Fireworks) – With the 55mm Plossl and no filters, I could see the twin fingered arms coming out from the core around the back. I got hints of a third fainter arm coming out underneath.
NGC6643 – A small galaxy. You can easily see the core and surrounding halo. There were some faint anti-clockwise arms beyond the halo but they were tough to see in direct vision.
NGC6503 – small and bright. Slightly edge-on. Tiny bright core with large halo surrounding. Hints of black lanes within the outer halo.
Stephans Quintet – All 5 galaxies easily seen with the 55mm Plossl (x38). There was even a sixth galaxy in the fov (NGC7320C)!
NGC7331 – bright core, slightly dimmer halo surrounding. Swirly fainter disc beyond that. Hints of a lane top-side and a black patch (usually signifies that arms are there) behind core on outer edge. I could see the four “flea” galaxies that sit to the LHS.
NGC891 – Wonderful. Large edge-on galaxy with swollen core section and thick black lane running its full length in direct vision.
NGC751 – A strange one, with the appearance of a double-core. Sky Safari says its two galaxies NGC750&751).
M74 – At first I see a mid-sized fuzzy patch but I keep looking. I see a circle around the core appear first, then an arm seems to leave at 3o’clock and curve up and left. Then I see another arm at 9o’clock going out and down anti-clockwise. I note a four star rectangle and add it to my reference sketch. I can see images that confirm the arms on the internet.

IC10 - I had already observed this underwhelming galaxy earlier in the session when I happened upon it again by chance (whilst I had the 5nm Ha filter fitted and was just sky scanning) and found it as a pleasing patch, it was only when checking SkySafari that I found out it was the IC10 galaxy that I was looking at. It appeared so much clearer with the Ha filter that I wondered what the bigger galaxies on offer would look like in Ha?

Andromeda & Triangulum in H-alpha?
I have written about my experiences with M31 and M33 many times before, so I won’t be repeating myself today. Instead, I want to talk about an H-alpha experiment that I carried out over a couple of hours with M31 & M33 as my targets.
I loaded my Chroma 5nm Ha filter into the Paracorr2, then added the 55mm Plossl for maximum image brightness and pointed at M33. To my surprise there was a very large galaxy sitting in the fov with many fuzzy shapes abounding. It took a few minutes to take it all in and start to recognize NGC604 and work back from there…
With no Ha filter then the big reverse S of the main arms is clear in direct vision, now the arms are not clear but if I look carefully then I can trace tiny Ha patches that are marking out the arms in the fov. I decided to start sketching these patches and add the occasional curve where I was seeing “implied” arm structure.
It was quite a surprise just how far out from the core some of these Ha patches are located, signifying that actual physical size of M33 is larger that we may think when visually observing our neighbor.

Here is my sketch: 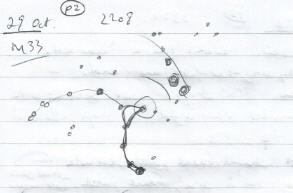 Onto M31, where the results were less impressive but I was able to see the galaxy and some Ha components within so it was not a waste of time at all.
I noted three Ha patches in the upper sections of M31 but it was the lower sections that were a bit of a revelation.

Regular observers of M31 will know that it’s a dead loss below the core to see very much at all! Well, in Ha the lower section can match the upper section and in fact I saw a greater number of Ha patches in the lower section including a couple of really big ones.
Here are my sketches of the two halves of M31:

Nebulae.
I spent many hours looking at the many large and small nebulae in the Milky Way from Cygnus to Orion. I have written about them many times before and will not do so today.

I was also able to spend some time scanning the “empty spaces” in Sky Safari looking for objects that I could find with the night vision and marking them for the AG1- object catalog that I am continuing to work on.

Time to catch up on my sleep.

The weather forecast seems to say wet weather until full moon, so it looks like I will be stuck inside for the next couple of weeks, guess there is no pleasure without pain!

Wow, 5 clear nights? All I can say I envy you. We had basically 0 clear nights here during this New moon cycle

so no observing with big Dob here.