Morning, on a day trip to an old optic store, found this one.

Evidently tested to 1/50wave on the mirror, used by students to help NASA back in the 60's to find sutable landing area's for the Apollo missions.

I don't have an observatory dome, might make a nice up in the woods cabin scope,

Anybody know anything about these?

The old astronomer that's the proud owner of this scope has had it since it was new, said it all fits in the aluminum box on the floor there next to the scope,,,,

A beautiful old scope with a very interesting history.

If the price was right, I'd be tempted...and promptly acquire a small shed in which to keep it.

Way overpriced in my opinion. It may have bee used with students, but I would take the story with a huge grain of salt. The size is going to limit the amount of meaningful detail that NASA would require to determine landing sites.

It does seem to be in very good condition.

It would be a matter of intrinsic value as a collectable, certainly not a performance price. "NASA" is often a name dropped on telescopes with accompanying over pricing. The case looks like a typical case of the time, commercial mass produced. Optics claims of 1/50 wave are pretty much absurd, and don't have any bearing in reality for observing even if it could be proven by acceptable manners.

It IS a beautiful scope though.

NASA built it's own dedicated landing site observatory in Huntsville, I don't recall any student-effort at landing site location.

One reality from the golden age of Newtonians (1950s through perhaps early 1970s) is that optical quality varied considerably.

Those "classic" big Newtonians are best suited for an observatory. In spite of their size and weight, I found the mounts disappointing.

I also have a 6" f/8 ANRA which was beautifully restored by a fellow CN'er.  I love the ota and the optics but have a real love/hate relationship with the mount.  Pretty finicky.  The optics are, hands down, the best I have ever owned in a 6" scope.

I think I bought it for around $200 which was, admittedly, an excellent deal in my mind.

One reality from the golden age of Newtonians (1950s through perhaps early 1970s) is that optical quality varied considerably.

That statement is actually true of any telescope design of any period in time.  I still see optical quality all over the place, today, regardless of price point or telescope type.

The old astronomer that's the proud owner of this scope has had it since it was new, said it all fits in the aluminum box on the floor there next to the scope,,,,

I would like to see a photo of the telescope packed away in that box shown in the photograph.

The Unitron has a long history of intrinsic value, along with a lot of quality in side by side with the same vintage and size.  The recent eekbay 152 SOLD at $3900 with shipping is a bit lesser than the referenced $4600 one, and shows consistency in pricing. A long history in pricing makes a statement.  Occasionally some one tries to pump up a scope with an inflated price that doesn't fit what has been consistent with sales. Some recently. Comments from the experience in this forum will usually quickly call out such with reference, and yet discussion. Inflated 'pump ups' associated with CN then often fall in price. All typical actions within sales, pricing, demand, discussion, comradery, desires, fluke deep pocket auction bids, and such.  It is unlikely the seller of the highly inflated O.C. has reference to this forum input, and many times such pricing is simply from ignorance and a guess.

That’s got to be the most decked-out OC Discoverer I’ve ever seen.  Also in very good condition.  While not worth $1500, it might be worth $500-600 considering all the accessories.  I don’t remember OC offering a tray.  I wonder if that’s a Meade tray?

The 1” shaft mount castings were made for OC by Pacific Instruments.  It’s a decent mount for lighter Newtonians, but the 8” really pushed the envelope on stability.  With the guide scope, even more so.

In those daysof the "Space Race", 1960's there was a lot of student involvement just to boost patriotism, many sub programs at school's I remember many nights in Jr. High out on the baseball field looking up through the science  teachers  6" scope, it looked huge to us.

Interestingly enough he was a member of the "Flat Earth Society" too, made us all chuckle a bit, our school had a few small refractors that could be checked out for the weekends, the skies were a lot clearer then, Jupiter was my first light discovery then and it still holds me to the eyepiece now.

I don't know how much truth is in the guy's story, but would you begrudge  an old astronomer his glory days?

I wish I had more time to spend with him,

Whether or not facts are embellished about the mirror, I wouldn't know,

Would I personally pay that much for an 8" ?

Only if there was some documentation of it's past and of it's optic quality.

I just accepted request to list it, it's up to him to sell, it is a beautiful scope in pristine condition for its age, near 50yrs give or take.

I don't have a camera that can get a real clear pic of the write up, do what you can with it, sorry.

I had a Meade 8" on a very similar pillar mount in the early 90's, battery powered clock drive, that's the scope I learned polar alignment, and found M57 with only Will Triton pointing the way.

The NASA story that goes with it seems concocted... and probably the 1/50th wave claim. But heck, it's only $1.5 kilobucks... ; snap it up! PS: Re' the ~NASA designed PM box~ That's a generic box with probably a handmade insert. Reminds me of this box I made for my PARF that attaches to my 36-inch Primary Mirror! >>> ~click on~ >>>    Tom

I have a Discoverer.

I bought it in a 'basket' about 10 years ago from local amateur Al George for $500. Really nothing to putting it

back together and nothing was missing.

It's a fine telescope, very user friendly in every way.

Fabulous mirrors. The Optical Craftsmen Mr. Nelson had working for him were best in 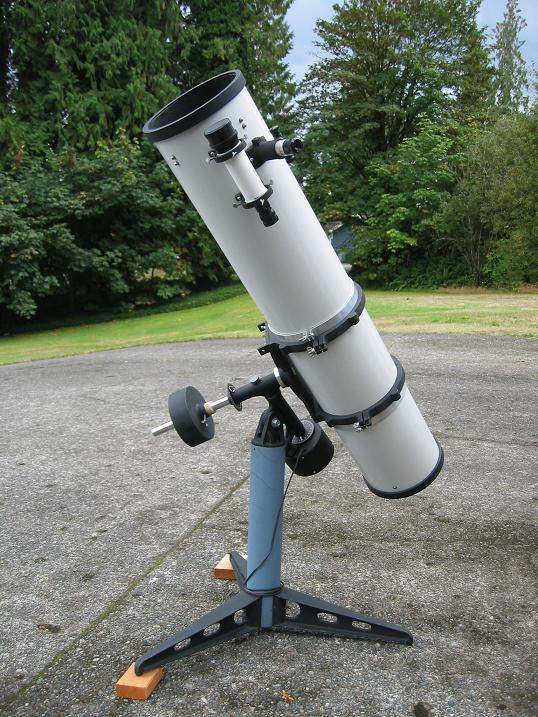 SloMoe may not have seen this.  others can just skip it. This is the one I still have everything for.

Folks I'm locking this up, the OP isn't the seller and I've learned that the seller doesn't even have an ad published for it, so there's nothing we can do here.