Mercury's Progress Through the 2019 Transit

I feel fortunate to have seen and recorded the transit--I know lots of people were dealing with solid overcast and/or frigid temps, wind, and snow around the US (and Europe).  The clouds were a nuisance but the temperature in Virginia started out a little chilly but climbed up into the 60's by late morning.

I missed first and second contact a half hour after local sunrise due to clouds and trees but saw the rest of it.

Mercury was much more visible through the clouds with my 40mm PST @ 33x than with my grandson's 82mm f/7.5 reflector.  The white light mylar filter on the reflector dims the Sun so much that often the solar disk was made invisible or nearly so by the clouds while it was visible at the same time with the PST.  When the Sun was visible using the reflector, I couldn't see Mercury at 10x--I had to bump it up to 30x before the tiny black dot was visible--and it would come and go with the seeing (which deteriorated near the end of the transit as the clouds got thicker).

The sketch is a line drawing/schematic (I might do a color version later if the weather stays bad and keeps me indoors) and the best I could do in the field.  It was hard placing Mercury's position because the solar disk appeared featureless.  I could see one small bright prom on the southeast limb but no other proms were visible--probably too dim to detect through the clouds.

Once Mercury appeared through the thin clouds, I tried to mark its progress in front of the Sun every half hour.  Since I started at 33x, I kept the magnification at that for the sketch, although I would occasionally increase the power to take a closer look at things--I was using my Baader Hyperion Mk III 8-24mm zoom eyepiece.

I planned to do a separate set of sketches of egress but the clouds thickened and the seeing tanked just before it started.  It was only a minute and 40 seconds between third and fourth contact so it happened really fast.  About halfway through it the seeing and transparency turned to mush and Mercury disappeared even though it hadn't made fourth contact yet.  Oh, well.

I may have rendered the tiny dot of Mercury a little bigger than it really was--I don't have a circle template that small (.03 inches) so I just did it freehand.

Since the transit occurred on Veteran's Day (Remembrance Day/Armistice Day in other countries) I want to dedicate this sketch and observation to my father, T/Sgt Reynold R. Rosolina, DFC, Air Medal with 5 Oak Leaf Clusters.  He is buried with my mom at Arlington National Cemetery.

I've tried and failed to see the previous three Mercury transits going back to May 2003 so I was lucky and very happy to finally catch this one. 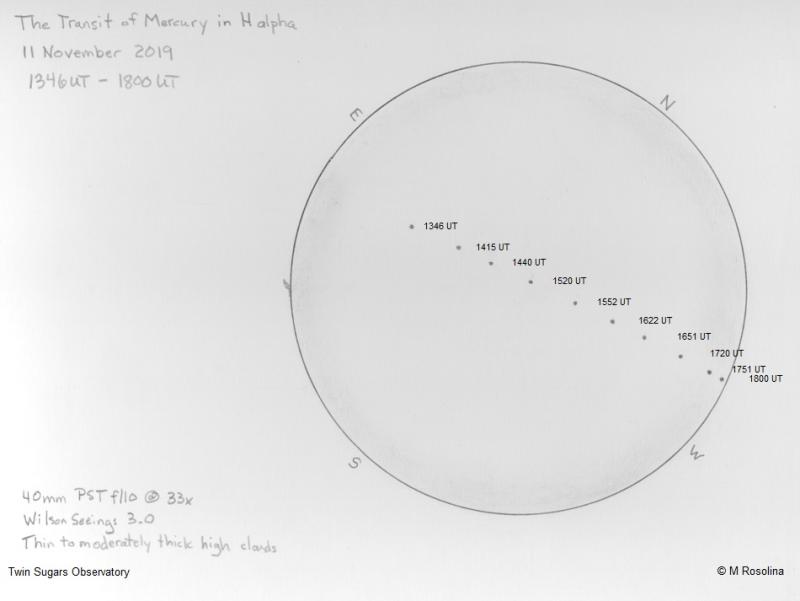 Thank you for sharing with those of us who saw nothing due to weather and other factors.

Very nice sketch of Mercury's (Progress Through the 2019 Transit)

Martin, Tom, and Ian--thank you.  It's been interesting to see all the different images, sketches, and reports by people from all over.

Thanks for the likes, everyone!

I really enjoyed reading your write-up and especially your dedication to your dad. I was very nice to see your sequence here.

I was also able to observe the transit beginning about 8:30 Mountain Time  after setting up. I recorded this about the same way you did. I drew a circle on sketching paper and added a faint line track that Mercury would follow. I took camera images at irregular intervals and then plotted there locations on that line when it was all over.

The previous two transits of Mercury I was able to observe back in Chicagoland.

Thank you, Frank, for your very kind words.  I'm glad you got to see the transit from Arizona and lucky you to see two others.

These were my recordings.

On the morning of November 11 I observed the Mercury transit across the Sun. Because of my location I was seeing the Sun and Mercury for the first time about 8:20 am local time as they cleared the buildings and trees.
For my set up I had two Dobsonian telescopes set up each with homemade Baader filters. One scope was my daughter’s 10” Orion f/4.5 scope the other was a 4.25” homemade f/5 scope.
During the interval of the transit I had some neighbors drop over to see what I was doing  and they each got a look at the event.  My wife was also present and she also was interested in viewing the transit. I took pictures of the transit but not at my pre-selected intervals.
I was especially interested in determining the time of 3rd and 4th contact but due to turbulence I was unable to get 4th contact at all. With the aid of shortwave broadcast on WWV out of Ft. Collins Colorado
I determined the 3rd contact to be at 18:02:56UT. Officially I was somewhat too late on 3rd contact. 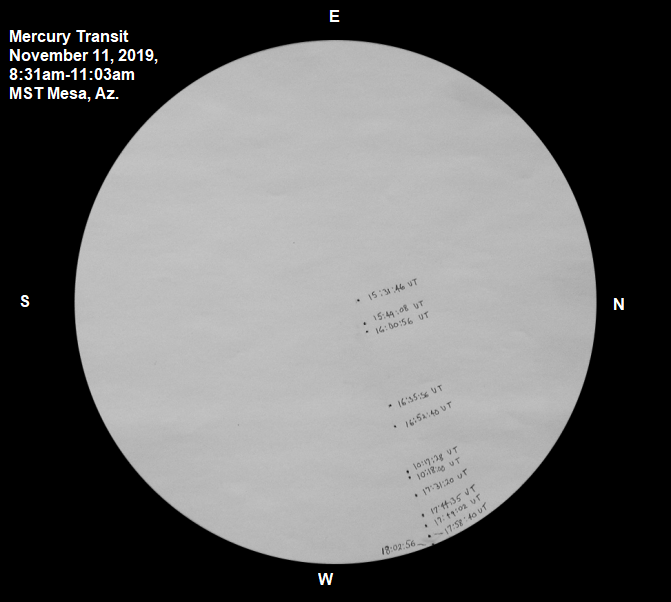 Special Ed, an excellent report and sketch. Here in eastern Maryland we had great weather with some high thin clouds Here's my version of the transit thru my 4" f5 refr.

Sorry to take so long to respond to your postings--the weather has been good here so I am working on getting in the last of the firewood.

Excellent sketches from you both and very nicely presented as well--mine is quite rough by comparison but thanks for the compliment, Rich.

And you got to see the transit from start to finish!

Frank, it sounds like what happened to me on fourth contact also happened to you.  As far as your timing of third contact being later than the official time of 18:02:33 UT, Fred Espenak says on EclipseWise that the contact times are geocentric so they are only correct for an observer at the Earth's center.  The contact times actually observed can differ by as much as two minutes due to parallax.  My observation of third contact was 18:02:01.

Thank you for sharing your transit experience here. We only observed a portion in Hawaii as the sun was rising and the transit already in progress. I had to work that morning so took binoculars and filters to an area I could see the the sun just as it came over my mountain.  I was satisfied to have observed it even if it was a tiny dot in the 7x50’s

Ed, memorable dedication to your dad. We have a lot to be thankful for the sacrifices made. Your comment about the timing differences for contact was also interesting information. Thank you

Thanks for your kind words.  I'm glad you got to see it, too.  It must have appeared mighty small in 7x50's.

I was clouded out so thanks for sharing

Michael, it was indeed a tiny point in the 7x 50’s. I had to call a friend to help determine where to look for it!