I thought that it might be of interest to you that I do an article/ thread on the above title.

Over the past ten years of operating my mini tower I've enjoyed the use of both Alt and AZ clutches and since I purchased my AZ pro I have missed not having the azimuth clutch so set out to see what I could do about it.

Upon pulling down the mount I discovered that there was nothing I could do to the present/stock AZ axle/base plate and ring gear to install a clutch so the decision was made to build a complete new axle/base plate and ring gear along with the clutch parts. This was obviously going to be a time consuming and exacting and expensive project but ahead I progressed. At this point I decided to get some help from a good friend (Peter) of mine who is very much like me in that he will have a crack at anything.. he has a workshop like mine with a lathe/mill and other machinery so between us we had the gear to do this job.

First thing to do was some drawings and lots of measurements. These sizes had to be exactly the same as the stock axle so as the complete system could slot straight into the mount casting in place of the stock unit, just tighten up the top nut and then it’s finished. I can say we achieved that and its running like a charm and I must say it feels good to have my AZ clutch back again.

To be able to add a clutch to this we had to make the triangular base and axle in two parts not like the stock unit which is a one piece casting. Having the axle by itself enabled me to machine a flange which is required for the ring gear to have something to push against (part of the clutch system). Then the ring gear can be installed along with the teflon washers and this assembly then fits into the triangular base with a snug fit and 3 M6 grub screws hold it together,

The photos will show all this ... both the axle and base have three slots machined to enable the three pronged item to slide in , tighten the knob which pushes the prongs into the ring gears and in turn that finishes hard against the flange I mentioned before and hey presto we have a working clutch.

The ring gear was made at Peter's workshop as he has a different mill than mine and all the gear to make this item... in saying that though we had to import the correct cutter to cut the slots / teeth... this had to be machined exactly like the stock unit so as it would mate correctly with the stock worm gear.. everything worked out fine and I couldn't be happier. It was a long project but well worth it. Not sure why iOptron chose to not have an AZ clutch in this mount. My only guess is to do with cost as this would have pushed the price up to a different bracket that they would be wanting to sell this mount. I have noticed though that some of the other manufacturers going the same way also in leaving out this clutch.

After talking to iOptron about the project I was going to do they supplied me with complete pull down article of the mount so thanks very much to them .  The article was very helpful.

Also many thanks to my friend Peter for his help throughout this project.

If anyone has any positive and or negative comments about the making and the finish of this project feel free to speak up.

This first photo shows the stock AZ system where the ring gear is fastened to the base by three screws thereby resulting in a fixed assembly. More photos will follow 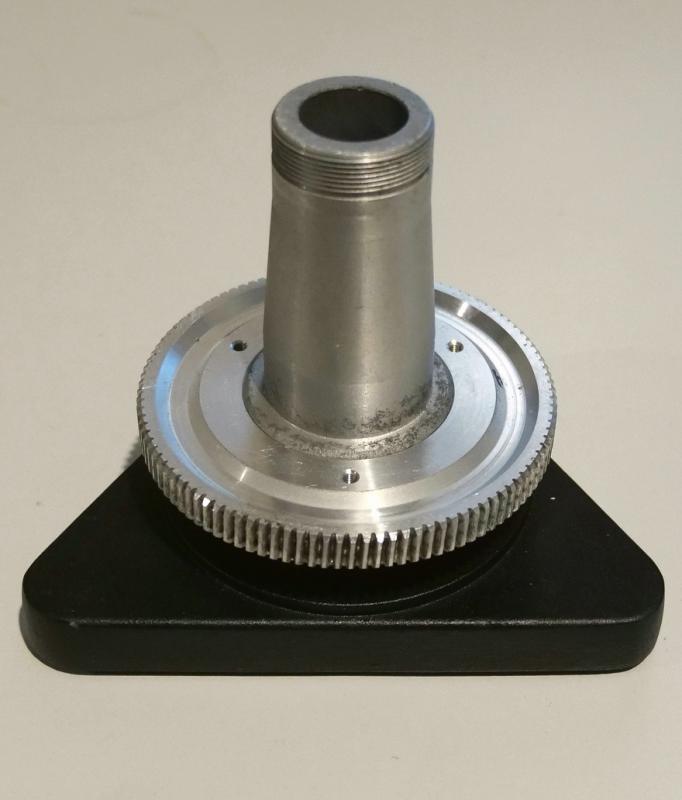 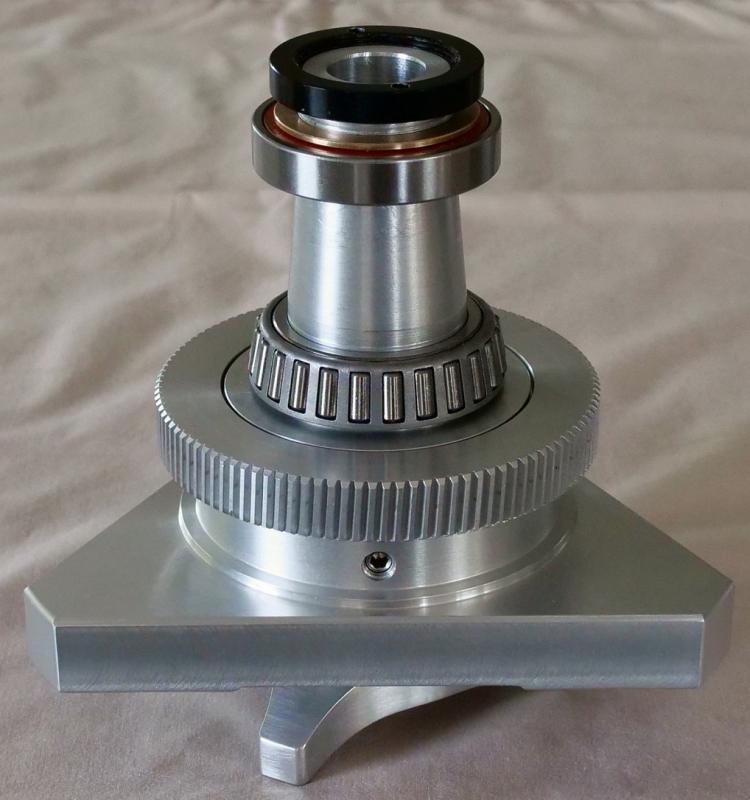 Here it is fitted into the mount. 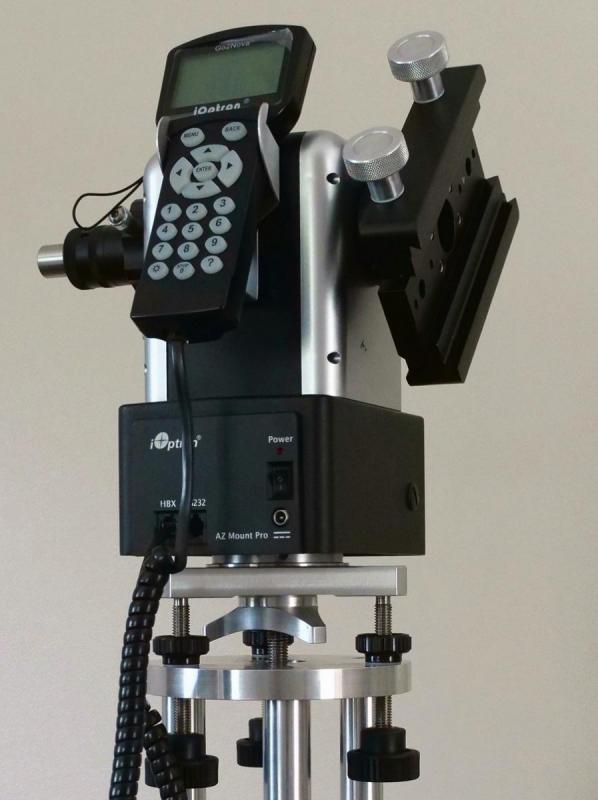 When will you start the mass production?

This is the bottom view of the assembly 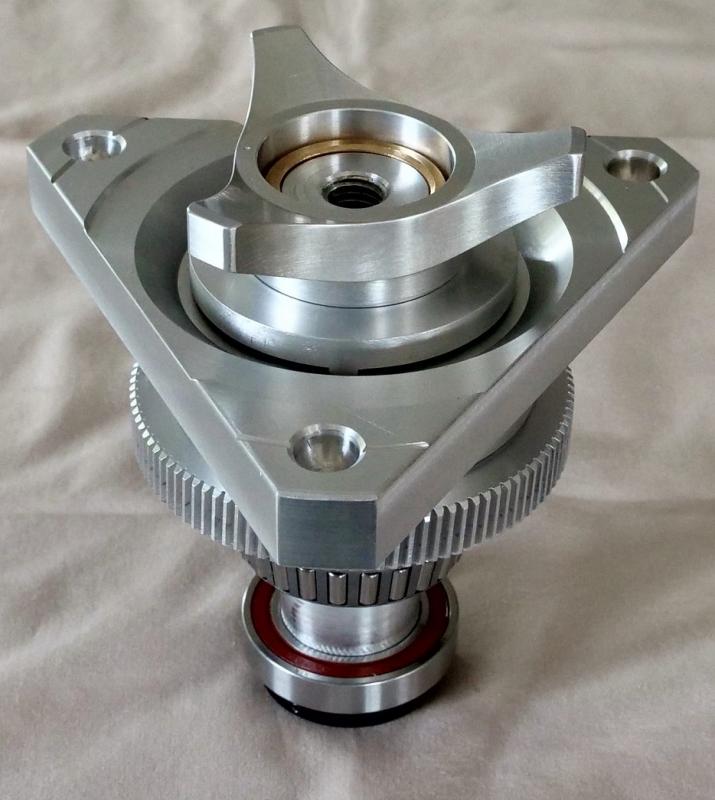 When will you start the mass production?

Ha Ha, you are always quick on the jokes.

Good to hear from you again Arne.

To be honest the only way this would be viable is via CNC machines ... we built this via hand operated lathes and mills ... a lot of work and very time consuming but I might add again very satisfied with the result.

A photo of some of the parts 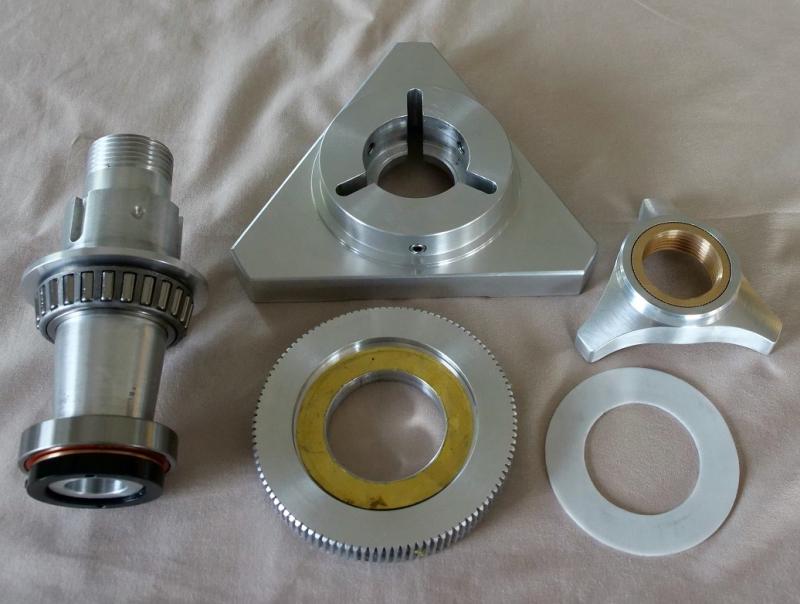 Something I should have said in the opening posting... This complete system was designed as a straight swap for the stock items.

Just remove the top (black) ring nut from the azimuth axle and remove the assembly by pulling out thru the bottom of the mount.  The top bearing stays in place . you then remove the bottom taper roller bearing from the stock axle and slide it onto the new assembly and just slide the lot back into the mount and refit the black ring nut.

It takes me about 15 minutes to remove and refit.

If Ioptron offered the AZ Pro built like this my guess the retail price would be about $2000.

Here is the mount I'm looking for, is it a good one?
Thanks in advance

Here is the mount I'm looking for, is it a good one?
Thanks in advance

Your question..”is it a good one”

Its nicely built being one piece casting. Stepper motors belt driving the worms which makes it very quiet indeed. In my case it’s been reliable so that’s all good... it’s very simple to service and pull down once you know.

And having a built in battery , Wi-Fi , GPS etc , what more do you need. It certainly does it for me.

If Ioptron offered the AZ Pro built like this my guess the retail price would be about $2000.

I think the sale price for the head/mount only in the USA is around $1000 so there’s no way it would double in price for what I’ve done. They would do this way cheaper than I could. They would be using CNC machines and pump them out rather quickly... for me it’s slow as you go but I don’t mind as it’s just a hobby to keep me busy in my retirement years. It’s fun and my friend and I really enjoyed this project, keeping our fingers crossed that we got it right. We did so we are happy chappies.
Next year,well, maybe a full mount will be on the horizon .

Thanks for your positive remark.

does it improve the stability on the AZ Axis, too?

Now iOptron have the parts they need to mass produce this improvement. Price increase would not be dramatic.

does it improve the stability on the AZ Axis, too?

I don’t have any issues with stability but in saying that I did replace both the bearings with upgraded versions. While the mount was pulled apart I thought why not do the bearings , it makes sense. The new bearings are shown on the photo I show of  “my version”. Not sure if these bearings made any difference but as I mentioned stability is not an issue for me.

Now iOptron have the parts they need to mass produce this improvement. Price increase would not be dramatic.

Your on the ball Arne. I agree about the price increase, if it was made from scratch with this sort of clutch , would not be that dramatic..

It could also be made as a straight swap kit set . We considered the kit set approach and took that into account with the design but as I mentioned before it would have to be made via CNC to be viable.

I might add the only stock part I was able to use was the black ring nut that you can see fitted to the axle top in the photo of my version.  I did though,  lift that up a bit with a thin brass washer that also shows in that photo. This was done to make it easier to get the Allen key into the tiny grub screw fitted into the side of this nut.

Thanks mate for your positive remark.

I've had a request for a little more detail on how the clutch works  here are a couple more photos showing the three pronged item I mentioned earlier that slides into the bottom of the base plate into the machined slots and when the knob is tightened this item is pushed against the ring gear which in turn snugs up hard against the flange that is machined in the axle. 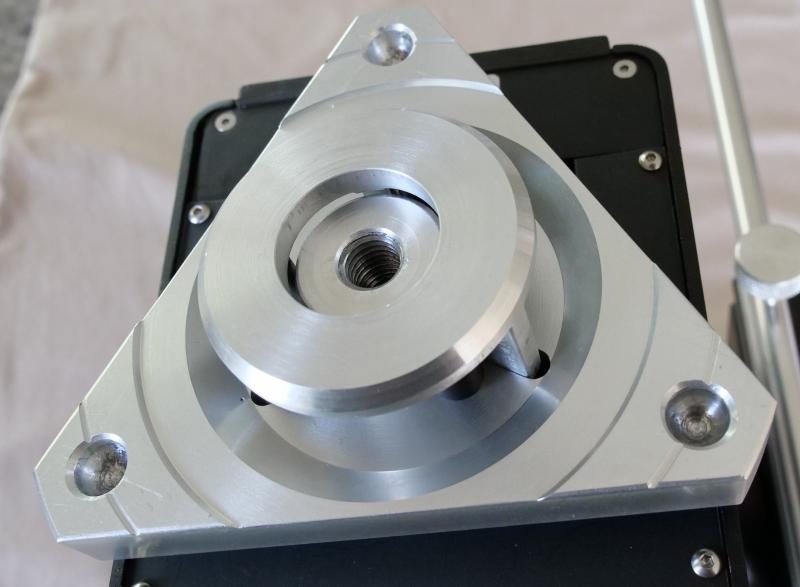 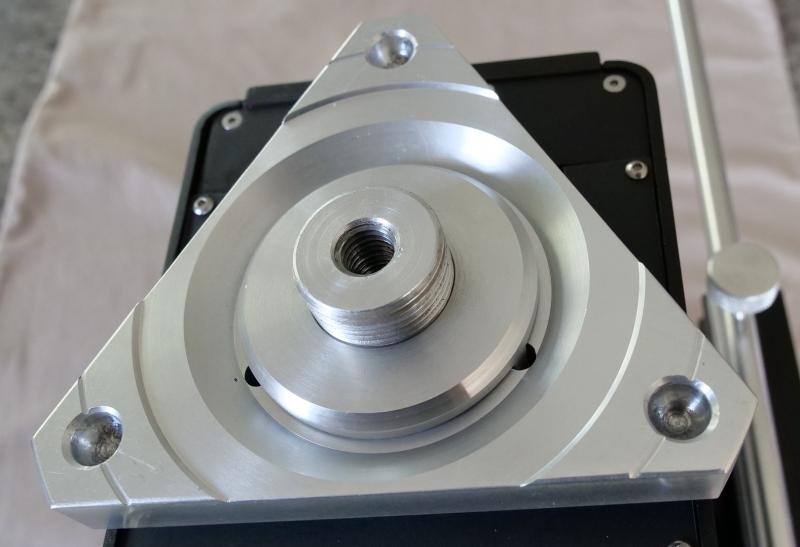 Finally I had to make a new bottom plastic cover for the mount as the stock one would not fit over the circular section of the new triangular base.. I could have machined the stock one but I wanted to keep all stock parts as factory.

Here is a photo of both covers. The left is the stock unit... After using this modded mount for some weeks now I cannot fault the clutch operation and of course it now allows me to perform the "shorten the leg trick"  I wrote up, to achieve correct AZ balance so positives all the way with this mod.

Just a follow up on the using of this AZ clutch for the past 4 or so months.. I have noticed  a very small bit of backlash in the clutch operation which was a  small amount of extra clearance I had milled in the slots to take the 3 pronged item that works as the clutch. I was able to remedy this with a small shim and now all is well.

I have also been asked for a photo showing the complete clutch assembly positioned in the mount from underneath. Below is one I took when this was under construction. 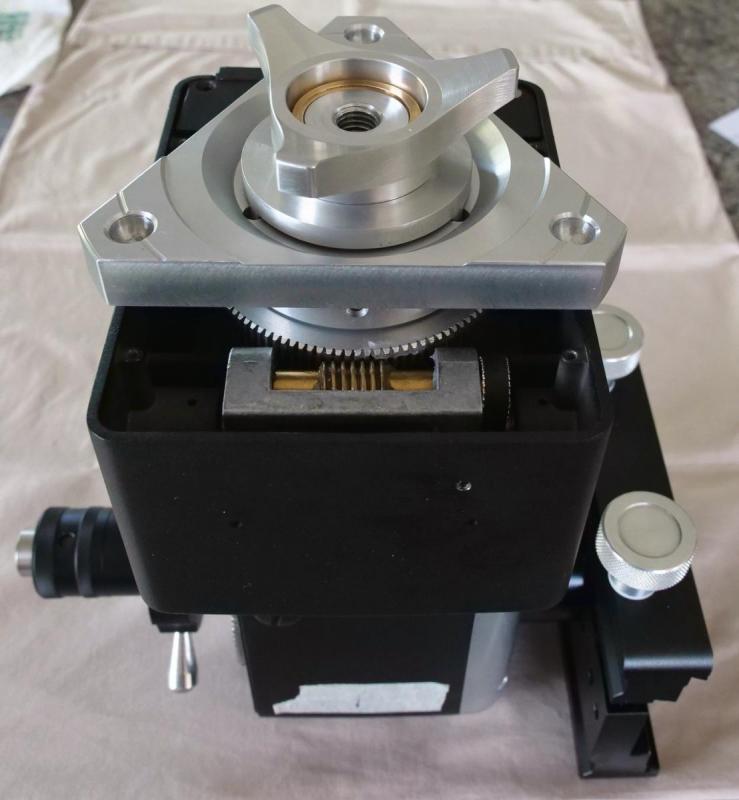