This is my latest M31 Andromeda Galaxy attempt in LRGB with my FLI ML16200 on my Takahashi FSQ-106.  For this image I planned a more careful choice of exposure times than in times past.  I started with calculation of optimum exposure time given my typical sky fog conditions, targeting read noise contribution of about 5%.  I think those numbers for the L filter came out to be on the order of just 30s, and I increased this to 60s as part of the balance of number of frames, managing accumulative download times, etc.  For the color frames I set 1x1 binning as I wanted to examine the quality of straight RGB processing with L absent.  For those channels I arrived at 120s exposure, thinking that 2 - 3 times the L exposure would be adequate and close to optimum for those filters.

As a result of using exposures shorter than I have in the past, I was pleased to see that the stars were less saturated, and the galaxy detail did not at all suffer compared with previous M31 images.  This is a target I tend to visit annually as I am usually trying out new equipment or processing techniques as well as wishing to gauge how much my acquisition and processing skills have improved or deteriorated year to year.  I will claim that I am still seeing marginal improvement on both counts, however by no means will I declare that I am done learning nor am I done improving.  (And I hope you say the same about your skills!)

The straight RGB image seemed to me to be unfinished, likely due to the aggregate luminance of the three channels not receiving the same amount of integration time as the full luminance channel.  To do the RGB justice, I would have needed to likely triple the total integration time of the three channels with that of the L.  This is simple mathematics and comparison of the band passes of the filters.  In actuality I about matched the total RGB integration time to that of L, following my usual recipe for LRGB imaging.

Thank you for your attention to what turned out to be a much longer post than I intended, but I appreciate the format on this forum for presenting and discussing these topics.

If you are still with me: as always, your comments, critiques and suggestions are most welcome.  Please feel free to counter my points and positions as I look forward to the discussion.

Please be sure to take a look at the images on AstroBin as well as the lengthier Description there. 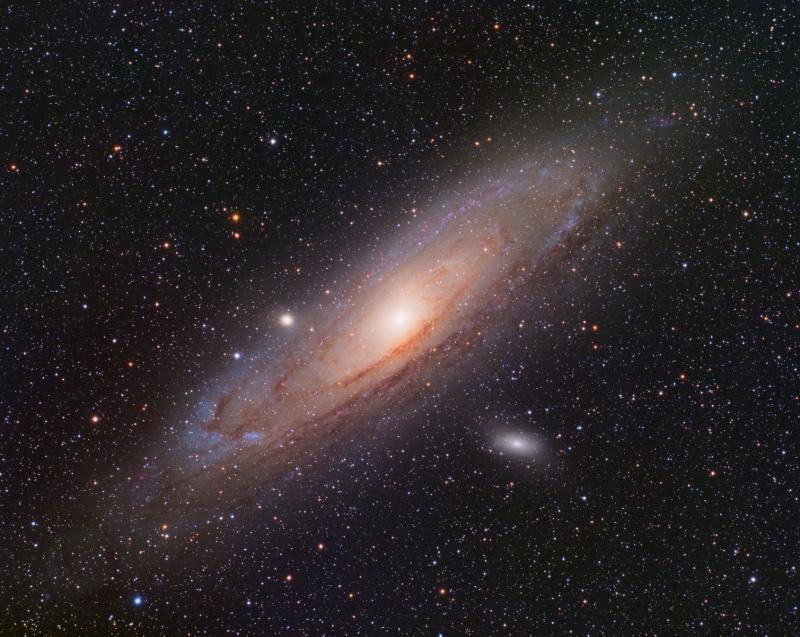 I like it so much! The image is very well balanced and I completely agree with your 3rd point. As you said, is a matter of taste so in my personal opinion your core is what I would expect for it, almost blowed without being really.

Thank you very much!

I like it so much! The image is very well balanced and I completely agree with your 3rd point. As you said, is a matter of taste so in my personal opinion your core is what I would expect for it, almost blowed without being really.

This has been a challenge for me with several targets, especially M31.  I have arrived at using HDRMultiscaleTransform in PI to re-level the brightest sections of the image, but I then like to blend the before and after images to come up with a more pleasing balance.  Often I find that HDRMT on its own produces too harsh of transitions, and rather than to fight it and try masks, this blending has usually turned out to be better in the end.


Also tagged with one or more of these keywords: astrophotography, ccd, dso, imaging, refractor