M15 is a globular cluster in the constellation of Pegasus composed of more than 100,000 stars. It is 175 light years in diameter,  35,000 ly distant from Earth, and approximately 12 billion years old. Due to a central black hole, M15 has undergone contraction, or "core collapse", resulting in a highly dense interior. Extensively studied, the cluster has been found to have numerous variable stars, pulsars, a doule neuron star, and a planetary nebula - the first of only four so far discovered within globular clusters. 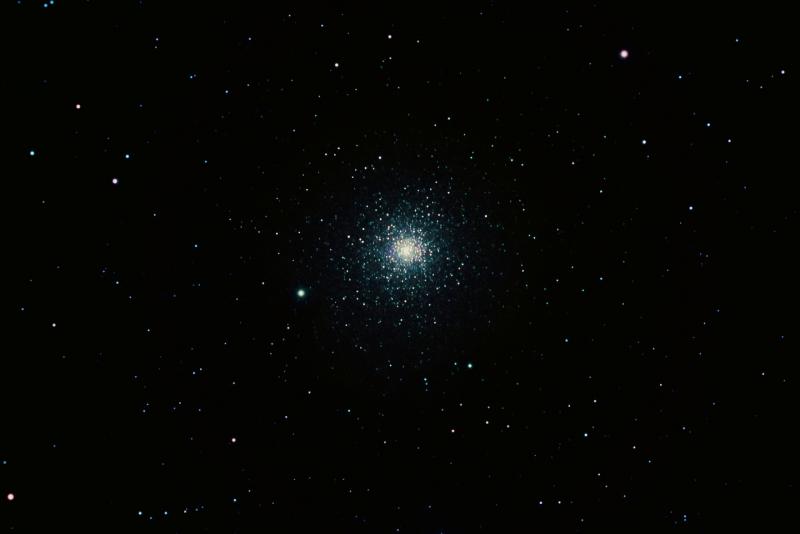 Nice shot, it looks like you captured the little planetary nebula at the 11:00 o'clock position. Its the little green dot just a short distance from the bright core just below a half circle of 4 equally bright stars.

Thank you, Astro-Master. I didn't know about this object. The 15 mag planetary nebula, known as Pease 1, was found by Francis Pease in 1928. It was the first of only four planetary nebulas so far discovered which reside within globular clusters. See the following link for more information and finder charts.

Based on the finder charts, the nebula is marked with a red cross on the attached image. There is an oval, fuzzy object at that location but, at this scale and so close to the core, I would have a problem identifying it as a planetary nebula. Perhaps someone with a much larger telescope and an Oiii filter might take it from here.