Which way to go RASA vs Hyperstar?

i have an older black tube C11 that I can add a Starizona Hyperstar to or I can buy a new 8inch RASA for a few dollars more. The 11 inch RASA is a little pricey.

i have an older black tube C11 that I can add a Starizona Hyperstar to or I can buy a new 8inch RASA for a few dollars more. The 11 inch RASA is a little pricey.

This is pretty simple.

Want to optimize optical performance at low F number (star shapes at edges are a major attribute), RASA, hands down.

Want to maintain the possibility of longer focal lengths (F6.3, F10), at the cost of some optical performance at low F numbers.  Hyperstar.

The difference in optical performance is significant, but many people use Hyperstar, happily.

I went RASA.  C8.  You're unlikely to do this with Hyperstar.

Note that it required replacing the Celestron camera adapter and spacers with a solid PreciseParts camera adapter that required no spacers.  A tiny amount of tilt causes problems at F2, no matter how good the scope and collimation are.

I'm in the exact same predicament as you. I'm using a CPC 800, which is fork mounted, and am debating if I should get the HyperStar for a nonEdgeHD scope and use this for a bit longer, or make the upgrade now to new mount and a RASA (still debating RASA or EdgeHD + HS. Even with an EdgeHD tube). I'd be more than happy to buy a HyperStar to have a primary, and secondary objective, but not sure I can do it with an older nonEdgeHD. Limits my upgrade options.

If you're fine without having to look through an eye piece, and focused on imaging, go with the RASA. That 11" looks nice.

I am going to go against the grain here and suggest the hyperstar for C11.  While I think the RASA 11 and 14 are incredible wide field instruments, I find the 8 inch leaves a little to be desired.  Though the 8 inch has a refined focuser for "zero image shift", it also has a MUCH smaller imaging circle than the two larger RASA scopes.  It is absolutely maxed out with an APS-C sized sensor, and (in my opinion) lacks good stars at the edges and corners on this size chip.  The RASA 11 and 14 can both cover a full frame sized sensor with better corner stars than the 8 inch with an APS-C (from what I have seen).  Using the 11 with hyperstar will also give you a "better" imaging scale if you are using the ASI294 in your sig.

I don't have either a RASA or a Hyperstar and am thus not an expert with either but I've looked pretty hard at both as I think they are remarkable devices.  I actually bought a C11 primarily with the idea of eventually using it with a Hyperstar.

The RASA seems to be an incredible instrument with very few compromises for imaging quality - sort of.

The Hyperstar?  Again, awesome tech.  The optical precision doesn't seem to be as good as with the RASAs but it's pretty darned good IMHO.  But I still have the sampling concerns and you again have cabling and a heat-producing camera in front of your optics (again, doesn't seem to be a big bother for most).  The Hyperstar image circle is actually a fairly good match for the IMX294 sensor so I'd expect you to have a bigger FOV than you'd be getting with that camera if paired with a RASA11 or RASA14.

Don't forget, however, that Starizona makes the "Night Owl" for the regular SCTs and will soon (weeks to months) be selling one for the Corrected SCTs.

The Night Owl optics are pretty good and since you are at about F/4 the under-sampling issue isn't so concerning.  The good image circle isn't all that big so with the IMX294 camera you'd probably define a smaller ROI for imaging purposes.  The sensor with a size most matched to the Night Owl optics is the IMX183 and some of us may find ourselves a bit over-sampled with the bigger OTAs but with a low-noise sensor that is not a big deal.

The Night Owl means no cabling or camera to put in front of the optics.  You can quickly and easily change to visual use.  No messing with a camera attached to a corrector plate - which I've heard has resulted in a few broken corrector plates but probably not enough to where I should really worry about that.

Which to get?  I don't know.  It depends on budget, priorities, existing equipment, etc.  But given the comparative prices and your current equipment I'd probably buy the Night Owl, define the smaller ROI for your ASI294 so that you don't have a lot of vignetting and only go RASA8 or Hyperstar if you find you don't like the results from the Night Owl.

And if I went with the RASA8 I'd probably be using an IMX183 camera with it thus sacrificing the FOV for better sampling.

I went with the Rasa 8 for two reasons: the first being the addition of a Hotech collimator made the Hyperstar option more expensive than the Rasa and secondly I wanted a wide field instrument in the 400mm range.  I don't own an 80mm refractor and needed something that could capture wide vistas without resorting to mosaics.

The Rasa 8 is also very light at 16lbs with its aluminum tube, something that may/may not be an issue if you have to travel to a dark site and have to take the scope off the mount often.  Lastly I prefer to keep my scopes in 'one piece', setup and ready to go at a moment's notice:  I don't like to pull adapters off my scopes once they've been setup.  I found the Rasa to be a game changer for me this imaging season and have used it exclusively this year while my other scopes sit idly on the shelf.  The Rasa 11 is getting a focuser upgrade in the coming months to the same design as the Rasa 8 and 14.  I will probably buy the 11 next spring after the upgrade is out.  I seriously considered buying the Rasa 14 this past summer, but the sticking point was having to buy a heavier capacity mount which added greatly to the cost.

Great feedback - thanks to all who responded.

OP: does the old C11 give you a fairly flat field with Hyperstar?  That would be my concern.

I went with the Rasa 8 for two reasons: the first being the addition of a Hotech collimator made the Hyperstar option more expensive than the Rasa and secondly I wanted a wide field instrument in the 400mm range.  I don't own an 80mm refractor and needed something that could capture wide vistas without resorting to mosaics.

Personally - I think "RASA vs Hyperstar" is the wrong comparison - at least for the RASA 8. I think the question is "RASA 8 versus a fast 80mm to 110mm APO flat-field astrographic refractor" - think TV-101, Tak FSQ-106, AP Traveler, etc.

I see the mention of under-sampling as an issue with RASA (with current cameras that is - this may go away with the next-gen cameras) -- but who cares when the goal is to produce "constellation size" images? You're not going to blow them up to see detail in galaxies, or stick your nose 3 inches from your monitor to look for those "flaws" that nobody on FaceBook will care about - or even see. The RASA 8 (and the 11?) is the wrong tool for imaging something like M-51 or dimmer globular clusters and planetary neb's. It's for grabbing big swaths of star clouds, emission nebs, targets like M-44, NGC-7000, or M-31, and maybe the galaxy fields in Coma/Virgo, etc.

There's also the "EdgeHD vs old-design SCT" question -- but with Hyperstar you are only using the primary and corrector plate - the correcting lenses in the baffle of a EdgeHD are not used with Hyperstar -- and with such "wide-field" imaging the cooling advantages of the Edge are not an issue - because this is NOT high-resolution imaging -- it is wide-field imaging - think looking at the Hyades with binoculars under poor seeing vs viewing M-1 with a C-14 from the Florida Keys at 1000x power. That leaves only focusing as a possible advantage of the bigger and heavier Edge SCTs (for Hyperstar use of course).

EdgeHD, plus focal reducer system of some sort, plus Hyperstar - is a very versatile system. However, it is still is not a "does everything best" solution. For each focal length there is always a better "one trick pony" that will perform better, but only at that one focal length. If you want "versatile, while accepting a little lower performance" -- go Hyperstar/SCT -- If you want "best performance" for constellation-shots only, go RASA -- or FSQ-106.

The bottom line is, you need to commit to what you want to accomplish, and then get the best system to do it. Is it "one trick only", then RASA.... if it is "do it all at the highest level" - you need still three systems -- and if you can accept some small performance compromise (or have limited funds), than the versatility of the Edge/focal-reducer/Hyperstar, is the way to go.

Again - personally - I was going to go RASA - but with the current sales on Evolution -- I'm going with Celestron's regular 9.25, plus (at a later date) Hyperstar -- while still having my other scopes -- and the Evolution mount for my 60mm solar double-stack for the daytime.

Again - personally - I was going to go RASA - but with the current sales on Evolution -- I'm going with Celestron's regular 9.25, plus (at a later date) Hyperstar -- while still having my other scopes -- and the Evolution mount for my 60mm solar double-stack for the daytime.

Well  -- that WAS my plan -- and I was just about to order the Evolution 9.25 at the sale price -- and then 2 hours ago - a friend sent me an e-mail saying "Wanna buy my C11 EdgeHD rig?" It has been rarely used, and I think the price will be very good (or better than "good")…. and he can bring it to my house Monday. I would just want the tube and assorted parts, not his CGEM mount. Decisions, Decisions.....

That's a problem I wouldn't mind having right now George.

Trying to sell my CPC 800 right now for an 11", preferably before Black Friday.

For imaging purposes, I decided to get a Hyperstar and ASI294MC pro as an upgrade to a “classic” (=old) black tube C8. Mounted on a Losmandy G11G mount, it has been a successful wide field imaging set up for me with minimal fussiness. If I was starting from scratch I might have gone with a RASA but the Hyperstar was more economical since I already had the tube and it was doing nothing (I have a C8 Evolution for visual). I was previously using an 88mm refractor and DSLR which was also fine but I feel I am getting better data with the Hyperstar. Either way it will work, just depends on your needs especially if you have other equipment for visual observing. This is the setup with Hyperstar. 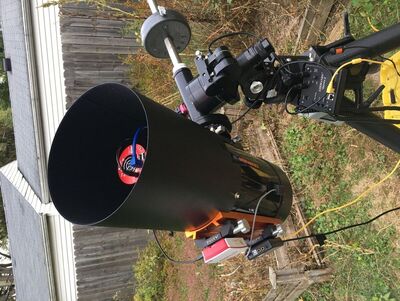