Interested to hear from anyone using the Meade EQ wedge.

I'm not interested in de-forking the OTA, although I may eventually go with a GEM.

1) Are the forks rigid enough so they don't flex? My latitude is approx 41 degrees.

Mounted is a Telrad, 9x50 RACI and 1lb CCD camera. I have counterweights.

I'm not overly concerned with mirror slop as I can compensate for that.

2) Is the wedge and adapter plate rigid enough to stay aligned regardless of OTA position?

3) Any pifalls using the Meade wedge?

Several years ago, I used my LX-90 mounted on the Meade wedge and don't recall that I had any issues with it.  I was, however, using the scope for photometry, not pretty picture photography.  I didn't notice any issues with the forks or with mirror flop (although the later will probably vary from scope to scope).

I do recall, though, that the LX-90 will not mount directly to the Meade wedge since the wedge is actually made for the LX-200.  The difference?  The LX-200 has a three-bolt mounting pattern (which the wedge also has) while the LX-90 has only a single bolt in the center of its base.  Meade sold an adapter plate to take care of this issue (I have one), but I don't know if they are still available.  If you can find one, then I think that you'll be happy with the set-up.

I knew about the adapter plate with just the one mounting hole; that also cased me concern.

I just don't want to make a 200 dollar mistake.

I have a wedge with a adaptor plate that I got about a year ago. Do you have a 8" or bigger? The wedge for the 8" is expensive but for the 10-12" you need a bigger one and that's very expensive. It depends on your needs: I do primary star viewing and for that you cannot beat a Az/Alt mount because viewing is a lot more comfortable and setup is easier and faster than any Ra/Dec mount, this is important for me. The wedge gives me the added option  of AP.  Yes it is best to balance it : I don't have a counterweight kit but I use my dew shield with stick on weights. On the LX90 you should never ad extra equipment...for that you need the LX200. 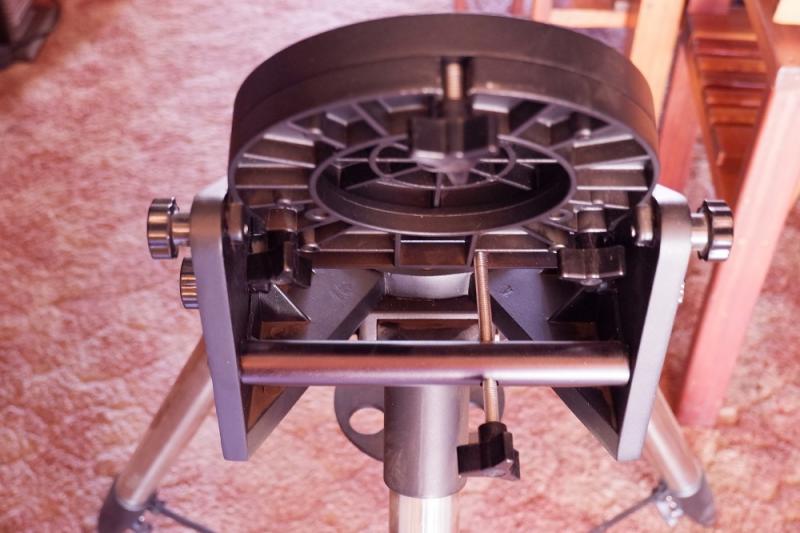 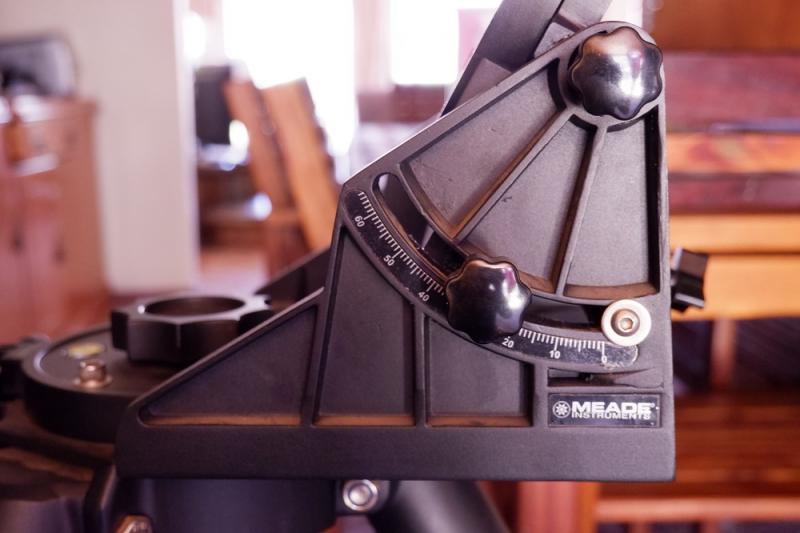 The construction, for me, is sturdy and the adaptor plate attaches well, I don't think 41 degrees will be a problem: 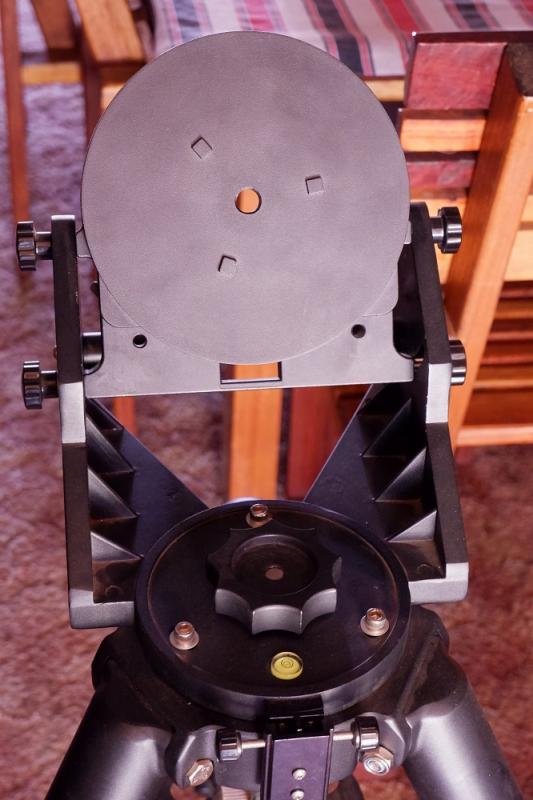 PS the adaptor plate has three studs that fits in the base of the LX90.

I have a Meade X-Wedge listed in the classifieds right now that I actually bought for an LX90. I was doing EAA and wanted to increase my exposure times so I got it on the wedge to eliminate field rotation.

The fork arms were sturdy enough for that application. It took an extra second or two to settle if bumped, and I generally tried to limit its use to nights with wind under 5mph.

I also got a giant field tripod for additional stability after a year of using it on the stock tripod. Maintaining polar alignment was never an issue. And interestingly, I never required an adapter plate. Not sure if that was just a feature of the X-wedge?

In any case, it can be done.

The LX90 is slightly less robust in mechanics than the LX200, but there isn't anything preventing from using it on a wedge for imaging using an adapter.

The main deficiencies with the LX90 are present whether used in Alt-Az or EQ mode.  Mainly the possibility of the DEC slipping after repeated uses especially with added weight. This can be mitigated with a Peterson clutch kit.

The issue yet to be discussed is the proper wedge to use.  The standard field wedge is OK for the 8" used in a static observatory.  Adjusting it is a bit of a pain in the field and you'll be disappointed with it's performance and be looking at modifications after your first night's usage.

For mobile applications and 10" or larger aperture you need to purchase a better wedge.  The X-Wedge or Milburn wedge are capable of handling the task of any of the models up to the 14" LX200.  They secure to the tripod better, provide smoother Altitude and Azimuth adjustment than the Standard wedge or old Superwedge.

The X-Wedge and Milburn come available on CN classifieds so if you're budget conscious you might snag one for $200-$250 used.

Milburn standard wedges are less expensive than the X-Wedge but are fine for up to 10" aperture, I'd suggest the Deluxe Milburn for the larger apertures. The difference is the wedge plate is 3/4" aluminum on the standard and 1" aluminum on the Deluxe along with a few other extras.

I used a wedge on my lx90. I added a bag of pennies to the inside of one fork leg (under the cover) to balance in RA.

I tried a standard wedge and a super wedge. I found that most of the flex came from the RA axis of the telescope fork base casting, not the wedge.  The scope became larger and heavier as I continued adding things to the mount to try to deal with vibration, although I was using a ST80 guide scope instead of a OAG so the OTA was a bit heavy to begin with.

Yes it will work ok, and it got me started in imaging (the hard way) but eventually I switched to a GEM and found it much more solid and easier to transport.

If an LX90 was my only scope I would not hesitate to use it on a wedge for imaging but it will definitely not be as solid as Alt/az mounting.