Dear observers, a few day ago I observed PanStarrs from city. I was surprised to see the tail without any problems. Yesterday I drove ti my rural observing site. With my 12 inch Dobsonian I observed the comet again. The sky was so lá lá, SQM only 20,7 in that region. There was much to see!

At the first glance I saw the distinct coma with a parabola like shock wave. At 144x, the central condensations was distinct.

The tail was asymmetric, the eastern part was more pronounced. Observing carefully, I saw two knots in the tail.

The comet starts to get interesting. It is well placed in Auriga. It will get an binocular object in February and can be reached with very small instrument until Juny. It will never get a real large comet, bit I think it is worth following.

I tried to find out much gas the comet evolves. Not too much: My Swan band filter gave onyl a moderate contrast increasing. T think there is a lot of dust in the tail.

For the monthly comet corner of our German Sterne und Weltraum journal I calculated how the tail changes in December. It is a fast shift! The image gives the situation for the 1st, 11th, 21th and 31th of December. The black bar is celestial west, the blue bar is the anti solar direction (where the ion tail is expected). My simulation calculates the dust tail only - this are the blue particles.

Thank you Uwe for this nice view and information.

Uwe, thanks for reporting the interesting evolution of this comet and thanks for showing the beautiful image we can see.
Congratulations on the entrance.
A greeting.

Uwe, nice sketch.  I also really like all the information you've provided about the comet.  Where can I subscribe to Sterne und Weltraum?  I would love to use it to practice my German.

I think you want to choose between  "Jahresabo Print" (printed magazines) and "Jahresabo digital" (pdf only).

Very fine sketching and a nice amount of information about this comet.

Thanks for posting the sketch and information. This comet will be 10 degrees above my horizon on 10th July, and then climbing higher each evening. I'm happy that I can follow your posts in the meantime as I await its appearance down here.

Thank you for sharing,

Very many thanks for your sketch of CometC/2017 T2. Your image and your description of it has encouraged me to check it out for myself.

I got a chance to see C/2017 T2 this morning between 2 and 3 am local time.  It was located in Auriga between Capella and "the Kids".  The comet was about 1 degree NE of epsilon Aur, the northernmost star of the three Kids.

I was surprised how very small it is--just barely there through my widefield 55mm ep @ 71x.  I looked at various magnifications up to 326x and could never clearly see much of a tail.  The comet appeared moderately condensed with a short diffuse tail to the SW.  At higher magnifications a stellar pseudonucleus would wink in and out of view with the seeing.  Over the course of an hour its movement to the NW was apparent.

I did the sketch in the house this morning based on my field notes (the temp last night was 32*F/0*C) using 2B and HB pencils on Bristol board.  I flipped it digitally to give the correct image view and inverted it digitally for the eyepiece view.

This comet will be a good one to follow. 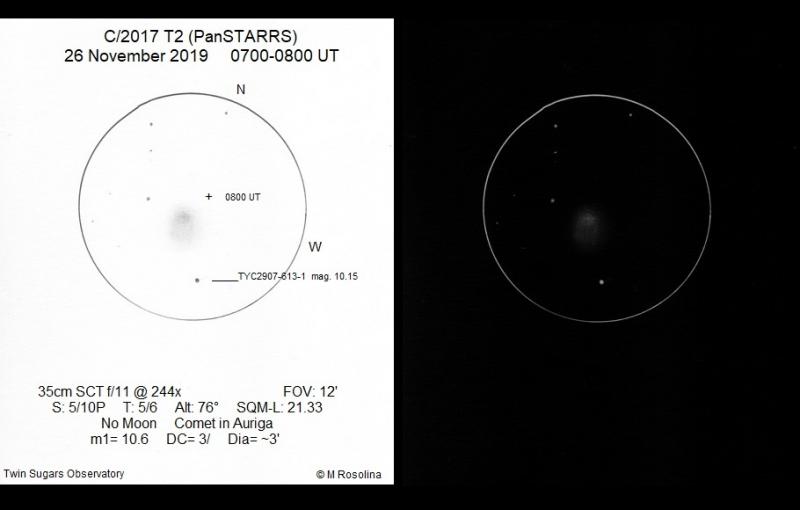 Very nice sketch....I note from your observational notes that you've access to pretty good dark site....That must help enormously. As you said this comet will be good to follow over the coming weeks!

Clear skies, and thank you for sharing your observations with us,

Yes, I have dark skies which are a big help for viewing comets and faint fuzzies when the transparency is decent.  I almost never look at comets when the Moon is up, preferring to wait for dark skies.

Thanks for the likes! 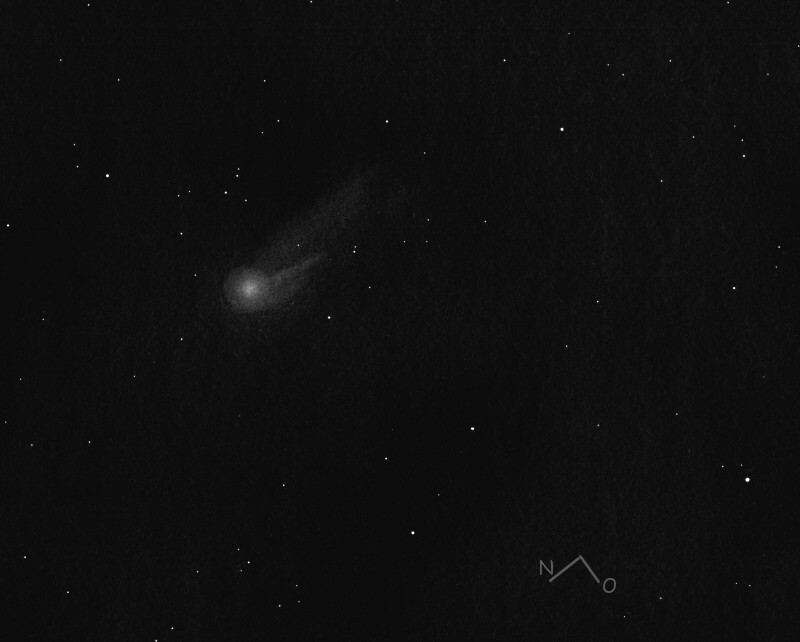 Love this sketch Christian...at what time did you observe the comet?

I think you want to choose between  "Jahresabo Print" (printed magazines) and "Jahresabo digital" (pdf only).