21 replies to this topic

This was my second dark site session with my new telescope.

A week before, I had to cut the session short as humidity became unbearable - spider and shroud started dripping.
I want to share my impressions of this device now that I had a full session.

Logistics first.
This is not a small scope so I got a folding aluminum ramps for loading it. This way, I can load the scope alone and it is faster than loading my SW 12" collapsible.
just need to make sure that mirror box is tilted a bit so the bearing will not hit the car ceiling. 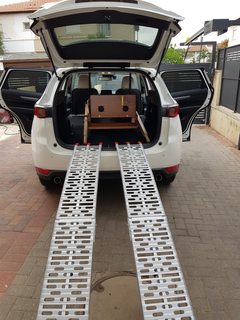 Truss and shroud are light and have plenty of room.
For a 20" monster, the process of loading is easy enough.
If not totally lazy or must, the scope can be loaded/unloaded without ramps.

The road to the dark site is about 2.5 hours drive. I have been making this trip every month for over a year now and love the drive. 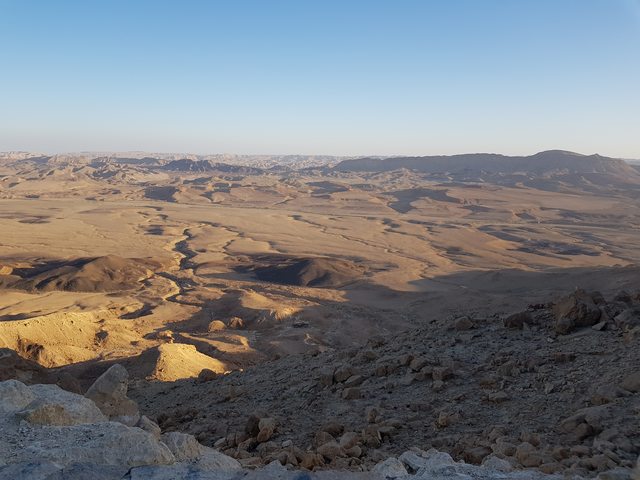 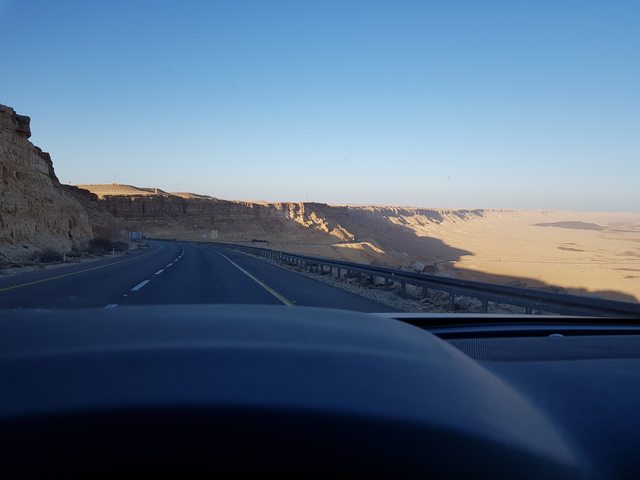 I was the first on site, about an hour before dark.
Unloading was simple enough and once everything was out of the car, I went to assemble the scope For collimation I use the Farpoint 2" collimation kit - laser and cheshire.
Even after 2.5 hour drive, last part of it is off-road, collimation did not drifted by much.

The entire process of assembly + collimation takes about ~20 minutes.
With camp set - tent, table chairs, I still had time to dress for the cold before total darkness.

I was lucky to see the gathering of Venus, Moon and Jupiter with Saturn watching from above.

That was an amazing sight! 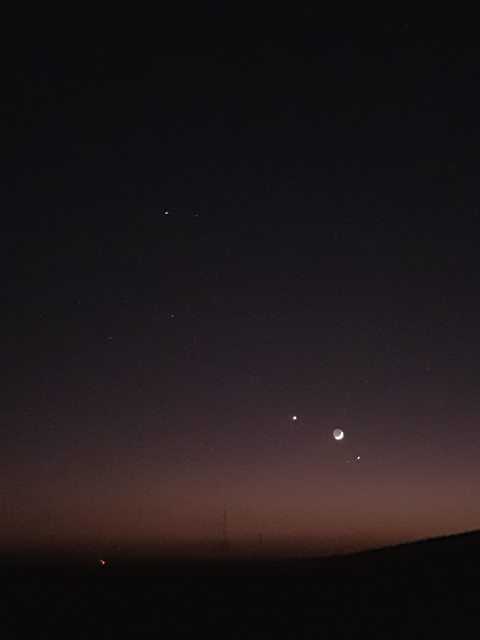 First I revisit the Vail nebula.
Eyepiece - Nagler 31mm filtered with O-III
Started with the Western part of the nebula from the tip through Cy52 to its bottom part. The amount of details was insane.
The Eestern part as equally stunning.

The central part of the nebula was nicely visible.

Tonight's plan was to go through objects in Cassiopeia, Perseus, Andromeda, Orion and Ursa Major.

Double cluster fits nicely into the FOV of the Nagler 31mm. Very sharp image.
Raising magnification a bit, still could see both clusters within view.
Next came the Owl cluster, M103, NGC 663 and more.
Pacman nebula was also nicely visible, I will have to revisit this object to figure out more details.

I did a quick detour to view M15. This cluster is magnificent! raised magnification to 135 and the cluster could be resolved nicely.
With magnification of over x200 which is reserved for such objects, I could easily distinguish stars almost to the core.

Andromeda Galaxy showed two dust lanes, one very distinct and the other is fainter. I never saw so many details in the arms before.
Both companions - M110 and M32 also fit the FOV.

In Orion, I saw the bubble nebula for the first time.
M42 is majestic as ever, all the details are just fantastic, the nebula is closing full circle, wings full of details. With filters, different details emerge.

The 20" collects so much light that even a cellphone camera could yield details (I had to try...) 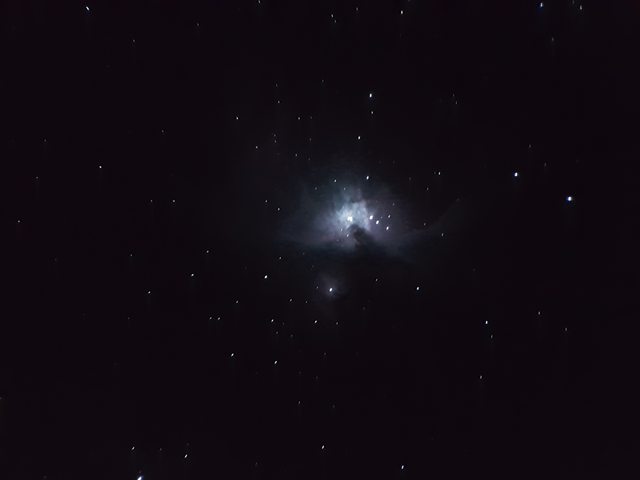 Horsehead nebula was not visible when it was 30-40 degrees but when reaching over 50 degrees altitude, provided a lots of details.
The nebulusity from Alnitak towards HD 37806 was visible with the horse interrupting it like a finger obscuring the view.

Last area covered was Ursa Major - galaxy hunting.
Finding galaxies with this huge field of view is fun and easy.

This session yielded many objects, over 50 were documented, many were not viewed enough and will be revisited to get more details.

My impressions so far:

I am very happy with my new telescope.
The difference in view from my 12" is everything I expected and more, some objects are actually visible and others show so much more details.

Views are wide, crisp and sharp, especially when conditions allows.
Transportability and the ability to handle it by myself is exactly why I opted for NMT in the first place.
Mechanically this is a wonderfully constructed device. Movement is smooth in both axis but firm enough not to shift when switching eyepieces.
Balance is the same without eyepiece or with Paracorr-2 + Nagler 31mm. I guess Binoviewer will require some counterweight - Ryan provided rails for counterweight, just in case.
Collimation lasts in full movement range and during the session - I did not check, but felt no view degradation - will test it on the next session.

Scope Basking in the morning sun after a long night Wow!  I don’t know if I’m more jealous of the scope or observing site.  Congrats on your new scope.

I agree with Steve D.: both your scope and observing site are wonderful. I have two questions:

I agree with Steve D.: both your scope and observing site are wonderful. I have two questions:

Yes, it's in the Negev desert.

This specific site is located about 1/2 south of Mizpe Ramon. Its dark but there is some pollution to the north and east (nothing bad though)

We have another site, west of the Ramon crater which is darker and much higher but suffer from humidity most of the time. Been there the week, by 22:30 all was soak wet and we had to cut the session

Regarding the ramp, I have the Israeli vendor link, don't know if it helps but here:

Wow!  I don’t know if I’m more jealous of the scope or observing site.  Congrats on your new scope.

You captured color in the Orion Nebula with a cellphone shot! Wow!

Gorgeous site and gorgeous scope! Thanks for the report. Sounds like the beginning of a great adventure.

You captured color in the Orion Nebula with a cellphone shot! Wow!

I am so envious! You are my new Super Hero.

Wonderful! Your NMT scope is beautiful, functional and optimized for convenient use. My NMT is F/3.75 and my favorite eyepieces are Nagler 31 and the various Ethos. The 31 overfills my eye, but when I want very low power, that is still perfectly fine, sharp and bright; with the ParaCorr, that gives me 127x, 188x, 232x, and 303x. For high mag I will be using TeleVue's newest 11mm at 358x... Looking forward to that, should be magnificent on planetary nebulae!

What I like about your set-up ... nice and simple. It's all about comfortable observing with plenty of quality aperture.    Tom

Lots of ramps for ATVs Pierre, here's one.

I had the privilege to spend few hours with Ilan at this observing session.

At first glance it looks a beast, it's just so massive. Then when moving it around it feels very smooth, bearings are just superb.

As for observing, it feels like a dobsonian on steroids.. Nebulae are bright and full of details, the Veil just popped out of the background. stars were so abundant and so bright, that at some point Ilan tried to show me an open cluster, and I'm like "where is it?!" - there were so many stars in the FOV, that everything just looked like a huge cluster..

It sure was an amazing night

A very nice scope in a great location

It is no secret that getting to a location like that is the key to this hobby.

A very nice scope in a great location

It is no secret that getting to a location like that is the key to this hobby.

Indeed. We have a nice astronomy club here, many do the trip, 3-4 hours drive, every new moon and enjoy wonderful skies and good company

Looks like you have a wonderful telescope -- and a great observing location.

I don't own an NMT Dob -- but some of my best friends do!

-- including Ryan of course - who I have observed next to a number of times, using his personal 20-inch with Fullum primary. It is a very impressive telescope.

At some point - I'll have to sell my Obsession 20 F/5 to a younger fellow who can 'live' with the size, weight, and ladder..... and I'll almost certainly move on to a short NMT.

As for Fullum.... lucy dog.... I was sitting right next to him at Stellafane's main presentation back in August when they walked around selling final raffle tickets. We both bought some. He won, and I didn't!

Beautiful scope and I get to that area as often as I can, it is great!

Wonderful and beautiful, and to view where you view must be awe inspiring!

I have Ryan on a special out of the box project, look forward to some fun use.

Wonderful and beautiful, and to view where you view must be awe inspiring!

I have Ryan on a special out of the box project, look forward to some fun use.

Now you made me curious.

I should receive another of Ryan's work soon - an observation chair to match this scope.

I believe you have the perfect telescope and it's beautiful.  Big glass and no ladder!

Now you made me curious.

I should receive another of Ryan's work soon - an observation chair to match this scope.

I've got one of Ryan's chairs. I think it was designed for a much bigger scope than my 12.5".

I can sit pretty high in that thing. It's very stable though.

I've got one of Ryan's chairs. I think it was designed for a much bigger scope than my 12.5".

I can sit pretty high in that thing. It's very stable though.

Mine should arrive in two days.

Yes, its big enough for the 20" can't wait to recieve it.

Shame the weather will be cloudy and rainy for the next week or so.


Also tagged with one or more of these keywords: collimation, equipment, reflector, observing report, observing, dob