Hello everyone! Sorry to make two of these between here and the old ATM thread, but I just picked up one of these and hoped to ask a few questions. My wife is really mad at me for buying this, so I'd like to show her how much use I'll get out of it before she starts asking me to sell it.

I thought mine was a kit as it has been painted white, but the focuser still reads 'Orion', so perhaps it was just repainted (and quite well at that). Seems to be a great scope, but I'd like to get a few things sorted. Unfortunately the spacers between the lens elements have migrated a bit, so I'll need replace those and clean the lens while I'm at it. Not a big deal, but I need to do it. It's missing the nylon-tipped lock screw for the focuser, but again this is pretty minor.

My biggest issue is in trying to use 2" eyepieces. It came with a very nice 1.25" thread-on adapter and dielectric diagonal, but the 2" eyepiece holder it came with is cheap plastic (screws and all), and its threads are stripped. I'd like to get a new one of these in aluminum, but I can't find one I'm sure will fit. I think the male threads on the end are M54-0.75, but I can't find a 2" eyepiece holder that fits this size apart from a WO Rotolock or Baader Click-Lock. Both are a bit spendy for what I'm planning - I really just want an aluminum version of what I've already got. Any ideas or other sage wisdom? Thank you all! 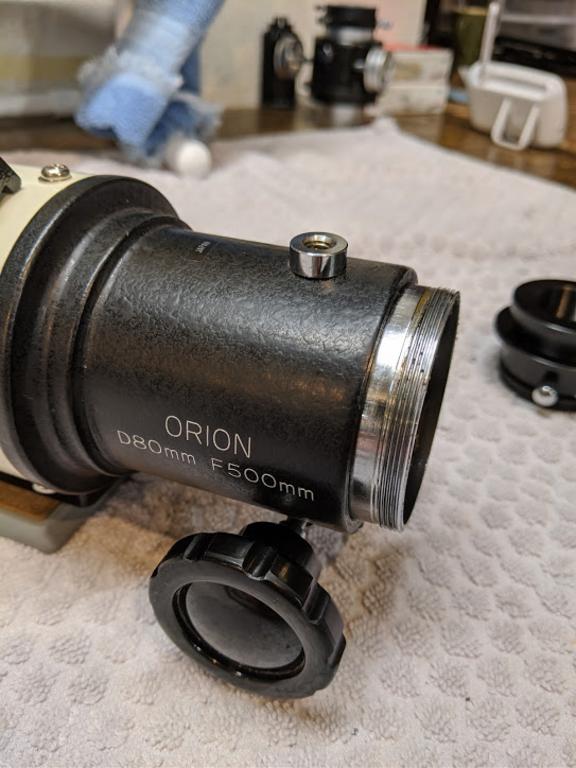 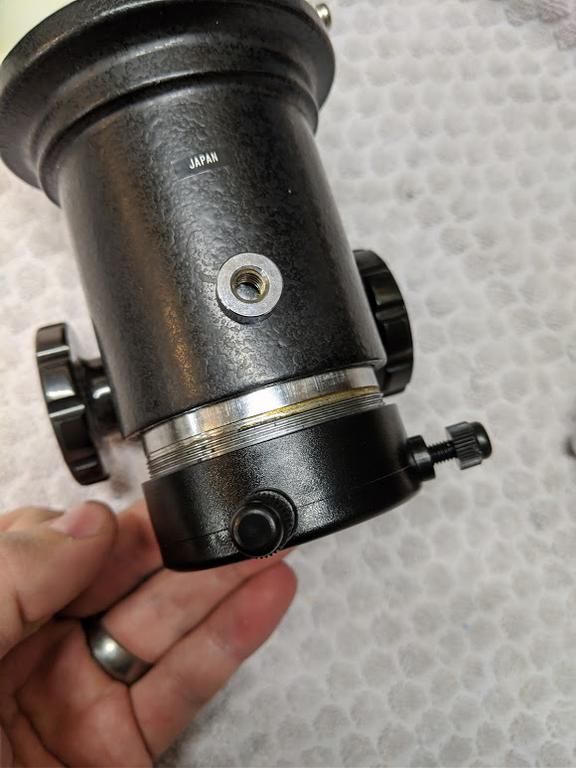 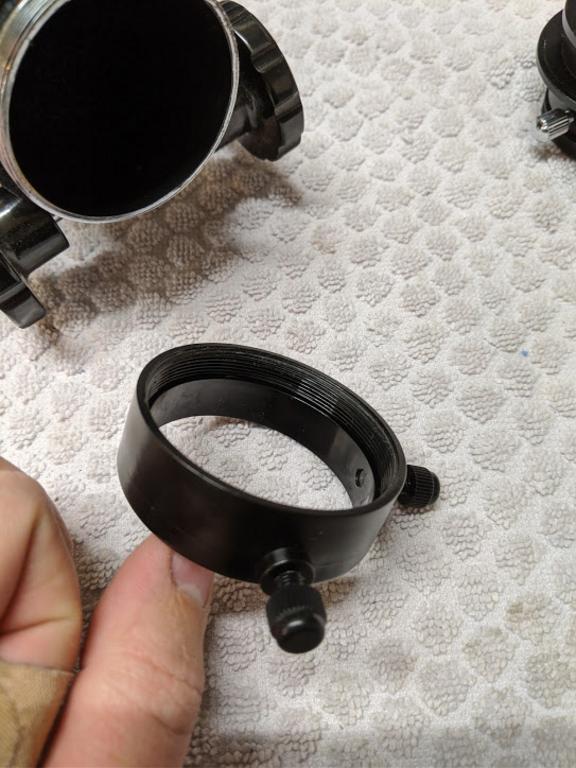 Not answering your question but I think University Optics sold that same one unpainted as a kit. I believe your scope is Japan made & maybe the glass is ED?

I believe your scope is Japan made & maybe the glass is ED?

It is the original Orion Short Tube 80.

Back then all of the Orion labeled telescopes were high quality Japanese made.

The original color is black gloss.

Sorry I cant help with the thread size question.

Thank you for the information gentlemen, I really appreciate it!

About 20 something years ago Lowell Observatory had one of those scopes set up in their display center focused at a picture of Mars on a distant wall.

The display was to inform people about seeing. There was a button on the display that was connected to a hidden hair dryer, when the button was pressed warm air would shoot passed the objective lens and the image of mars through the eyepiece would scintillate to show the public what bad seeing would look like.

My wife is really mad at me for buying this, so I'd like to show her how much use I'll get out of it before she starts asking me to sell it.

I didn't create the above meme, but I'd like to thank the person who did, as it gave me the biggest laugh I've had in a long time...

I'm going to bring this up again as I've collected some more info and want to pass it along. I know the Orion Ultrascan 80 and the UO kit share the same parts, with the only real difference being some Orion branding (and how they're painted/assembled). This thread indicates that the same focuser was also used on the original Orion ST80 (not the current one), and that a 2" adapter was sold separately which also fit the UO Vega-2. The same thread eventually notes that some earlier Meade focusers (DS-16 series) used at least the same drawtube and that their 2" adapter would also fit the Orion/UO focuser. The user Rolo provided a Meade adapter with inner threads approximately 2.125" in diameter to the creator of that thread and it was a match for his original ST80. There is also this thread where the adapter is discussed and a photo of a Meade catalog shows the adapter in question.

It seems that adapter is a bit of an oddball (and has been called hard to find), but can probably still be found with enough searching. I would love to purchase one if somebody has one lying around! For now, I've managed to make the Synta adapter from ScopeStuff work, though it isn't a perfect fit and required several rounds of teflon tape and a 3D printed spacer to fit "correctly".

I know I'm just summarizing things from other threads, but I did want to update this thread if anyone else runs into the same issue. M54 does not appear to be the appropriate size, but UO or Meade adapters approximately 2.125-2.130" in diameter should fit, if you can find them. If I figure out the exact size and thread pitch, I'll update this again in case anyone wants to have one machined.

Another bit I found interesting was that this focuser is identical to some Unitron scopes from the same time (minus the Orion/Unitron branding), including the finer details like the knobs and finish as well as the 5 point mounting pattern. Mine is missing the locking screw on top so I'm trying to design one for 3D printing that will be close enough. While looking for pictures of the knob as a reference, I ran across this from the Unitron History Project. This is a fully Unitron-branded version of what looks exactly like the Orion Ultrascan 80 and UO kit - down to the finder mount and molded shape of the dew shield, as well as the much-disputed (and I think, disproven) claim that it had 'semi-ED' glass. It was purchased through Kasai by an astronomer in Norway in early 1993. I have no idea if that's news to anyone but it was to me!