My new AT72EDii is on back order (just a week or two) and I'm trying to assemble all the pieces so everything comes in at once. I'm thinking WO 50mm Uniguide or the regular WO 50mm guide scope and a set of rings and some sort of Vixen saddle/clamp mounted to the top of the main rings. Hence question 2 above.

I see a lot of views to this topic but so far no responses. I hope that means everyone was out late viewing through clear skies through their scopes!

I've done some more dreaming and calculating. I tried to take measurements off pics.

Here are some options (with pictures) I'm looking for opinions/comments.

Guide scope into these rings. I know it (the non Uniguide WO 50mm) fits. I'm worried about the non-adjust-ability of this option though. Will I have problems aligning the guider with the main tube? 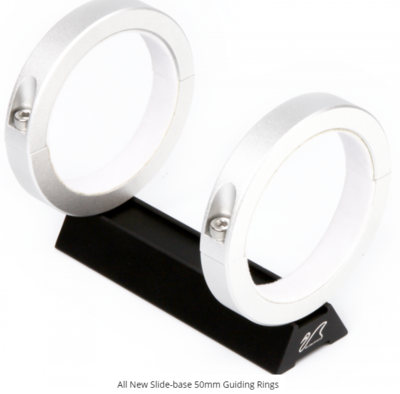 I measured (from screenshots) the two mounting holes and think they are 50mm apart. If anyone has one of these and can confirm I'd appreciate it. 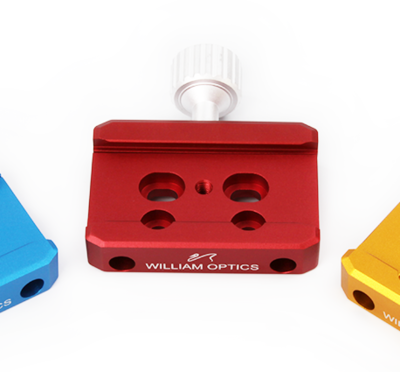 Mount the saddle plate to the top of the rings in those two threaded holes. Are they standard thread for mounting screws? I also measured (these from scope screenshots) at approx. 50 mm apart. Can anyone confirm? 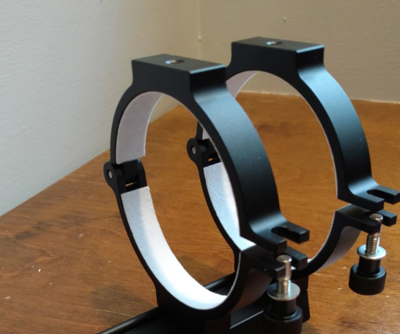 The threading for the holes at the top of the rings is M6.  I just ordered a couple finder bases from ScopeStuff to fit these holes.  (I have a second telescope with M6 threading.)

I'm going to put a laser finder on the ring.  No guide scope for me, since I don't do AP.

I put a larger dovetail and riser blocks under the scope rings then mounted the original dovetail on the top, and used standard dovetail-mount rings for the guidescope (in my case an old Pentax screw-mount 200mm lens). Actually just one ring for now - the bracket holding the camera is a binocular tripod adapter.

If I were using a regular guidescope an easier solution would have been to just buy a pair of rings with flat base and mount them directly on top of the AT72EDII's rings:

Note that the main reason the rings are so close together on the AT72EDII is so the dust cap can slide all the way back - you can add a couple of inches of separation if you don't mind not being able to slide the dust cap back so far.

When it's mounted on a dovetail plate like that, why would  you need to slide the dew shield back? I'd rather move the rings farther apart.

Honestly, I had been doing it to be able to put the scope back into the foam it was shipped with, ie the Official Scope Case. Now that you force me to think it through, however, the scope won't fit without taking off the risers and dovetails as well, so the "case" is going to need surgery anyways. Good point.

I'm having a similar problem with the AT115 - I'm mostly using it on an alt-az mount which requires rotating the scope 90 degrees in the rings, which means it doesn't fit properly in the case any more. I guess I could rotate the scope each time it goes in and out of the case but that seems like it might bring its own problems. Might end up having to do surgery on that case as well, and if I do that I might change dovetails at the same time.

When it's mounted on a dovetail plate like that, why would  you need to slide the dew shield back? I'd rather move the rings farther apart.

OK, you shamed me into action

As a bonus I was able to shift the balance point forward just a bit. Scope position didn't change but the front ring, riser, camera/lens and Vixen rail all moved forward.

This is my final configuration. I 3d printed a riser (black PLA). I don't recall the final dimension but I sized it just enough so the focus lock screw is clear. This allowed me to move the aftermarket dovetail back quite a bit. If you look close, there is another 3d printed block (black PLA) on the top connecting the scope rings. I then bolted/screwed the guide scope clamp right in between. You might have to select the 1600x778 size to see the printed parts/adapters. I would have solid mounted the guide scope but I wanted to be able to occasionally move the guide scope/camera to my NexStar 6SE.

Very nice. That's what my rig would look like if I knew how to 3D print