NGC 2174 is a large ionized hydrogen (Hii) region in Orion which absorbs ultraviolet light from internal stars, and re-emits the energy in the wavelengths of the Balmer series. The nebula is approximately 45 arcmin in angular size, and 6.8 in integrated apparent magnitude. It lies at the distance of 6,400 LY from Earth, and is calculated to be approximately 84 LY in diameter. It contains a number of internal features indicated on the annotated image, including stellar nursery SH 2-252B and open star cluster NGC 2175. A small emission nebula, LBN 189.02+00.91, composed of ionized hydrogen and interstellar matter (ISM), is located about 1 degree to the north.

The attached image was taken on 1 Dec 2019 with a remote controlled Takahashi FSQ-ED 106 x 530 mm on a Paramount GEM mount. The image is a 30% crop of a stack of 9 x 600 sec exposures in Ha light processed with DSS, XnView, and StarTools.

Thank you for looking. Comments welcome. 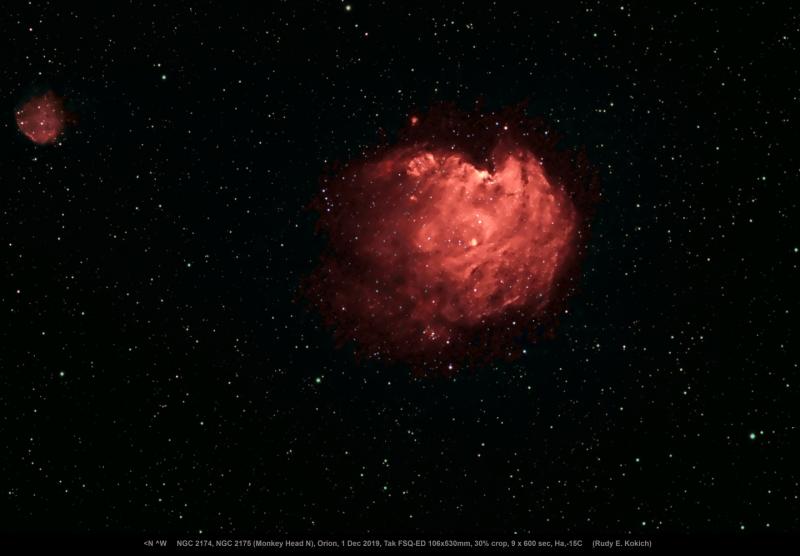 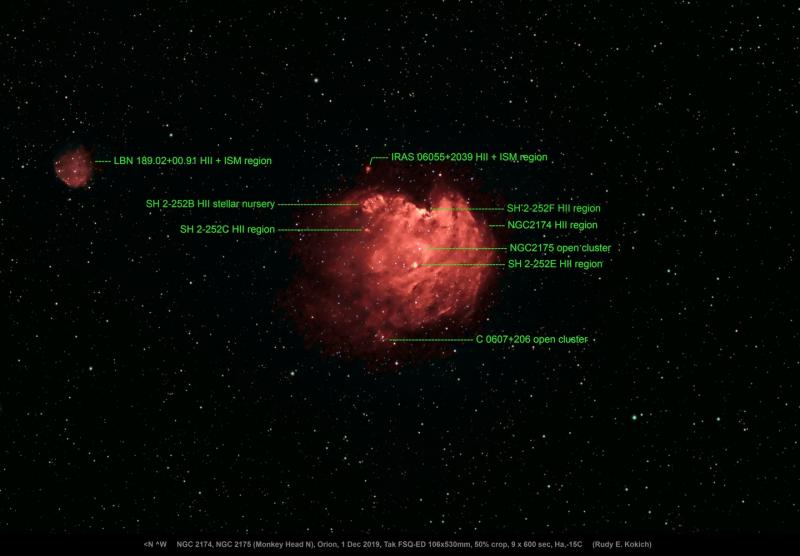 It looks like some very nice data. When processing it, you clipped the blacks quite hard. As a result the image looks somewhat unnatural, and you've lost detail that I'm sure you captured. Don't be afraid of showing some noise.

All light features were carefully protected under a mask to avoid any loss of detail. The mask was then reversed, and the background sky noise layer subtracted from itself by 70%. I like a nearly black sky because the real sky is nearly black and noiseless. The image as a whole may look clipped on the histogram, but the histogram of light features under the mask shows no clipping. This process can not be used when faint nebulosity extends throughout the image.


Also tagged with one or more of these keywords: astrophotography, ccd, CMOS, dso, imaging, refractor