so I had room for one more scope 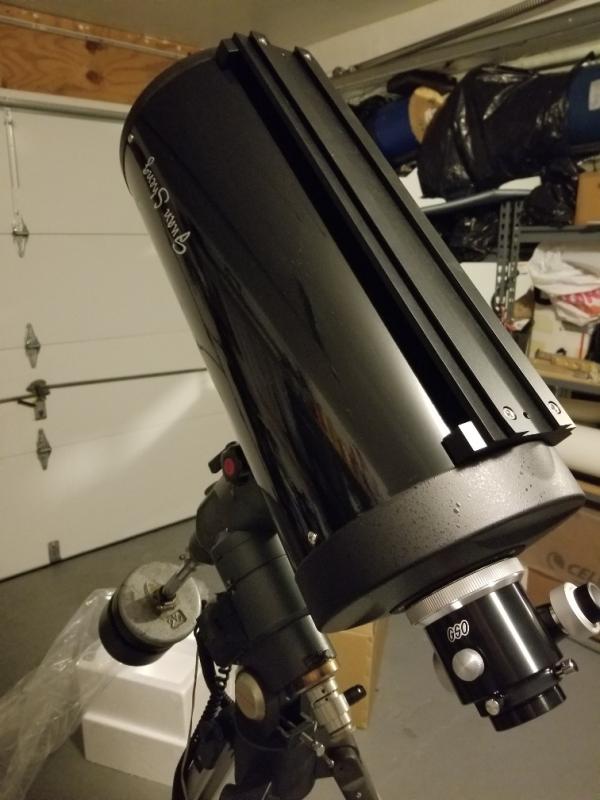 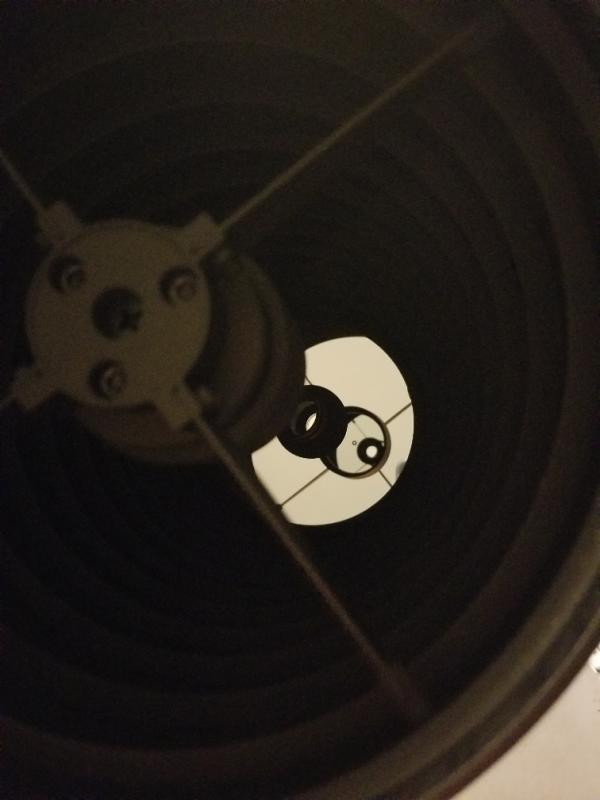 scope itself came  - no issues with body or mirrors

so I did star test

it was awfully aligned

center disk was way off

I got it centered

and WOW star image was quite good

so first lesson about this design 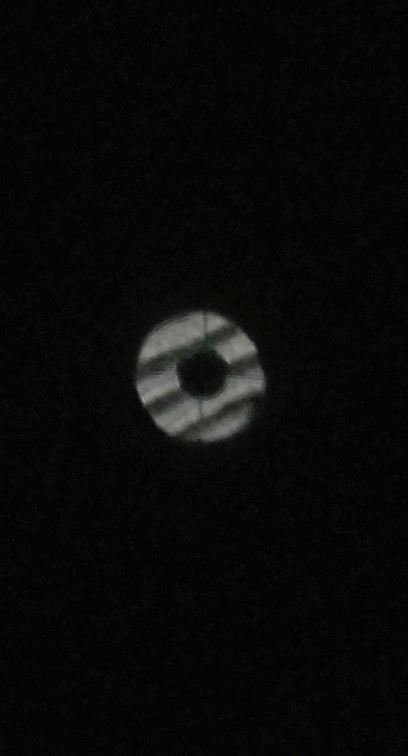 so of course moon dominated sky

so I did a few runs with that

for most apps including visual and most small cameras (not DSLR's)

a 3 inch extension is needed 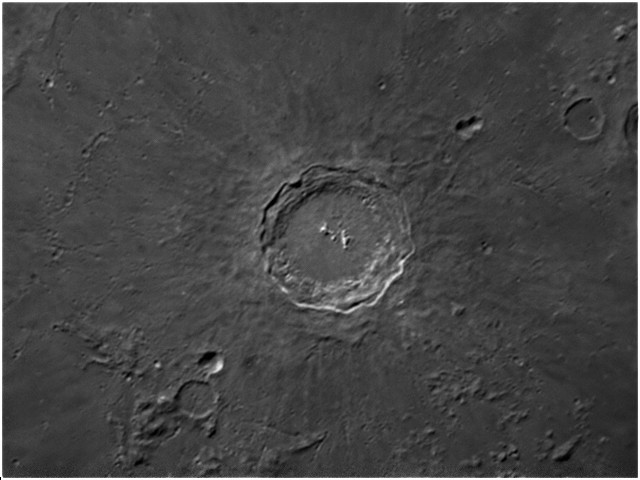 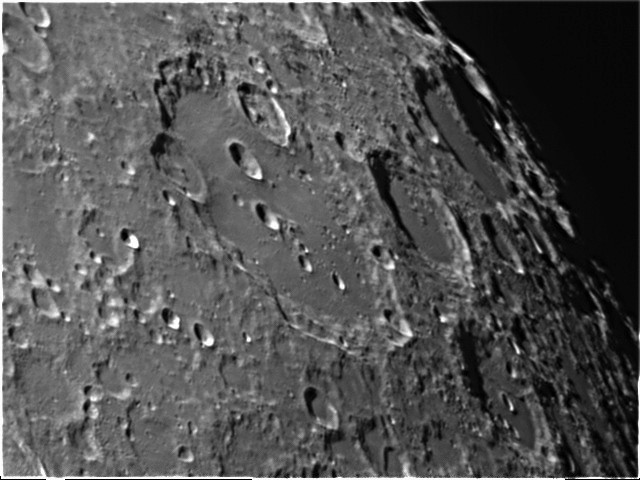 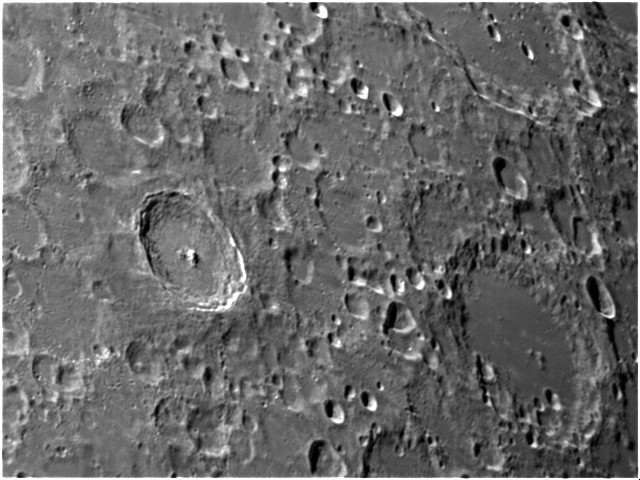 although alpine valley was not in optimal position

I was still able to pick up some of the rille 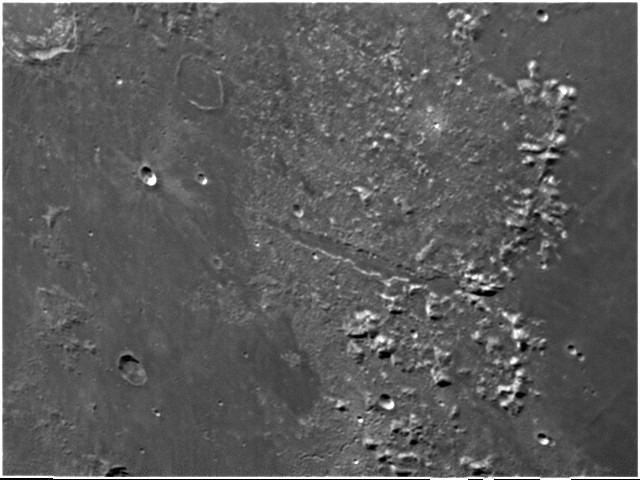 so im generally pleased with scope

one thing it has an excellent cool down rate

it rather light weight

im just hoping it holds its collmination over time

Thanks for the nice review.  Would using the 3” extension for visual use increase the focal length quite a bit?  Agena says it collimates each of these scopes before shipping but I guess yours got misaligned during shipping.

the mirrors are fixrd no increase

you focus at the focuser at end like refractor

its just they allowed you to bite derp

into light cone so it adapts to many

yea i got certificate from agena

but to be fair

it probably got knocked around

even though box was clean

its a pain because it takes a while to adjust

but at least nothing was broken or bent

its critical you get a good round collapsing circle for

star or else image degrades

Is this the first report of one from Agena that is not spot on?  If  so then it's bad luck.  If not then it's something to take into account?

By this I mean it might change one's mind as to where one purchases the scope.

Glad you got a new scope.  You are right, classical Cassegrains punish observers who don't keep them collimated.  I would think your scope will hold collimation well, though.  It's a pretty light weight scope, so not a lot of mass shifting around to throw it out of collimation.  And I'm sure you'll be more gentle than the package handlers.

I wouldn't worry too much about receiving a scope out of collimation.  My newest scope ("new", hah, it's four years old now) arrived out of collimation.  Sure, it was a bit frustrating, but nothing was damaged and I got it collimated quickly enough, just like you did.  I couldn't withhold a recommendation based on miscollimation.

There are some good threads about collimation in the Cats and Casses forum.

Your lunar photos are pretty impressive.

>>Is this the first report of one from Agena that is not spot on?

Every GSO scope is collimated before it leaves our warehouse. Shipping can be rough on scopes, and occasionally - as in this case - a scope might arrive out of collimation. We have had a handful of such reports but those have been a tiny fraction of the total number of scopes shipped. But with any reflector, a buyer should be able and willing to collimate the scope, especially after a long journey.

I managed to reach focus with my binoviewer using a short light path setup. Baader T2 prism TS binoviewer and direct coupling to the prism. My scope is the same as yours.

as i figured above

took a few more shots after twiddle with alignment 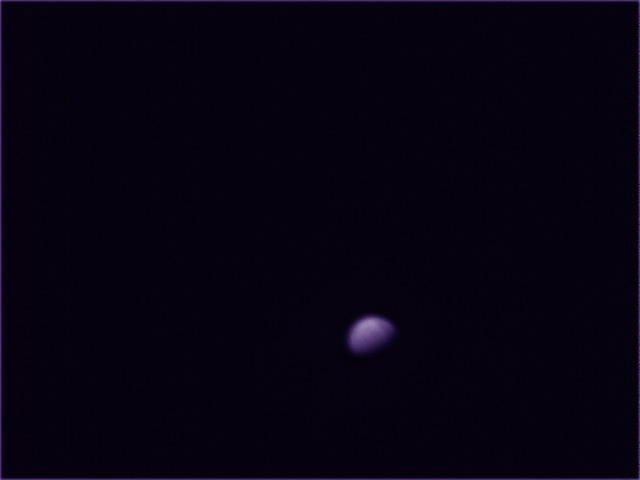 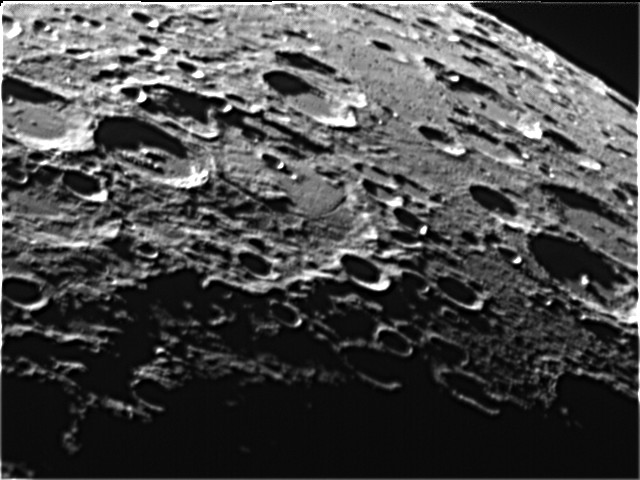 a few from last night 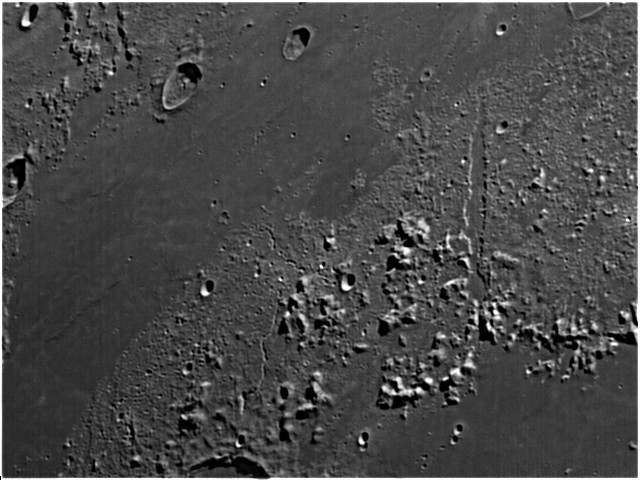 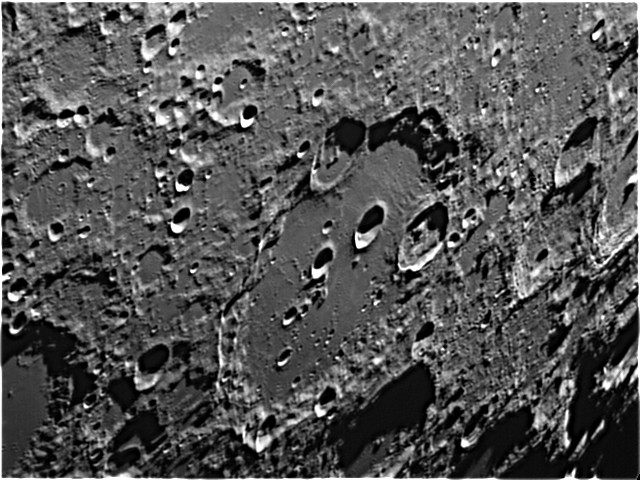 Beautiful lunar pictures! I received mine on Friday and had it out for first-light that night. The collimation was off just a smidge and was easy to fix. I may tweak is a bit yet as I'm hoping to use this scope for high resolution lunar and planetary imaging and observing. It'll be very interesting to see how it compares with my Mak 7. I'm still working through my first set of test images, but so far I am _very_ impressed with the flat, coma-free field. The focus doesn't seem to be overly sensitive to temperature as I only had to make one tiny adjustment of the focus around 4:00am, similar to a Newtonian. 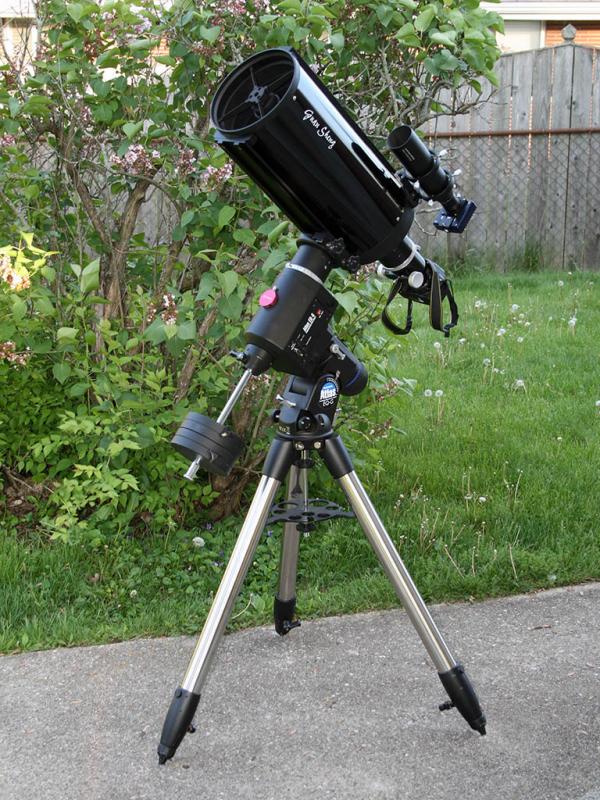 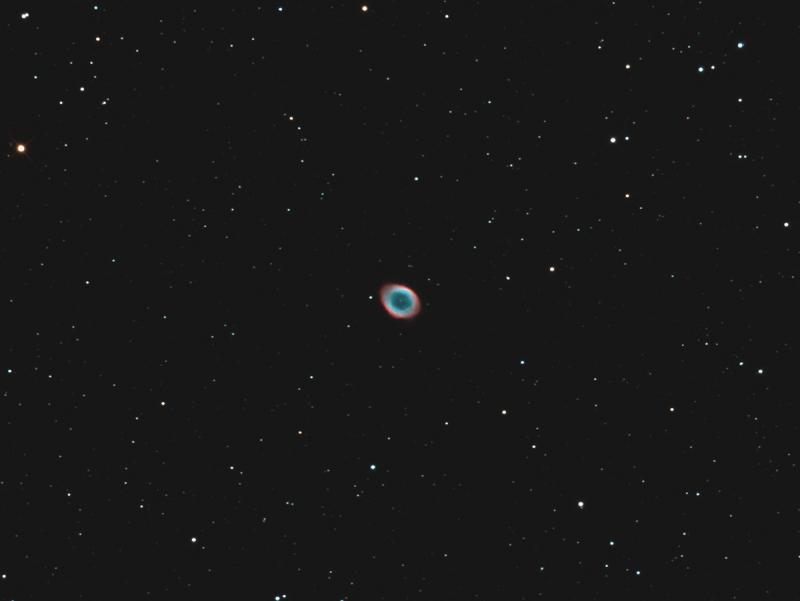 Is it a crop or the coma is zero?

That image was cropped a tad to zoom in on the nebula. Below is an uncropped version showing that there is very little coma across the span of an APS-c sensor... 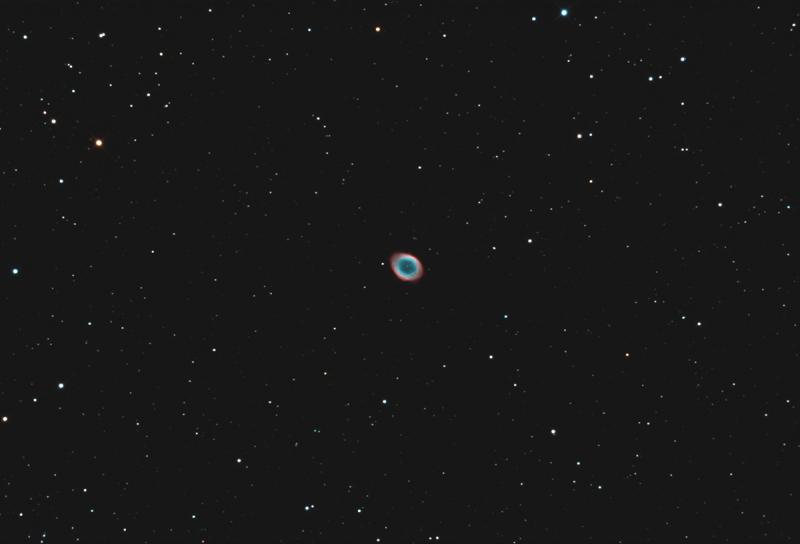 I also have a 4-panel mosaic of the waining gibbous moon that demonstrated that the field is _very_ flat. I could had sneaked it into a 2-panel mosaic if I had know that ahead of time.

Still learning, which is a good thing!

Is it a crop or the coma is zero?

Coma is the same as for a F/12 Newtonian, pretty well nothing for this sensor.  David

Fabulous! Some of my fondest memories are of nights that I spent at the eyepiece of a classic 12.5" f/10 Newtonian. The view of Halley's comet was amazing.

Tonight I'm going to spend some time exploring the visual performance of the 8" f/12 GSO Classical Cassegrain. I've turned it over and mounted it on an LX70 using its Vixen rail; a nice option to have for star-hopping. Although there are benefits to fast scopes for deepsky, I enjoy observing with long f/ratio scopes as they usually give sharp, high contrast views. I'm also curious to see how it performs on double stars. I can't stay out late tonight, but it should be a lot of fun! 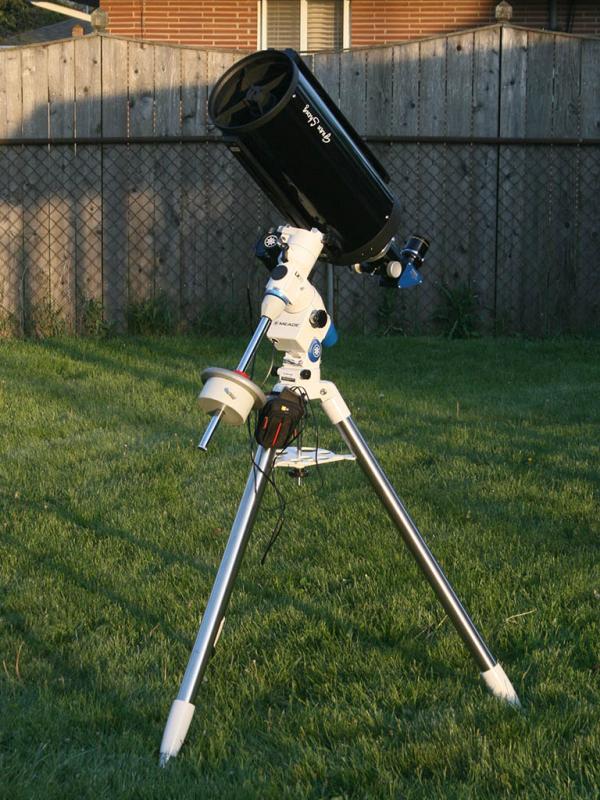 Looks interesting, compared to the Skymax 180 I am considering for my HEQ5 mount.

A small problem: the mount has the thinner rail, how hard is to reverse the mounting rails in order to keep the finder scope at the top?

Are the diffraction spikes noticeable in planetary imaging? I don't like these, I have to admit.

1.  The rails are not the same width, so neither are the mounting holes.  At least not on the GSO/Orion/A-T/other-brands (but same manufacturer) CCs currently out.  Can't just switch them "top-to-bottom".

2.  A classic cassegrain uses a secondary supported by spider vanes, so of course it has diffraction spikes.  But for planetary (non-point) targets, they are much less-to-not noticeable.

The rails are reversible on the GSO, you just need to swap the radius blocks as well. If you want to remove one of the rails to save weight you can do that as well, just buy some short screws to replace the longer ones that hold the radius blocks to the tube.

The refraction spikes are only visible around bright stars. They have no visible effect on the moon, planets, and typical double stars. The visual performance on the moon and planets is excellent. It's a dream to use with binoviewers!