I've taken lots of pictures of the Milky Way from the backyard of my country home. They're never very satisfactory. Oh, the Milky Way comes out, alright -- somewhat better in a photo than it does to the eye, in fact. But it's badly degraded and discolored by artificial light pollution.

I can do somewhat better on a moonlit night; even a very thin Moon overpowers the light pollution, yielding a much more natural-looking sky. But it was just a month ago when I thought of turning my camera the other way -- to the north, toward the house, the forbidden direction.

The resulting photo show exactly why north is forbidden. First, I don't want to spoil my dark adaptation by looking at the light spilling out of the windows. Fortunately for me, almost all activity happens in the northern half of the house, and all the windows on the south side have shades.

Second, the house is surrounded by five gigantic trees that block out essentially the entire northern sky. They're taller than they appear in this fisheye photo -- they probably reach within 15 degrees of the zenith from my observing spot.

And finally, down in the lower left of the photo is the real villain -- the lights of the New York Capital District -- Albany, Schenectady, Troy, and all that.

Despite all that, the Milky Way is still visible overhead in considerable detail, both in the photo and real life. And telescopic observing is impeded considerably less than naked-eye observing; spiral arms in galaxies are still readily visible. 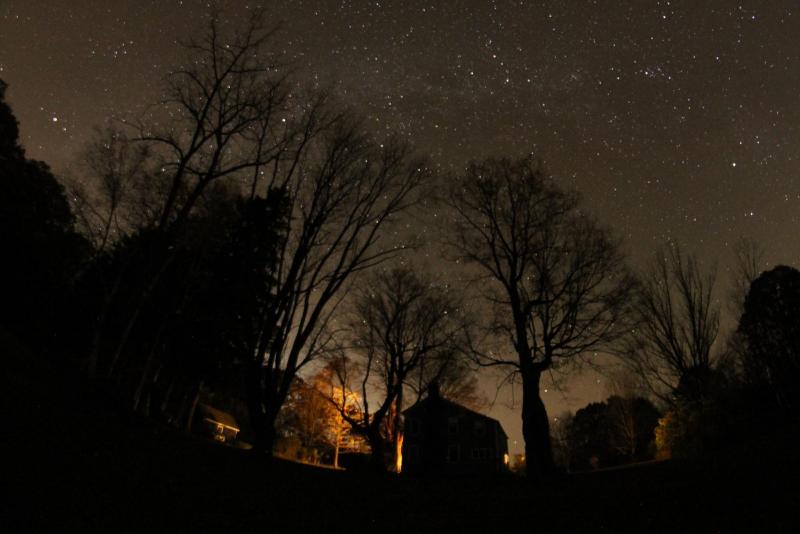 Looks to me like your northern sky deserves some attention.   Despite the lights, trees and light dome you have some good skies to your north.   Thanks for sharing Tony.

I live 20 miles east of Albuquerque, with the Sandia Mountains in between. The western sky is awash with light pollution from Albuquerque, but there are no light domes to my east and my limiting magnitude is routinely 5.0 in that direction (my eyesight is rather poor). The Milky Way is obvious when it's east, but lost entirely when to the west. One night there was a rare case of low clouds over the city, blocking its light while leaving me in the clear. I could see 6.0 that night.

Alas Albuquerque is really backwards on the subject of light pollution.

At least they are not conifer trees, you can look through branches when the leaves fall, this is like my problem facing south though LP here in Portland, OR. getting worse all the time (this while city spouting 'green', which I've learned means money hungry)    Doug Fir's in my back yard getting so tall they will soon block Polaris, which I know is just above the tip on one of them.