Not sure if this the right forum but I'm sure someone will re-direct me if needs be.

I have recently bought a set of Bob's Knobs for my Nexstar Evo 8 thinking this would make my collimation easier. However, I have tried to collimate several times following installation without any success - each time it seems to move further away and I cannot seem to get back. Has anyone else had these problems and solved them -if so could they advise me of the best method?

I am wondering whether I installed them incorrectly but I followed the procedure in the instructions carefully.

I'm at the point where  re-installing the original screws is a possible option but I will still have a collimation mess to clear up.

Any advice will be greatly appreciated.

Bob's knobs are just screws. YOu can almost buy them at the local Ace Hardware. (I say almost because you may have to tweak what you find at Ace hardware to get a perfect match. But you can certainly buy something real close at Ace.)

The real difference between Bob's knobs and the original is that you need no tools to adjust Bob's.

The problem is where the screws have adjusted the secondary. It would not help you to put the originals back in this scope. If the originals were a perfect replacement, and you put them in such that the secondary  was wherever it is now, the scope would be equally out of collimation.

Sooooo…...you just need to collimate. I know this sounds frustrating, since you have been collimating away and have not achieved what you wanted.

By that, I assume you mean that the collimation gets worse.....right? NOt that the secondary itself is moving further away?

May I suggest the following: Screw all of the collimating screws all the way in. Then out one turn. Then, tape off one of the screws. Never again move that taped off screw. (As in, never again.....even next time you need to collimate.)  Make all further adjustments to the remaining two screws until your image of the stars is as it should be.

Oh, and if you are in SOuthern California, send me a personal message. We will work something out. If you are elsewhere, post here announcing where you live and ask if somebody can help.

Getting that first collimation on a really out of whack SCT can take some friends.

When I have had to remove secondary screws and the glass/aluminum puck assembly, I started with a variation on Alex's turn counting method, I do the opposite, and turn each knob the same number of turns going in, counting from first engagement.

Starting with that or Alex's method (gotta try that one myself), move on to;

I like to move a chair in front of the scope to keep my head in one spot, and point the scope at me. This lets me move to adjust knobs and then rapidly require the reflection view when reseated.

That concentric reflection check is very simple and fast for both extreme miscollimation and for close tune-up checks. I have done it several times, alone, in under 5 minutes or so

You can see the screws and their immediate effect, without confusion as to which to turn.

This will get you right on or very close. At night or with an artificial star at sufficiently long distance.

You should end up close enough to skip the nighttime 'centered shadow' and go right to the preferred 'in focus' diffraction ring tweak.

Maybe Santa will bring you a refractor.

Yeah, MarkB. Your suggestion is more helpful than mine.

The idea about only using two of the collimation screws (whether Bob's or original) is that if you are constantly tweaking three screws, the secondary mirror itself may migrate. By using only two of the screws, you prevent this. It probably does not matter as much in an SCT, which has lots of focuser movement, and does not get collimated very often, but it is a recurrent problem with many newts, which get collimated regularly. In time one can move the primary out of position so far that the equipment no longer comes to focus.

The proper way to install any replacement screws is to start with a collimated scope, and pull one screw out a certain number of turns (until the screw can be removed), immediately recollimate the scope (turning the new screw in as many turns as the old one took to come out), and then doing a standard star collimation. The other two screws stay in precisely the same place during this operation. Then, go after the second screw with the same procedure. And finally the third.

But whatever method you choose, the issue is not a Bob's Knobs problem, but collimation itself.

This should solve all your headaches. Tonight

In addition to a set of Bob's Knobs making the mechanics of collimating easier, this little gem has helped me immensely. 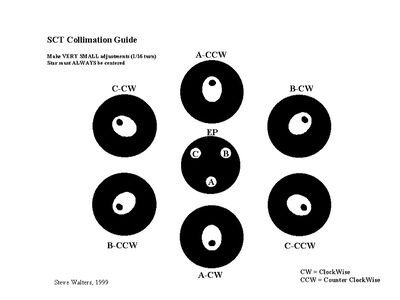 Just reiterating --- it is not Bob's Knobs that are causing the problem... they are just ergo-comfortable screws... nothing more nor less. You still have to collimate the telescope; the screws won't magically do that for you.

Thing is, many/most commercial telescopes have deficient to terrible ~adjustment~ provisions that look like they should be functional, but aren't. I rebuilt most of those on most of my telescopes. The root-cause of deficiencies are poor design and cheap materials and components. And, especially now-a-days --- those two problems are virtually guaranteed on the menu of cheap junk available.   Tom

I couldn't agree more with you. The collimation mechanisms are all cheap and flimsy. I'd love to see how you rebuilt them.

I messed up the collimation on my EdgeHD-8 VERY badly the first time I tried it. It was so bad I could not recover.

So I removed the secondary and looked at it. The mirror had a clearly visible 2mm tilt.  I just adjusted the screws until the mirror was parallel to the holder to within a couple of thousandths of an inch as measured by my digital caliper.

I put the secondary back in the scope, collimation was decent, and then I carefully tweaked it with success.

It has been a year and I am due for a collimation. This time I will use CCDInspector which has a nice feature in that you don't need to recenter the star after each of the 100 tweaks to the Bob's Knobs.

+1 on Hank's request to know more about your rebuild.

Thanks everyone for your guidance. I think I will start with Mark’s approach first -sitting on a chair to do the work appeals to an ‘ageing’ stargazer like me - with Alex’s tip thrown in for good measure. ( BTW Alex, I live in the south of France not far from Cannes so meeting up might prove a tad expensive - maybe one day!). If this does not work then I will move on to the other (slightly daunting) solutions. Removing the secondary scares the living daylights out of me - sounds more like a job for an expert even if it costs a few $.

You need the "Sheer Genius Collimation Device". It's by far the biggest sigh of relief I've found with collimating an SCT. It makes collimation no harder than aligning a finder scope.

It uses the same information in SDTopensied's post but inherently tells you which knob to turn and which direction. Move the stick around to line up with the offset of the donut hole in a defocused star. Tighten or loosen the screw closest to the stick to move the donut hole to the middle. Once it looks centered, tighten up the focus, increase the magnification and fine tune with the same technique. Repeat until you are looking at the diffraction rings of a focused star.

Thanks everyone for your guidance. I think I will start with Mark’s approach first -sitting on a chair to do the work appeals to an ‘ageing’ stargazer like me - with Alex’s tip thrown in for good measure. ( BTW Alex, I live in the south of France not far from Cannes so meeting up might prove a tad expensive - maybe one day!). If this does not work then I will move on to the other (slightly daunting) solutions. Removing the secondary scares the living daylights out of me - sounds more like a job for an expert even if it costs a few $.

I went down (am going, actually)  exactly the same path as you.  Removing the secondary is actually very simple.  Unscrew the outer ring and gently pull the assembly out.  There a small slot in the corrector and a set screw (grub screw if English) in the assembly that sticks out to fit in the small slot.  Thus it preserves the corrector/primary alignment.

I see no reason for you to remove the secondary if the scope was bought new and never disassembled, and the Bob's Knobs were replaced one by one as directed.

T-ara-fan's leveling is an option for sure, but I'd try the thread and count first.

The risk to the secondary coating is very high, and one has to be prepared with pecpads and a safe resting place for the assembly, just in case. Never give in to temptation to try and clean it. I am fortunate to have a special drop in storage housing from a scope cooler.

If anyone does remove the secondary puck from their removable housing, remember the alignment marks!

The OP will have it easier with the keyed housing.

The etched tiny numbers on the corrector plate (not removed here, so not an issue), the Sharpie marker stripe on the side of the secondary mirror glass, and, usually, the grub/set screw 'key' on the housing all line up at the 3 o'clock position, viewed from the corrector plate end. This is the side opposite the focuser knob.

Lost rotational alignments have destroyed sharpness in many scopes, including my second hand C11, very soft images, now restored, collimated from total disassembly using the count the threads, followed by the seated Casady and then a star tweak. Very sharp now. When I return to Arizona next week I'll test it further.

That scope had the ultimate failure to read the Bob's Knobs instrutions- all three removed at once, and the puck rotated within the keyed housing when it was reinstalled. And then they took the corrector off . . .