I've had bad seeing for several sessions in a row, so I haven't been trying to go for pairs below about 2" separation.

I looked up my observing notes from California days, and found all three doubles mentioned above had been observed. Scope I had at the time was a C8. That was back in the period 1995-96.

STF 191  The companion was seen with 80x as a neat point nearly South of the much brighter primary. Not difficult. Showed well at 135x also.

The same night I observed the other two Struve pairs mentioned by rugby in #2 above. 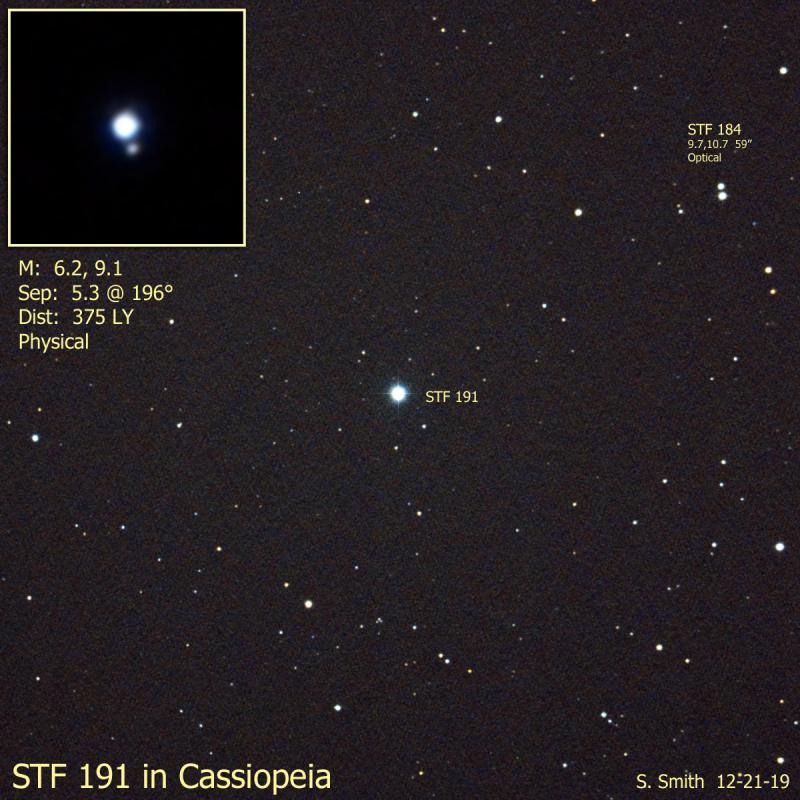 Wow, ssmith.  I view it, and then you image it.  Thanks.   Saves me a bundle on camera and imaging train.

That tiny triple below STF 191 is post #5 looks like an interesting challenge! Steve needs a WDS discoverer designation.

That tiny triple below STF 191 is post #5 looks like an interesting challenge! Steve needs a WDS discoverer designation.

Too dim, I'd think - and after using Simbad to find it and get a position, I didn't find it in WDS.

The position I measured off a DSS image via Simbad was 02 03 05 +73 44 28. I then looked at that position (radius 1') and found 3 stars of very similar position with Gmags of 14+ which makes them among the brighter ones in that small area. They had, incidentally, not shown up via Tycho/Hipparcos, which made me expect dim magnitudes.

So it's possible two of the stars are a physical pair, with the 3rd optical.

Update- seeing was better last evening and the companion to STF 156 was readily seen.

My notes from Dec 24 2019:  Seeing much steadier than previous two evenings. Airy disc visible with small undulations. First ring prominent but not completely around the star. STF191 very easy in 120mm at 85x. To the N preceding about one third of a field a coarse faint pair found . Guessed 9.5-10  15-20"  at 360 degrees.

Also, took time to re-observe STF185 a pair I had difficulty with some thirty years ago useing a C8. Once again I could not see a split. There was a thickening in the first ring but the PA was incorrect. STF 185 is 6.7-8.2. Current separation is close to one second. the  120 mm doesnt seem up to the task. I will tackle this problem pair with a bigger hammer.