I snagged an Istar 8" F9 achromat objective about a month ago.  I did a previous lite weight OTA wrapped around a similar, no-name lens that was of "OK" optical quality, even when stopped down to 6.5".  The OTA build came out good but I parted that scope out due to the under-performing objective.

But I've always wanted to take another shot at one if I ever came across an Istar 8" F9 objective so when one showed up here and on Amart, the owner and I came to agreement on price and I took delivery of the lens.

Here is a very preliminay DPAC in "green" of the objective.  Just hover the cursor over the pictures to read the titles.  I'll post others in other colors once I have it in an OTA.

Overall, it is a decent lens with maybe 1/5 to 1/6 wave of over-correction in green and a little bit of a regional turned edge (which completely gone at 7.5" aperture).  At focus, not shown, the lens is fairly smooth but shows a broad, shallow bowl/hill over its surface which I suspect accounts for the over-correction.

And speaking of the over-correction, This is the second fast achromat in a row that has shown over-correction in green.  The other, a 6" F6.5, is documented in this OTA build thread:

All of my previous achromats were neutral in green or slightly under-corrected.

Other than the narrow turned edge and ratty green light used for the 8" (a green LED party bulb, which is a normal LED bulb with a plastic green cover, hence the yellow and blue fringing), the 6" and 8" are really very similar to each other in overall correction.  Maybe both are sourced from the same vendor in China.  Not shown was a quick look at the 8" with a 7" aperture mask, which did indeed clean up the edge as well as reduce the over-correction somewhat.   I may have finally found a use for my Chromacor U2.

I will update as the build progresses.

Shouldn't these Ronchi bands be straight (provided your flat is good)?

Shouldn't these Ronchi bands be straight (provided your flat is good)?

Yes, for a neutral correction (no spherical aberration).  The curvature of the bands indicates a deviation away from a neutral figure in green, in this case a bit of spherical aberration from over-correction which is when the light rays from the outer edges of the lens focus ever so slightly further away from those more towards the center of the lens.  That's one of the reasons why the figure of this lens and the 6" F6.5 lens I mentioned,  improves (lines become straighter) when I mask down the outer edge of the lenses.  You can this in the comparisons below with the 6" F6.5" lens where the left one is at full aperture and the right one is with a 4.5" aperture stop.  That's followed by the same lens stopped to 90mm.

I hope this explanation helps.

I can see all three of them.in posting number 4

I think Pinbout meant your images are posting "top to bottom" rather than "left to right"...

Regardless, just hover the cursor over them to see the titles.

I guess that means no...

this is how its appearing over here 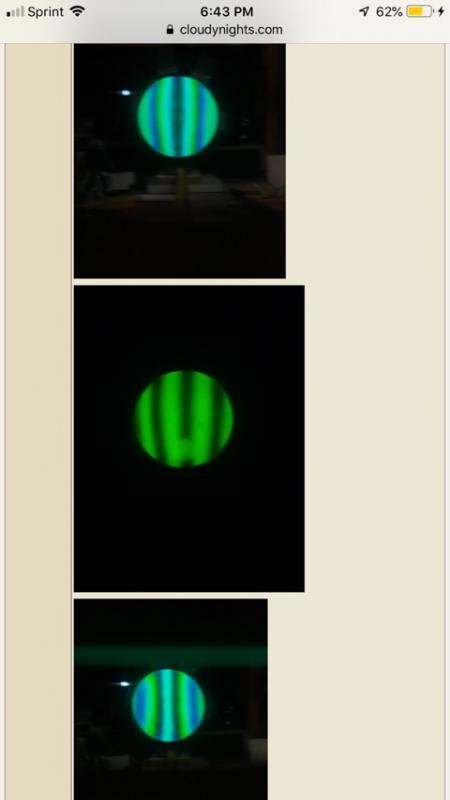 I was getting them lined up vertically too, but I had zoom set to 133%.

Ahhh, and the plot thickens....

So I've been a little busy with this project and it has gone quite well.

I measured, via DPAC in green light, a 72 1/8" back focus of the objective from the aft face of the lens cell mounting flange (Being a fast achromat, I also measured, as best I could, the back focus differences of red and blue light relative to green and got + 8/64" and +9/64" respectively..yup, it is indeed an achromat).

I designed and had made the objective counter-cell and focuser end cap.  Here is the drawing for both (Ok, so stop laughing!  It may not be exactly CAD quality but my local shop had no problem with it).

Knowing the BFL from the face of the cell's aft flange, the dimensions of the counter-cell, back plate, AP 2.7" focuser draw tube, AP 2" diagonal optical path length, Zeiss bino-viewer w/Baader quick changer adapter optical path length and desired residual focuser in-travel of 1", I could calculate the length of the Hastings 9", .050" wall thickness tubing.  This came out to be 56.5".

After cutting and squaring up the tube end, quickly assembling everything, collimating the focuser and lens, then setting it all up in DPAC, I measured a residual in-travel of 14/16" in the bino-viewer configuration.  Pretty good really.

Here it is in DPAC.

So I've been a little busy with this project and it has gone quite well.

I measured, via DPAC in green light, a 72 1/8" back focus of the objective from the aft face of the lens cell mounting flange (Being a fast achromat, I also measured, as best I could, the back focus differences of red and blue light relative to green and got + 8/64" and +9/64" respectively..yup, it is indeed an achromat).

I designed and had made the objective counter-cell and focuser end cap.  Here is the drawing for both (Ok, so stop laughing!  It may not be exactly CAD quality but my local shop had no problem with it).

Many times we do not need CAD drawings.  A few years ago, an "engineer" at the Battery Lab at the GM Tech Center, just wanted a simple wood box made.  From what I understand, it took him about an hour to create it and print it out.  I actually had to back to the lab, because he left out a key dimension.

I ran into the director of the lab, whom I have talked with many times, and considered him a friend.  I said to Tony, that his guys don't need to waste their time on some of this stuff.  I then preceded to sketch out quick drawing of the box on the back of the CAD drawing.  It took me like 15 seconds.  A drawing like that was all I needed.  Tony laughed and agreed.

-sorry for the side.

One of the things I always do with a refractor ATM OTA build is to check what the fully illuminate FOV's are in various configurations.  I check to see what components in the system set the "choke point" for the light cone and what the resultant fully illuminated FOV is.

I used variations of the good old Y = MX + B formula, where M is basically the focal ratio, B is the objective aperture and x is the distance along the BFL.

What's interesting to note is that if I went with a FT 3.5" focuser and used the proper AP spacers for mono-vision, the fully illuminated FOV grows significantly to almost 40mm.

Based upon a fully illuminated FOV of ~1", I then proceeded to calculate where in the tube to place my 7", 6", 5" and 4" I.D. baffles.   This also gave me the spacing of each baffle relative to each other, which allowed me to construct the baffle/stringer assembly.

Then the saw dust was generated...outside this time.

With an initial, then final assembly of the baffle system.

Before doing the baffles but while the OTA was still in DPAC, I wanted a more complete evaluation of the lens prior to proceeding any further.  No need to go any further if the lens was not acceptable.  Acceptable meaning no significant turned edge, no significant astigmatism at high power and reasonable spherical correction in green.  The lens so far dose meet this criteria but it does have moderate overcorrection in green as I noted during preliminary DPAC testing (but considerable overcorrection in blue).  But not too bad and I've found a use for my Chromacor U2....more on that later.   So here are the DPAC results in green, blue (not my best effort), red, and at focus in green.  Place the cursor over the image to read the title.

That's not just a little overcorrected, it's probably close to 1/2 wave.  I would be surprised if you can get it to 300X

An 8" F/9 refractor isn't meant for extreme magnification anyhow. Looks to me, the spacing might be tweaked so that green would look like the straightness shown in red.
That might improve performance somewhat.
I'm thinking anywhere from around 5x-25x/inch aperture, that scope would be quite pleasant to use.

That's not just a little overcorrected, it's probably close to 1/2 wave.  I would be surprised if you can get it to 300X

As it's a fast achromat, I've no intention of high power use at full aperture unless I use one of my Chromacors, specifically the U2 model, which adds about 1/4 wave of undercorrection in green and considerably reduces the longitudinal color differences when used with the "correct" spacing from the focal plane.

As background, I managed years ago to collect a suite of Aries Chromacor color longitudinal correctors for achromats when they were still available and very reasonably priced on the used market.  They were specifically made for the Synta 6" F8 achromats.  They were taylored and marked for use with Syna lenses that displayed various levels of SA in green.  For example a Chromacor model O1 provided about 1/8 wave of overcorrection and was meant to be used with an objective that displayed ~1/8 wave of undercorrection in green when spaced properly from the focal plane.  Or, another example would be a model U1 which added ~1/8 wave of undercorrection for use with a lens that was overcorrected in green by a similar amount.   And as "Sauce for the Goose", they could also mitigate to a degree the SA in red and blue as well.

While made for the standard Synta 6" F8 achromats, they could also be used quite successfully "off design" in other achromats as well, like those of D&G optical and Istar.  You just needed to be willing to take the time to experiment with them to figure out the right model number and where to place it in the light path for a specific objective.  I've gotten really excellent results using them with the D&G 11" F12 at full and stopped down apertures.

I've a Chromacor U2 (adds ~1/4 wave uncercorrection for the Sytna objectives) that's been languishing for a number of years looking for a home as I've found achromats were typically undercorrect or neutral in green.  But not this Istar 8" F9, which is moderately overcorrected.   So, I decided to install the U2 unit in the 8" F9 system a little over 4" from the focal plane (which is not really optimal, giving maybe ~1/6 to 1/8 wave of undercorrection in green) and have a look at it in DPAC.  Hover the cursor over the image to see the titles.

First in green with and without the chromacor.