yesterday evening I have chosen the lunar crater J. Herschel (named after British astronomer John Herschel from 19th century, the son of William Herschel) which exposed a pretty convexed floor in the rising sun. The crater has a diameter of about 150 km and lies at the northern "coast" of Mare Frigoris.

The sketch starts with Harpalus in the South, then you can see the 24 km crater Horrebow (named after a Danish astronomer from 17th century) just at the southern rim of J. Herschel. At the northern end of my sketch we have the 71 km crater Philolaus.

The dominating crater J. Herschel (too be precisely a walled plain) has a quite rough surface which is said to be caused by ejecta from the impact that formed the Mare Imbrium. This rough structure and its convexed shape resulted in a nice three-dimensional appearance.

Southeast of it, I sketched the secondary craters J. Herschel F and la Condamine B which are located in Mare Frigoris.

So here's the sketch: 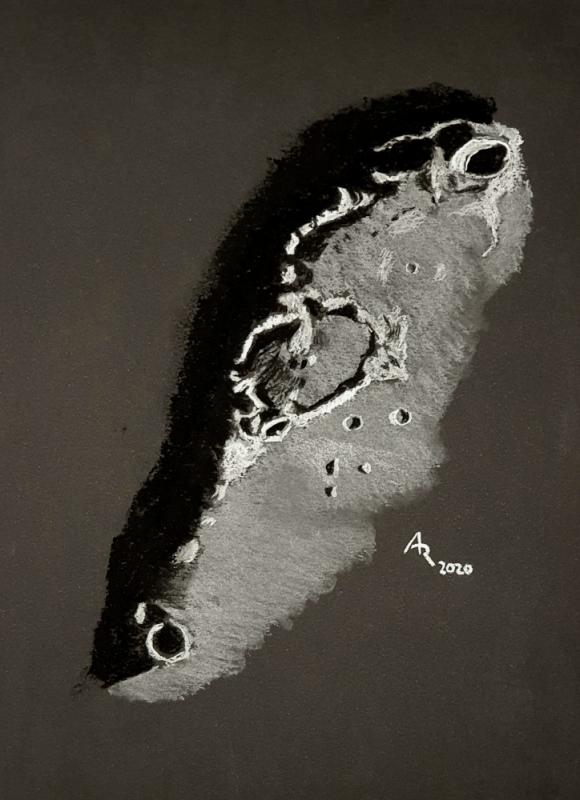 And finally here's a photo of my observation place:

I sketched the same region yesterday. It looked very rewarding, and it was.

Thank you for your sketch.

I was observing the rubble area last evening as well. It was an exceptional evening of steady seeing and I had my Questar 7 up to 384x with sharp views. I was wondering what created the rubble...thank you for providing a history of the impact area as well!

thanks for your wonderful feedback!

You've produced a beautiful sketch of this area of the Moon. I also like how you provided some historical information in your description.