I know it's been quite a while, but I thought I would drop by and say hello, as I wondered what happened to the past archives of the sketching contest monthly winners galleries of 2008~2012, 2013, 2014. I had held the record for the number of wins for lunar sketching and also the number of times to win against the photographer's with my sketches. I'm sure some of the old-timers here will recognize my name as I also appeared quite often in NASA's Spaceweather and once in Astronomy Picture of the Day, for my solar sketching, through my h-alpha telescope.

I could attach a few of those popular images now but I'm not sure how to do it directly from my cell phone which would be easiest. We used to upload them directly from our computers only at home in those days. Let's see if I can attach a couple files.

The reason I'm asking this today, is that a Sky & Telescope editor recently contacted me as they would like to display one of my large lunar sketches. It was a gallery competition winner here in 2009. I'll see if I can attach that along with one of my famous solar sketches that appeared on the cover of the Spaceweather site.

Thanks for any information about where I can find my past images, because I'd like to refer to the discussion info where they were originally posted with the conversations and discussions. I hope to use some of this information for the sky & telescope article which they would like to write about my astro pastel technical sketches.

*It appears that I cannot directly upload images from my cell phone of my large pastel sketches, as it indicates the file size is too large, so I'll go to my computer and edit this comment in a short while.

The sketches you want to see are in the Archived Forum such as the ones here.

You will need to go through them to find yours.

Frank - Thank you. I didn't expect such a quick reply.

I believe that you were the one that encouraged me the most back in those days to participate here.

PS: What is the file size limitations to post images now? 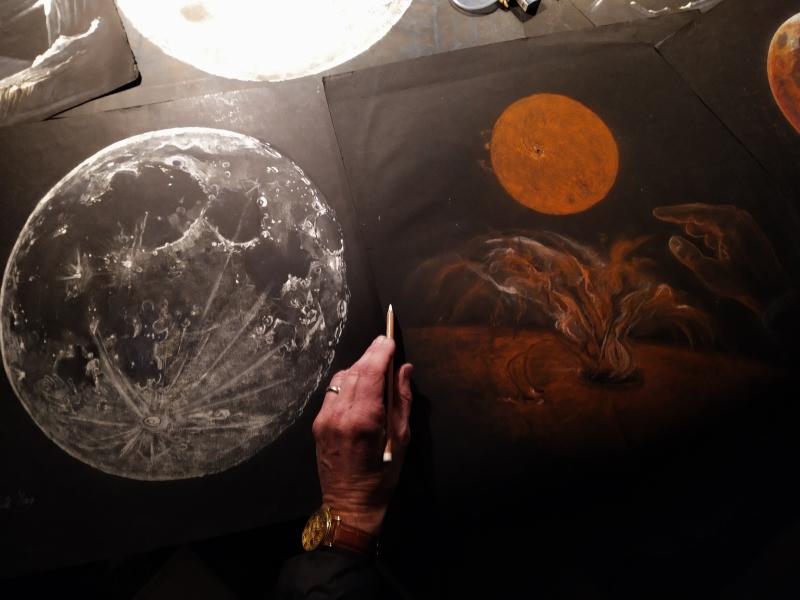 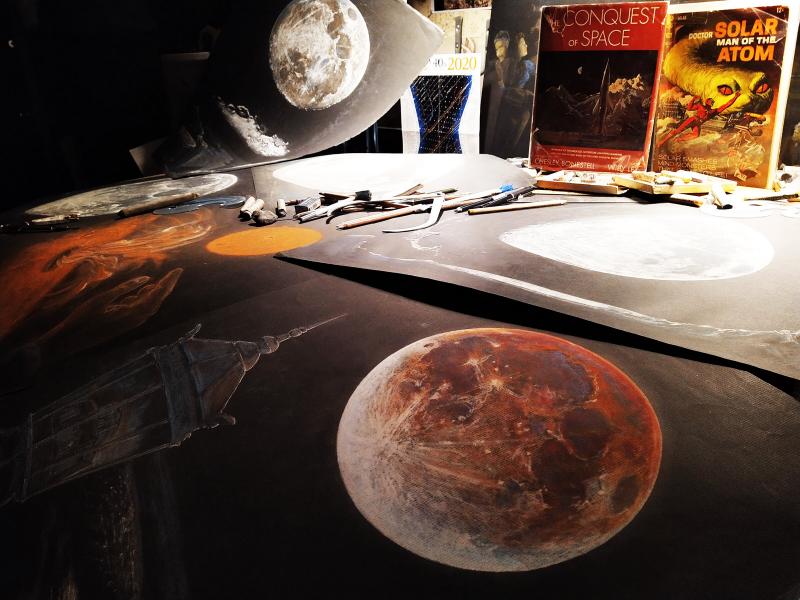 PS now you need to decide which you will send to S and T.

I hope to use some of this information for the sky & telescope article which they would like to write about my astro pastel technical sketches.

Can't wait to read it

Thank you Frank and Jef.

Yes I have the particular sketch that Sky & telescope wants as their editor chose this particular one, as he saw me post it recently in my Facebook. It's the one that I just reposted above here, as the large white pre -sketched-yet-incompleted nearly full moon posted above here in this thread, it was in the  monthly competition for the sketch forums in , [I believe early 2009,] and was chosen as the best of the month. This was the reason that I returned here and asked the question to see a compilation of all of the awarded monthly sketches, because I want to readdress the information I wrote about this particular one for the monthly contest. Unfortunately several of my images don't appear any longer in those archived monthly winners sketch forums. The text is still there with each artist describing their work but my images don't appear. There's a small icon that says photo, but it does not open and in some of the awarded inages it says image no longer available. I believe this happened when they completely redesigned the CN site and our galleries were removed. I didn't access them at the time that the site was being moved so those images became lost in the old CN site. I was hoping I could send the images again and have the moderators replace them into the archived Gallery of Awards, but I don't know if that's possible, any longer.

The last large lunar sketch that I produced was in early November 2013. And it was my last awarded sketch which the archived Winners Forum still shows the text but the image is missing. I produced it for 6 lectures that I was invited to provide to college students about my astronomy sketch art.

So not to ramble on too long here, as I've done in the past, but I became involved with making large panoramic mosaic multi stitched photos of the Milky Way from Cannon Beach Oregon in recent years, about a 2-hour evening drive one way, from my home. I drove there over a dozen and a half times last summer to try to get the best image. So perhaps I'll post a couple of those in the photography forums here because many people are demanding them now, and due to the fact that they are very large photo stitches as mosaics of the night sky, up to 180 degrees in size, as I piggyback my Sony digital mirrorless camera atop my Celestron NexStar telescope with equatorial motor drive, to take up to a hundred photos of the night sky specifically the southern Milky Way in August and my camera is adapted with my college days 55mm f/1.4 lens to capture the most subtle light of the Milky Way. The photo stitching allows us to print these up to as much as six or seven, or 10 feet wide with no loss of resolution.

Thanks again and kind regards,

Wow, those are absolutely beautiful and well done. Those look like professional art pieces, should we still call it sketching when they're that good? I'm relatively new to posting in this section of the forum, do you still post here regularly?

Wow, those are absolutely beautiful and well done. Those look like professional art pieces, should we still call it sketching when they're that good? I'm relatively new to posting in this section of the forum, do you still post here regularly?

AdirondackAstro
Thank you for the kind words. Most of these large pastel sketches that I produced were nearly 10 years ago. I haven't posted since, but I plan on submitting a new one possibly to this month's competition here at CN. I'm working on a lunar sketch from observing the moon through my telescope for the past few nights, although frustratingly between cloud and rain breaks, and even a little light snow, so it's been difficult to get out and observe this time of year.
After several observations and also taking detailed close-ups with a camera mounted through my telescope for reference. I plan on possibly having the sketch completed in the next couple days, or nights. It will be the largest technical pastel sketch I've ever made of the Moon, at about 19 inched in circumference, as a 3/4 waning phase, which was eminently forced upon me, because I could not observe the full moon a few days ago, due to inclement weather.
Mark

I remember them.
All were beautiful.

PS now you need to decide which you will send to S and T.

Yes I had already decided that I would submit an old sketch, because that's what Sky &
Telescope magazine was asking for, as it was not my decision. Their photo editor saw it in my Facebook and asked if they could display it, but I described that I thought it was never finished and it was not really up to my standards, even though it garnered a big award here in the monthly competitions in July 2009, as you saw how many of my artworks were lost in the old records, as they redesign the site, and I lost my gallery album. The archived awards still shows the text body that announces that I won, but the pictures are missing from those old archived monthly competitions.

So I thought I would submit that same work again as I have reworked it now, and I'm not sure how the site protocols view an artist taking an old work from 10 years ago and reworking it to enter it into another new competition for this month.
I'll just explain it here in a while in a less than high quality image that I photograph to work with my cell phone camera in the past few days.
I might wait to see what your advices on me entering this into the January competition and how many days I have left to do that.

Thanks again for any advice that you may have. I'll check back with the messages a little later today, as I'm running off to do large prints of the Milky Way, that I also make in recent years from near my hometown of Portland Oregon, as I drive to Cannon Beach Oregon to produce these huge multi photo stitch panoramas with my Sony camera on top of my Celestron telescope utilizing its equatorial motor drives. Maybe I'll post a few of those in the photographer's Forum here.


Also tagged with one or more of these keywords: imaging/sketching contest