“*Mars Returns*.....but likely being diminishing returns as the planet ever slides southward for some months yet........but will keep on looking.........”

So with the start of 2020 I guess I’m already encountering that situation with six early(ish) morning efforts of terrible seeing: but pretty much the norm for the circumstances. Even so there was fair success this a.m. as the blur gradually shrank/morphed to a very good disk: patience and perseverance over adversity & negativity catches the reward.....

Alongside that offering is a somewhat rough-approximation diagram of Mars’ altitude the middle of each of the coming months indicating the planet 1-hour before culmination in relation to sunrise........Dave.

For me, at almost 65 north, Mars is but a dream!  I was able to find Uranus last night, which is relatively high.  Venus we can see swimming in a ocean of mixed-up air a bit after sunset.  Due to turbulence, etc I could not resolve it is was a disk or a partial disk (it is about 50% phase right now).   Planets are not good for us this far north.

I’d have settled for another 5º last apparition.

For me, at almost 65 north, Mars is but a dream!   Venus we can see swimming in a ocean of mixed-up air a bit after sunset.  Due to turbulence, etc I could not resolve it is was a disk or a partial disk (it is about 50% phase right now).

Why don't you just observe Venus in daytime? Oh wait...

Your work so far in 2020 on Mars is so very impressive.

I going to wait a little longer and avoid the frustration I expect at this point in the 2020 apparition.

Thanks Tom, Frank and those of you for the Likes.....

With the planet sloping ever southward, as expected, few sessions with good enough seeing.

Up early(ish) on 11 dates in January – only the 19th delivered; 3 times so far this month with 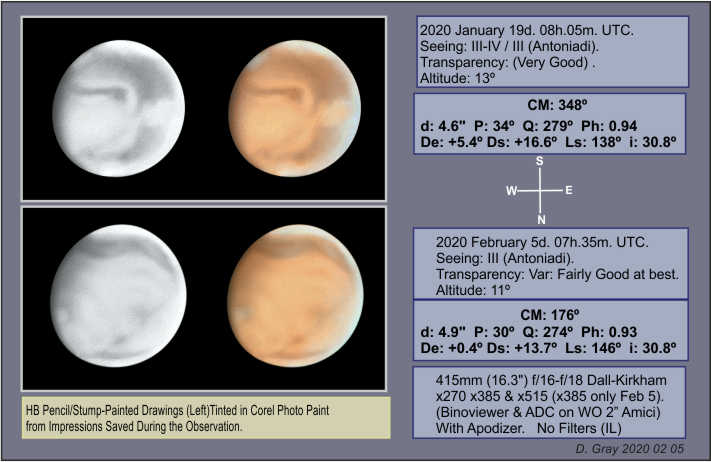 Very fine sketching this morning. 13 and 11 degrees, you always seem to rise to the challenge before you.

Excellent. No one I know does what you do.

Takes a degree of craziness I suppose....then again I always loved those

early morning sessions.  Back in my pre-retirement life, on day-shift weeks,

I very often went to work with a spring in my step after one - even a poor one.....

David, Early morning observing and sketching is a great way to start a day. Frank

Effort and tenacity always get their reward.
Gorgeous work with which I always enjoy.

Takes a degree of craziness I suppose....then again I always loved those

early morning sessions.  Back in my pre-retirement life, on day-shift weeks,

I very often went to work with a spring in my step after one - even a poor one.....

Just can't climb my ladder to draw Mars now; keep it up.

David, Early morning observing and sketching is a great way to start a day. Frank

In other apparitions I've gotten some of my best views of Mars during early morning twilight--the air above these mountains seems to be at its quietest then.  Hope that's true this year.

Nothing more to post so far.........Storm Ciara, gone, but Storm Dennis not quite, and worrying gusts last night; and

seems the prospect of another brewing in the Atlantic: I’m thinking it might be a while before I get anymore with Mars.

All the while it getting more into lighter dawn skies even if along with it gaining altitude the coming weeks.

Terrible observing weather here this February: stormy much of it, and now my Orion-nights soon to retreat........

Nice steady view with Venus yesterday afternoon; leading me to follow up on attempts with some tough double stars after dark.  Seeing broke down somewhat toward 22h. (10 p.m.) so off to bed in hope of getting Mars.  Up at 05:30 a.m./UTC and as hoped the seeing had settled back to good....Mars at first lost in some straggly cloud toward the distant hills.

That cloud was pretty stationary but slowly thinning; tho’ the brightening sky (sunrise 07:04 UTC) kept Mars (& Jupiter) from naked-eye sighting.  As I have done for some years I turned to the bright-tight double Eta Oph (BU 1118AB) currently just below 0.5” separation (PA ~228º): two nice bright cosying blue-white dots, thanks to the ADC & Apodizer in Pickering 6-7 seeing.

Thus giving hope for Mars when/if I got it...and fairly soon did so by centring Delta Sco which Sky Map Pro showed at similar declination to Mars.  Then sweeping in RA hoping the planet showed in the 2” finder through that stubborn streaky cloud, but no joy at first.  Just a matter of waiting till it finally did: no Dec. circle...replacement overdue!.......long story.....but simply keep checking the RA circle against time difference of Meridian Transit (08:13 UTC)....and got it....lost it...then kept it well enough

Only 7º altitude then and a blur-ball but a neat/tight blur-ball; enough to keep me hanging about, and it was gone sunrise (hidden by hills for ~10-mins) by time of sketching.

Planet looks about normal....failed to see any bluish cloud brightness in Hellas – always a nice sight, but more yellow-orangish to me now.

Great work here Dave! Thanks for sharing your wonderful sketches of Mars. Your blending technique presents a very realistic view of the planet.

Yes Bill stump first (picking up and applying graphite from a strategically placed penciled patch) has developed, reformed and quickened two or threefold my sketching approach these near 3 decades now.

The attached adapted from an old comet sketch gives the gist....(with Venus a strongly penciled in phase/terminator provides the graphite ‘reservoir’ to lightly drag from for cloud features).

Seems we are back to that jetstream-driven storm scenario, with snow now so not sure when my next observing might be.

Speaking of Venus I still have those obs from yesterday to post; and seems like the weather keeping me away from the scope will allow attending to that when back home later today.......... 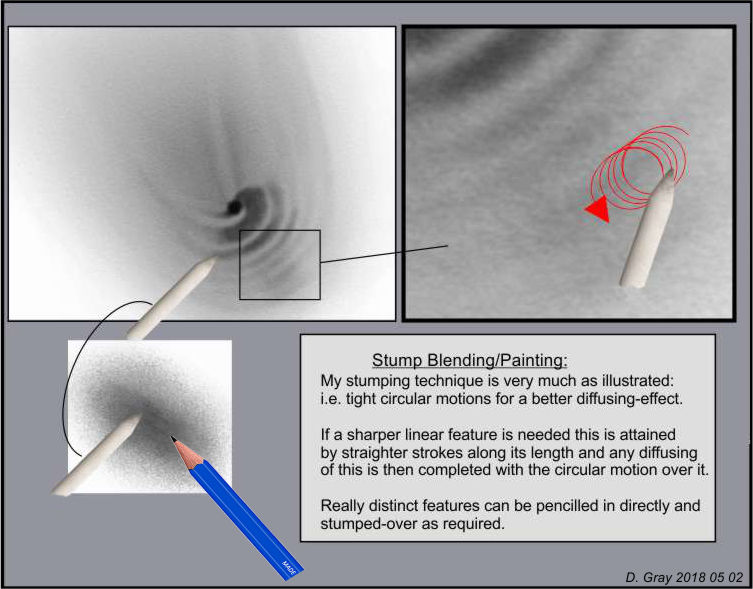 More amazing sketches. I don't even bother looking at  Mars until it about 8" in diameter.

The detail is excellent.

Thanks Frank......I understand your pause with this; but I feel we need to tune the eye-brain mechanisms to each

individual planet as they become available........I'm well prepared in that way for the comparatively huge Mars disk to

and how I see Venusian features so much easier/beyond doubt than even in my younger years.....the more we look

I understand your pause with this; but I feel we need to tune the eye-brain mechanisms to each
individual planet as they become available..."

I certainly know you are correct about this. I do know I have a good chance of fine views at 8" dia. of Mars so I should be out looking at Mars now to prepare. I have been observing Venus in recent evenings before sunset but our atmosphere has not been very good. At least Venus is pretty high in my sky and I know eventually I catch a good look.

I guess this particular thread soon to run it's course, with a future one in mind, as slow-poke Earth more steadily catches Mars. This thread being in relation to how I expected to be confronted with the planet being immersed in those increasingly lighter Spring skies as the Sun climbs ever higher.

Now Mars too climbs the northern sky and reckon to get it easier by mid May......conditions allowing.

In keeping with the High Pressure System, over us for some while, the conditions were very good this a.m.  A pastel was rendered and plan to add that to a montage of recent and prospective future ones (Venus, Mars, Jupiter,Saturn) to post asap.

Nice detail this a.m. and the disk feeling comfortably large compared to the previous viewing efforts this apparition. 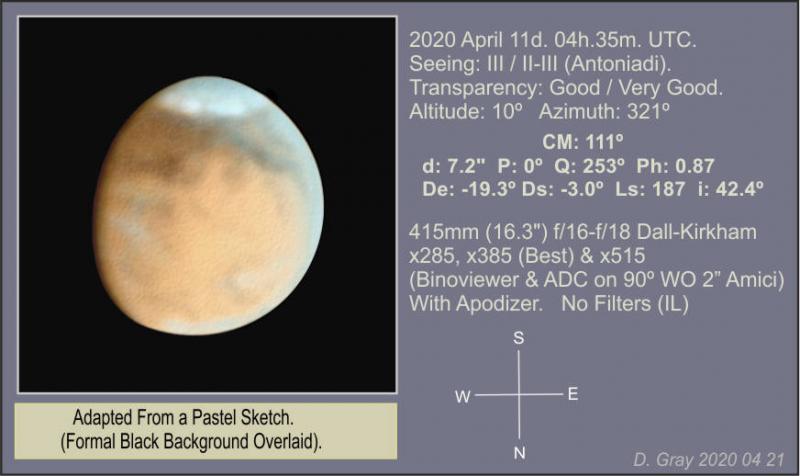 Very nice and detailed SPR stuff.  One can see much detail in the caps.

Those SP features near sparkled at 285x and stood out well at 385x.

Corrected and attached below......

but hopeful for clear in the morning (good Jetstream) with the wind switched S’West. 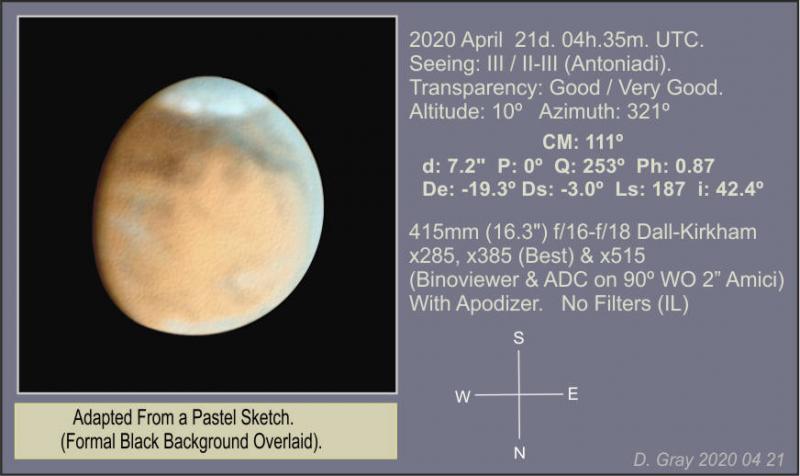