Last week+  an Edmund refractor was posted on the Craigslist, eBay, etc. thread. Better add Facebook to that title as Facebook Marketplace is coming on strong! I asked if someone would give me a contact number as I'm not interested in signing up just yet to FB. CN member Van Do9:3 (My) asked permission and passed the sellers phone number on to me. I always prefer emails or texts for such encounters but I took a day or two, a few deep breaths and I called Marcelle in Tennessee. First contact was on a garbled speaker phone while she drove. I'm not sure what she is saying but we agreed to a conversation when she got home.

She called me back a bit later. She explained how she was getting responses from all over the country about her telescope for sale ad and was worried she'd be scammed if she agreed to ship it. She wanted a local sale, cash in hand. She thought she would be stiffed for at least the shipping cost, maybe more. She seemed to know the shipping cost would far exceed the cost of the scope. All legitimate concerns. I might have been the only one to talk to her on the phone. When I described how we could make the sale happen and excuse her of any responsibilities after she dropped it off at the UPS Store in Nashville things started moving very fast. Way faster than I'm used to! There were a few questions I had, that got lost in the moment. I remember I asked if she would just throw away the handmade case and she agreed that it was very heavy. I had a feeling UPS was gonna kill me on this deal... and they did! We couldn't figure out what some marks were on the objective. I decided to take a risk. I prefer email and text for a reason.

And now Eddie Sr., The Tennessee Stud is here waiting for first light. The optical tube is cleaning up well with a few passes of a Magic Mr. Clean scrubby thingie. The finder has cross hairs and they're not messed up. Got the focuser moving again. I'll have to purchase some 100mm rings to attach the stud to a CG-5 mount I've got that has been waiting for something to hold since I moved my Tak 102 to a classic Tinsley alt/az mount. Bad time to observe, good time to fiddle with equipment.

Nice to see it found a good home.

How about the objective? Were the marks she mentioned anything of concern?

He's a early one with the single stalk finder mount and black finder, from the fifties.

I see Eddie Jr. is the same vintage! very nice!

I have a feeling you found Eddie Jr. exceptional, and you went for the Sr.,which means

a lot coming from you, knowing how well you know high quality refractors.

Glad to be able to help you complete the Edmund family. Barry graciously helped me acquire my biggie Selsi, happy to pass on his good deeds.

It may be a while before I get this out with the stars as I don't have a mount ready. I do have a CG-5 but the rings are too large. Where do we buy rings around here? 100mm will do.

In the meantime I'll be gently cleaning the tube. It is stained. Might be nicotine. Could be a deposit of Dickson soil collected over the decades. I think it will clean well, maybe leaving a slight patina. Patina is OK. There are two dings I think. That is I believe they are dings, not dents. Shallow enough that they don't bother me.

Beneath the stain it is whiter.

How about the objective? Were the marks she mentioned anything of concern?

I don't know yet. The marks appear to be between elements and might be residue from a foil spacer. The 3 spacers aren't exactly 120 degrees apart. I'm hesitant to remove the objective from this telescope. In about 1965 I tried to reload the glass into my 3" Edmund refractor and thoroughly knapped the objective. 30 years passed before I bought another telescope. I like to look through a scope before removing the glass. Whatever I see between the elements is very minor.

The Edmund refractors have a cell that slides tightly onto the tube and is secured by three screws that push through the tube and cell and thread into acorn nuts on the outside of the cell. If you remove the acorn nuts the little screws fall into the tube. So the way to remove the glass is out the cell front after removing the retainer ring. The cell stays on the tube. Robert (clam chip) has a system that always works but like I mentioned, getting the glass just tipped a bit in '65...

He's a early one with the single stalk finder mount and black finder, from the fifties.

I see Eddie Jr. is the same vintage! very nice!

I have a feeling you found Eddie Jr. exceptional, and you went for the Sr.,which means

a lot coming from you, knowing how well you know high quality refractors.

Yes, finding a local 3" Edmund OTA this summer was amazing! The optics are very good. I really had to work to re-like Edmund. When I got my first Edmund 3" I would probably have been happy to sacrifice aperture for an adjustable wood tripod, slow motion deely-bobbers, shiny black mount, wood case, .965 ep's. A Tasco 7te 60mm X 910mm. All the amenities Edmund didn't offer.

Edmund refractors seem relatively rare especially compared to the plethora of Edmund newts. I wonder if the shower cap objective covers were more reliable than those on the reflectors. Not 100 % of course, there is an occasional Eddie Jr. , right?

Glad to be able to help you complete the Edmund family. Barry graciously helped me acquire my biggie Selsi, happy to pass on his good deeds.

Thank you again, My!

If it is smoke tar on the tube try Windex the original blue stuff.

I had a feeling you liked the 3 inch since you named him.

I'm the same, when I have a scope I really like they get a name.

Smoke was covered in tar, Windex cleaned him up like new.

And yes Smoke is a dreamscope. 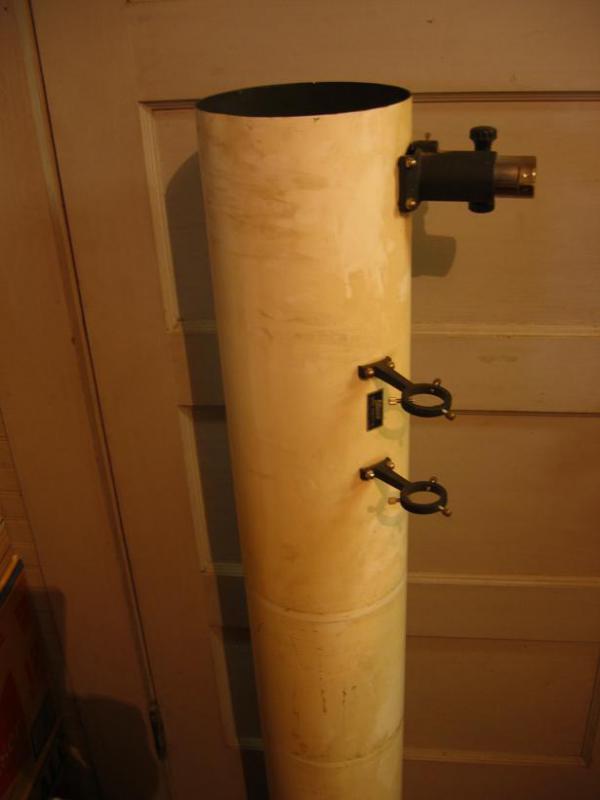 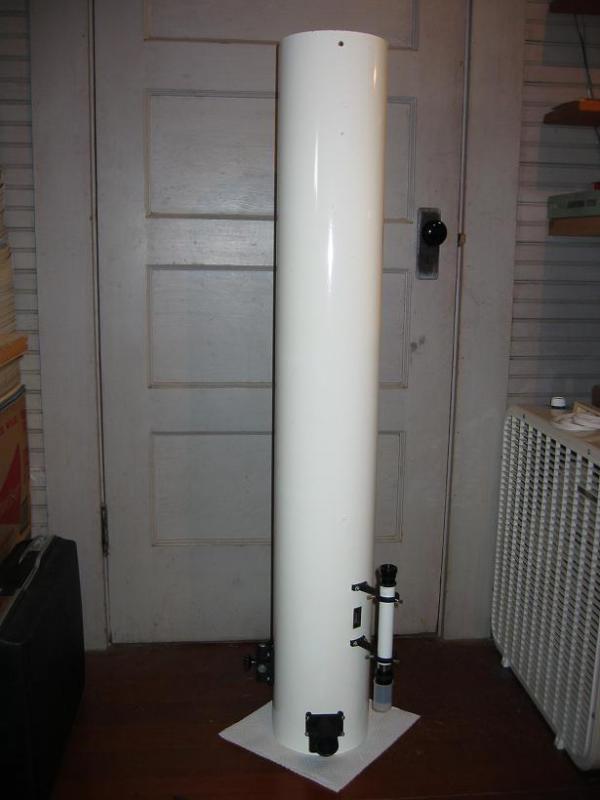 How would you rate yours optically?

These were still more affordable in the 1960's compared to many of the imports from Japan sold under different labels. Were they bought, and if so, where have they gone?

Smoke cleaned up so well! Eddie Sr, on the other hand...

Some, what I would call pleasant patina remains.

No help offered about rings for this OTA coupling to a CG-5 mount. I see Parallax are spendy and most likely worth it but wouldn't the cheap Orion rings hold the scope just as well?

BTW my post #7... Back in the day subtleties were never missed. Oh well, we are in a new age I suppose.

I have Orion rings holding my Celestron/Vixen 4 inch f/13 to a Televue EQ mount. They seem to work fine. It's a Losmandy-style dovetail, very solid, so the rings are probably the weakest link, but functionally they seem to be fine. I may upgrade to a more secure ring set at some point, but the Orions are doing the job, especially for the price.

The Orion rings will work.

You will probably need to remove some or all of the felt.

they are easy to break

Without the felt they fit great.

I had a set of ADM rings for mine. I cut slots in the original mount saddle and attached them directly. I needed strips of dense furniture felt on the lower halves of the rings to snug up the tube.

together again. I added some slop so I could use felt.

Remove the felt and they are a good fit. Just don't adjust the rings too much because without

felt you risk some abrasion.

The cat's meow are the Parallax rings, they fit perfectly. And you will probably end up observing 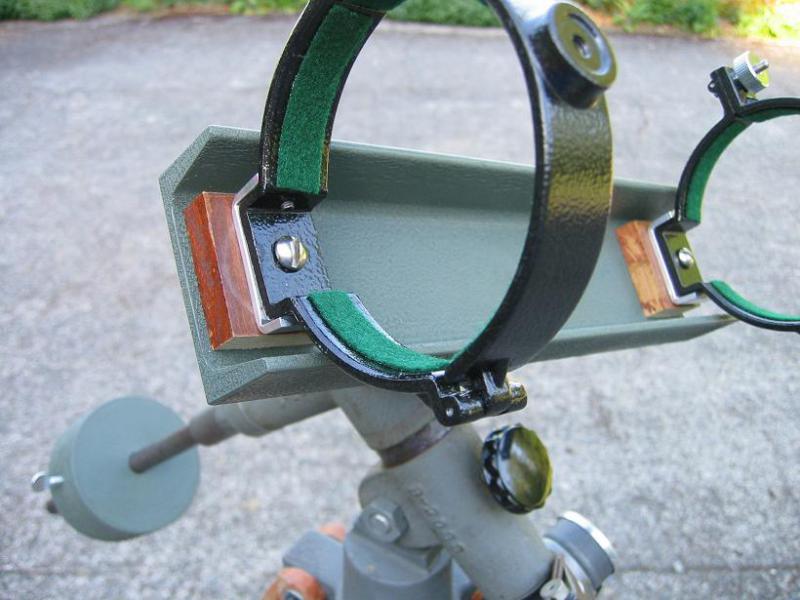 The Orion rings on my 4 inch/102mm f/13 refractor are actually the 116mm inner diameter model.  They fit fine.  Did not have to modify them.  Don't know how big your tube is.  If the lens 102, I'm just guessing the tube must be a little bigger to hold the cell, though.  That's how mine is.

The Orion rings on my 4 inch/102mm f/13 refractor are actually the 116mm inner diameter model.  They fit fine.  Did not have to modify them.  Don't know how big your tube is.  If the lens 102, I'm just guessing the tube must be a little bigger to hold the cell, though.  That's how mine is.

That would be much too big for the tube on the 1964 White (overpainted red) Edmund 4” F15. The cell slips over the tube. Like Robert says, its right around 102mm o.d. Your F13 must be in a different tube.

*** I did remember the source of the rings that I used  (shown above). They weren’t ADM, they were Stellarvue. They were 105mm i.d. and required shimming with dense furniture felt (as seen in my picture. They’re not cheap, and currently retail for $129.00!

I'm using Orion rings on the Jaegers 4" f/15.  Lined with self-adhesive flocking, just right.  But I want to get some nice heavy-duty rings from Joe with my tax refund.

Thank you all for sharing your experience! I'm now thinking on the first clearish night I'll wrap a towel or tee shirt around the tube and use my available too large rings Tinsley mount or CG-5 mount for a first light. Before I invest heavily into rings this stud is gonna have to prove himself! If the optics seem legendary I'll spring for the best rings, otherwise...

Cut to the right length and even doubled up if necessary.

If you look close you can see the belt in these rings. 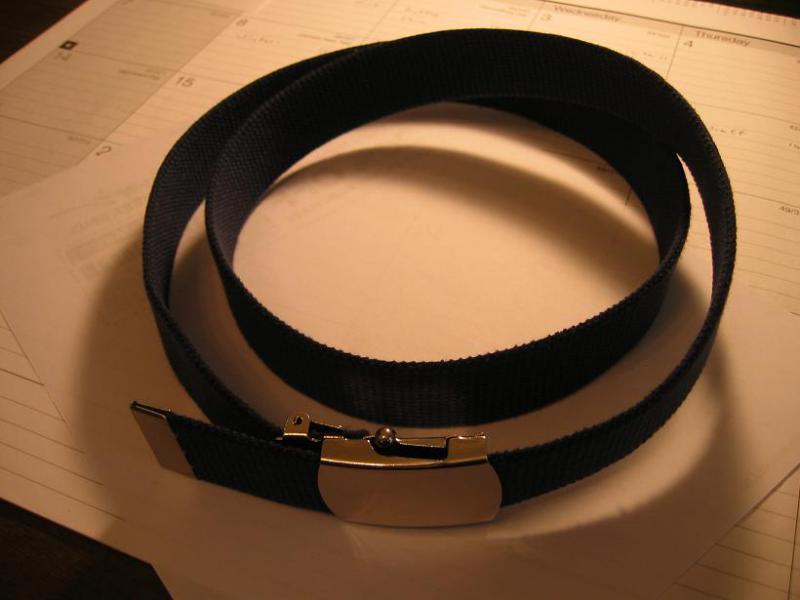 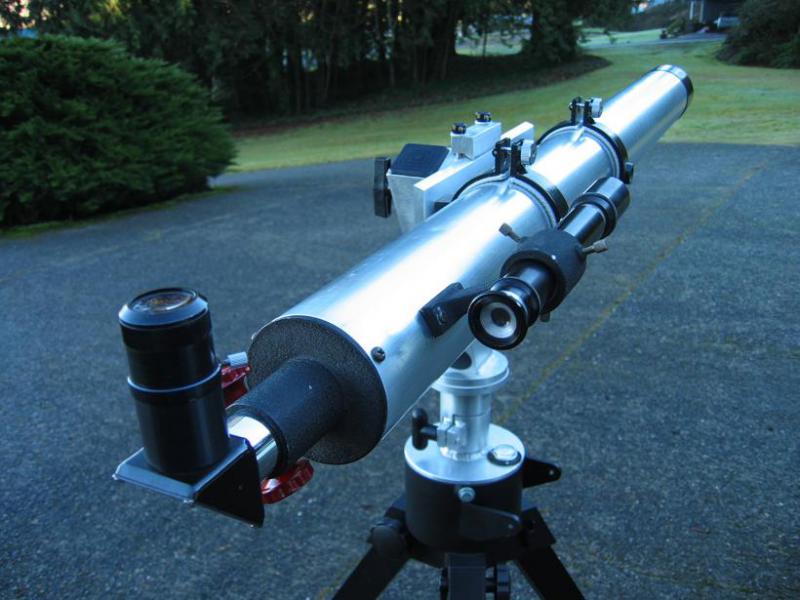