Thanks, and a hearty yes! I have read Bill's books twice over and we discussed this and other topics optical. It continues to astound me that many otherwise thoughtful avocationals fail to grasp conditional vs complete 3-axis binocular alignment.

Note: The generalized topic of multi-axis alignment occurs over and over again in opto-mechanical devices. I fondly recall a Laser Comm gizmo where the coudé  source had to properly maintain pointing as the vehicle bounded around ground, sky or space, deftly/seamlessly countering the gyrations. Conditional alignments would have been laughed out of the shop and properly condemned by Field Ops. Nother similarity is balancing of telescope imaging mounts, discussed ad nauseam here on CN. Far as I can gather... almost no one seems to understand or care whether they are conditionally balancing (at just one pointing) or globally balancing (at all pointings). Merely conditional balance inexorably/ultimately leads to premature drive failure. The little extra effort involved in understanding and doing it right... to begin with... could save so much aggravation and wasted effort. Many other similarities... like collimating telescopes...    Tom

Regarding conditional balance.. I made up this little cartoon a number of years ago.. 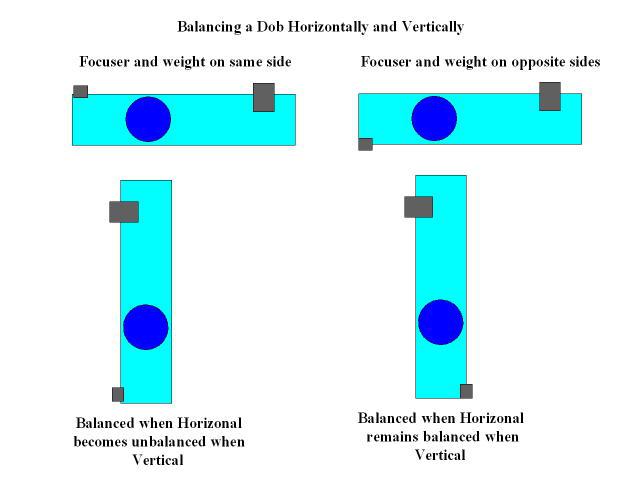 There's a diagram here, 4.2 Figure 13 where Bill is credited for the terms in the endnotes: https://sites.google...n-of-binoculars

There's a diagram here, 4.2 Figure 13 where Bill is credited for the terms in the endnotes: https://sites.google...n-of-binoculars

Thanks for posting.  But please tell this Newbie who "Bill" is and the name of his book.

Quickie question:  so, above you have a couple of methods to determine if binoculars are "conditionally" aligned, i.e., aligned at a specific IPD.

Is it safe to assume (and feel free to unload on me because I have no face to lose!) that if you defocus your diopter in one barrell and try a few different IPDs that the odds of the binocular being collimated have greatly improved?

Is it safe to assume (and feel free to unload on me because I have no face to lose!) that if you defocus your diopter in one barrell and try a few different IPDs that the odds of the binocular being collimated have greatly improved?

Nothing improves the odds of parallelism by using the above methods. The methods pictured are helpful in determining alignment at one specific IPD only as Bill points out in the text.

Your bino may appear aligned at that one IPD but that doesn't prove they're collimated.  As you swing the binos one way or another in IPD movement, you may see the images move away from being concentric/merged.  If the image relationship changes with IPD, the bino is conditionally aligned.  A bino that's collimated will remain aligned throughout the IPD range; both optical axes and the hinge axis are parallel.

This diagram (figure #13 from the above linked Raphael Cobos article) says it all...

Thanks for posting.  But please tell this Newbie who "Bill" is and the name of his book.

For anyone curious about Bill Cook;

BINOCULARS: Fallacy & Fact: The Instruments, The Industry and You

Read the reviews.  Bill was a long time member and contributor here. He and Cloudy Nights parted ways.

Is  your meaning.....that you try different IPDs and the results are still good...

At the moment, emperically and analytically,  we cannot quite assume this yet,

since actual observations have not been taken of that actual case.

For starters, you would need to specifiy the two IPDs used.

Those would be good benchmarks to test.

A direct analytical answer (3D vector calculation) has not been given....that I know of.

The next step is to determine..... what difference is significant?

The distance becomes an objective spacing of 117mm (actual measurement)

Many people expect decent use of the binoculars to include a near point of 30 ft...

...that is unrealistic, collimation-wise.... it will cause some discomfort

at that point, the 'misalignment due to the two centerlines being different is:

(looking out from the objective) from centerline to centerline, from left to right field.

a difference of ~18  'acuities' that is found to be OK

(at least, according to my testing out the window. laser range-finder confirms 76 ft)

So what can we check against?

I turned the IPD to 74mm, which made the objective spacing:  119mm

Oddly enough, the target difference of an assumed perfect pair would be

almost the same.  That's the nature of large and small circles..

It looks like, from a 2D analysis, the 'ballpark' of misalignment due to

For a more definitive answer, maybe our local 'ray-tracers' would be ab le

to figure the vectors in 3D, though that may not be the same calculations their

But....it is hard to see how the trouble due to different IPDs .is in the same

ballpark at all as the misalignment due to common near-range use.

aligned, but not necessarily in all 3 axes.

It is also a slightly extreme example...that is understandable, to illustrate a test method.

It does not, however,  address a system that

is perfectly aligned at, say, 60mm IPD and then has the picture taken at 80mm IPD.

That empirical evidence has yet to be given, and calculations also don't exist..

The case for conditional alignment in Figure #1 seems to be used to bolster 3-axis alignment's importance.

(ie; a problem is being solved that mostly doesn't occur)...

eccentrics, the Wollensack 6x30 M5 issued to the US  NAvy and Merchant Marine.

(using the 4-inch-from-eyes multiplier) made hom quite happy as well, and I was baffled

fell to 'the deck' and were fixed and re-aligned.   Sadly, most of them sank

with Merchant Marine sailors in the mid-Atlantic, along with thousands of tons of Spam

and baked beans headed for England..

For the same reason?