Beginners question here need some advice?
Is there any real benefit in having a 45 to 60 mm eyepiece for a 5” refractor f7

Cant see eyepiece in this range being used enough, as within binoculars territory, opinions appreciated?

Definitely bino territory.  Next question is, what are exit pupils at those magnifications?  8.5 and 6.35.  Not that good!

If one's pupils dilate to 7 and 8.5mm, the exit pupils of the 45 and 60mm would help brighten the image.  That's useful with narrowband filters.  Of course, it also reduces magnification, so there are diminishing returns for smaller objects.

Field of view is determined by the eyepiece field stop - not focal length.  A 20mm plossl has a very different field of view than a 21mm Ethos.

For a refractor, that's OK, even a good thing! The 6.4mm and 8.6mm pupils may and will underfill your eye's, but that's not necessarily a bad thing, especially when using a refractor... provided you would gain field by doing that (some refractors have huge available field). The TeleVue Panoptic 41mm most certainly comes to mind. Indeed, that is an eyepiece that you should have!  If you don't --- buy it now; will love the immersive experience!  Tom

Sweep there are two practical limits:

2. The exit pupil from the eyepiece should be a tad smaller than the entrance pupils your eye - otherwise the edge rays strike your iris.

This is typically 5-7mm diameter and a few factors to consider - age, and the ambient light level - an urban light-polluted sky will not allow your iris to fully open.

In this respect 5mm is a safe value.

5mm x f/7 suggests a 35mm eyepiece, though a 38mm SWA (70 degree apparent field of view) would be pretty much ideal. Longer than 38mm will be somewhat pointless.

I sometimes use a 55mm TV Plossl in an f/7.5 refractor with an OIII filter for the Cygnus Loop and similar. 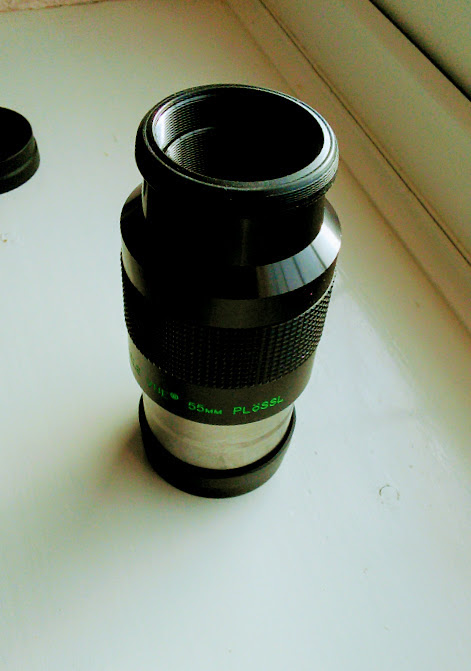 Masuyama eyepiece in the 45 to 60mm range

That will produce an exit pupil approaching 9mm. Nobody has eyes that big -  not even my wife.

Conversely it implies you're only using 100 mm of your scopes aperture, the rest of the light is not entering your iris.

Better stick to 30-something mm.

is that 21.39 mpsas from a chart or measured?  Chart values are generally somewhat optimistic about how dark the skies are, generally they'll be somewhat brighter.

This is how I see it:

As others have said, matching the exit pupil to your dark adapted pupil diameter is useful, this maximizes the brightness of both objects and stars while retaining as much magnification as possible. If the exit pupil is larger than your eye, it has the same effect as putting a mask over the objective.  It will dim stars and objects (nebulae etc) will be smaller.

For most observers and most situations, the 40mm SWA would probably be the better choice.  Few observers can take advantage of a 7.9 mm exit pupil and for those than can, (I am one), the smaller 5.8 mm exit pupil with the greater magnification will almost always show more, be more useful.  It's only for the largest, faintest objects with a filter that maximizing the exit pupil is an advantage.

My thinking goes like this:  Regardless of whether you decided to buy the 55mm, you'd want the 40mm SWA.  In general, it would be the more useful eyepiece and for most observers would be the only one needed.  Later, a 55mm could be added.

So, what objects?  This time of year, I find the "Heart and Soul" Nebular region, the California Nebulae, the Flaming Star Nebulae are helped by large exit pupils with filters.  The nebulosity in the Pleiades is best seen at a near maximum exit pupil without a filter.  Barnard's loop is another.

Sweep, where are you ? 10:1 you're not under what I call dark skies, though admittedly I am spoilt here,

41 Pans excel in these skies.  Largest well corrected field.  That alone makes it worth it, as Tom mentioned above.  The Milky Way is lovely with big pupils under dark skies.  Once the field is maximized, there is not much to gain when the exit pupil is already that large.  It's almost 6mm with your scope.  When you exceed your eye's pupil, you decrease the effective aperture, but it may be worth it if you can get more field.  The 41 Pans already max it out, so not much to gain.

By what ND factor do UHC and OIII filters reduce the effective exit pupil to?

An exit pupil too large for an unfiltered view, may be dimmed down to an effective smaller size by darkening. In that case there will be a calculation showing what eyepiece & filter combination will give the best result for a particular telescope.

As long as you're okay with an AFOV in in the 45-60 degree range, it shouldn't be a problem. Depending on your dark adapted pupil, you should be able to go up to about 50mm on an f/7 without losing resolution. At that low a power, it probably won't make much of a difference anyway if you exceed that by a bit.

Personally I wouldn't go any longer than a 55mm Plossl.