Popularly known as the "Skull and Crossbones Nebula, NGC 2467 is an active star-forming region in the constellation Puppis.  The presence of large hydrogen gas clouds is a key ingredient required for the creation of new stars.

Observations of the many stars in NGC 2467 suggest that they may be more a superposition of loose groups of stars at different distances than a coherent open cluster of stars energizing the nebula.   I guess it really depends on one's perspective in the universe, but from here, I think it looks awesome.
If you look towards the right off centre, there is what appears to be a bright gas wall.  The newly formed stars are slowing devouring this glowing rift.  Moving towards the centre, there are many dark dust lanes obscuring parts of the nebula.  Within these areas, the process of forming new stars is taking place.  Several Bok globules can be seen as well (these are dark globule structures).  They are very similar to those found in the Running Chicken Nebula.  Infrared detectors can cut through the dust in these areas and create amazing images of the process of newborn stars.  Unfortunately, my camera does not allow me to look into these areas.

My aims with this project were fairly simple.  I wanted to highlight the dust lanes and bok globulus within the nebula.  These areas simply add a layer of depth into the final result.  The RGB palette is my preference in astrophotography.  But I really wanted the extra details available in the narrow-band data that I captured.  Merging such different data sets into a single image that resembles a traditional RGB rendition can be challenging.  Hopefully, the result isn’t too far off base and pleasing to look at. 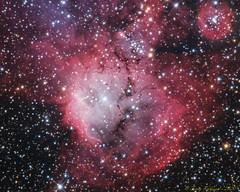 I think that another 30 minutes would really make this image pop.

I think your right.

But in all seriousness - DANG!

But in all seriousness - DANG!

Another wonderful image Terry! Thanks for sharing!

Another wonderful image Terry! Thanks for sharing!

My pleasure Mike.  Thanks for looking.