Whats your Planet Killer telescope for 2020?

279 replies to this topic

My first serious telescope was a Jaegers 80 mm f/15 refractor and I had no problem seeing the GRS, Ganymede crossing the globe or shadow transits on Jupiter or the Cassini division in Saturn's rings or its major belt or even Uranus and Neptune as perfect blue-green discs or the polar caps and Syrtis Major on Mars, in many cases the first time I observed them

It does take some time and practice to get accustomed to viewing through an astronomical telescope at astronomical objects, but it does not take years, at least not in my case.  After several observing sessions I was well acquainted with what to expect from my telescope and I was sure I was seeing everything it could present to me, simply because I read a lot about observing and compared my experience at the eyepiece with what the experts were saying.

And I knew that if I had a larger aperture telescope I could see more.  At the same time, I came to realize that what my telescope revealed was dependent upon the seeing.  Point in fact, to me a 10" f/5 Newtonian shows more planetary and lunar detail than any 4" aperture, regardless of its ilk, as long as the seeing is reasonably good, and I'm talking 5-6/10.

Maybe other's experiences are different, but that is mine.

Mine too. However, I don't have large scopes any longer because of physical health limitations and the fact that clear nights happen less often now in my locale. I am however, thrilled with my last remaining scope, a 3" F12.75 Fluorite Apochromat refractor!!  On the rare nights of good seeing and transparency, it's a super fantastic performer!!

I'm actually surprised any alt-az without active fine adjust controls can work past 200x effectively.  I haven't used a DM8 but I've used a lot of other ones and they are all just "ok" once power climbs.

I think it is really just what one gets used to.  All I use are alt-az and most do NOT have slo mo controls and I find no issue observing up to 350x with them.  250x is a walk in the park.  Once I get to 400 is feels a little more challenging but less than that is just second nature.

I notice this with everything...more you do it...easier it becomes until it is second nature and no effort at all.  I recall the first year I started motorcycle riding.  Anything past 40 mph seemed so fast and risky.  With a few years under my belt 100 mph+ was a walk in the park.  Same flying high performance jet aircraft.  Literally took over 3/4 year to finally feel like was ahead of the power curve flying those.  So took a long time building the skills and reaction time and forward thinking before I was confidently operating the machine in front of the aircraft instead of playing catch up from behind.  I remember well that flight when I finally popped ahead of the aircraft very well...finally felt fully in control of it.

Here it is! It's no 'old' telescope type compared to the Newtonian or refractor, since it was invented in the ninenteen thirties. The Kutter is still quite 'popular' in Europe (Holland, Belgium, Germany, Austria) with ATM's. AFAIK only Lichtenknecker Optics still offers mirror sets and  lenses commercially on demand. Richard Gierlinger of Austria recently built a 14 inch Kutter Schiefspiegler for his semi-professional observatory.

my planetary killer telescope, takahashi fc- 100 dz and not only for 2020, but for several years to come.

Here's my modest planet killer.  Just a beat up, bare-bones AR5 on an LXD55 which has seen better days.  It all works though.  The DIY spreader tray really helps control the wiggles.  All in all, I'm satisfied.  I have some used spreader bars on the way to replace the temporary "bars" I installed after the OEM bars broke.

The rig is satisfactory as is.  But I'm looking forward to upgrading the mount, focuser, diagonal, and finder scope as soon as funds permit. 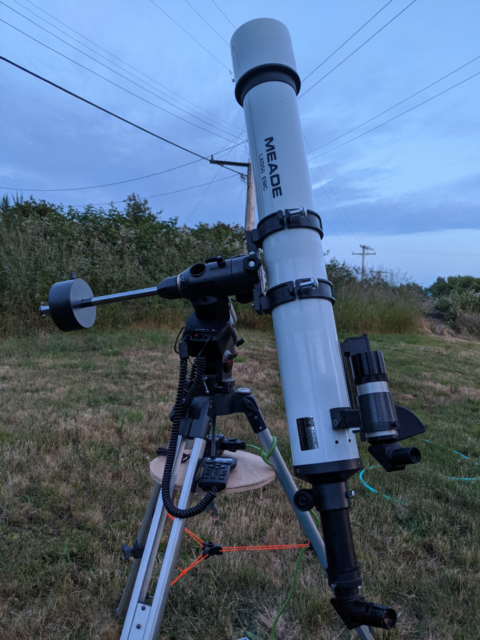 My 228 mm tmb refractor produces decent views on good nights which are scarce.
My 16 inch rcos is surprising as a visual scope. Ion milled optics.
C14 is the orange tube era. On the best nights it's good
I have an untested mewlon 300 crs. I need a mount. I may put it on the 16 inches mount to check it out. I have heard good things but I'm still going to need good seeing.
The 32 inch is not put togeather so it's out for now.
My other scopes are stored for now. I'm banking on the mewlon. I hope it's a good one

That would be a very interesting comparison between the 9 inch APO and the 12 inch Dall-Kirkham.

My main "planet killers" are my Teeter 10" STS with Zambuto quartz mirror and a Tak FS 152. Both have shown me exquisite views, though the 10" shows more on average to above average seeing nights/mornings. The 10" adjusts in approximately 15 minutes and gives refractor like views almost instantaneously.

My main "planet killers" are my Teeter 10" STS with Zambuto quartz mirror ... and gives refractor like views almost instantaneously.

This scope is something special on any target.

There is some hope for Mars for the upcoming opposition from here. It will reach just over 52 degrees altitude when it transits at opposition.

It will rain, heavily, without end.

This is the refractor group and the topic of "planet killers" is on the table again.   I'm not sure how often this topic arises in the catadioptric and Newt/Dob discussion boards.  No matter.  I know what to do.

I advance my Vixen ED81S as the ultimate planet killer.  Nothing else can touch it.  450x and no image breakdown.  Absolute clarity!

Even better than that water tank you have standing next to the wall?

I have not fired up SW100ED or SW120ED (my official Planet Killers) yet this season, but I did swing my AT72EDII at both Jupiter and Saturn late last night as the pair cleared an obstruction.  Long story short; I pushed the 72's optics to mag 259x (BST 5 + TV 3x) and I was surprised at how well the planetary disks and detail along with color held up with both Jupiter and Saturn.

Jupiter's poles were clearly defined and separate from both NEB and SEB, along with a well defined EZ.  There were also hints of the NTB, but at that mag on an alt-az mount without tracking or slow-mo controls, I was busy just trying to keep Jove in the FoV... Also, Jupiter displayed a soft orange tone, and there was a small amount (very small) of false color, but it was NOT an issue at all.  The GRS was still an hour away, so no observation there.

Saturn was a dim yellow, and I could clearly see the Cassini division, the gap between planet and rings and I could also define a planetary belt.

In the past, I've pushed my Achros and MAKS to rather (as to be expected) dismal results, so last night's results came as a bit of a shock...a really good shock.

So, as of right now, the AT72EDII is my official Planet Killer! 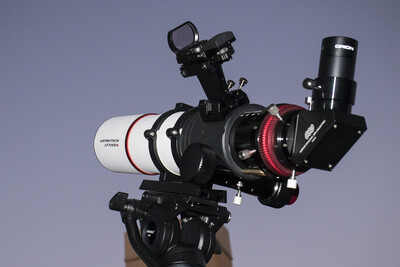 Therefore to combine the best of the two, I am thinking about getting a 140mm APO. Visual only, on Jupiter, can APM140ED doublet give a similar view like TEC140ED?
Or I just looking for a used TEC140ED?

My MK66 saw action on Sunday night despite poor weather. But tomkorroe is looking exception and I’ll pull out the 10” for some action around midnight.

Oh.. and my camera has shipped from China so maybe some images this month ... if they’re not too embarrassing.

And its Go-to as well (very clever)!


Also tagged with one or more of these keywords: planet