i purchased a laser collimator off ebay a while back and cant seem to get it to work. i set the laser so that the beam stays in one spot after turning it 360. checking my dob with a collimator cap every thing seems to be right on but when putting in the laser collimator and turning it on the beam appears at the outer ring of the bulls eye and not centered. i only payed $25 for it on ebay so maybe its a cheap one and dont work right in the first place. i have to turn it up to the #5 for the beam to appear. any advice on this would be appreciated. thanks, don

You can check if the laser is straight by putting it in a 'V' shaped block pointed at a distant wall.  If the spot moves, it's not straight.  The laser may have adjustment screws that you can use to tweek it in to line.  Also, check to see if you are using a 2" to 1.25" adapter that isn't straight.  That gave me fits until I realized my adapter was off.  As far as the beam brightness, it might just need a battery.

Sometimes the secondary (which should be aligned first) is not aligned so the laser spot is not in the center of the hole in the primary dot.  The laser hits the paper and doesn't reflect back to the laser bullseye.

I would check your secondary is positioned and rotated to the correct rotational position through the focuser first. This can't be done with the laser. Read up on secondary Collimation.

Then use the primary Collimation knobs or screws to align the return beam in the center of the target.

I will second the comment on the adapter. May of these adapters don't consistently register either the eyepiece or collimator consistently.

I bought a paralizer adapter which I really like.

If you have a Barlow, also search on the Barlowed laser technique. Which is even better way to collimate.

A well collimated and centered laser can replace the cross hairs.  One tilts the secondary so that the beam hits the center of the primary center spot.  The laser will tell you nothing about of the secondary positioning when there is a flat secondary - check that with the collimation cap.

In the first two, the laser appears collimated at the intersection points at those distances.  In the third, it is collimated for all distances.  It is rare that one can control the centering of the laser, so if there is a big difference (also rare), collimate the laser at the focal length of the scope.  Then, just adjust tilt of the secondary so that the laser hits the primary center spot.  Pass the laser beam through a barlow to adjust the primary tilt after that.

Yep... when I collimate my dob... I insert the laser... adjust the secondary so that point of light is in the center of the primary... go to the primary and adjust the screws so that the reflected light back to the collimators bullseye is centered.

Yep... when I collimate my dob... I insert the laser... adjust the secondary so that point of light is in the center of the primary... go to the primary and adjust the screws so that the reflected light back to the collimators bullseye is centered.

When I collimate my Dobs, I first adjust the secondary so the beam is centered in the primary marker.

To adjust the primary, I use some form of Nils Olof Berlin's Barlowed laser. This is Nils' 2003 Sky and Telescope article where he introduced this technique to the amateur community.

The beauty of the Barlowed laser is that it's not sensitive to alignment of the laser, the tilt of the secondary nor the registration of the laser.  These all effect the accuracy of using the return spot beam.

The Barlowed laser uses a Barlow with a paper target on the front side with a hole in the center.  The basic principle is that the laser beam passes through a hole in the center of the the Barlow, this diverges the beam so instead of a tiny spot showing up on the primary, a diffuse beam, illuminates a large patch on the primary.  This reflected back and seen on the paper target as the diffuse beam but with a shadow from the center marker.

I started using laser collimators about 20 years ago. My first was a 1.25 inch Howie Glatter.  When Nils's article showed up, it really was the last step that made precise collimation possible with a laser. I used the basic technique for a number of years but in 2007, I bought a 2 inch Howie Glatter laser along with the Self-Barlow attachment and the TuBlug.  These are forms of the Barlow Laser that just make things easier.  Finally, almost 10 years ago, I purchased the TuBlug, this makes collimation even easier, there's a angled "window" and the shadow can be seen externally.

I am a big supporter of Howie Glatter laser collimators.  They are precisely machined to fit the focuser, and they are aligned to within 15 arc-seconds, that's 1.0 mm at 44 feet.  They have aperture stops so the beam is tight and round.  Since Howie passed away a few years ago and Starlight instruments took over production, they've gotten quite expensive. 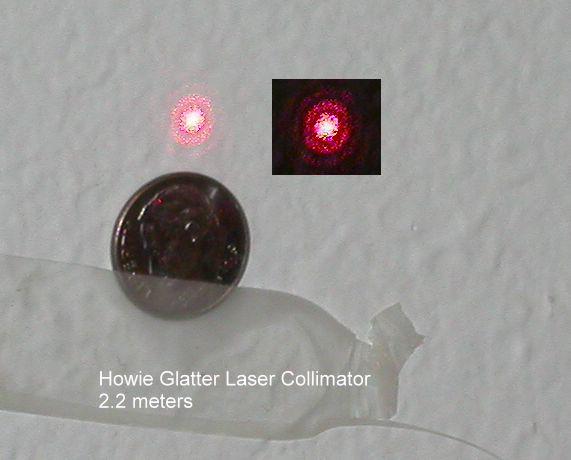