There is a series of lines to the right in my Oiii data.

It is in every one of my subs.
Here is the crazy:
It appears to move with the dither.

That would imply it is in the sky and not in the optical train.

But I have never seen anything like this in any other picture. 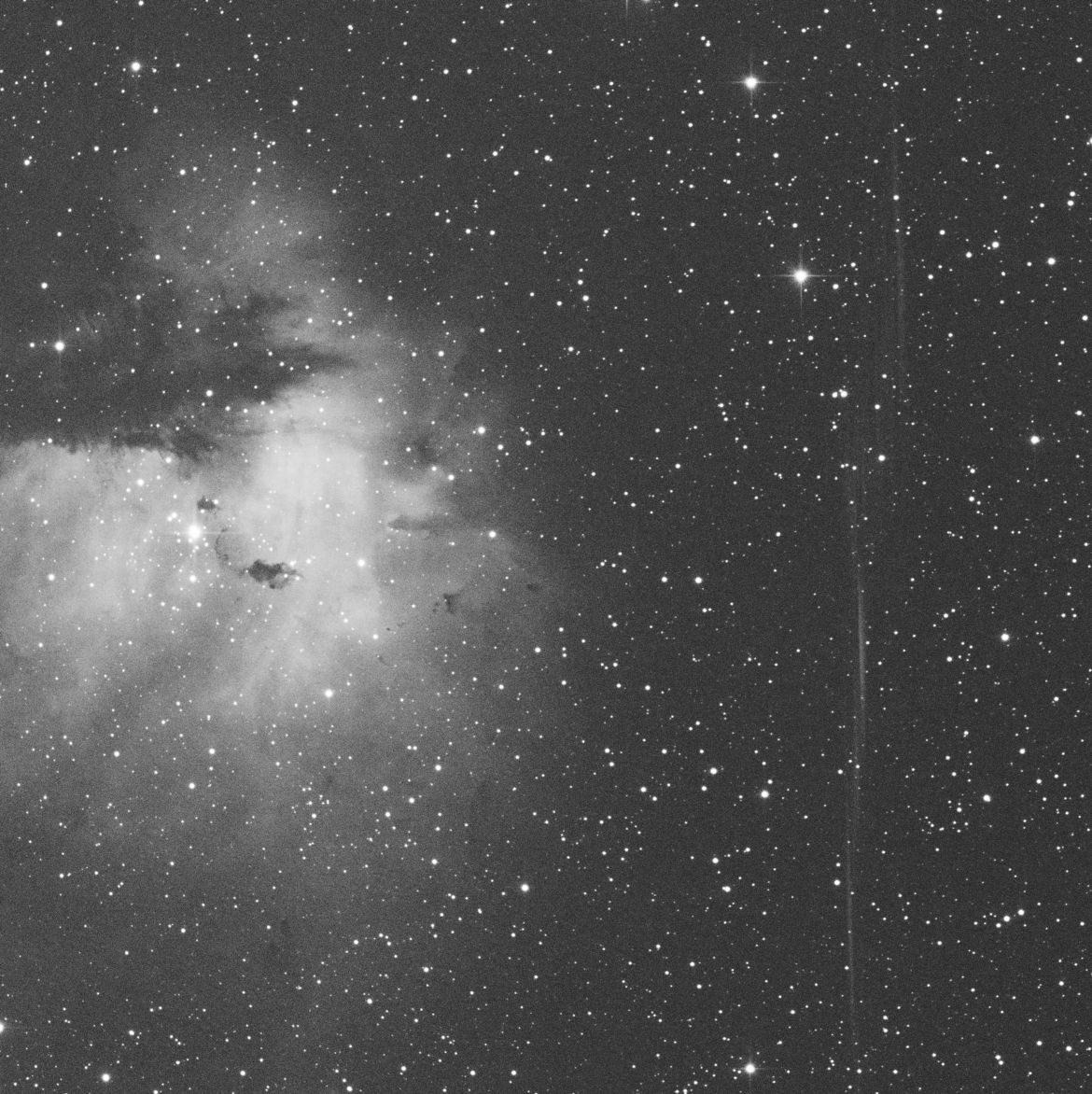 Satellites? Did you notice streaks in most of your light subs?

I had that problem recently shooting M42, with satellites in every frame.

It would have to be a two hour train of satellites and it does not appear in my Ha data.

So not sure it is satellites.

It looks unusual. That's for certain.  It's not something new but rather some artifiact.

My best guess would be it's a contrail from a Jet that's taking rather long to disipate and is being illuminated by light polution.

I've seen contrails like this in the past that take hours to break up, and seem to stay relatively fixed in spot (i.e. they drift a very small amout over several hours, start to diffuse more than anything).

If it was a contrail the air would have had to been quite steady that evening.

I wouldn't think it would be a reflection if it moves with dithering (also it seems too diffuce for that) but I suppose that's a possibility.

Does it appear in the very first sub?

If not, is there a sub that shows a plane going through the frame in this spot?

How different does the artifact look from the first to the last sub it appears.

If it appears more and more diffuse then it would be something in the atmosphere.

It doesn't look like satellites. Is the location constant in each frame? It looks a lot like vapor trails or chemical releases high high in the atmosphere. It looks like it could very well be associated with satellites since it appears to be roughly N-S orientation. Maybe high rocket burn. But if so, I would expect some movement frame to frame. A steady orientation in the sky is not what I would expect.

It looks close between first and last.

My friend has very similar looking streaks and he understands it to be geosynchronous satellites.

The fact that it appears only in your OIII data seems odd to me. Unless there was a large time gap between the OIII data and both the Ha and SII data. Do the "streaks" (for lack of a more descriptive word) seem to drift to either side between the 1st and last OIII subs? If so, perhaps a large time-gap between the various filters might explain why it only shows in the OIII.

Is the complete set of "streaks" present in all subs, as far as you can tell?

The Ha and Oiii were taken back-to-back.

One possibility for it not being in the Ha: Satellites reflect sunlight, the moon reflects sunlight, and everyone says Oiii is more sensitive to moonlight than Ha filters.  Maybe it is a sensitivity issue.

I think the key to understanding what this may be is to look and see how many frames are affected. If it is really in all of the frames and appears to move or change only slightly between each frame (from start to finish) then I'd think that it must be a reflection or something in the optical path (although it doesn't look like any reflection that I've gotten).

Also, are these calibrated frames? If so maybe there is something wrong with your calibration files.

I was looking at some widefield shots of 281 and Cassioeia, and the orientation does appear to be in the N-S direction.

The lines are in all the uncalibrated Oiii shots -- first to last.

It appears to move with the dither.

I looked at the first and last shot -- though faint in individual 3min subs, the lines seem to stay in the same spot relative to the stars.

I assume you will get more data, like another night or two, on the same target, at the same time AND different time of the night; and, a few OIII subs of a different DSO.

Perhaps you will find something obvious, like a downy bird feather that momentarily settled on some exposed optical surface (happened to me).

Also, to eliminate possible sources, it might be necessary to determine if moonlight or sunlight could even reach a low- or medium-altitude satellite at that time on that particular night, since we are fast approaching a new moon, and ole Luna should be on the opposite side of Terra from the "satellites."

Geosynchronous satellites are in orbit over the equator and would not be seen at that high a declination.  It appears to be oriented N/S as well.

the photo is still pretty.

the photo is still pretty.

I am happy with the final product.

I don't see any lines in the final image:

Nice final image !! And, no lines!

Geosynchronous satellites are in orbit over the equator and would not be seen at that high a declination.  It appears to be oriented N/S as well.

Geosynchronous satellites can go over the pole. There is a difference between geosynchronous and geostationary. That said, because of the rotation of the earth, they would appear in images to go at an inclination to the N-S line. Whatever is in this image is really pretty close to N-S, so not geosynchronous. Also in practice, such a satellite would not be very useful. There are near variations of this that actually are useful.