I still haven't figured out how to focus the finder scope on my Tasco 17TR. I can unscrew the objective and move it an inch away from the tube and it comes into focus but there seems to be no way to focus it and keep it on the OTA.

Edited to add that I just found one for sale at Astromart and can see how it's done.

I took mine completely apart and didn't see that draw tube. I'll have to look again at it but it's not here with me right now.

So far my viewing has been marginal with it, but I need to spend more time with it before passing judgement.

...interesting - I posted early in this thread, but a quick re-read has me thinking about another Oz fella (Bill) who added to Masvingo's excellent thread with his own total strip-down & rebuild of a Royal Astro 76mm refractor last year: I posted recently that he was selling/sold it...but more to the point he made some slight modifications, but could not get rid of all the backlash in the mount, despite a lot of work.

I know what backlash is but some people might also use the term "sloppiness" or "wonky on the mount" or even "sits on an inadequate mount" for the same problem..?!?

All this to say that after re-posting some analogous commentary in Bowlerhat's little Vixen thread just then, is it possible that despite folks' perhaps slightly rosy-eyed appraisals of these classic refractors (& being a bit of a stirrer & Devil's Advocate

) maybe many/most of them really did not have their mounts engineered sufficiently for what are quite large/heavy ota's..?

My Unitron 142 and Pentax 85 have mounts that carry them very well. They are a joy to use, and it's possible to manually mimic a drive by keeping a hand on the RA knob and turning it slowly. No vibration results from that.

Of the 3" class scopes in the student loaner set, the HOC ATCO 1254, AOC Mayflower 816, and Meade 300 are hampered by their mounts. The Tasco 10TE and 10TE5 are a bit better. Only the Unitron 140 works really well. None of them are terrible, but after using a good, solid mount, their weaknesses are obvious. The ATCO is actually fairly stable, but the OTA is so long that it's hard to reach the axis locks while trying to hold an object in the view. When it's not on loan, I like to put it on the 142 mount, since it gives a better view than the Unitron OTA. Actually, the 80mm HOC Selsi 247 does pretty well on its mount, but it's an f11.

There are clearly some that are not encumbered by their mounts Chip...but I guess it seems that for quite a few, my musings might be on or near the money...

Pentax, Vixen, Unitron, Nikon seem to be the ones where the mounts are consistently beefy enough.

All the "lower" brands, there's a lot of variation.

I used to own a 80/1200 with a Dai-Ichi Kogaku mount that was really very beefy:

Sadly, the original tripod was lost but I think it was a flimsy aluminum affair anyway that did not match the solidity of the mount. The mount itself was, IMO, rather more stable than a Vixen Super Polaris. It had some cheap details like the setting circles were printed on some sort of cheap adhesive strips but overall it was very good.

I sold that for a Vixen 90M but now I'm looking back to getting another 80/1200. The 90/1000 is just too short / has too much false color for my kind of observation (mainly the Moon and planets) and my C5 clearly outperforms it there. The 80/1200 will hopefully give me more of the "classic long refractor" experience. The 90M also has an aluminum tripod, I absolutely do prefer the wooden ones. 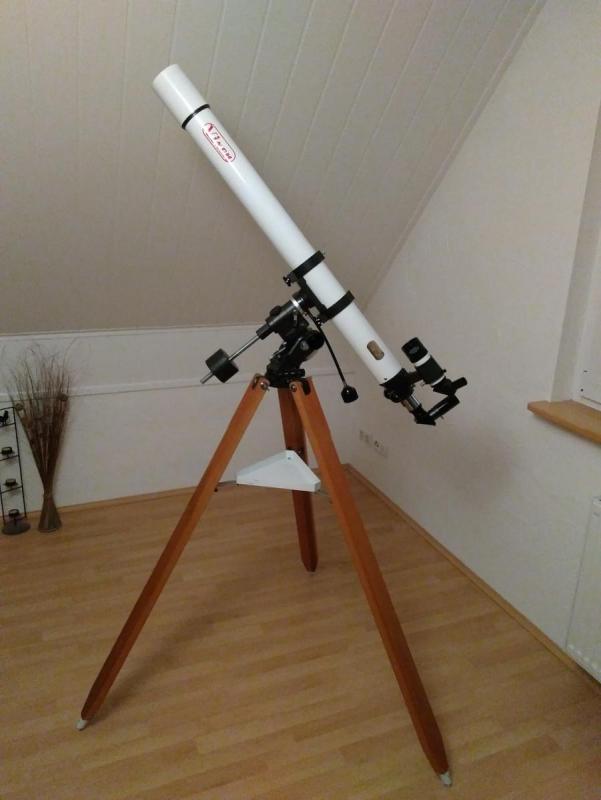 Here is my Vixen 80L with a 50mm finder. The NP mount is heavy and very solid. It does wiggle a bit while focusing, but it is not bad. The optics are sharp. On steady nights I can go to 240x with a Vixen LV eyepiece. I believe it could handle more power. The color correction is very good. At 170x Venus is still white with a minimum of blue/purple visible. At 240x Venus is a little yellow and the blue fringing is noticable but not bad at all. The build quality is very good. The dew shield is a bit too short, so I add a tube extension when dew is expected.

"Pentax, Vixen, Unitron, Nikon seem to be the ones where the mounts are consistently beefy enough.

All the "lower" brands, there's a lot of variation.

I would add Goto to the list of "beefy enough".  Here is my nomination for one of the best balanced 80/1000 systems I have ever used.  I know this thread is about F/15's but I hope you let me slide by on this one.  The lens is a 80mm F/12.5,  the mount was designed as a astrophotography system in the late 70's.  The mount itself was available with 80mm refractors....F8.25,  F12.5,  F/15 or a 125mm F/8 reflector.  I believe the reason not many made it across the big pond is once owned they are seldom sold and when they do come up for sale it is almost exclusively in the Japanese market.  The mount is over engineered in my opinion and tracking is spot on.  I am looking for the F/15 model to mount on this Mark-X.

The only remaining long 3” refractor from my collection resides at my daughter’s house,- a Sears 6344 76mm x 1200, converted over to use 1.25” eyepieces exclusively. It was made by SYW and has excellent optics. As to myself, also shown below is my current and favorite 3” refractor; by far, the best I have ever owned.