Skywatcher 120ED, 6 Years later, what upgrades have you added?

This year will be 6 years since I bought my SW-120ED. Bought it used from a photographer who thought it would make a nice 900mm Lens.

It was a great price back then, under $K for a pristine scope, most parts never opened.

Initially there was an active thread called, Pimping out your Skywatcher 120ED.  That was started 6 years ago. It was a hot topic for a long long time. Probably many people have bought and sold there scopes since then. I never sold mine. It was the Goldie Locks scope for me, not to big, not too small, not too heavy, not too expensive...

6 years later, its still my favorite GoTo midsize refractor. Initially it was suppose to be an interim scope till I found a pristine used TSA-120. That never happened. The few i was interested in were all blemished, nothing I'd wanna own wearing the Takahashi name.

Before my scope was delivered to me, I had already purchased a replacement focuser, the William Optics 2" DDG Crayford Focuser for Synta Refractors - Dual Speed. This is a nice load bearing crayford focuser that has always been pristine, and has never needed an adjustment. It was obviously designed to match these Skywatcher refractors since the colors matched perfectly.

Aside from the focuser, I just ordered a set of 116mm machined tube rings:

Also, I added a Laser and Telrad. Most recently, I added StarSense to my OTA along with a new AVX mount.

Up to this point, I still cant see the scope being replaced. It seems like a great old guy scope also, when my G11 and 152ED are too heavy, so I better keep it since my back is already reminding me about the future.

So getting ready for the new 2020 observing season that will be starting soon, I did my yearly past wax on the OTA last night, and am ready for another awesome year of astronomy.

I'm happy to see the SW-120ED, now the EvoStar is still selling strong.

So what upgrades have you done to your SW-120ED, Anything major like cut the tube down a few inches for a binoviewer? A new Paint job, feathertouch focuser, flocking the dew shield maybe?  How long have you had yours? Any upgrades in your future even if its too replace the scope with something different?

Black Moonlite focuser on my 120 Equinox.

Red Moonlite CF focuser to replace a William Optics unit that came with the scope (it was bought pre-owned). Otherwise the scope is stock.

I've had mine about 6 or 7 years now. Its one of the old gold tube ones. Excellent optics even when compared with my more recent Tak and LZOS/ TMB purchases.

I use an Astrozap dew shield with it from time to time.

Just got mine late last year and have not gotten it out yet. I did add a Feathertouch 2025 focuser and TS tube rings on an ADM dovetail, also have a Telrad base to install. We are having a spell of bitterly cold nights right now but I am looking forward to taking her for a spin soon

I got mine a year ago, along with an AVX, to upgrade from my Celestron Omni 102 XLT on a CG-4. Don't get me wrong... The 102 is a good rig, and I have no intention of getting rid of it, but my old eyes needed a bit more aperture, and the SW 120ED checked a lot of boxes. Right now, the 102 is slated to become my solar rig, but that is another story.

I had a GSO Linear Bearing 2" focuser on the Omni, and so I swapped focusers for the 360 rotatable feature to be on the 120. And while the GSO is a good focuser, I am considering a MoonLite replacement.

Overall, I love this scope. It has provided me a bit better reach than the 102, allowing me to split some tighter doubles, along with great views of Luna, Jupiter, and Saturn, and with no detectable CA. My plan is that someday, in the far distant future, my family will find me slumped over the eyepiece, a smile on my face, and the scope happily tracking the last object I was viewing.

The stock focuser on mine has been fine.  All I’ve added is a 2” compression ring for the diagonal.  I had it on my AVX for awhile but now it’s back on the LX70, which seems like a good match (that mount is shared by an AT102ED, but most of the time it’s the 120ED).  The optical performance of the SW120ED for the price is outstanding, but the weight is also a big asset.

Replaced the stock focuser, deleted the finderscope and just use a GLP with it. That's about it for mine.

Borrowed a buddy’s gold tube version many times through the years. Loved viewing with it. Never quite had the funds timed right to snatch up a used one, until last year. Mine differs from stock with a GSO focuser with two finder mounts and 14” ADM dovetail bar. I like options when working with a scope. If I want to slide or rotate the tube I can. If I want to rotate the focuser or slide forward or back on the mount I can. I also have focus tube extensions and a straight through finder for no diagonal viewing. Being the second owner I had the glass professionally cleaned and checked the collimation. Great scope even stock.

The best thing i bought for my SW120 is the TV 6-3 Nagler Zoom, incredible eyepiece and incredible telescope! I've also bought a 30mm Pentax XW for it, but the clouds are fighting me and winning! So my thoughts... pimp the scope with a nice new eyepiece!

Did update focuser to 2.5" FT, but even little better would have been the ML 2.5" for fine focus, I currently use with the ED100. Added some automotive tape for the due shield and use tube rings from the AT115 to match color theme.

Bought mine a year ago, a tremendous value, and have no need to change a thing about it.

Focusers seem to me the most common upgrade. A high quality focuser probably would have added a few hundred more dollars to the cost of the scope.

They all look great!!

I bought mine a couple of months ago. I passed a fine sandpaper through the focuser chamfer, and later readjusted it. For strictly visual use I consider it more than enough

The biggest Upgrade my made to my 120ED was really purchasing an AVX GoTo mount for it. Now, with my poor back yard seeing conditions, I can still get out and use my scope and again find some of the objects I just never could. Mostly Double stars have opened up to me, since even if I star hopped to them, I never knew if they were really there or not.
The AVX tripod is way too short, at least to me, using my SW-120ED. So I now use my Losmandy G11 Tripod with my AVX Equatorial head and it gets my scope up plenty high to be more comfortable and not having to sit in front of the scope all the time.
Here is a late night photo with the whole scope, mount, tripod all set up with starsense mounted under the OTA with a green laser on top.

I bought mine almost 8 years ago. I added the same WO focuser, then I had the tube powdercoated to match. I then machined a retractable dew shield in my garage, and had the new ring anodized to match the WO gold color. I think it came out great! 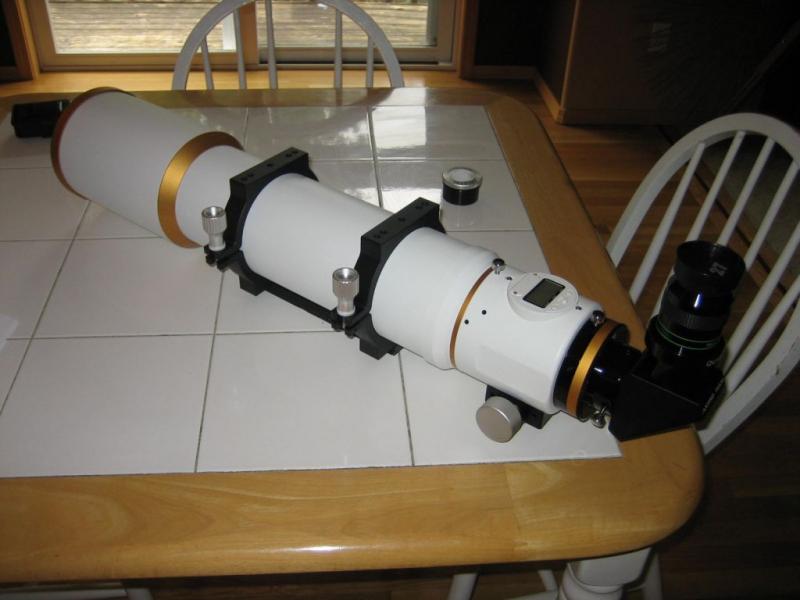 All kidding aside, these are just fantastic scopes. I consider mine grab and go, even though it's on an EQ mount with a surveyors tripod.

I believe you can still get the white-tubed TS version with retractable dew sheild from TS in Europe.

I bought mine almost 8 years ago. I added the same WO focuser, then I had the tube powdercoated to match. I then machined a retractable dew shield in my garage, and had the new ring anodized to match the WO gold color. I think it came out great!

Really had me doing a double-take there!

Personally, I will hit 5 years in March. Best addition was the Moonlite focuser and a nice alt-az mount to mount it on. No plans to part with mine.

Really had me doing a double-take there!

I have a 120ED Equinox since february 2014. Like the scope a lot for visual. No need for upgrades so far. But now I am starting to long for a clicklock vb. Sadly I dont`t think they fit the Equinox focuser......

I thought there was a Clicklock that fit... search the "pimping your 120" thread

I know how you feel. I could not do that, and sold other stuff instead when I got the TSA-120. So Tak is home scope, S-W can go out & about if I wish.

They look awesome. I cant wait for better weather now.

They look awesome. I cant wait for better weather now.

What a nice 6th anniversary present for your baby!

Bought mine a year ago, a tremendous value, and have no need to change a thing about it.

I think this is the first picture I've taken of it: 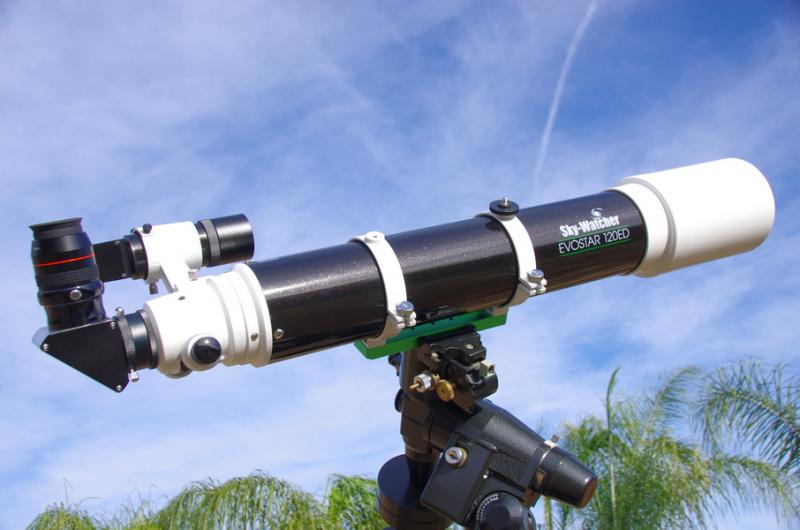