Mod 3 Purchasing Decision - Left or Right, Which is Best for You!

Having just had a PM with another CN member who is getting ready to buy a Mod 3, the question that came up was should he get a left hand or right hand pod.  That is a great question, and I have an opinion on darn near everything, so don't be surprised that I have an opinion on this! So, I thought I would share that with prospective buyers because you get to choose!  It is oddly not intuitive.

The gain controls are positioned so that on the Mod 3 Left pod (as Adam Baker calls these and since he makes them, I am going to use his terminology here) is below and left of the objective on the left pod so that it can be accessed easily by the left hand, and obviously on the right unit, it is below and right of the objective so that both knobs face outward and are low.  So that makes it seem like you would want a left hand module if you are left handed and a right hand module if you are right handed.

Well, maybe, but I think it depends more on which hand you think you will hold the unit in to observe.

I am right handed, and I prefer to use my left hand when holding a monocular. The Mod 3 has a battery box that I tend position into my palm, and I wrap my fingers around this to hold the monocular.  Now the issue is that when I do this, the gain control is facing almost straight up!  This is not really the best for ergonomics.  Now when I bought this, I ordered a right hand unit for no particular reason because mostly it was intended that this would be used in a telescope. When I occasionally use an SLR lens with it though, I think I should have gotten a left hand unit. With a left side pod, the gain would be placed more in the position indicated by this picture. 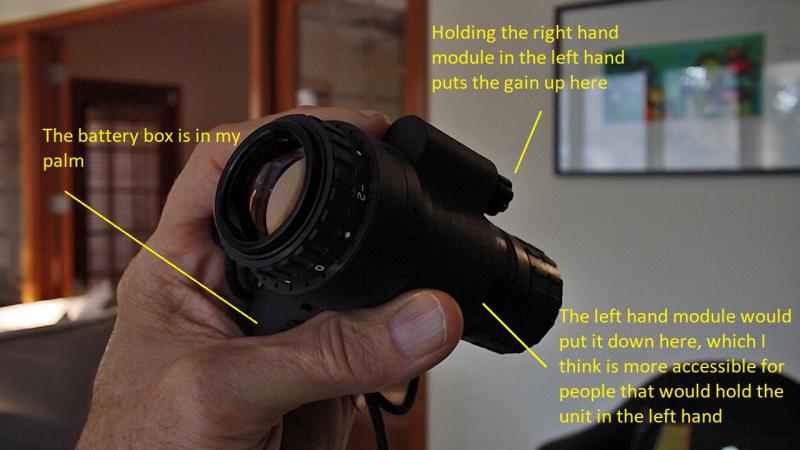 So, I make no specific recommendation, but this post was intended to let you better visualize the ergonomic of the left and right pods when held by the observer.

Hope someone finds this useful when they order their Mod 3!

I would think it would be more appropriate to first decide which eye you are going to use and then decide on the "handedness" based on which hand you normally use with that eye. Now I am a cross eye dominant lefty (80% of lefties) so my right eye is dominant. In spite of being left-handed when using my right eye I normally hold something in my right hand. So I would go from there,  based on which unit put my right hand in the best position.

Lets say that I only have funds now to purchase a single unit, L or R, but intend to acquire another to make up a binocular in the future.   So at a later time, and if I were looking on the previously owned market, which side would I most likely find?

Lets say that I only have funds now to purchase a single unit, L or R, but intend to acquire another to make up a binocular in the future.   So at a later time, and if I were looking on the previously owned market, which side would I most likely find?

Better plan is to buy the side that you expect to use as a monocular loaded with a tube and optics.  AND buy the other side housing only (no tube or optics).

Later, you can buy your 2nd tube, the optics for the 2nd housing, and the bridge to complete your dual tube system.

This post helped me decide that I probably wanted a left handed device, so that the gain knob would be by my thumb. But, having just received my MOD3, and not having the option to choose the housing (was the MOD3 Astro from UNV, no selection for left/right), it seems I got a left handed housing, with the gain knob at the bottom when held with the left hand. But actually prefer holding with my right hand with the gain knob at the top, operated by my ring finger. I can get a much better grip on the unit this way. With the gain knob accessible to the thumb in my left hand, I have to stretch my thumb to move the knob, and it forces me to adjust my grip to a much less secure grip. My hands are only average sized but they feel a bit small for this purpose. So, honestly, I think I prefer the ring finger gain control with my right hand. My gain knob is pretty stiff and it's harder to turn with anything but my other hand, so I've just been doing that so far.

Regardless, I appreciate the thought Eddgie! Definitely something to consider when dropping this amount of cash on an item.

Spent a lot of time trying to decide before getting mine but when it came time to finally acquire one I didn't get a choice ... turns out it doesn’t appear to make any difference since I just hold the device in such a manner that I can turn the gain knob with my right hand ...

So, are you going to return your MOD3 or what?