In the oughts I had a really nice CCD camera from QSI with a  KAF-3200ME sensor - it performed beautifully with a set of Astrodon filters even from my Bortle 7+ site. I sold most of my rig in the late oughts and moved away from this sport.

So, we are now in the twenties and I am back to the sport, hobbled a bit ( a lot) with a smaller wallet but still with dreams of capturing something no else has (think the 'Soap Bubble') and my list started to include a KAF 16803 CCD camera with it monstrous 64 Megapixel sensor. But -- by the time I can save up the money for a $12,000+ camera there may not be any CCD cameras on the market.

Kodak will be closing its CCD plant mid year and ON Semi will stop production in a couple of months. So, that leaves CMOS. In 2008, I tried a CMOS guiding camera from Fishcamp. It was so noisy I could not make out a star from a white blob on the screen - no matter the gain setting. I sent the camera back and they were very gracious in accepting the return.

I then bought SBIG ST-402 and off to the races I went. Neither the QSI or the SBIG ever created any type of image capture problem. CMOS did and now, a decade later I am left with a very bad taste in my mouth regarding CMOS.

Yes, I went out and bought a NIKON D5300 based upon the comments by nearly everyone who commented on the D5300 and YES, I know the camera has CMOS chip, from Sony.

To help me understand the recent (meaning the last 5 or 6 years) affinity for using CMOS has anyone here, or elsewhere done a side by side comparison of comparably sized CCD sensor versus a CMOS sensor. A really great comparison would be to compare a KAF 16803 4k x 4k, 9mm pixel (as in the SBIG STX 16803) with the  GPixel GSense4040 4k x 4k with a 9mm pixel size (as in the FLI KL4040).

These are not cheap cameras but I can dream...

Thank you for reading.

I'll be very interested to hear from others on your post too.  I currently am imaging with a STF-8300 and a mod Canon 6D.  I have friends that are using high end cameras with the 16803 chips and yet another group of friends that are using the ZWO ASI line of cameras (1600M and the likes).  One of the things that I notice is the ones using these high end CCD chips have images with much better star color then all the rest.  You really see very little over saturated stars (white stars) mainly a result of the 100K e well depth/pixel, along with the the high QE along a broader spectral line.  To my knowledge CMOS still needs help in this area.  To the credit of CMOS, the newer cameras have done a great job in tackling the noise issue.  Please correct me if I am wrong, but it seems that price and ease of entry into the imaging hobby is the main driver for the push towards CMOS.  What I hope, is that manufactures are getting ready to launch a new generation of CMOS (or CMOS processor) that will compare or beat out the best of the current CCD's and at a lower price.

Don't write off CMOS so easily.

Here is a Soap Bubble that I took with a $1200 CMOS camera (an ASI1600MM-cool).  It's on my list to go back and reprocess, because there was a problem in calibration that I didn't account for properly.  The actual data has quite a bit less noise than what's represented here:

The next generation of CMOS cameras look to be a big step up from the one I used here.

This issue (CCD versus CMOS) has been debated before and IMO it can be boiled down to a few key points.

1.) CCDs generally have larger pixels and higher full well depths using 16-bit ADCs but with lower quantum efficiencies. So, CCDs MAY be less subject to over saturation.

3.) There are other differences with some being equally as significant, but neither technology is "perfect" and each has its own set of problems.

Furthermore, there are future technologies that may have "well depths" measured in just a few photons/electrons per image site and that will require read-out rates ("exposures") in the millisecond range. Interestingly enough, one application for such sensors may be in low-light astrophotography.

All this said, it's unlikely that you could produce an image as shown below using an uncooled, one-shot-color CCD on an 80mm refractor using a series of five second exposures (image taken with a QHY5III-178C, a $300 CMOS camera with 2.4um pixels). So, YMMV.

Wade and James - nice images. Wade, I imaged the Soap Bubble a month after its discovery with a QSI632. I processed in likely in MaxIM and it did not have the red cast in your image. I have lost all of my previous work but the image I posted  https://www.cloudyni...i/#entry9906576 is very close to what I imaged.

One of the things that impresses me about both the KAF 16803 and GPixel GSense4040 is the 9mm pixel size. A larger pixel will always gather up more photons than a smaller chip. I would much rather have a larger pixel size in the same sized sensor than not.

I do not know how to compare these well depth specifications:

I can't offer a comparison, since I stopped using CCD around 10 years ago...

Noise levels in CMOS now are generally lower than CCD.  Both read noise and dark current are lower.

Full well capacity is also lower, so the imaging strategy is a little different, but that's not a big deal.

FWIW, I put my Apogee U16M with that giant KAF 16803 up on the CN classifieds for $5,500, and I could consider bargaining down a bit from there.  It is a top of the line Class 1 sensor.  PM me if interested.

The runs to CMOS cameras has its benefits for us CCD users.  Price plunge for the "old cameras".  I just picked up a lightly used Apogee F16M 16803 camera with filter wheel that was 85% off of the MSRP from a company.  The camera and filter wheel work great and this is one of the images I took below:  2 hours of Ha 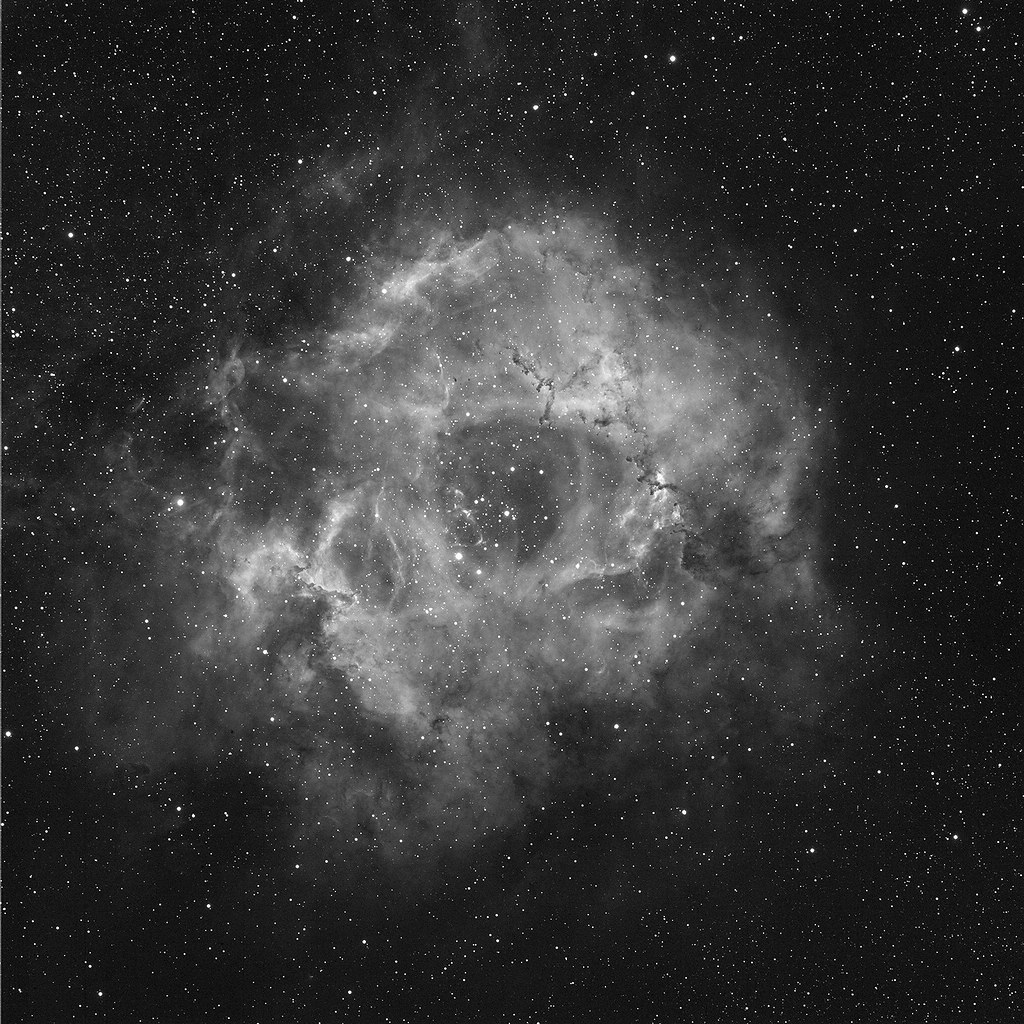 I'm doing this because the QHY600M (or the ZWO version - it's all about the IMX455 Sony Chip) beats the pants off of the 16803 in every category I care about, except the chip size.  But the chip size is close.  And with a slightly shorter FL, the FOV will be better than the 16803.

Pretty much every old complaint about the CMOS camera goes away with this chip.  I have shot 20 minute darks that are MUCH flatter and less noisy than my 16803.  And the resolution will be much improved as the smaller CMOS pixels are a better fit to my seeing.

So I  celebrate the new, better, cheaper cameras rather than rue the loss of the CCD options.

This thread kind of reminds me of when I read about the discontinuance of Tech Pan 2415 in Sky & Telescope way back when. Hypersensitized, that was my "go to" film for DSO's (and a lot of other people too!). Also at that time, I had both the 5.5" and 8" Celestron Schmidt cameras.  After I used up the last of my 2415, I sold both cameras.  Then it was on to digital imaging using a SBIG ST-8XME.  As much as I hate change, that revolutionized imaging DSO's through my C11.  What I thought was good DSO images using 2415 paled in comparison to the digital images.  I did lose the ability to do wide field imaging with the equipment I had.  To this day, I still think those Schmidt cameras with hypered 2415 film was an inexpensive way to produce superb wide field images.  Pinpoint stars all across the 35mm film chip.

I guess the point of this rambling is that this hobby has a long history of photon collecting media changes.  Somehow we all (I think) adjust.  Maybe not happy about it but we do.  And we certainly are not going "backwards" with imaging.  I look at some of the premier images in old S &T magazines and today, those are barely "routine" images.  There are always pluses and minuses with change.

The nice thing about digital, unlike film, is that even though CCD chips will be discontinued, I still get to use my ST-8XME!

Wade, I imaged the Soap Bubble a month after its discovery with a QSI632. I processed in likely in MaxIM and it did not have the red cast in your image.

I'm not sure what you mean by a red cast.

The Soap Bubble is embedded in a large field of Ha clouds.  In the image you referenced, it looks like the Ha clouds have been suppressed in processing.  I chose to show it.  Also, the OIII in the image that you referenced is much bluer than the actual OIII color, which is very close to teal.

In any case, the colors in my image are 100% my choices in processing and 0% issues from the camera.

Reference Dwight's H-alpha image of the Rosette that was done in two hours with an Apogee F16M 16803 CCD and a TEC140. By something of a coincidence the last image I completed with my ASI183MM CMOS camera and a Tele Vue NP127is was also an H-alpha shot of the Rosette (shown below, with a similar exposure time).

The ASI183MM is a smaller sensor with 2.4um pixels and thus I needed to do a two panel mosaic to cover nearly the same field (just over 2 hours for each panel). However, I ended up with an approximately 31 megapixel image at 0.94 arc seconds per pixel versus the 16.8 megapixels at 1.9 arc seconds per pixel on the Apogee.

That said, given the similar scopes and exposures it's interesting to see the likeness between the two images.