Finally had a chance to take my 25" out to our dark site last night. Conditions were near perfect for the first part of the night and deteriorated somewhat after midnight.

Some of you folks can describe what you saw to such perfection I don't even need to bother observing said DSO! I can picture it in all its glory.  Myself, on the other hand, can look at a DSO and see all kinds of detail but when I go to write it down I develop a blank stare and drool falls from the corner of my lips! The good part is you will have to go and observe the stuff I write about just to see what the heck I am talking about.

As is usual for me I spent the first part of the evening visiting my favorite DSO's. We had a group of new folks out to the site so I invited them to have a look. I showed them M42 and M1. As always M42 was stunning. To much detail to even try and write about. Thinking about big aperture? One look at M42 through the 25" will convert you in a heartbeat.

M1 looked ghostly as it always does. I let them look and then put in my OIII and let them take another look. The OIII turns the featureless cloud into what looks like a road map. Tendrils and filaments crisscross the face of the nebula. 150x seemed to be the sweet spot.

After they went back to their scopes I got down to my list. Here is what I looked at in no particular order:

FJJ-V: A globular cluster in NGC185. Larry Mitchell was observing this with his 20" f/5 and called me over to take a look to see if could see the mag 16.7 globular. Like Larry I could just make it out but could not hold it with direct vision. I estimated I could see it about 5 percent of the time. Larry agreed. Out of curiosity I found it with 25" and could hold it quite a bit easier then I could in the 20". Again Larry agreed. By this time a few folks came over to look and, after showing them the finder chart, they to were able to spot the globular. And one of the observers was 79 years old! Seeing a 17th mag DSO. Don't let age drag you down...

Oh, the glob was just a stellar smudge but still a pretty cool observation. It took around 600x to see it. 700x was the better power.

IC10: IC10 in Cass is a dwarf galaxy that may belong to the milky way or could be part of M31. I think the jury is still out on that one. Pretty easy to find with a big dipper look a like in the same FOV one can use as a pointer. Looks like a hazy nebula but it sparkles as it is made up of stars instead of gas. We use the word "stellaring" to describe the effect. We could also see it in a 14" scope. Just barely though.

IC443:  Supernova remnant in Gemini. A friend of mine was imaging this nebula and wanted to see if he could see it visually. Sure I said. With an OIII it showed as a nice arc of nebula similar to the Crescent Nebula. But not as bright. Nearly invisible without the OIII.

IC 466: Small nebula in Mon, near 2346. Not much detail but I could see a small dark patch inside the nebula. Similar to the Keyhole Nebula in Orion.

I tried for a few of the Abell planetaries that are on the same Interstellarium page as 2346 and 466 but could not make them out. Transparency had started to crash around this time. I did look at quite a few open clusters in the area but they were all boring and not worth mentioning.

NGC 2440: Last time I looked at this planetary was with my c-8. A zillion years ago. In the 25" at 700x its a train wreck! What a mess. It took me a little while to sort out what I was seeing so here goes: Bright central core with an odd "C" shaped inner ring. Mottling could be seen inside the C ring. At first I though it was a bi-polar planetary but closer inspection showed 3 lobes. Two brighter and one fainter (and smaller). I caught a hint of a forth lobe but couldn't be sure. Looks to me like two planetaries crashed into one another! This one is going to the top of my list for the next opportunity on the 82".

Thor's Helmet: One of my favorite DSO's. Spectacular with my 20 Nag and OIII filter.

I once again looked at quite a few open cluster in the area with one stand out. NGC 2360. Great cluster resembling a less busy version of NGC 7789. Lots of interesting looking "straight lines" of stars crisscrossing  the cluster.

Hubble's Variable Nebula: Always a show stopper. Wonderful. Showed it at 700x to a guy that brought out his 8". Aperture fever has begun!

Horse-head: Not easy but I could see it. 35mm and a H-Beta. Others tried but could not see it. It took rocking the scope a little to make it move. The ones that did not see it could not grasp the moving part. I think they were afraid to touch the scope. Maybe next time.

Flame Nebula: Wonderful. Looked like a dark tree with a glow around the tree shape. Everyone saw this one!

Overall a great night. By 3 am my primary finally dewed over so I called it a night. Slept in my trailer for a few hours and headed home about 11 this morning. Time to go to my real bed. Goodnight!

Best description of R-Leporis ever! You're a wordsmith after all.

Nice report, Keith.  We're been pretty much clouded out in northern California the past two months.

Here is Larry and all putting his 36" together to so he could clean the mirror. That's his 20" f/5 next to it! This was the same night as my observing report. 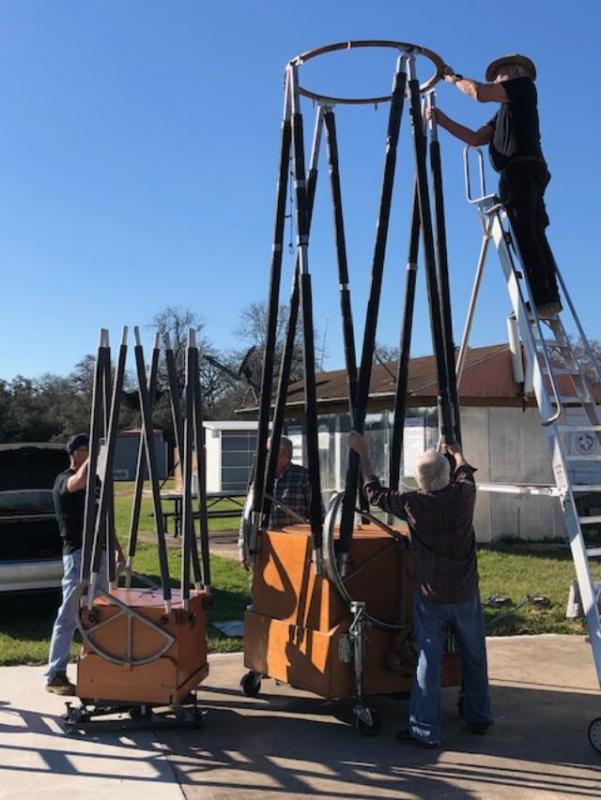 Nice report, Keith.  We're been pretty much clouded out in northern California the past two months.

The two stars making the triangle with V made detection much easier as I could use the stars as an anchor point for averted vision. Flitting back and forth to make it pop.