Telegizmos 365 Outdoor Telescope and Mount cover and my method of use.

At the time that I purchased this cover, I was the graveyard shift five days a week. Now I work longer shifts, but only three days per a week which has made it much easier for me to engage in this hobby. I really wanted to and still want to build an observatory, but someone kindly suggested the Telegizmos-365 cover and I was not disappointed.The person who recommended the cover did say something about rust on the tripod bolts, so I did not hesitate to get the tripod cover as well. Another countermeasure was the addition of a large vented canister of desiccant.

So far, I've only used it during the winter. At the start of each session, the polar alignment is in the ballpark but it always seems to benefit from doing it again with the help of SharpCap Pro. 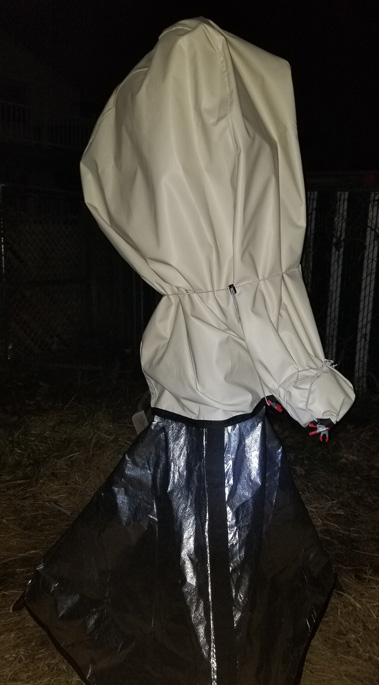 In addition to the cover TG365 cover, I purchased the tripod cover offered by the same manufacturer.

Interestingly, the silver on the top half is supposed to face inward, but while it faces outwardly on the bottom cover. The product comes with a page of thoughtfully written directions with some guidelines to ensure that the cover remains in good shape. 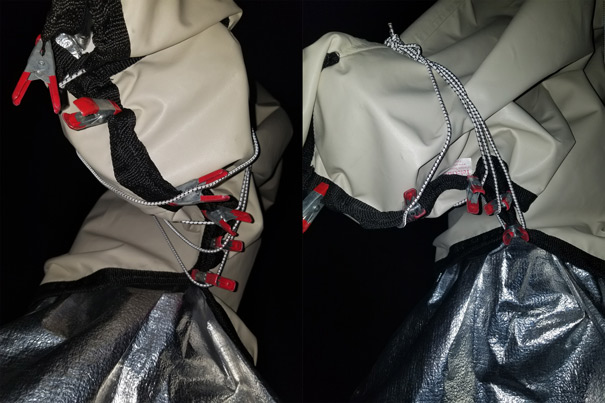 Included are a few of these clothes-pin/crock-clip thingies. They basically pinch the ends together to allow you to form a custom seal. Observe the visible opening revealing silver material on the front left. I probably could of left it but I curled it around attached a clip over there to seal that little opening right after taking this picture. 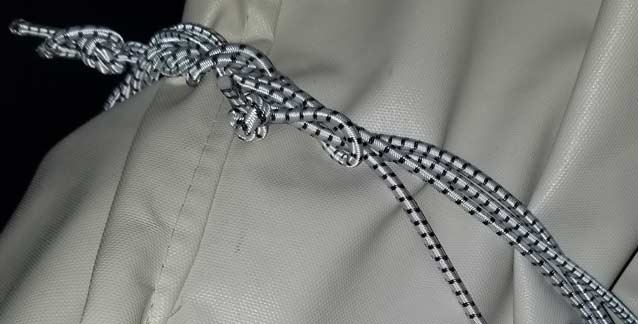 Both draw-string bungies have a knot installed at the end from the manufacturer. I leave these knots as they are and use them as anchors to keep the ends in place. Basically, the elasticity makes it tie itself.

Still not sure if this is the "right" way to do it but it keeps it tied down where it counts. 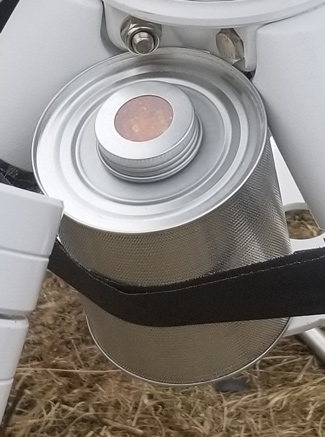 Prior to putting the covers on, I use a little bit of gaffers tape to hold a canister full of silica beads in place. It's the only reason that I use the accessory cover lately.

The orange-ey beads at the top turn blue if they absorb a lot of moisture and provided as a means of moisture detection.

Eventually, I would really like to have a motorized means to close a cover over the scope and mount. So that, if a 5% chance of rain becomes 100% when nobody is home, I could at least send a "close the door" command. Once I work out the fundamental, I can sort out ways to further automate it. Perhaps a sensor to detect rain or high RH (still shopping for a personal weather station).

The reason the 365 cover has the silver liner on the inside and the canvas on the outside is the canvas protects the silver liner. The liner acts an a radiant barrier. The tripod cover you have is our standard solar cover...same material as the inner liner on the 365's. The directions that came with your tripod cover specifically note you should not use the standard solar cover for long term outside storage...it is not designed to handle that level of long term outside usage. That's what the 365 Series covers are designed to do. Also, the instructions that came with your 365 cover specifically noted not to turn the cover inside out. The silver liner must be inside....just mentioning that for informational purposes. The canvas of the 365's is what provides the cover's ability to be left outside for years on end. So it would be a good idea not the use the tripod cover long term outside...it's not designed for that. As for your 365...use it outside as long as you want. We do make 365 Series tripod covers for long term outside storage.

Hope this information is helpful for you. And btw, thanks for your business!

Hi Bob! Just wanted to say "Thank you!" for providing such a fantastic product. Whenever the subject of all weather gear protection comes up on the forums, I give your product a plug... here is what I call my "Telegizmo Observatory"... 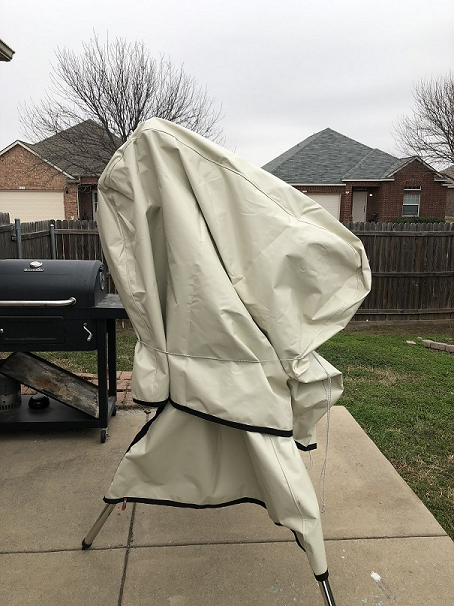 ^^^ Believe it or not, it has also withstood gale force winds, but that was not on purpose... I will normally take it all down if I know there will be high winds...

Again, great product, and thanks!

My first 365 cover, for my TEC 200ED.  It covers the entire scope, going on for over four years now..  It's doing great, however, the inner lining is getting a little frayed in a couple of spots near the cover's bottom from contact with some of the features on the scope as it is being removed and covered but I fixed them myself.  And I do wash it down once or twice a year to remove bird dung, pollen and some mold/algae.

I was so impressed with the original that I got two more, one which covers my AP 900 mount and a beast which covers my 11" F7 newt.  For the newt, I also slide longer standard covers over the front and back ends and secure them with bungee cords to completely seal up the OTA prior to sliding the "beast" over the whole assembly.  It's been out there now going on a couple of years, again with no issues.

You have a great product Bob.