I am helping the widow of a late astronomical friend to handle the inventory he left behind.

There are two pieces that I am not quite sure what they actually are: 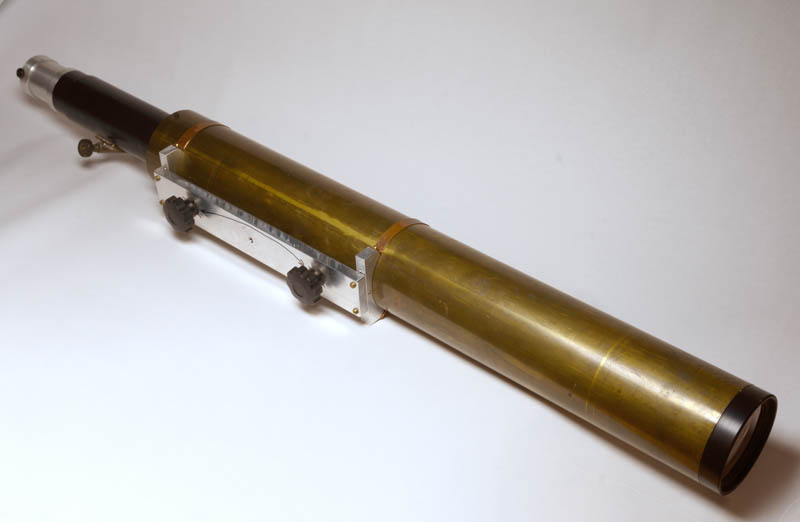 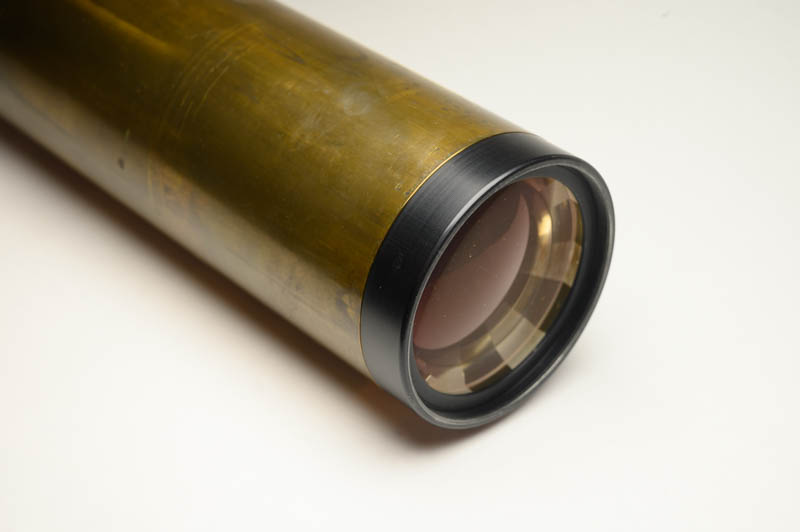 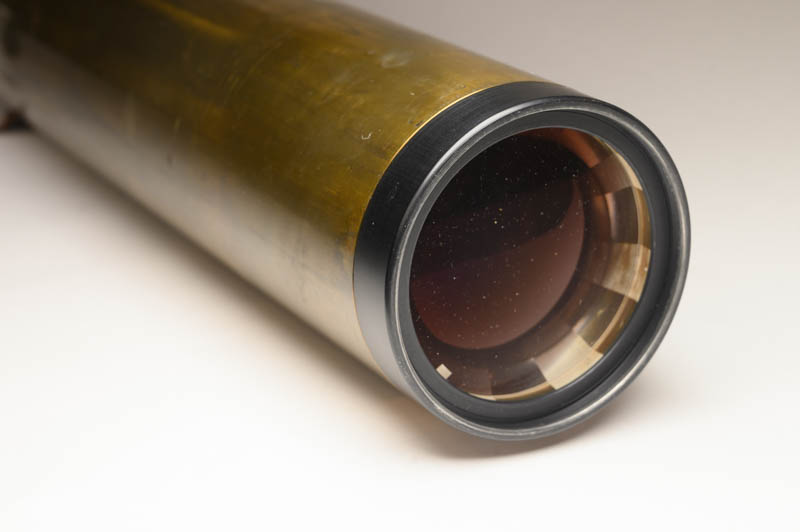 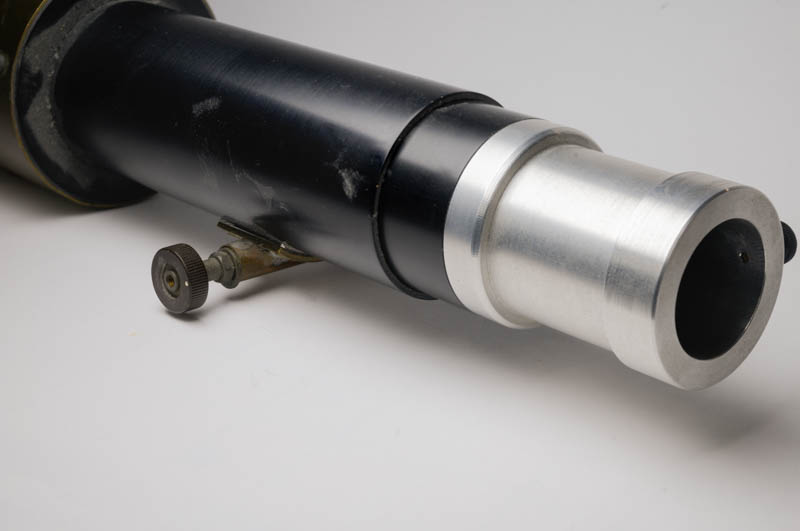 From what I know this is supposed to be a 63mm f=840 Zeiss telescope, there is no label on the lens cell though. The lens looks peculiar with the silvery stripes in the lens cell. I believe the tube must be a self-built piece. The front end is brass, the back seems to be a very well baffled piece of anodized aluminum. The thread at the back which connects the aluminum eyepiece holder has diameter of about 46,3mm. The focuser is most curious as it is very small, and has limited travel. 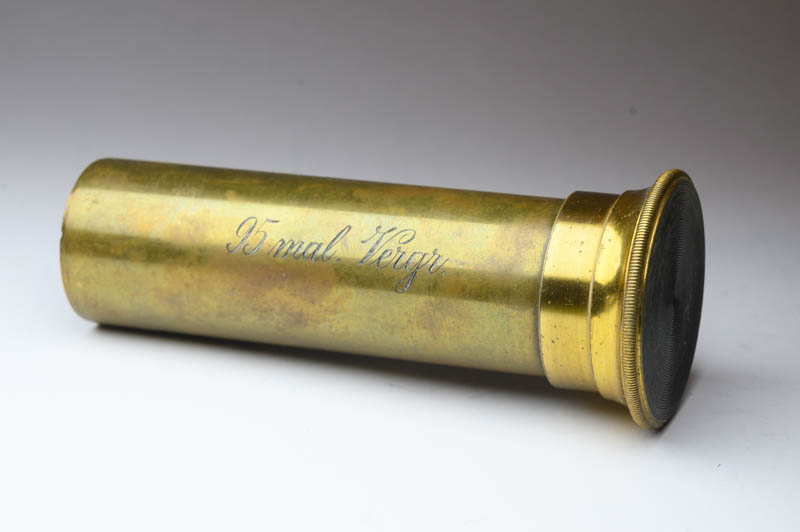 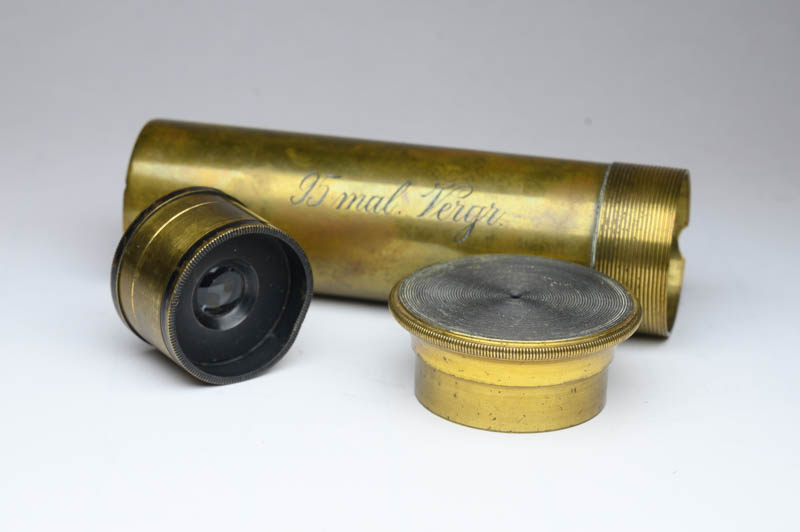 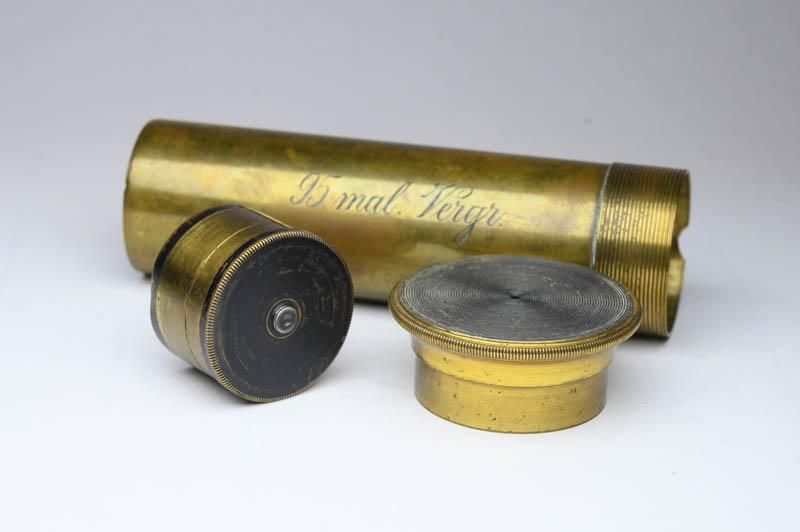 another mystery piece is this eyepiece, labeled "95 mal Vergr." (which means 95x magnification). I don't know whether this belongs to a telescope or a microscope. It seems to work in a very quick indoor test with a refractor, and the focul length is rather short. The exit pupil is very small, as is the the eye lens. Disassembled two optical elements can be seen. Does anybody recognize the design or manufacturer?

Any information is appreciated, also what they could be worth, if the widow decides to sell.

The late friend labeled the scope as AS 64(!) / 840, but yes, there are no markings whatsoever. As far as I know he got it from another optician.

From what I found on german astronomy websites, AS lenses were only coated sometimes in the sixties.

From another knowledgeable person I got the info, that the lenses were so large, that with a custom cell, 64mm would be possible, and that from the reflections it looks like it could be an AS lens.

Here is an image of the moon I took with a Nikon Z6, actually it is a stack of multiple images processed in Autostakkert and Photoshop, color saturation has been enhanced: 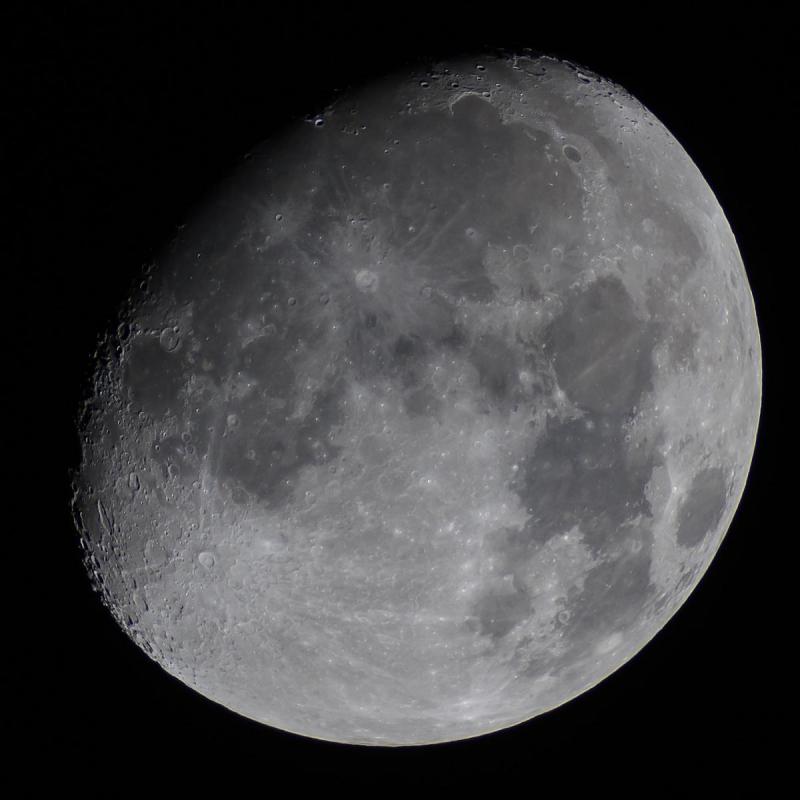 It seems that false color is very well controlled.

I will treat it as a mystery lens...

thank you for your reply.

I like your moon shot. Lots of potential in your mystery lens for sure. It's not always a name that makes a telescope stand out from the rest.

The only original here is the eyepiece that looks like Emil Busch, Rathenow. The lens, brass tube and focuser looks like put together from bought parts.

But a nice looking scope anyway!

The only original here is the eyepiece that looks like Emil Busch, Rathenow. The lens, brass tube and focuser looks like put together from bought parts.

But a nice looking scope anyway!

Thank you for your information! Now I was able to find this posting in a german forum, which proves you are right: http://www.astrotref...chpage=3#772112

oh well, I was at my late friends house, helping the widow sorting through stuff, looking for something completely different, when I stumbled across the lens cell of the AS!

I am not sure if I should try to remount the lens in the original cell, or keep it in the lens that either my friend (a master optician) or the work colleague he got the telescope from had machined. I am not sure, if the cell is missing a retaining ring, or if the lens is held in place by the collimation screws alone.

You are also right that the lens was origially uncoated, another friend told me that the late optician had it coated at the place he worked. I am not sure if this helps with the lens historic value, but it sure helps with light throughput.

The former owner took this telescope to Turkey in 2006 to take some very nice photos of the total solar eclipse. 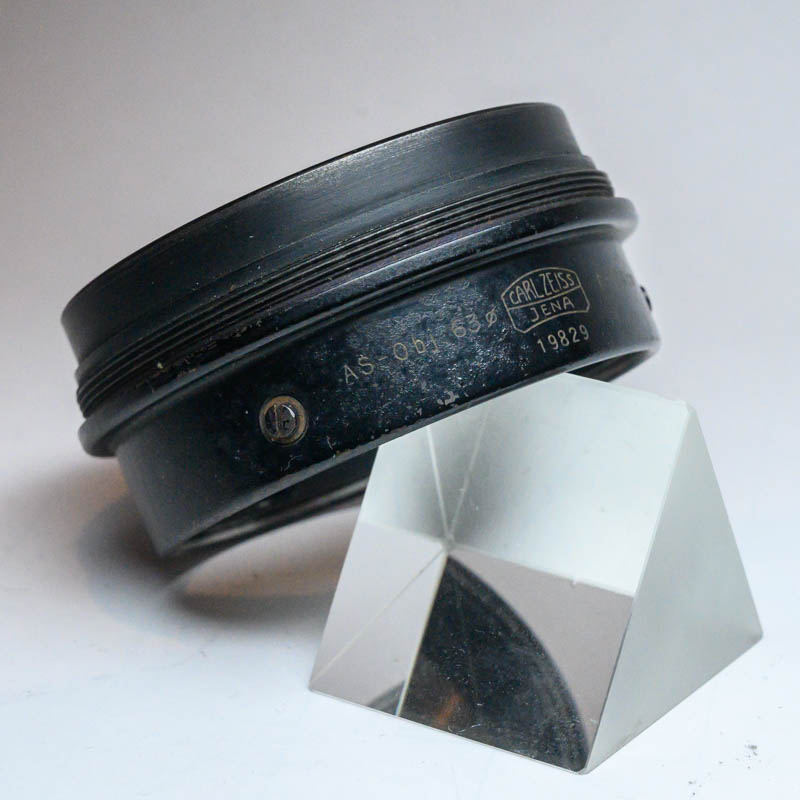 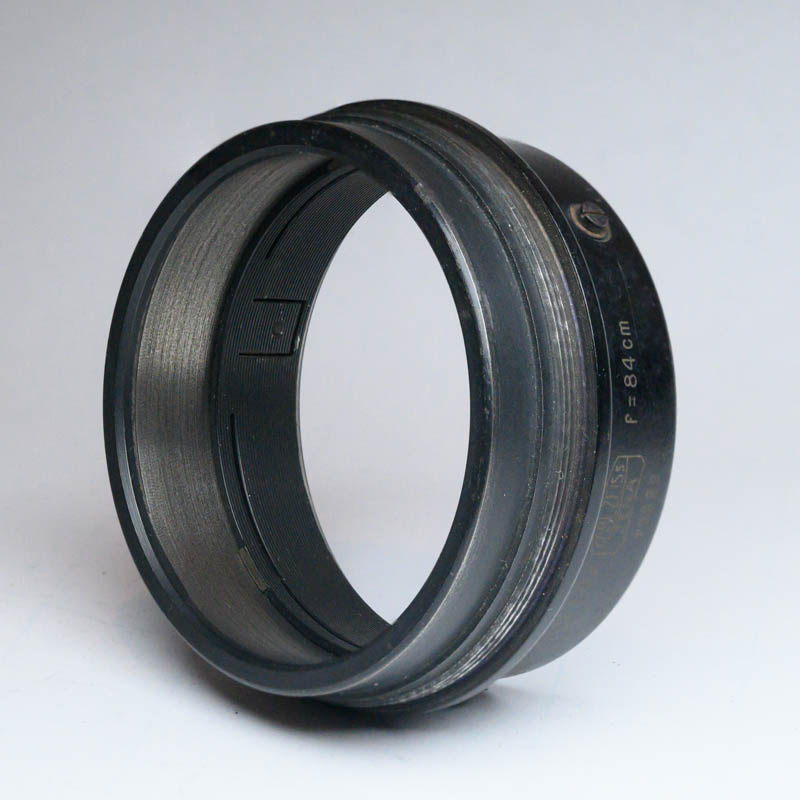 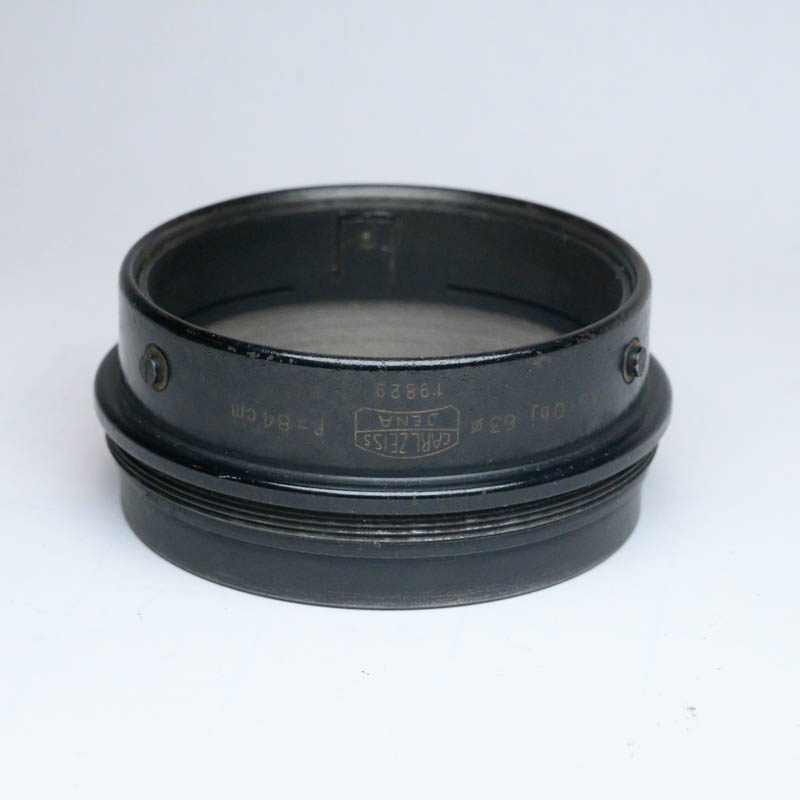 put the lens back in the cell.  Worth much more in that form.  It is not worth much the way it is mounted now.

I would put it in that cell and then re-attach it to the scope or make another scope if it can't be made to fit.

BTW, what's up with the tiny focus knob and its works? Is it a homemade pinion?

As far as I know the AS is an air spaced doublet, and the elements would need re-entering, and I definitely know, that my late friend was a master optician, and I am not. He had an optical bench, including interferon enters.

And I am not sure if the lens cell is missing a retaining ring, or if it is really held in place by the centering screws alone.

Yes, the original cell increases the value, but I fear that it might decrease performance.

The screws are for attaching the lens to the tube, you are missing the retaining ring, unless it's in the new cell.

Found this thread. My guesstimate for your lens cell would be mid to late 1950's. Serial numbers on attached metal plate starting in the early 1960's. Original tubing for your lens cell also pictured in link above. Flaking paint a big issue.

thanks to Stefan and sdedalus83 for the hints and pictures. 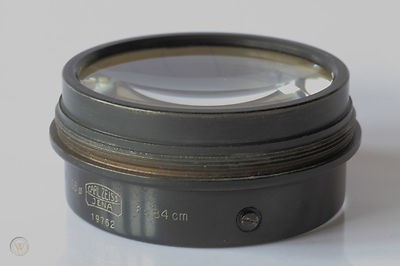 it actually looks to me that the back of the lens is not missing a ring. 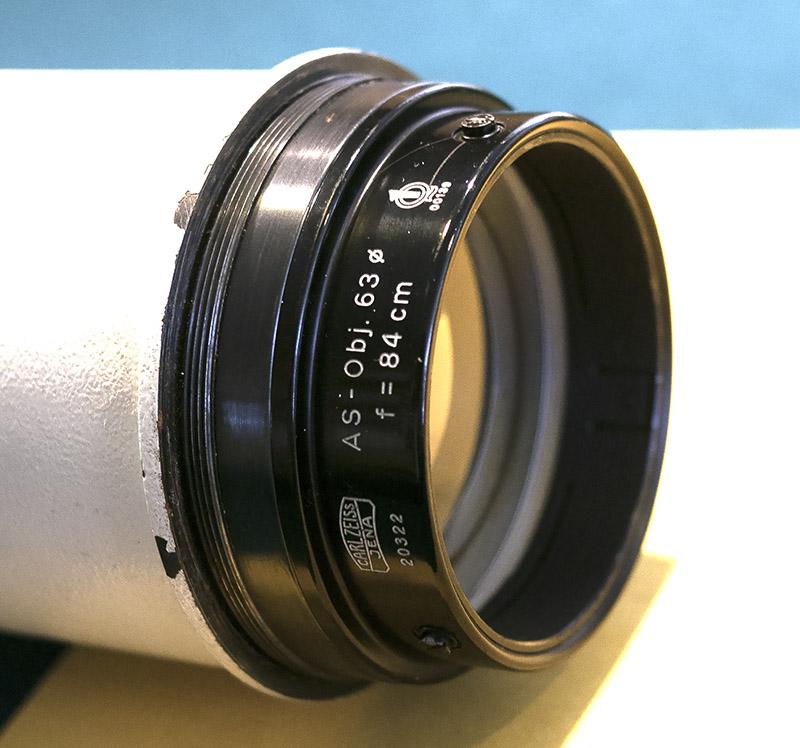 The front seems also complete. What I assumed are the collimation screws seem to be the screws that hold the front ring in place, and I guess this is the retaining ring? Then it also makes sense, that the widest part of the cell is actuall behind the grooved ring. 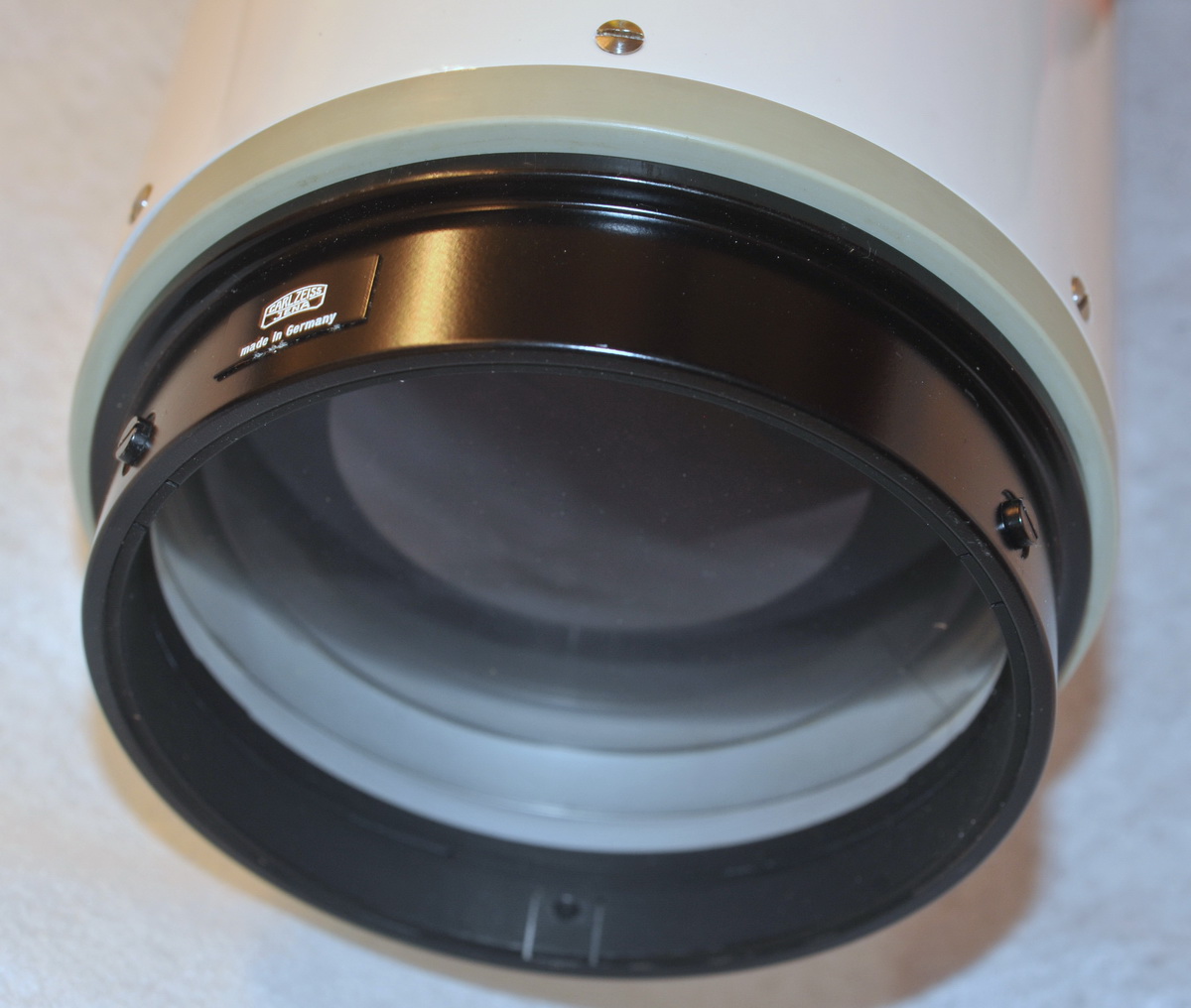 next I will try to unscrew the grooved ring from the cell to see if my theory holds.

Yesterday I sent an e-mail to the Zeiss Archive for information about the serial number and the cell, I just got the response.

The scope was made in 1948 and this is how the cell works:

I might have a Zeiss tube that lens will fit on.  PM me if you are interested.

This week a friend and mine took the mystery scope out at night, not under the stars - as it was cloudy, but the local cable car station provides some nice artificial stars in the form of strong LED lamps a few kilometers away 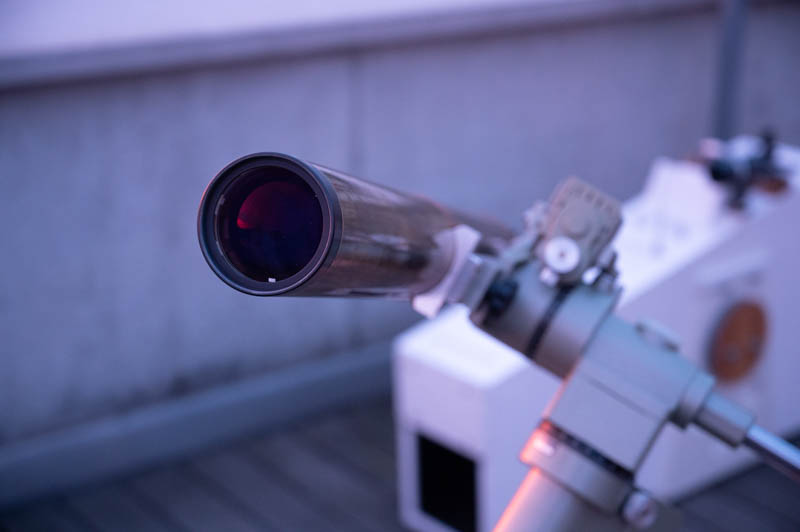 The Zeiss AS in the brass tube. 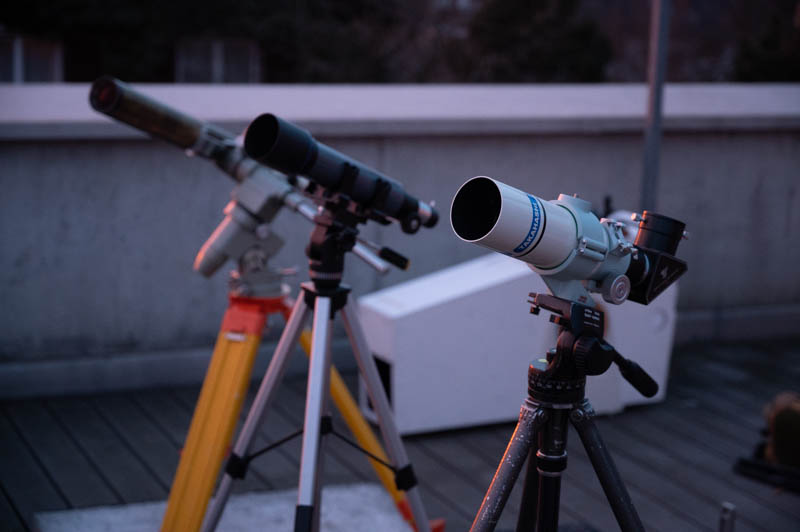 Some other contenders: a 60mm f/7 achromat (Eschenbach Novalux 415 in a self-built tube) and a Takahashi FS-60 (in the background is a 200mm tetra-Schiefspiegler) 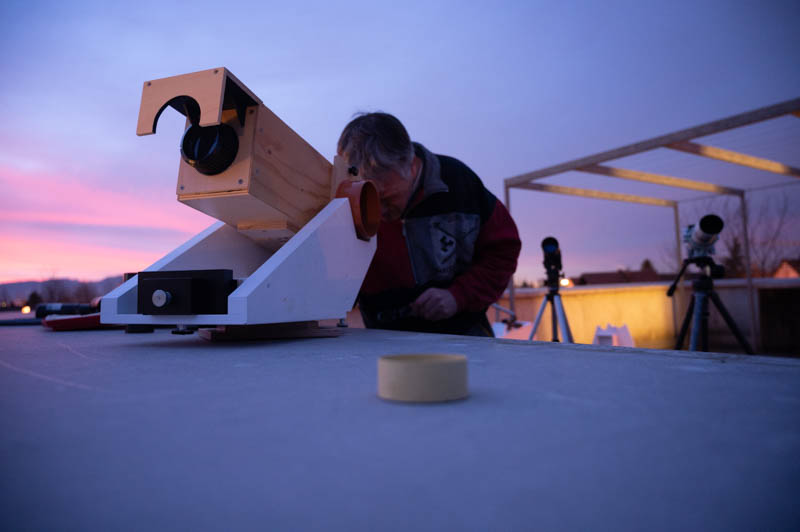 The fourth scope, a japanese achromat re-figured by my friend 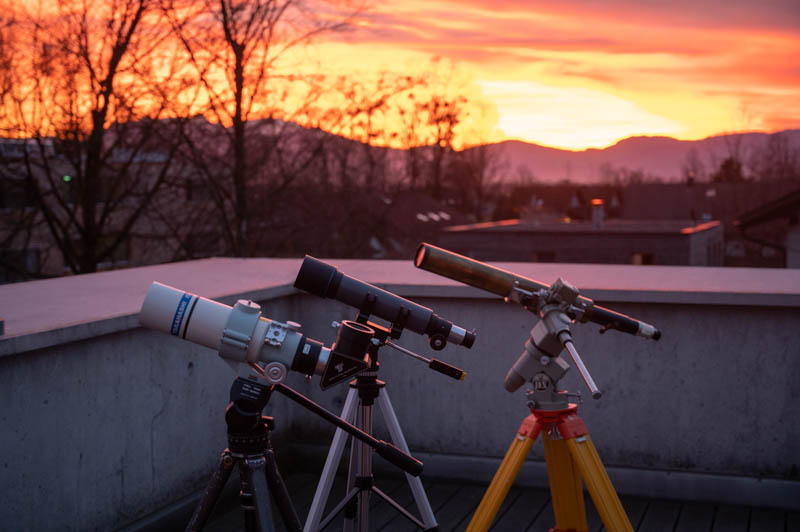 The sunset proved to be spectacular. 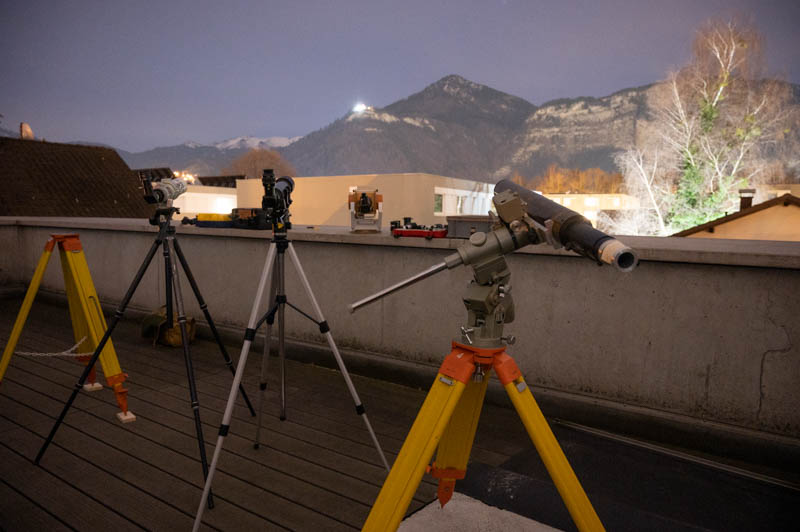 The bright light is the station of the cable car.

Both achromats showed fine views at lower magnifications, but at higher magnifications secondary color became an issue. Much more so with my 60mm f/7 compared to my friends re-figured 60mm f/10. The f7 showed a prominent blue halo when in focus.

The Tak showed the slightest hint of color when in focus, but the image was cleaner in the f/13.8 AS lens, even at higher magnification.

But the problems with the Tube remain, one can only get into focus without a diagonal, and re-mounting the lens in the original cell probably means destroying the careful centering done by the former owner. And the loose distance spacer does not seem to be a big problem in the custom machined cell, but I fear miscollimation when one re-mounts the lens in the original cell.

This scope is a testament to your late fiend and to his skill as an optician. You have the original cell if someone feels that makes it t more valuable.

This scope is a testament to your late fiend and to his skill as an optician. You have the original cell if someone feels that makes it t more valuable.


This is more or less what my Co-observer suggested. I will try to do some lunar and planetary imaging and then offer it as you proposed, including original cell, story and all.

Phil, you mentioned a cable car and I see snow-capped mountains. You are based in Innsbruck/Austria? I just returned from a three day trip to visit my son and they have a cable car.

no I live near Bregenz, Vorarlberg and the pictures were taken in Dornbirn, Vorarlberg,

I hope you had a nice trip!