The February 2020 Challenge is now open. The target is (IC 342) The Hidden Galaxy. To reduce the number of stickies, please submit your entry to this thread.

To increase participation over such a diverse group, the winner will be selected by random drawing. Please feel free to start a thread requesting guidance on your entry prior to submitting it, the whole purpose of this challenge is to learn and compare on a common target. Entries must be submitted by midnight eastern time on February 29, and I will try to announce the winner early in March.

One of the few targets I've actually gotten this winter!

Spent a lot of time on it over last 2 months or so, knew it was a difficult target. Rescaled and compressed for this post, better picture on Astrobin of course.

This picture was taken on 2/12/20 with the ASI183mm-pro, using an 8" f/4 reflector as the telescope, and a guided CEM-60 mount.    30 second subs at 160 gain and -15C, at binx2  R(96),G(78),B(50) for about 2 hours of integration.  Stacked in DSS, and developed  in Star Tools and Gimp.  The binx2 was selected to reduce  the exposure time and hopefully get  smaller stars.  In the past, this combination of telescope and camera had resulted in some bloated  stars at binx1.  This was  likely caused  by seeing and guiding that were not up to the image scale.  The star  size was reduced about 30% from recent results by using binx2.  Under ideal conditions, binx1 would produce much better resolution.

I finally had a chance to capture the "Hidden Galaxy" in Camelopardalis constellation a few days ago. This bright and relatively large galaxy lies in the same direction as the plane of our Milky Way. As a result, despite its intrinsic brightness, it is very faint and hard to capture for us on earth. It is in the local group of galaxies with an estimated distance from us of ~7 to 11 million light years. When I took an image of it on Feb 13, 2020 with over 200 minutes of imaging time, it was still quite faint and hard to pull out of the background. So, I had to stretch the image a lot to get the result presented below : 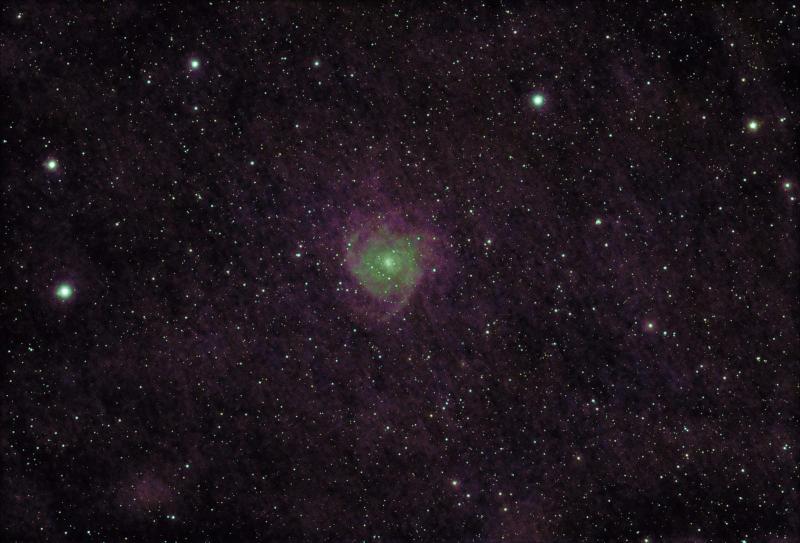 Clouds rolled in after ~ 3.2 hours of imaging and had to stop.

Post processing in StarTools - minimally cropped and then binned 2x2 to get better SNR,

I hope you like my attempt at this faint target ...... Anil 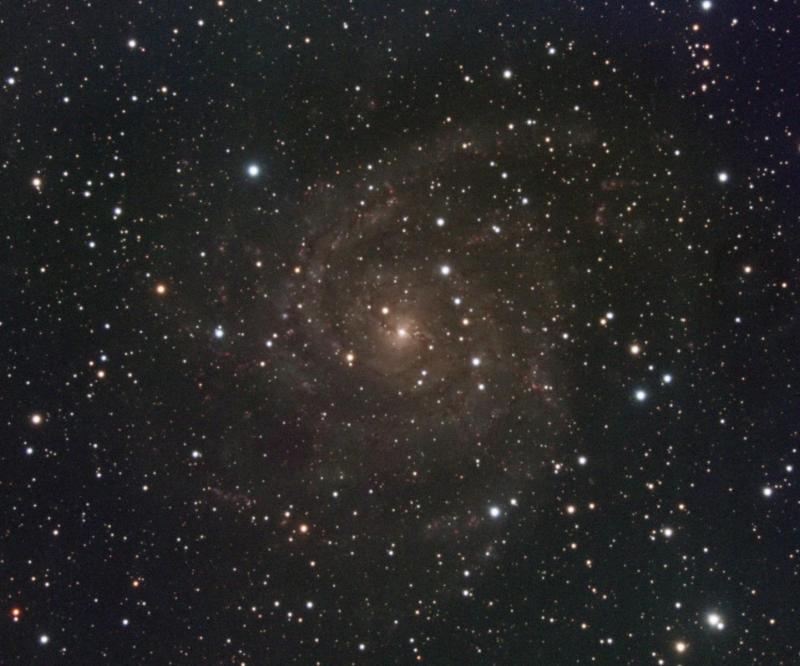 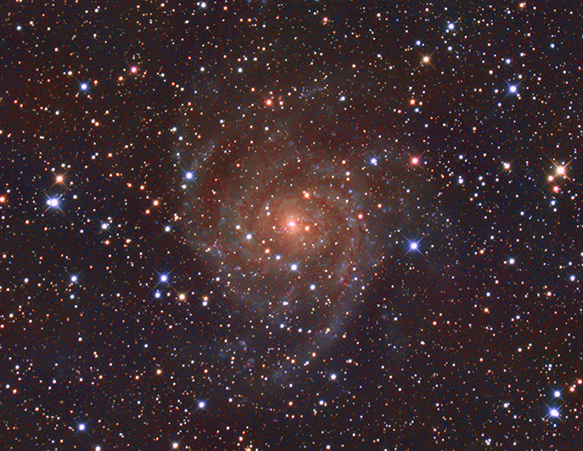 Probably a target I would have overlooked had it not been for the imaging challenge, thanks for choosing it.

I am still imaging with my GT71 so this is relatively wide field although it has been cropped. I found this a challenging subject, quite dim, made more difficult by strong moonlight during the initial imaging nights and thus requiring lots of data.

For those not wishing to click on the link: 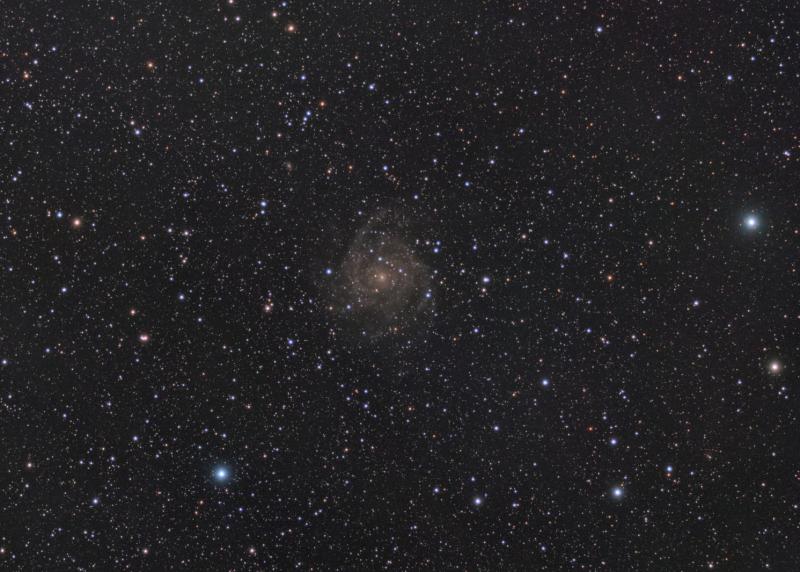 Another challenging challenge... oh my.

Quickie last night 2/16 under the first clear sky in what seems like months.

Again,  not enough clear nights, weather forecast does not look very promising too

…..so very little data , resulted in a lot off  noise, difficult to reduce, but a good learning experience,so I learned a few new things

…
Need to revisit this target for sure…

A mere 10 million light years distant, the Hidden Galaxy (IC 342) would be a prominent galaxy in our night sky if not for the veil of stars, gas, and dust clouds along the plane of our own Milky Way. 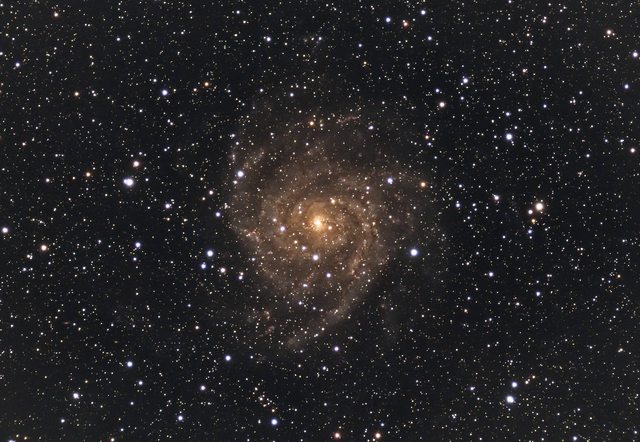 Captured in NINA, processed in PixInsight.

To say this was a difficult target is an understatement. Just getting it in frame was challenging.

(Honestly I was just glad to get anything on frame)

Despite a relentless parade of operator errors, I actually got enough data to put together an image of this target.

So, not one of my better images, but the target is definitely there...

This is the result of 2 nights' work, both with so-so seeing and transparency and Bortle 6 skies.  The first night netted about 100 subs, 20 seconds each, ending when the Moon rose to make a mess of things.  The second night, 2 weeks later, added another 200 subs.  Total integration time was 1hr 40 min.  We have clouds forecast for the end of the week, with a night of bad transparency before that.  Ideally I need to at least double or triple the integration time, and that's not happening.  So, I'm calling it here.  Hope for better weather next month.

I am finding that the new scope is much more sensitive to temperature changing focus, or perhaps the focuser is slipping.  Something is moving.  The old Newtonian had its own quirks and problems, but this wasn't one.  You can see the change in focus from first sub to the last during even one hour of imaging, and it is clearly visible in the resulting stack.  This will add another challenge to the imaging plan, either in process or equipment, or both.

One other operational note, for those who have their scopes on carts.  Ground your cart!  It's not so much for safety, though that's never a bad idea.  It's for ESD (Electrostatic Discharge).  About halfway into the second imaging night, I got up from my chair to trigger the Intervalometer for the next set of subs.  Touched the mount, and felt a small shock.  Little spark.  No big deal.  Started the imager running, and sat down.  Then I noticed that the PHD2 graph had stopped.  Apparently the zap had caused the guide camera to lock up.  After fussing with it for a few minutes, I eventually had to reboot the computer (a Raspberry Pi, so not a huge deal).  Lost about a dozen or two subs in the process.  Now adding a step to touch the physical ground before touching the scope...

Stacked with Sequator, processed with StarTools 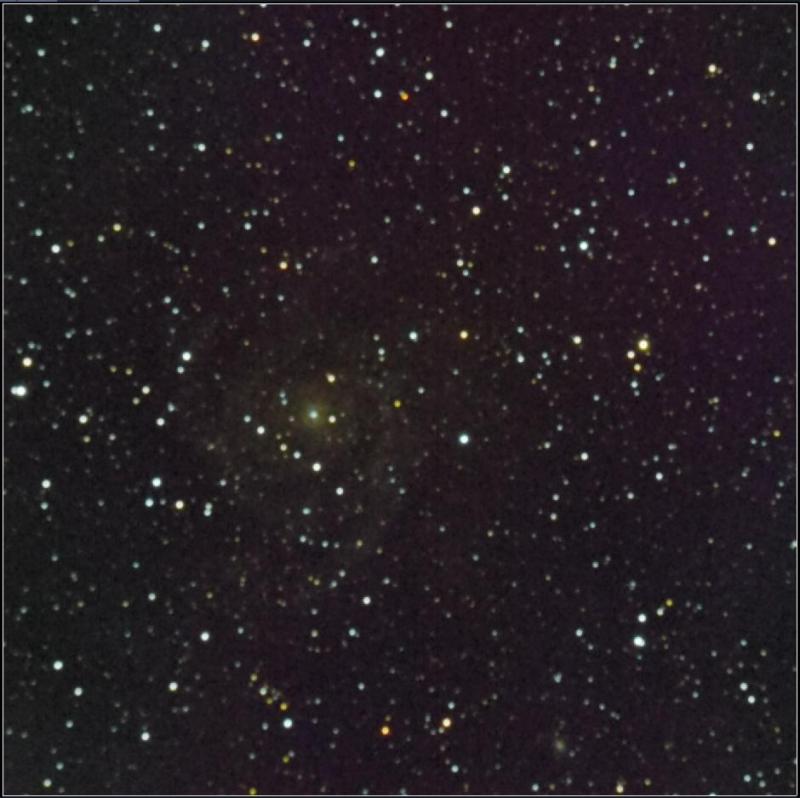 You really did a great job on this one. The extra FL added some really nice resolution. The dust lanes are nicely visible.

Great work on IC 342 you pulled some great detail!

Looking forward to your selection for March.

You really did a great job on this one. The extra FL added some really nice resolution. The dust lanes are nicely visible.

Well thank you very much. It was a difficult target with the many cloudy nights.

My selection for March is IC 410, Tadpole Nebula. A great wide view target and very interesting up close. This target should be in reach for nearly everyone.