By the way, not knocking anyone for their choice of telescopes.  The Taks are obviously one of the most well made scopes in the entire world.  I simply prefer SCTs and being the cheapskate that I am, I will stick with chopped liver!

Then you should love the DX8

here is best I did with my dx8 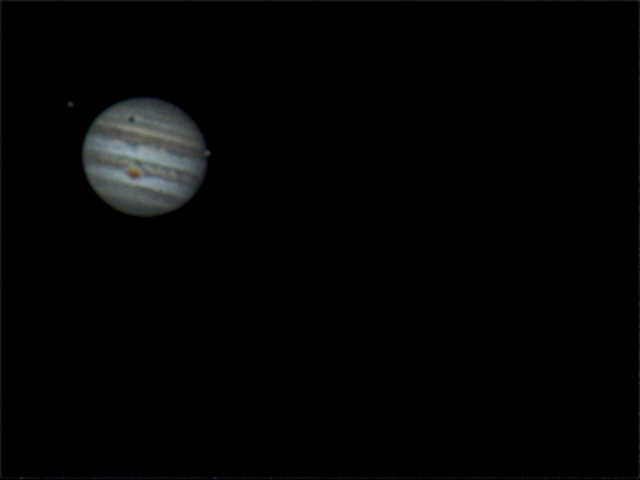 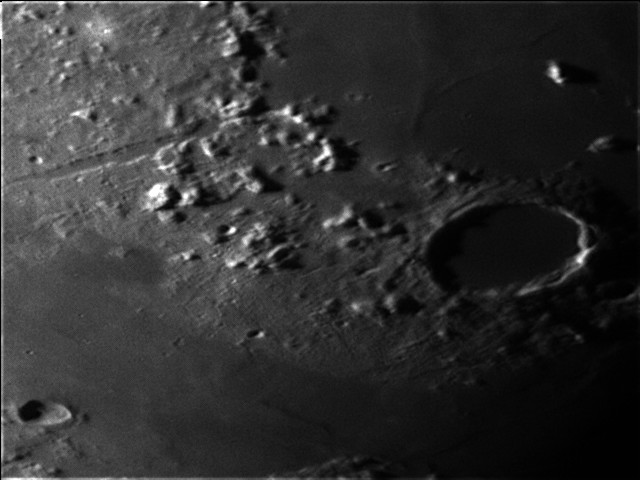 Not bad images at all.  Jupiter is pretty impressive.  Nice work!

scope is not great but usable

if you don't push to hard its ok

however I also have orange c8 from about same period

and it just kills dx8

here is some shots 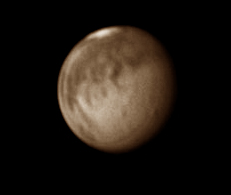 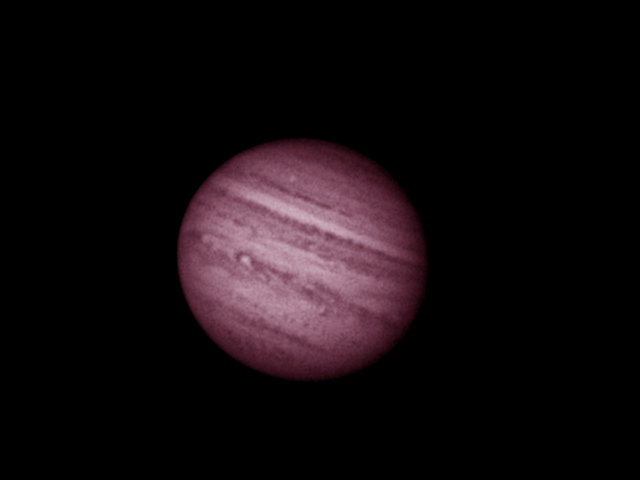 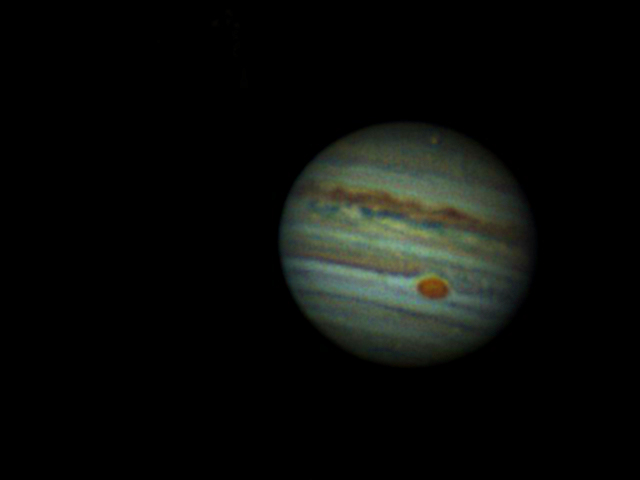 There’s a diff between mo, and mo betta! Some prefer fine wine to chopped liver.

It’s fine to talk about angular resolution and per millimeter of aperture, but to me a great big fuzzy image is not necessarily better resolution. Just because something that has 2000mm of aperture is producing an image, if it’s a blur, that doesn’t make it better. JWs image of the moon, shown above that was produced with his DX8 is a hot mess, and every DPAC image from I’ve seen on here that came from a DX8 is too. Taken together, along with pages and pages of personal observations in this forum made by dissatisfied owners is more than enough anecdotal evidence to convince me that anything else is a steaming pile of h.s.

As far as long achros go, they produce very nice images but there IS color once the aperture gets up to 3” and it increases incrementally beyond that, EVEN at F15. Even tho it’s slight to notice it is causing some loss of energy and a very subtile blur in the image. I’ve had a 3” F17 Goto, a 3” F16 Unitron, a 3” F15 Sears, a 4” F15 Unitron, and a 4” F15 Edmund. You put it up against an excellent apo of the same aperture and you will notice a difference in sharpness and color saturation and fidelity under optimum seeing conditions. And an F8 apo is easier to pick up, carry around, mount, and store than an F16 apo. That’s why I got rid my long achromats that were above 63mm in aperture, and if it wasn’t for my desire to have a very modest collection of well made long achromats, those would go too. There is a reason for progress and there’s a reason for nostalgia; I appreciate both but I don’t ‘blur’ the distinction. And yes, I concede that taste And aesthetics enters into one’s decision as well, along with practicality and budget. Japanese apos do cost more; not necessarily 10X more and not when you sell of several classic achromats to pay for them. I hesitated ‘going apo’ for a long time, but in doing so, I cut my number of telescopes down to a third of what it was and I have no regrets about that. To each his or her own.

Everyone has their preferences and their viewing pleasures.  I certainly can understand the appeal of having AND using a high quality instrument like a Tak 60mm or a Tak 76mm.  It is the Shelby Cobra of the viewing world.  I wouldn't trade my Shelby Cobra for any other vehicle in the world.  As far as observing though I'm not into astrophotography and I'm not enamored with planetary observations.  Occasionally I like to get the C14 out and do some running around Jupiter and Saturn.  Same for my C8.  The images that are put up with some of the old Japanese refractors are truly a nice sight to behold and it makes one appreciate the quality of fine glass and outstanding workmanship.

But being a tightwad, as I am, I look for deals.  If I can see M-42 decently through this scope and get a nice view of a few galaxies or the ring and North American Nebula, I'll be happy. I enjoy viewing globulars as well and this might be something that can pull them in.  Hopefully the tracking system is decent on this scope.

If not, its a neat display piece for one of the rooms in the house.  I can always use the tripod for other scopes as well!

I wish my nice new pretty DX8 would show any DS objects as more than a fuzzy blur.  No detail AT ALL.  Can't even tell what it is you're looking at.    The older dark grey one is good below 170X but that's still awful for an 8 inch scope.

Hopefull the Celestron optics will be able to fit into a DX8 tube with a little persuasion.

Isn't the mirror in the C8 almost an inch further back from the corrector than in the DX8?

There will be spacing issues.  I may have to abandon the focusing hardware and go with an external focuser,  I'm also not averse to lenthening the tube.   But it's premature to even discuss my project yet.  It will be later this year, at the soonest.  I'll start a thread when I begin.  Either it will work, or it won't.  If it doesn't, then I'll refigure the optics when I retire.

Sounds like a cool project Chuck, and the external focuser will be big plus if you ask me. I don’t know why that was never done to begin with. No more mirror shift, fixed focal length, etc! I look forward to watching your project progress once you get it going.

the good news it fits (after cork removal)

note: what i did not do was just swap out corrector plate  and use original dx8 secondary 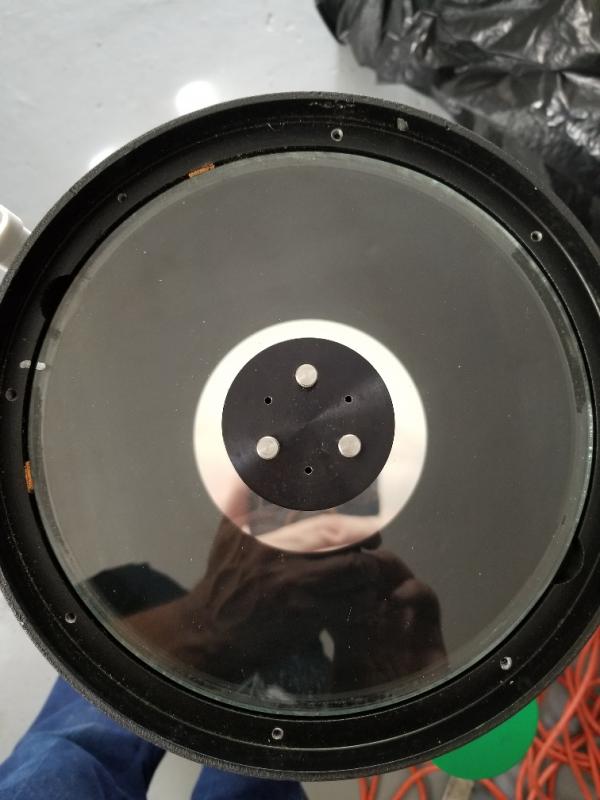 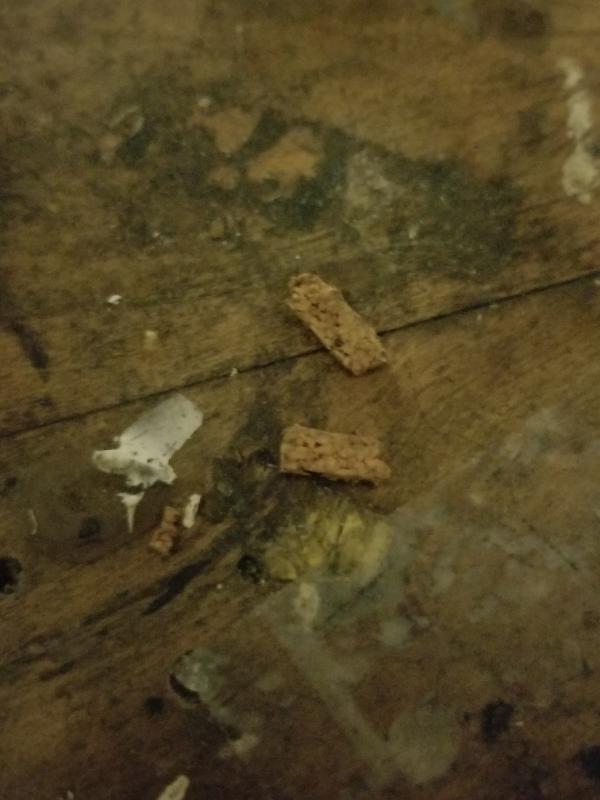 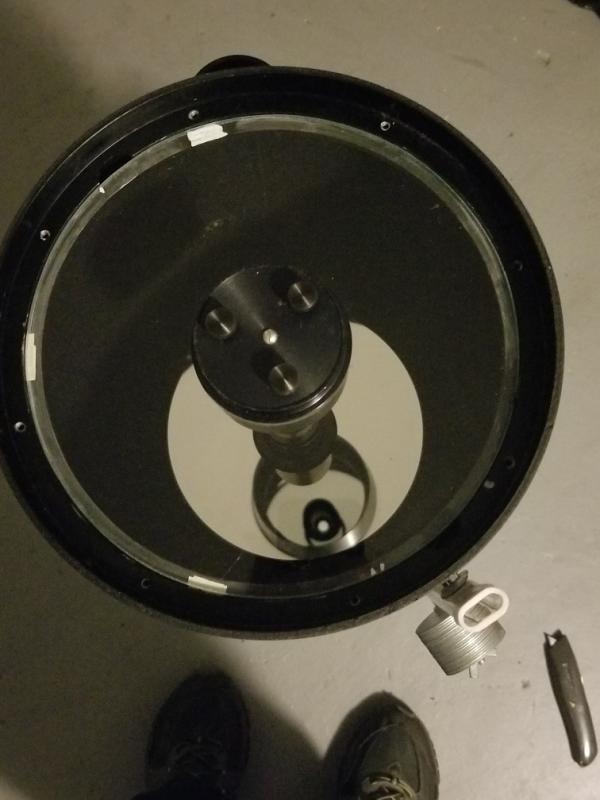 I plan to use the entire Celestron optical train.  The more I think about it, lengthening the tube might be the best way to do it.

above was mentioned about lengthening the tube

here is estimate of c8 (original not HD) and dx8 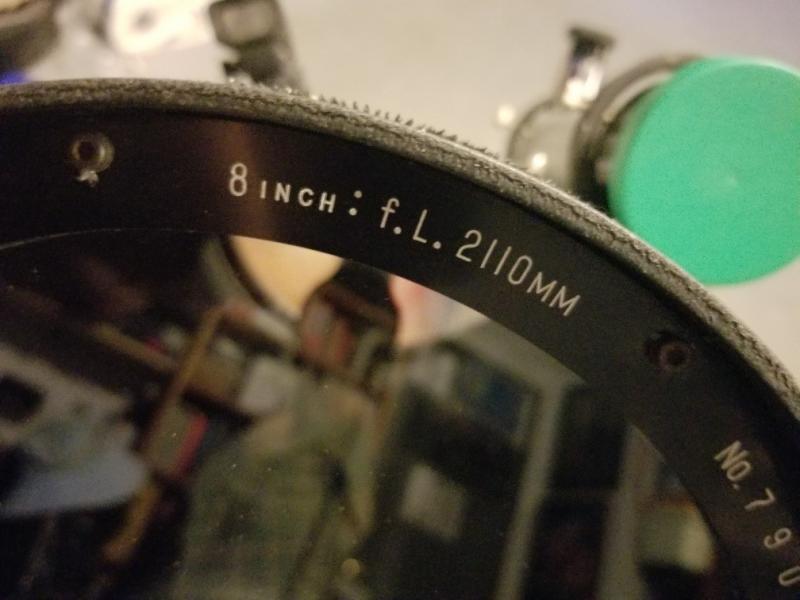 c8 is about 12 inch from mirror to corrector 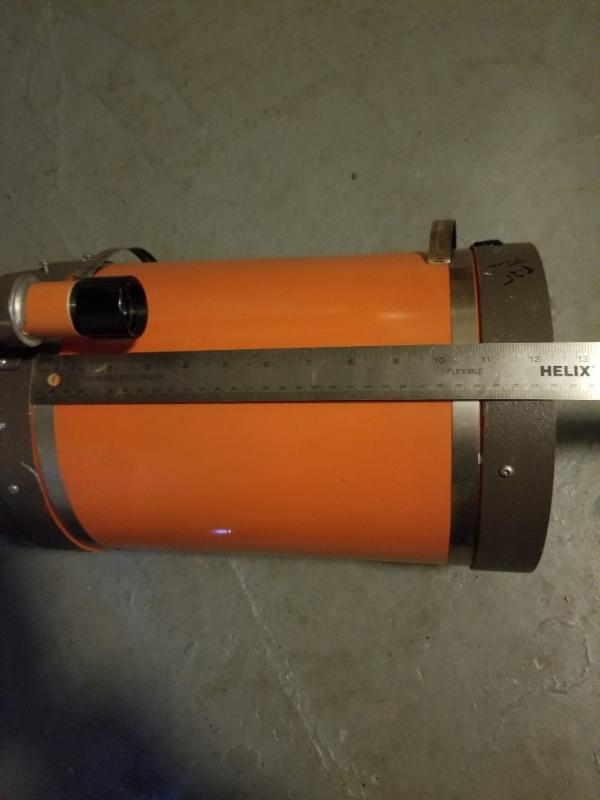 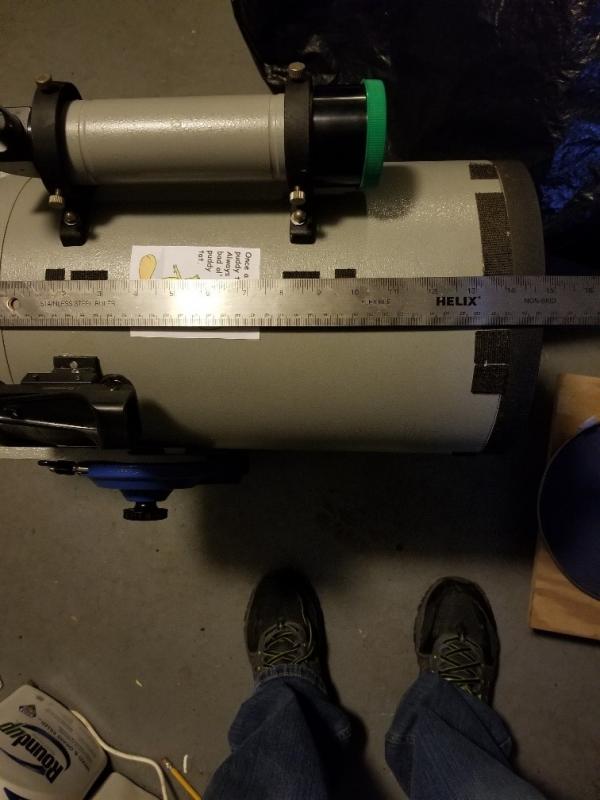 what DAVIDG is doing  is the most pure solution

changing a corrector I can accept so some extent

So, one gets a built in 2.25”, built in dew shield with the Celestron optics buried in the DX8 tube.

You have to replace all the glass ‘guts’ from a matching system, not just whats on top.