In the current IC 443 thread, there was a sidetrack into the usefulness of the H-Beta filter. It seemed more appropriate as a separate thread in its own right, so here it is.

Some of us old-timers may remember Lumicon advertising referring to H-Beta filter as "the HorseHead filter". And probably a lot of us bought it based on that alone. I know I was one of them!

David Knisely published a list of other nebula where the H-Beta filter works. I suppose "works" is defined by Expectations, going down the list I had some nice successes and some so/so results where O-III or UHC was more revealing. In fact, I sold my H-Beta (and the others) to consolidate on the DGM NPB filter. But who knows, I may find reason to try it again

What observations have you made with the H-Beta, and what were your impressions? Which objects in the "Knisely Catalog" are the H-Beta Stars? To get the party started, my logged H-Beta specific observations:

I just picked up the TV H-Beta - yep, for the Horsehead.  But I also wanted to try it out on other objects and with binoculars.  Now all I need is some clear, dark skies...

Strange that you have NGC 6888 as negative for both OIII and H-Beta.  This one is known to respond well to OIII since it has a bright OIII shell ejected by the a Wolf-Rayet star.  Knisely shows it as strongest in that, 5 vs. 4 for UHC.  When I most recently logged it I was using an NPB and didn't have an OIII since my old OIII was somewhat "rusted".  I don't believe I tried H-Beta.  I am sure I have checked it some since with a newer OIII.

I have only observed Sh2-84 in the 20" with 16T5 and Farpoint UHC filter.  "Surprisingly large and bright patch of emission nebulae between 7 and 8 mag stars.  Extends in long arc.  Thick, extends to east curling past dimmer star."  I was expecting something smaller.  Could probably target with 20T5 and H-Beta for comparison since I lack a functional 1.25" H-Beta.

Similarly I didn't check Sh2-88 with H-Beta.  It was near the end of a session and the notes were sparse:  "Somewhat easier to see with an Ultrablock and 31T5.  Had to pan to really take it in, much is AV."  Not sure if I tried H-Beta.  I had used the H-Beta earlier on Sh2-86, which helped better define the dark lanes than the Ultrablock did--had the same impression with the OIII which is interesting.

I don't have my observations digitally recorded by filter type, and although I record which filters were used to some extent, it is primarily the one that I used most for the target, rather than saying what did not work as well.  While nebula observing is not a primary activity for me, I have gone through most of Knisely's H-Beta list in the past.

Sh2-84 in Sagitta: A possible Wolf-Rayet nebula associated(?) with WR 128. Arc through the OIII and H-Beta, otherwise faint through the UHC on my 6" refractor.

There are a few more such faint Sharpless nebulae north off Sh2-88 for the H-Beta filters.

Just curious...how do you use 2" filters in larger binoculars?

Just curious...how do you use 2" filters in larger binoculars?

I screw the 1.25" filters nto the filter threads on the binocular eyepieces, or fasten the filters with added rubber eyeguards, 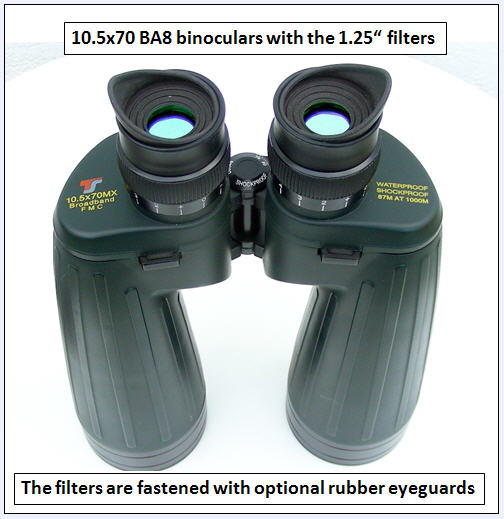 There is a saying, get it screwed,

I see...I've always stuck them on the front.


Also tagged with one or more of these keywords: dso