Increasing etendue by collapsing a dobsonian

I am not an optical engineer, so I'm sure others could give you better explanations, but your green lines will never come to focus - as you have shown. Only parallel rays will return to the focal point. Other angles that hit the mirror will decrease contrast. They just light up the tube and the mirror... If you have a telescope, you can see this for yourself. Any light hitting the mirror not parallel to the optical axis of the primary will cause issues - shine a flashlight in there and you will see...

The green lines in his drawing define the rays at one edge of the field, and they definitely DO come to focus on the focal PLANE.

What was confusing the OP was that he though lowering the top shortened the focal length of the scope.  It doesn't.  Binovewers eat up a lot of light path in the prisms, so they require the focal plane of the scope be a lot farther out from the tube in order to focus.

Lowering the top achieves just that--moves the focal plane farther out from the scope.

I was most definitely wrong when I said only rays parallel to the optical axis made it to the eyepiece.  So...any light incoming that makes it to the front surface of the mirror will form the focal plane and be magnified by the eyepiece?  If I'm not mistaken, I thought the OP was also asking if more usable light would get to the eyepiece if the tube was shorter because of the rays coming in off-axis.  Sorry if I misunderstood...

Thanks everyone, that gave me a lot of focus on what I didn't know.

And after a bit of playing with the simulator and drawing stuff I understand what makes an image in focus. Each point of the object emits light rays in a sphere. The aperture grabs a cone of that light, let's say 1%, and the optic focuses that cone back into a point at the focal distance. Each points that the telescope sees form the focal plane.

And in fact this plane is curved which explains why SCT use corrector plate, it's not really for our eyeballs, it's for imaging: the CCD chip is flat so the edge of the sensor plane is not intersecting with the curved focal plane. Our retina probably does a better job at matching the curvature of that "plane".

Is this how Ritchey Chretien does it? Two non spherical mirror cancel out each others' curvature to flatten the focal plane?

There is a formula somewhere that tells you what the theoretical size of the focal plane is, but in practice it is the design of the telescope that determines the size of the user accessible focal plane.

Earlier, I mentioned that a typical Newtonian designed for visual use will typically have a 10mm fully illuminated circle.  Inside this circle, the user gets access to the full aperture of the telescope and anything inside that circle is seen at 100% brightness.

Outside of that circle, you still see a field, but it is very slightly vignetted, meaning you are not using the full aperture of the telescope, but unless the illumination falls off sharply the difference in brightness is difficult to see.

What defines the maximum size of the field (the most field the user can access) is the field stop size of the eyepiece and the point where the illumination falloff becomes objectionable.

For example, you could use a 56mm Plossl with an f/5 telescope, but the illumination falloff would probably be intrusive,  Some people would say that you can't use a 56mm eyepiece in an f/5 telescope becuase the exit pupil would be to big, but that does not stop you from using a 56mm eyepiece to get a wider field of view.  The aggressive illumination falloff near the edge of the field though would probably give the field an unpleasant look.

So, there is a theoretical number for the maximum field of an instrument, but in practice, you have to use the amount of field that the observer could actually utilize and this is typically less than the formula value.

I'm one of those people, outer vignetting doesn't bother me, with 2" glass, what I notice however is how this one 100 degree 22mm 2" shows so much of the secondary's shadow. 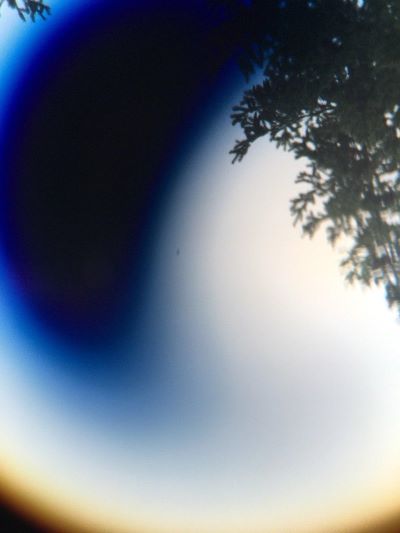 Almost all Newtonians are f/5, are there f/2 or f/1 commercially?

Honestly, no snark was meant. I was just using the terms for lighting. The term ‘entendue’ is not widely known, so I thought that if you knew that term, you were familiar with the subject.

Two pi steradians is the angular region enclosed by a hemisphere.
If the hemisphere is uniformly illuminated, then the brightness of the cone of light, where the eyepiece goes, won’t change no matter how the mirror spacing is.
If the hemisphere is not uniformly illuminated, then you might gain brightness as the mirror distance changes.
But only 1 specific distance between the mirrors will give you an image at the eyepiece position, when the object being viewed is at infinity - as astronomical objects are.
If the mirrors aren’t at that specific distance, then your optical system is simply a ‘light bucket’. You’re catching photons, but you’re not forming an image where the eyepiece goes.

Now I think I get you: you talk like a mathematicians, in propositions, like a theorem, I just need to read you slowly. Nah etendue is just french and the math is simple.

So I was visualizing that luminance structure you're talking about and it became 3D which reminded me of a diagram I saw a while back on how the light field cameras work, the Lytro. Each tiny sensor captures a small image behind its own micro lense, somehow they process the image to deduct a new image at different focal planes. It smells like a hologram or some slit experiment, where light suddenly shows a different facet of its nature so maybe there are other ways to "see" things. Could a blurry light bucket be turned into a telescope with a light field camera?

I'm one of those people, outer vignetting doesn't bother me, with 2" glass, what I notice however is how this one 100 degree 22mm 2" shows so much of the secondary's shadow.

That's not the secondary shadow. Look up "kidney beaning" in eyepieces.

That's not the secondary shadow. Look up "kidney beaning" in eyepieces.

What causes that? ... alright thanks for the search term... more reading